We’re probably not required to tell you that Snooker 19 is a snooker simulation but it is and it comes to us from Leamington Spa-based indie studio Lab42 who have a mobile and porting based softography behind them but are now trying their hand and simulation of the relaxing sport of snooker.

Snooker 19 is a mid-priced retail release (which comes in physical and digital forms) and aims (bLOLf!) to be the most complete simulation of snooker yet by marrying realistic physics with that official World Snooker license to become the FIFA of snooker games. Something it does with mixed results. 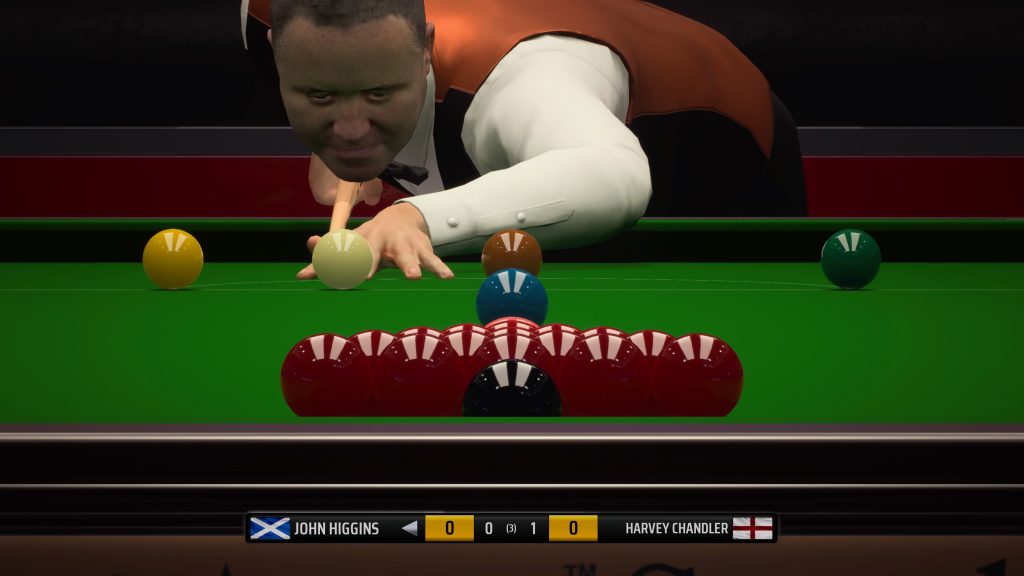 The comparison to FIFA might seem odd but it is apparent as soon as you see the main menu which eschews the usual lists of options and instead gives you those big rectangular panels that EA favour for their sports games. There aren’t too many options here though, just the usual career, quick match and online modes and a few settings.  A neat online edition is to be able to play along with real life tournaments (including the World Championships which are due to start soon) but you’ll be hoping for players with a sense of fair play of course.

We dived into the career mode first. This allows you to pick an established top pro with all of your favourites there to choose from such as Ronnie O’Sullivan, John Higgins and whoever else is famous in the sport these days. Or you can pick a low-level prospect and work your way through the amateur circuit first. We did that but were surprised that we couldn’t create our own pro. You do get some customisation options but these were incredibly limited and restrictive. For example, on our pro we could change the colour of his trousers but not his jacket, even though the menu suggested we could. Very odd. 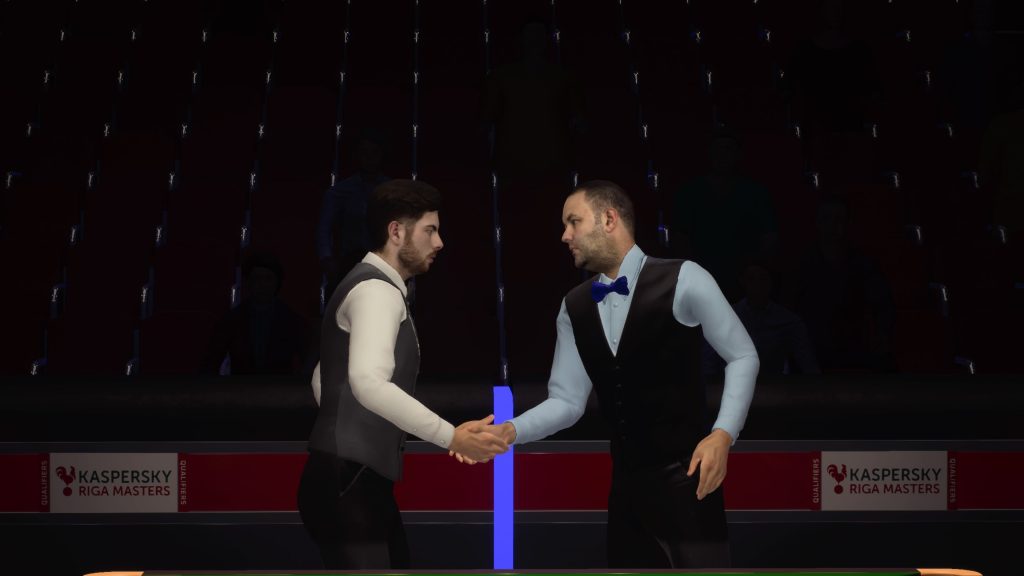 Once you get onto the green baize, things start off much as you’d expect. The game does give you a quick tutorial, explaining how to aim, shoot and put spin on your cue ball but beyond that you’re mainly on your own and left to compete.  The controls feel reasonably good but are a little fussy. You aim with the left stick and once you’ve set your direction and confirmed it with

, you use the right stick to set your target power, pressing

, again to lock that in. Then you pull the right stick back and push it forward to make the shot, making sure to stop within the target zone or else your accuracy will suffer. It’s the sort of system that’d work well in a golf game but maybe feels like it takes an extra step here and we often found ourselves attempting to do a shot while we were still in the power setting stage of the process.

You have four options in terms of aiming aids. Master gives you a little bit of aiming guidance but no white ball placement help, and there’s an option to turn off aiming assistance altogether (if you’re literally insane). In between are pro and amateur options which are so similar, we had to switch between them several times to tell the difference between.   Also, instead of the usual line leading off to the pocket, you get a thicker, transparent one here that fans out into a cone if you’re making a cut, offering less certainty.  It may be fair enough in terms of making the shot more difficult like it would be in real life but often the visual feedback you get makes the shot feel like you’ve got to hit and hope. 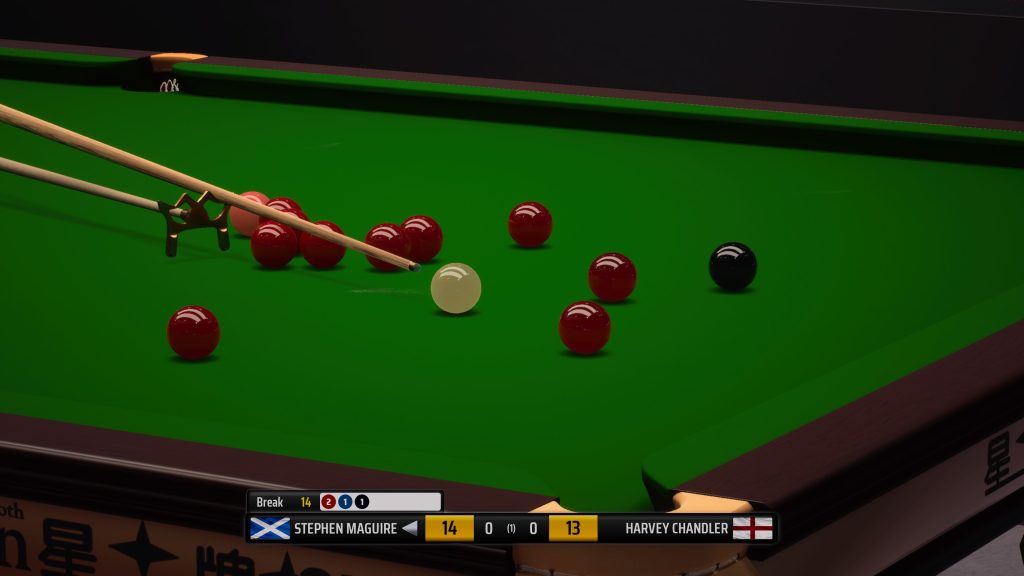 This is particularly true of shots along the cushion and also very short pots.  It just isn’t very helpful and to make matters worse, the two views you get sometimes seem to conflict.  So when you first line up a shot it looks perfect but then during the power phase of the shot it will look out and if you adjust there and go back to the first view it will clearly look like you’re going to miss the shot.   It’s just really sloppy and speaks to a lack of play-testing with normal people outside of the dev team.

What you don’t get is a nice easy option that really helps you to feel like a high level pro.  Pretty much every previous snooker game ever made has had that and didn’t suffer at all because the AI players were good and so it really felt like a battle of elite players. Where as in Snooker 19, it’s a lot harder to build breaks and therefore is less fun.  Hardcore players may applaud this decision but think of it like this.  Imagine playing Tony Hawk Pro Skater but instead of having the abilities of, say, Rodney Mullen you’ve now got the ability of you.  Or try playing FIFA but instead of having the close control of a Premier League player you now play like you in real life.  Yeah, those games wouldn’t be as fun and that’s the problem here.

This is mainly due to the aiming aid but it is not just that. Shockingly, there’s no overhead view which is a massive oversight for this type of game. Yes, we get it, real players can’t levitate over the table but even so, the angles you get in this game make it harder to judge shots. Moving the camera is possible but it turns off the aiming indicators and so is particularly useless.  If you look at the next pair of screenshots, you’ll see the two views you get with any sort of aiming assistance.  Good luck getting the 147 trophy with that vague level of assistance. 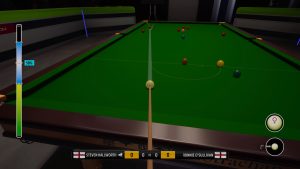 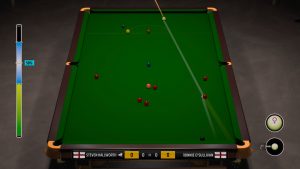 To compound this, the AI is prone to pulling out decent breaks quite easily and, at the higher levels of AI, nearly impossible to snooker (although some of the easier AI players can get completely stuck in a loop of poor snooker escapes). They are beatable for sure, but at the moment we feel like we’re not being given the best tools to compete and it is particularly galling because every other snooker game does including Snooker Nation Championship 2019 which also came out this week and offers about ten times the fun but for a quarter of the price.  This is an issue.  As is the fact that the AI players have none of the characteristics of their real life counterparts.  Don’t be expecting Ronnie to speed through a frame busting out left handed shots just for the fun of it.  Basically everyone here is just a face on a body.

Visually the game is a mixed bag too. Sure, the tables look perfectly fine with the colours popping thanks to the HDR support but the motion of the balls can be a little bit juddery, even on my PS Pro. Character models, while recognisable, are a little basic and ugly and the crowds are a little bit FIFA 2000 if you know what we mean, with the people all seemingly synchronised and a little unnatural, as if you’re playing in front of judgemental androids.  The game does model a whole year’s worth of venues including The Crucible and all the other ones but you’ll be wishing they put that effort into tightening up the gameplay.

The sound comprises of the various clacks of the balls and a very inconsistent commentary that fairly flatly describes the action but offers no real colour commentary.  A first week patch has gone live which removes some of the initial embarrassing errors though.  Indeed, Ripstone have committed to further patching and are being very responsive to criticism at the moment and so we’re feeling a little guilty about committing a score to Metacritic but on current form the game has issues. It does the basic stuff to the minimum acceptable standard but that’s about it. Yes, Snooker 19 simulates snooker and is playable enough but we were playing equally good, and better, snooker games over ten years ago and by now these games should be perfect. Unfortunately, Snooker 19 isn’t.

Cons
- Aiming options aren't good enough
- Controls are a little fiddly
- Character models aren't great
- A lack of an overhead camera may be an issue for some
- Can't move camera without losing aiming aids
- Poor commentary
- AI players don't have any real life traits
- Slow menus with no quick restart option
Summary
Snooker 19 does enough to be a snooker game, but not nearly enough to be THE snooker game. A lack of aiming and viewing options mean this may alienate players looking to participate in some relaxed break-building but are instead forced to remember just how poor at snooker they are in real life. And at four times the price of a competing snooker title released in the same week, this doesn't feel like a game we can recommend yet.