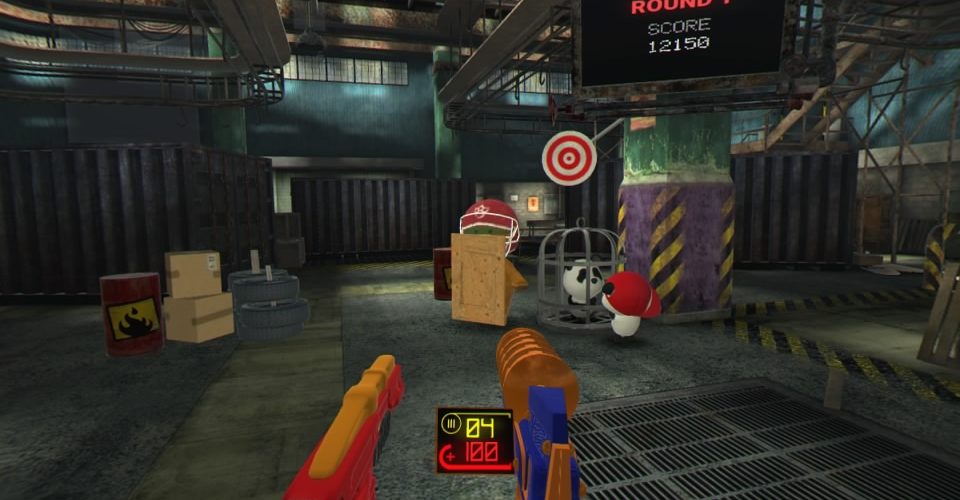 Sneaky Bears represents Irish VR coders Warducks’ first foray into the world of PSVR and while it’s not the first game to ever use the ‘teddy bears gone bad’ plot device and it’s far from being the first static shooting gallery type game on this platform, there is definitely something charming about shooter.

While you play as a faceless human, the star of the show here is Frank.  This teddy bear has taken over a toy factory and created an army of teddies in an effort to take over the world.  You are tasked by Buddy, a friendly bear, to stop him using a pair of toy guns.  It’s a straightforward enough plot but Frank elevates it thanks to some fun dialogue and a characterisation that is somewhere between Stewie Griffin and Skeletor.

This a static shooter in that you stand in a fixed point and have to shoot enemies as they approach.  You can’t move or dodge so you’ll need to be fast and accurate when pointing your virtual guns at the swarm of bears that approach you.  Your only means of defence, and indeed attack, are your two guns.  Move controllers are mandatory for this game as they represent the guns.

Holding down the big Move button on each controller grabs your guns (which are located on a virtual belt).  You fire with the triggers, as expected, and when it is time to reload you release the Move button to drop the gun that requires reloading and then reach down to grab a fresh one.  It’s simple enough, although we’d have preferred to see a toggle option as holding down the Move button all the time is a little bit uncomfortable. 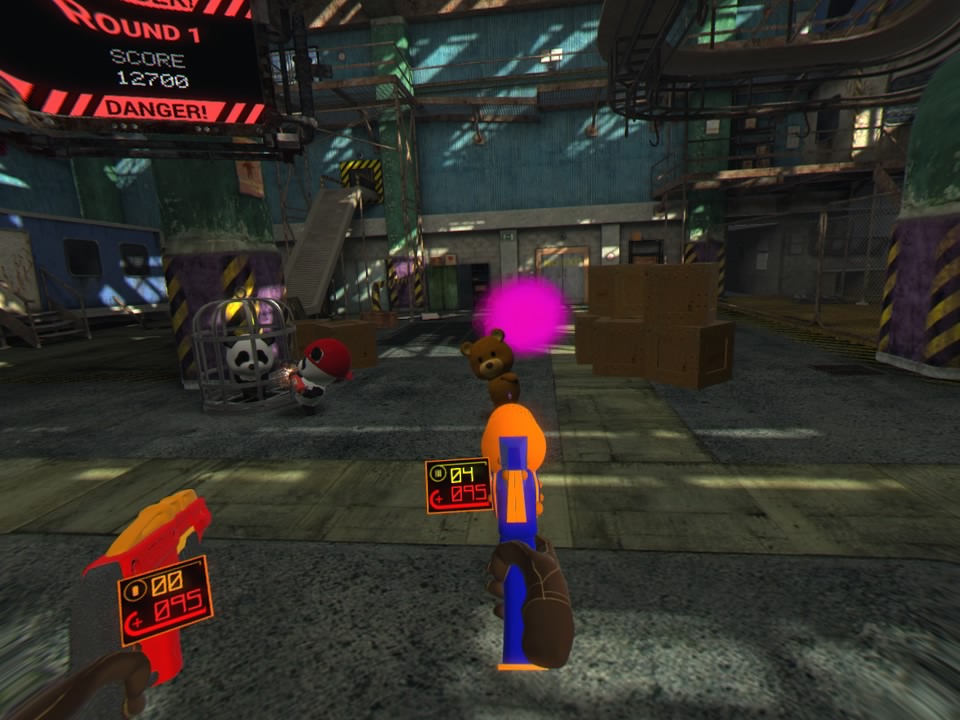 The game just has the single campaign mode and this is broken into three distinct modes.  Survival is the most basic of them.  Here you are given a pistol type weapon which is your main weapon in all three modes and a shotgun which is handy for close encounters and for taking out shielded enemies.  The pistol holds ten bullets while the shotgun is only good for two shots so you’ll need to be aware of when to reload and as enemies can appear from a full 180 degrees ahead of you, you’ll need to keep looking around.

Fire mode switches out your shotgun for a water pistol.  The water pistol has no offensive capability and is there to allow you to put out fires.  Leave a fire too long and you choke to death so this mode really is about multitasking as you’ll only have one offensive weapon.  This means you’ll be crossing your hands over a fair bit and looking away from a fire as soon as you start to extinguish it because there are always other threats to deal with.

Bomb mode works in a similar way except that these levels have a group of friendly bears in the middle and conveyor belts leading towards them.  Bombs travel down the belts and these have to be disarmed with an ice gun before they kill the bears.  Unlike the water pistol, the ice gun does stop enemies though and it can be charged for extra damage.  That said, I couldn’t really see a reason for doing that but even so, the mode works well. 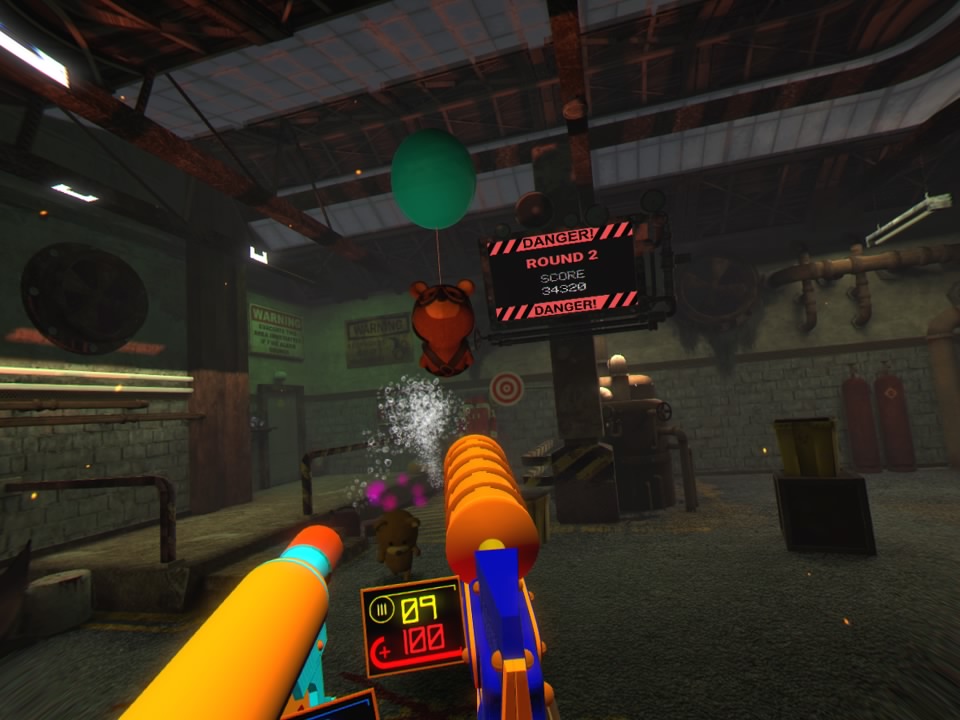 At its best, the gameplay feels exciting and does make you feel like a badass.  Taking out a screen full of enemies while multitasking various threats leads to some moments where you feel like Hudson just before he dies in Aliens.  Oh you want some of that?  It’s all very satisfying and while your guns are very much Nerf type affairs, having to account for gravity does make it a little bit more than a standard point and shoot type of game.

Where Sneaky Bears runs into trouble is its depth.  Each mode has just five levels and the first three of each are very easy.  Once you’ve beaten all fifteen levels, you’ll face the final boss but again this is over pretty quickly.  After that you’re pretty much done with the game as it has no multiplayer options, no online leaderboards and trophies that are earned just for getting through the game and do not encourage any sort of replayability.  You’ll have the whole set of trophies somewhere between one and two hours in and for £15.99 that’s a little bit ridiculous especially as the game has a combo multiplier score system that could have encouraged some high score chasing trophies. 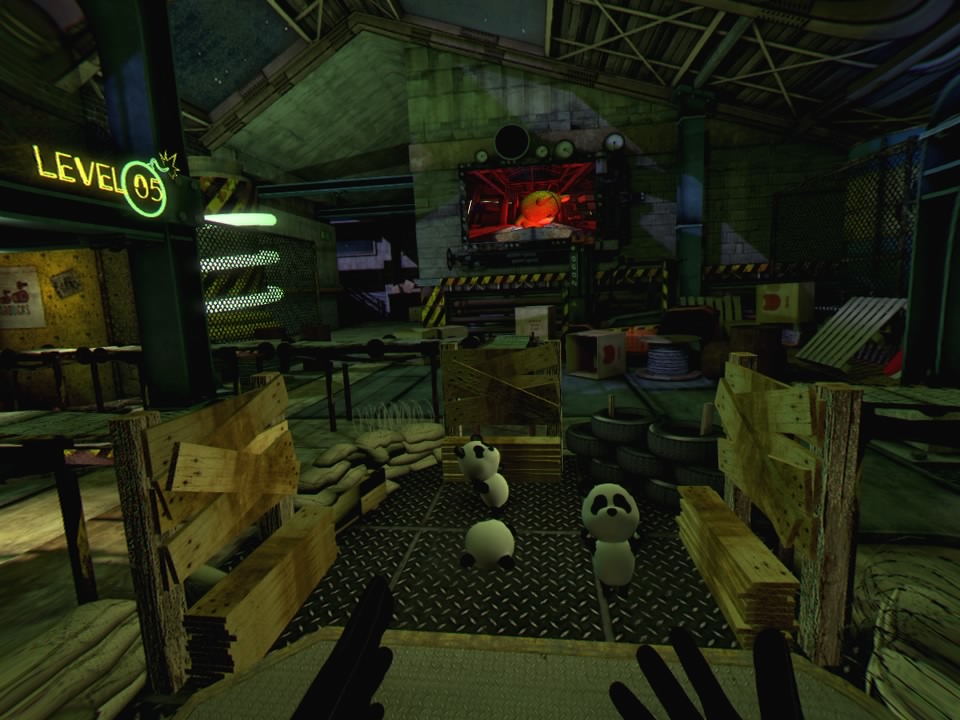 Visually the game is okay.  The factory doesn’t make for the most enthralling backdrop but the action is clear at all times.  The VR gives you a sense of being in a medium sized room but enemies stop a little bit short of your position where as I’d have liked to see them get right in your face and use the PSVR to its fullest.  Sound is also fairly ordinary when it comes to music and effects but the voice acting from Frank and Buddy does elevate it.

Overall, Sneaky Bears is a fun little shooting gallery game.  It’s not the best example of it on PSVR – The London Heist offers better scoring mechanics, Until Dawn: Rush of Blood gives you much more in the way of excitement and Carnival Games has a lot more variation and value for money – but it is a solid effort that is just a few obvious and sensible design choices away from being something special.  For the ninety or so minutes it took me to finish it, I enjoyed the game.  I just wish there was more to it.