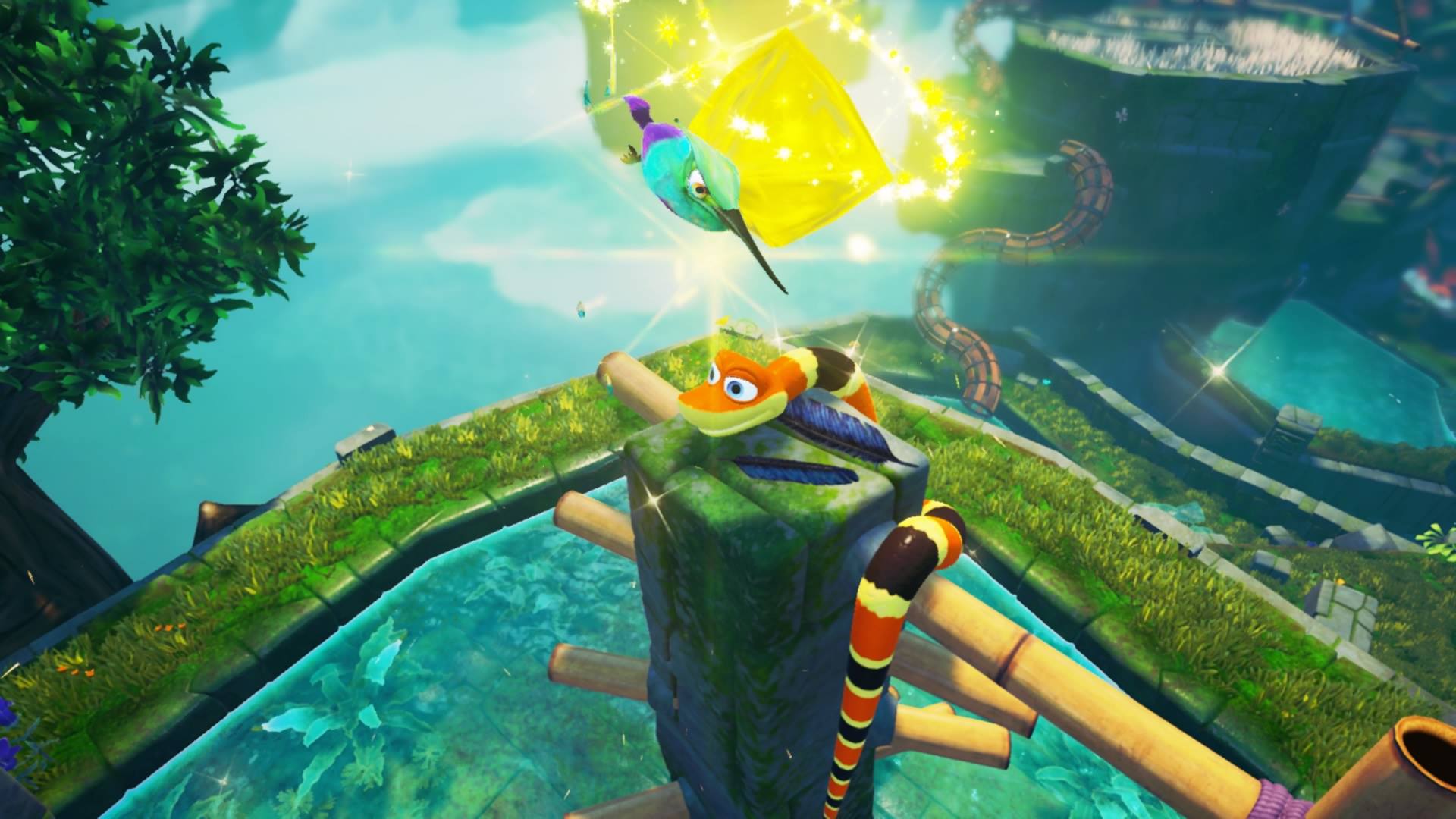 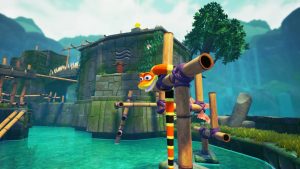 If blue skies were prohibited in gaming, then Sumo Digital would be the revolutionary upstarts who were spraying walls with rainbows and murals of sun soaked beaches. Since Outrun 2, Sumo have made a habit of making sure the day remains pleasant within a virtual world. Daring to tread in the footsteps of Nintendo as they dealt with project after project. Even going as far to challenge Mario Kart outright with the sublime Sonic and Sega All-Stars Racing Transformed on the previous generation.

Until now, the Sheffield based studio has mostly been working on titles based in existing licenses like Forza Horizon and LittleBigPlanet but it is now time that to test the waters with an IP of their own. A game they like to call Snake Pass.

Snake Pass dares you think differently. Eschewing the bipedal, anthropomorphised critters that make up the genre staple, you are almost completely tethered to the ground with no jump button to reach for. As a snake named Noodle you must meticulously wrap yourself around the environment and climb through worlds which are filled to the brim with bamboo poles and colourfully floating hazards. You do this in the aid of assisting your hummingbird friend ‘Doodle’ with finding fragments of ancient gates that warp you to more areas and more traversal lead puzzling. Along the way are blue bubbles to collect that add to your completion score and five gold coins per level that are placed in more challenging locations such as over sheer drops and well-hidden caverns. 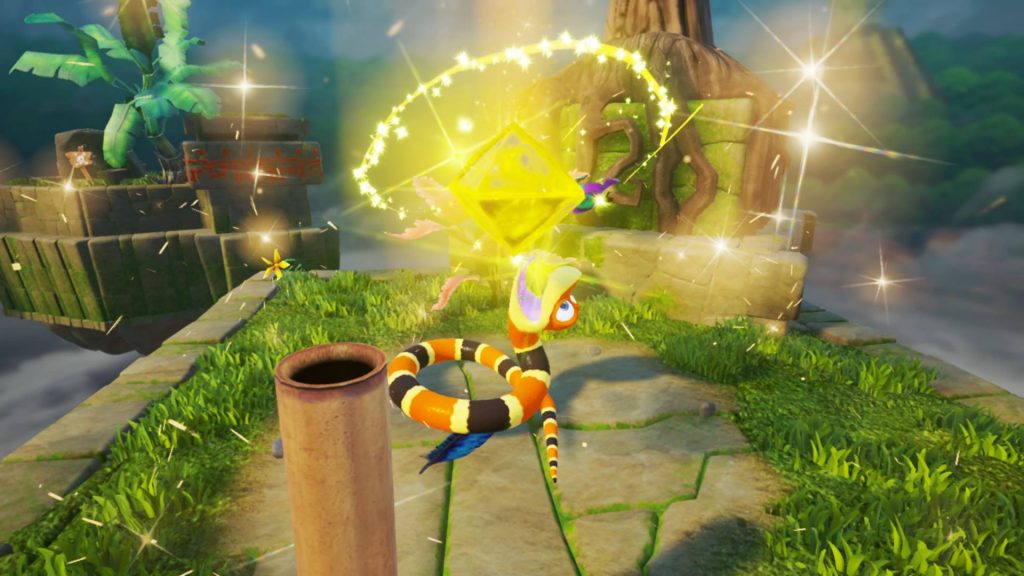 With these in mind, Snake Pass fits in with the adage of a typical collectathon within a 3D platformer mould that rewards exploration. The difference of course is that the controls aren’t as immediately simple. You must learn to think like a snake, with subtleties coming down slithering movement patterns for added speed and how you utilise the environment to get from A to B. The default control setting can be jarring at first with the necessity to hold R2 down to drive Noodle forwards as you weave ahead to pick up momentum. As you approach obstacles you hold X to lift Noodle’s head so that he can climb objects and hold L2 to get extra grip on outcroppings. Doodle can also lend a hand should you find yourself trailing off the side of an obstacle by lifting Noodle’s tail with the tap of the triangle button.

I was unsure about the control scheme at first, particularly with climbing as Noodle tends to be a bit on the slippery side. But after a short while with the game I found myself slowing down and taking a more considered approach to traversal, which turned what could have been a somewhat frustrating experience into a fun and more puzzle like affair. A major portion of the game is designed to be played at any pace you want, with little to no special reward for speeding through, barring of course the unlockable time attack mode.

This also gives the beneficial side effect of giving time to appreciate the extra care and attention that has gone into the visual and sound design. The colourful nature of Snake Pass oozes charm thanks to the Unreal 4 engine and makes the various stages come to life in an organic way. The levels range from grassy plateaus to fiery volcanic regions that each have their own personality and environmental hazards. Coupled with the visuals is an appropriate and thematic soundtrack that stands the test of time as you slither through each world’s four acts.

This design lends itself well to Noodle and Doodle themselves. Noodle being almost completely mute but packing heaps of charm as his expressions give you a clear indication as to whether you are dangling precariously or hitting your stride. Doodle is more of an expository character, who basically just tells you what is happening story wise in a loose manner. Whereas this would be a bit annoying in similar titles, Doodle also serves a purpose by flying near points of interest to help you along the way. I was particularly thankful for this in the larger levels which have multiple ways through and he certainly doesn’t get in the way enough to cause a nuisance. 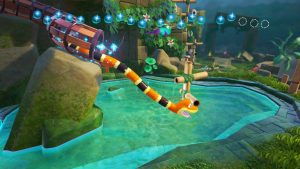 Overall, Snake Pass is a remarkable title that turns what would be a relatively simply run and jumping platformer into a well crafted and challenging game of traversal, with plenty of colour and charisma to boot. If that is something you have been missing since the N64 or PSone days then this will tide you over nicely until Yooka-Laylee hits the scene.

Snake Pass
8 Overall
Pros
+ Beautiful visuals with plenty of cartoon charm + After the brief wrestling with controls, traversal becomes a lot of fun + Packed with charm, especially In Noodle’s case
Cons
- The default control system feels unnecessary when the ‘Easy’ setting is there - The camera can be an issue in tighter spaces - Could have done with a couple more levels or challenges
Summary
Snake Pass is a fascinating take on the 3D platforming genre. It features conventional progression and collectables with a non-conventional control scheme that seeks to test your mettle and dexterity. The game takes a step away from Indie-brand self-reference and expositional stories to present a unique gaming experience that feels incredibly rewarding to master.  We can only hope for more, as this tale of Noodle and Doodle is heaped with oodles of charm.