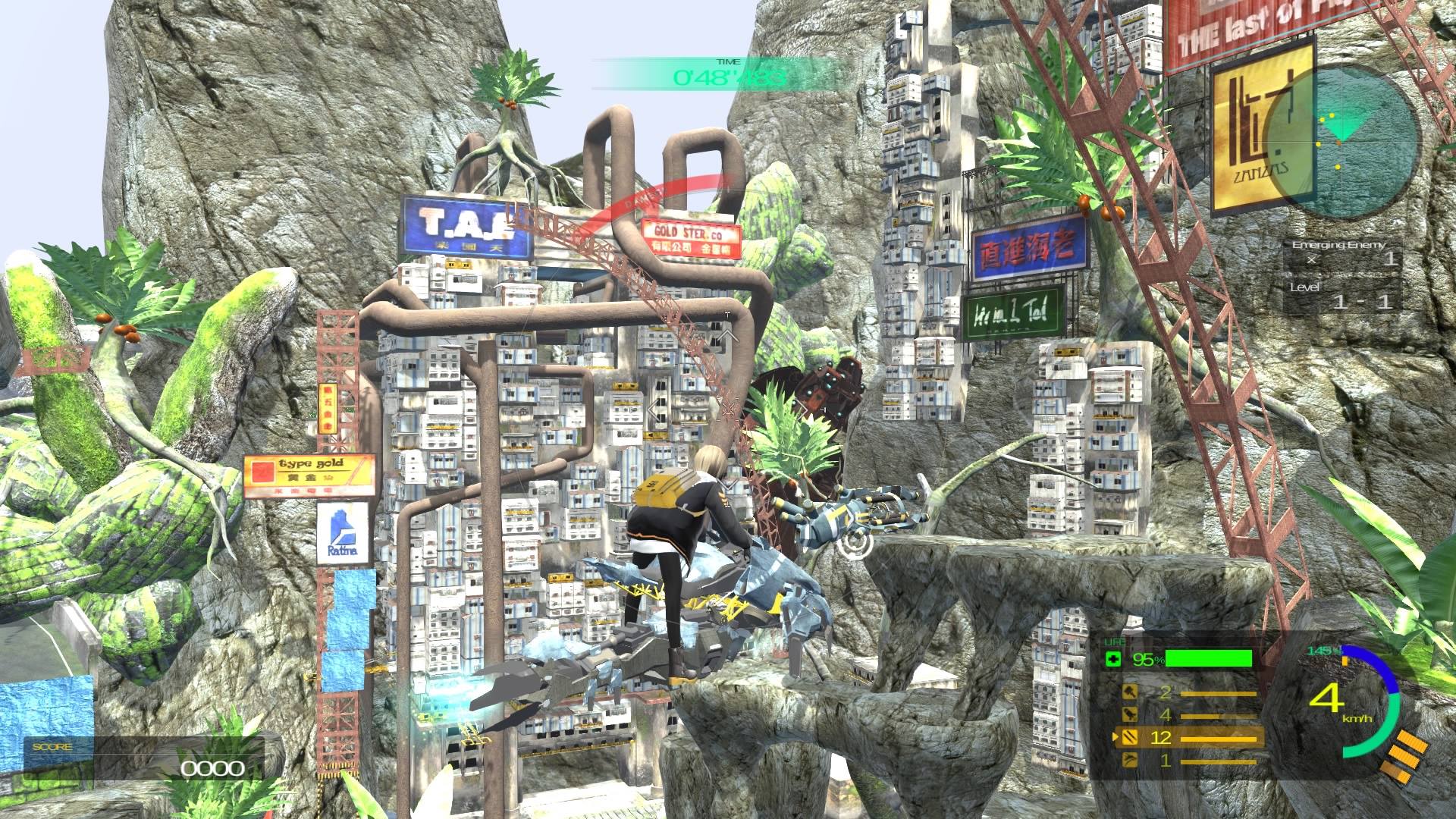 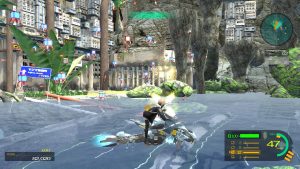 The PlayStation Network Store has been an interesting place to be recently. There has been an influx of somewhat shady releases that show clearly that the floodgates are now open, similar to that of the Steam greenlight system where just about any crap would do. Titles such as Life of Black Tiger come to mind as a high profile example that get a lot of attention, however more are slipping through the cracks daily. Here’s another.

Sky Ride is a third person action game that apes arcade style gameplay. You play as a non-descript, not quite anime person as they ride on a hover bike shooting things out of the sky. The action takes place in a giant bowl made out of broken street signs, construction girders and impossibly placed broken bits of road. The controls are somewhat interesting, as opposed to being a fly towards the screen kind of deal you have full control over your bike at any given time with both of the sticks, left providing your basic movement while right controls your up and down movements. Your mission is to blow up everything that moves, with enemies ranging from non-threatening blue boxes with prongs, up to large scarab like machines with powerful laser armaments.

Now where that may sound interesting and somewhat fun, this will likely be the part that drags it all down and it did for me. There is nothing more than this. Sky Ride is guilty of having only one play area, no varying difficulty settings, extra modes or even menus. When you start the game you are greeted with a slightly greyed out window of the game, you press start and then you are in the game straight away. Now some may see this as a plus, however please remember that this is currently being sold for £18.99, It definitely gives off the feeling that this game is either unfinished or being left intentionally sparce to fulfil the basic minimum to get on the PSN store and everything above shows that capably. 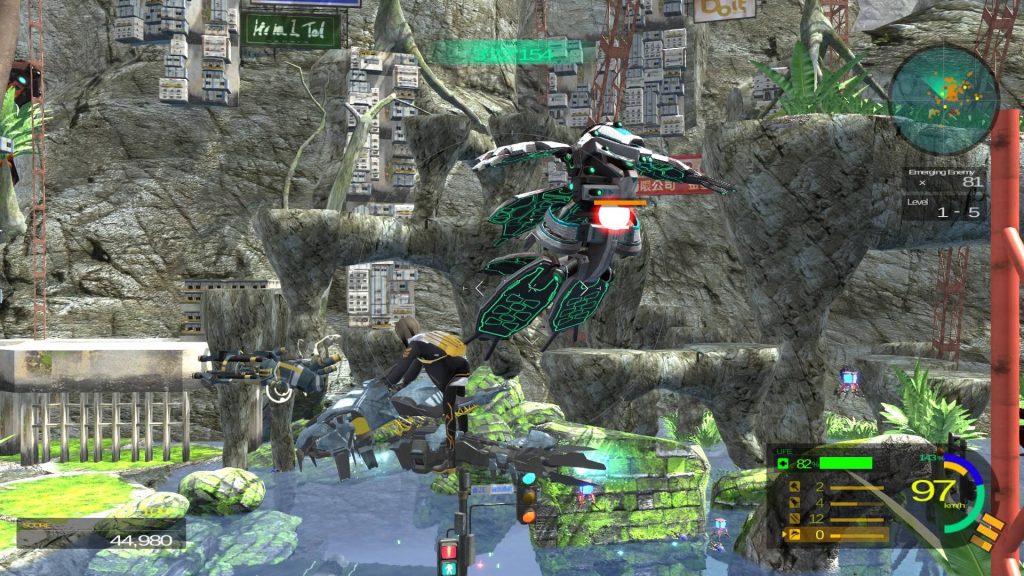 In regards to gameplay, Sky Ride actually does okay. After a brief amount of time wrestling with the controls you can generally get a good feel for how the hover bike handles. The real highlight comes when you are able to weave through the onslaught of enemies and the scenery around you. However, there is a major caveat with this, your viewpoint is always fixed to the level that you are on, so the sense of verticality is somewhat wasted. It also makes things a lot harder to work with when you are trying to dive down for health pickups and enemies at sea level, causing a lot of frustrating deaths in the process. Another caveat is the framerate which seems to be sub 30FPS as a rule when there is nothing on screen, but considering that it does at least keep consistent when your view is filled to the brim with enemies.

Rather than just the basic machine gun cannon fixed onto your bike you also have the use of four weapons that add extra punch and spread to your attacks during each gameplay loop. These boil down to your usual lazer and homing missiles so aren’t particularly exciting but they get the job done. As ever with this game there is a problem however. It is often quite hard to actually work out how you replenish the special weapons. I assume the weapons regenerate on their own and that the pickups you find are for points and health only, but when you are in the thick of a battle it becomes a pain to keep track of.  Likewise, with health the gauge is pretty hard to work out. You can take a couple of hits in the game but it always seems inconsistent at just how much you can actually take before death. 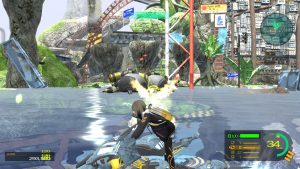 During one of my sessions I watched as my health bar flipped between zero and a hundred percent within seconds, it even earned me a trophy. There just seems to be no rhyme or reason to it and it makes it very hard to apply strategy to the game, which otherwise is seemingly possible as the enemies have predictable behaviours and they always spawn in the same place. The gameplay loop seems best approached through a chaotic strategy, just go in and shoot what you see with no thought and you will do enough to get on the leaderboards. For those interested I am currently 15th in the world, which says less about my skill, but just how thoughtless this game seems.

Sky Ride
2 Overall
Pros
+ The hoverbike handles fine when you get used to it + The manual makes for some hilarious reading
Cons
- Once you have played two waves of the game, you have seen all it has to offer - No reward for careful consideration, strategy or skill - Lacks basic features. menus are missing as are varying game styles - This currently costs £18.99. There is no justification for that price.
Summary
Sky Ride is an incredibly vacant experience. It lacks the basic features that you would expect a game in 2017 to have and does nothing to make up for it. You only get one game mode, one map, no menus and a predictable loop that repeats with no variety. It is incredibly shallow for the price and certainly not as exciting as it may seem on paper. Best to avoid this one.