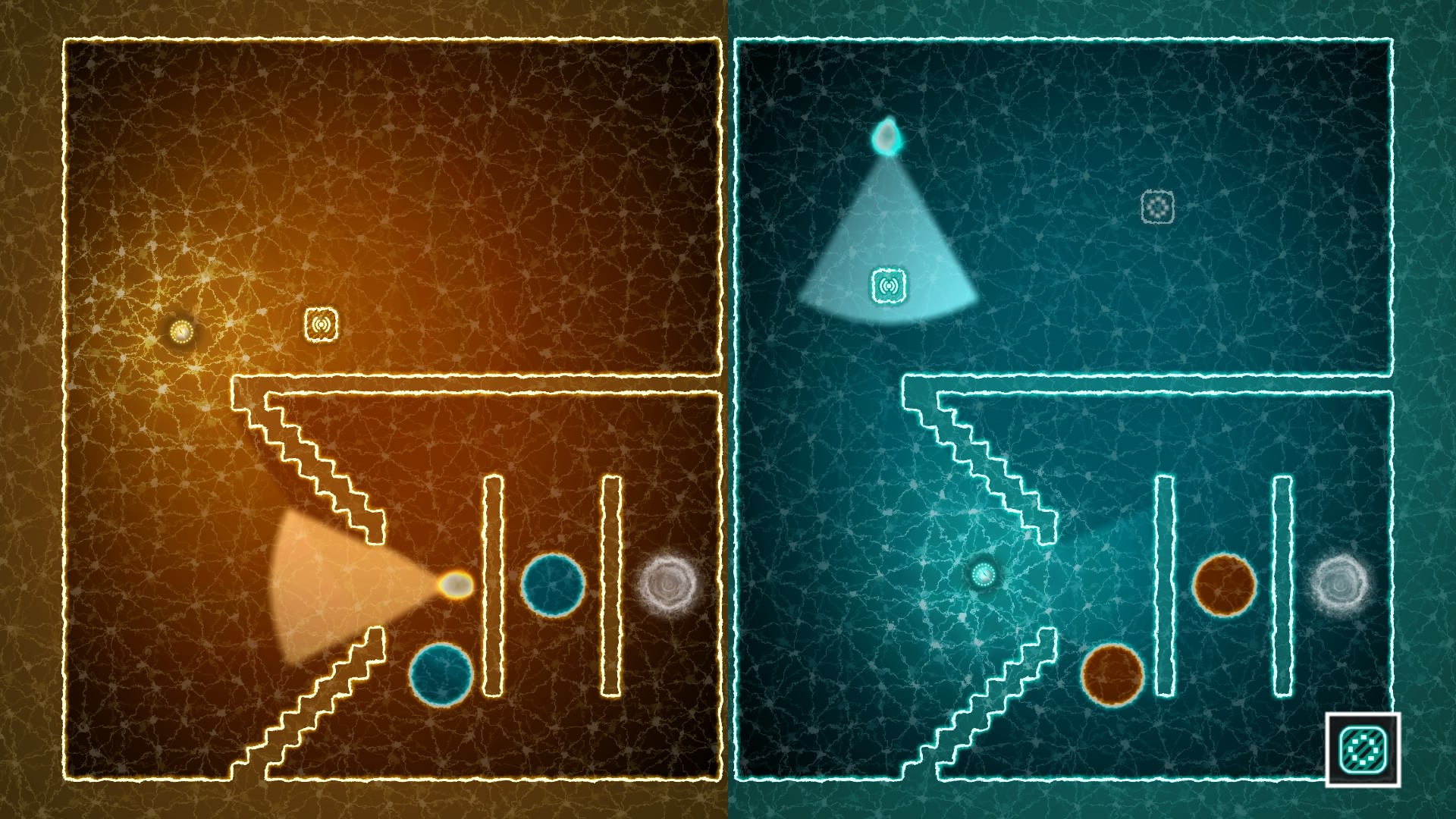 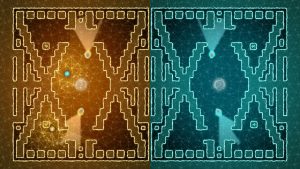 I’ve never been a huge fan of dual controls in games but some games are able to overcome the control method to produce good gameplay. Brothers in particular was great, even if trying to control the two brothers at the same time with different analog sticks was something of a chore.

Well, Semispheres also uses this control scheme but, as with Brothers, gets away with it thanks to good puzzles and a reduced requirement for too much actual dexterity and skill.

It’s a puzzle game where you have to get two blobs from one part of a one-screen level to another. In your way are guards that you have to avoid. They have a Metal Gear Solid style cone of vision which is usually covering the only way through and getting past them is usually going to take a series of actions across both halves of the screen (and controller). 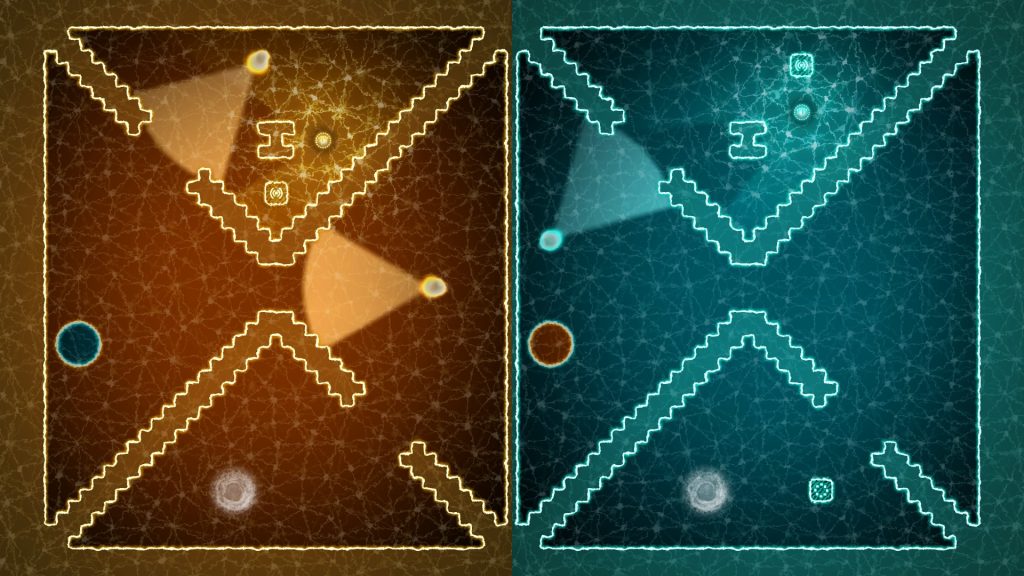 Each level is split screen. On one side everything is orange, the other side is blue. And the layout of enemies and walls can be the same or different on each side. You control the left blob with the left analog stick and the right with the right stick. Your blobs, I need a better word but that’s what they are, are capable of minimal interactions and these are granted by stepping on an icon on the floor. These icons give you actions such as making a distracting noise, opening a portal (which lets you use the noise action to distract an enemy on the other side of the screen) or transporting a blob to the other side. You get one use when you step on an icon but these do not disappear so you can keep going back.

I could go deeper into the game mechanics but there isn’t that much to it. New icons are introduced as you progress, adding new actions but it is still mostly just a game about distracting enemies and running past them. It is quite rare that you’ll have to run both blobs at the exact same time which is good because once the side switching icons come in, I’m never quite sure which one I’m controlling. 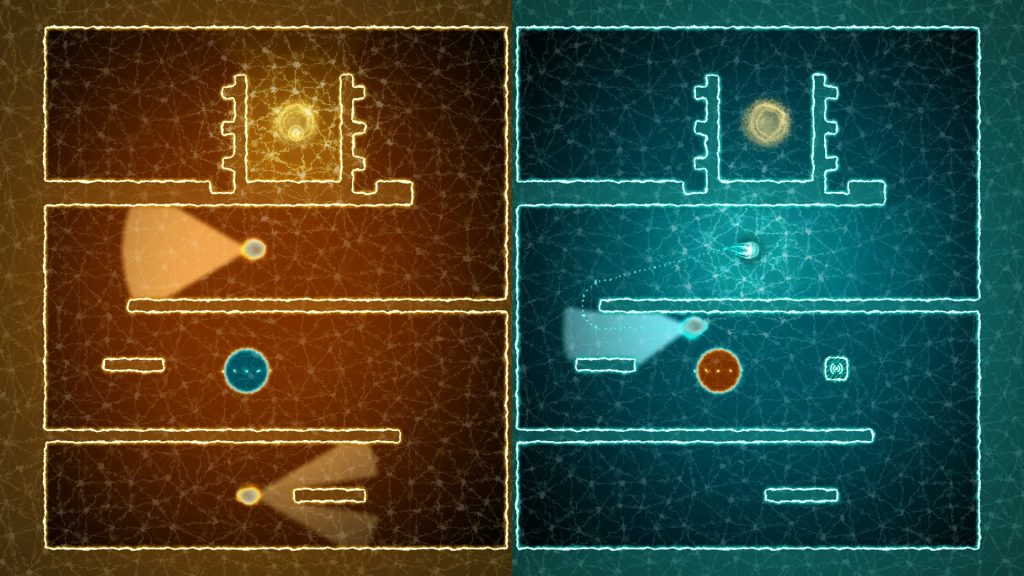 The levels are short but cleverly designed. There aren’t a ton of them either (up to five levels per chapter and just eight chapters) but I quite like that. There’s nothing less appealing to me than massive puzzle levels. I detested Hitman Go because of it. It looks like one hidden trophy might be for beating the whole game in 35 minutes. I’m not sure if that’s a speed run or just totalling up each chapter but it gives you an idea of the game’s shortest possible length. I dare say it’ll take some refining to get down to that sort of time though.

Visually everything is neat and with not too much screen fuss. Enemies and icons are easily identified and the background patterns don’t get in the way. The blue and orange look is nice enough too but, as expected, this won’t be pushing your PS4 to its limits or anything. The quiet ambient music is just there to fill a little space but is reasonably forgetable. Handy though as my new cat slept through it when she was on my lap as I was playing this. 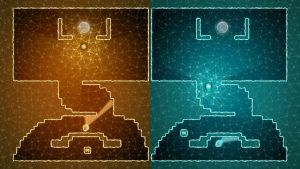 So overall Semispheres is quite a pleasing game. The puzzles require some working out but they aren’t quite as trial and error based as a lot of modern puzzlers and I’m a fan of the game’s short-ish length too. Make me play through 500 levels of this and I’ll straight up kill myself but a forty or so? We’re good.

The controls work well enough and the game is presented cleanly. It’s not going to change the world but Semispheres is a title that puzzle fans should definitely take a look at.

Semispheres
7 Overall
Pros
+ well designed puzzles + less reliance on sheer trial and error + short levels and not too many of them + dual controls aren't too obnoxious + good mix of puzzling and stealth
Cons
- not much variation - might be too short for some
Summary
Semispheres is an elegant mix of stealth and puzzle solving that doesn't overstay its welcome. The levels are short and well-designed and will give your brain a decent workout without dragging out the experience. You might ultimately want more variation and length from the game but for us the game's bite-sized levels work great.