Pretty Girls Breakers! is a bat and ball Arkanoid style game that comes to us by way of Zoo Corporation as part of their on-going Pretty Girls series.  It’s published by Eastasiasoft who are known for their cheap and cheerful, easy to Platinum ports.

While we’ve seen this style of game a lot over the years (and as recently as last month with Breakout: Recharged), this game does things a little differently.  Although you do get the usual wall of bricks, a ball that destroys them and needs to be kept in play and the standard sideways-only motion, Pretty Girls Breakers!  adds an extra element to the gameplay. 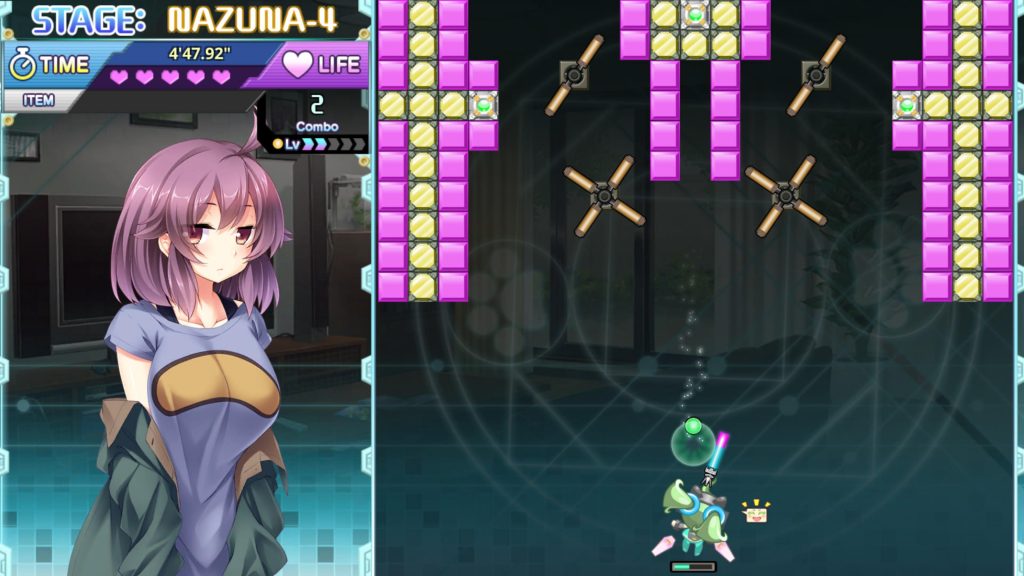 The game features seven girls and each one has three to four stages to get through, and by that we mean you just have to clear out all of the bricks.  Regardless of which girl you play as, they all carry a bat that they swing at the incoming ball.  You can swing the bat from the left (using

) and you have to do this if you want to return the ball.  Simply getting in the way isn’t enough.

Given the fact that you can swing the bat from either side, instinctively you expect that how you hit the ball will have some bearing on the direction it then goes.  However, this isn’t the case at all.  The direction the ball travels at is completely dependent on your overall positioning, just like any Arkanoid clone.

That’s really odd and was the source of some annoyance for us.  Why make us hit a button to return the ball when no other game of this type does that?  However, there’s a bit more to the game than that.  Timing your button press perfectly will add to a combo meter and if you get that high enough, the ball will temporarily turn into one of those balls that can go through bricks.  It also adds a scoring element for those of you who want to compete for leaderboard glory.  It’s a little clumsy but this genre needs a few innovations and so we’re not going to complain about this one. 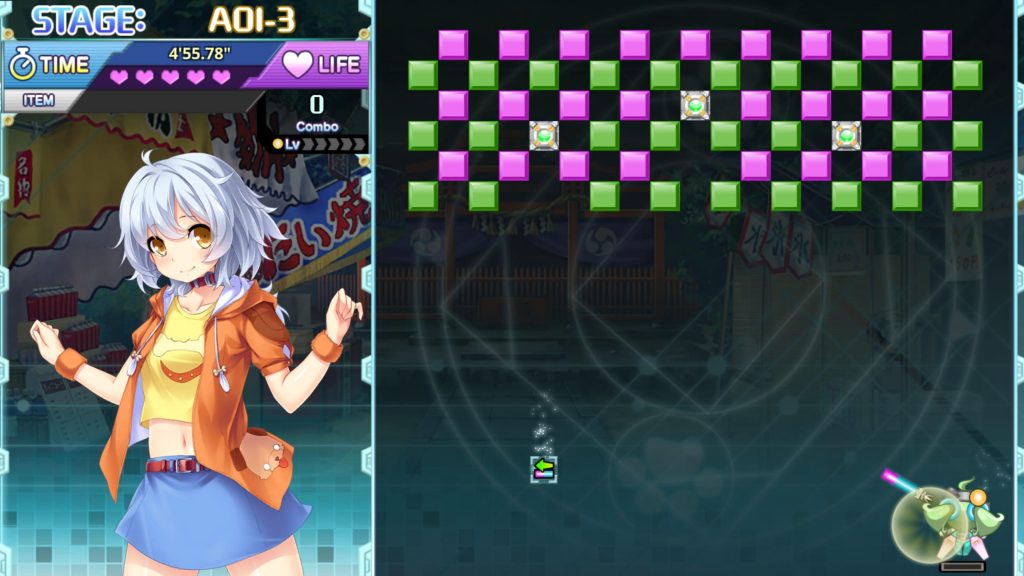 Another reason for the girls to carry bats is that later on the game throws in turrets and enemies that shoot at you.  The bullets can hurt you, taking away one of your five lives, but your bat can be used to return them.  You can’t destroy turrets with them but you can defeat enemies and break bricks, so it’s worth taking the risk to do this wherever possible.

Aside from that, you get a few power ups including bullets of your own and a useful barrier to block the bottom of the screen (although this is next to useless on later levels where the incoming bullets are like rain).  And then it’s just about what the levels add.

You’ll soon get the bricks that take multiple hits and ones that can’t be destroyed.  Those turrets and enemies show up, as do spinning bats that send the ball off at unpredictable angles.  The levels continue to get more and more tricky with at least a couple of them giving us a bit of trouble on the way to completing the game. 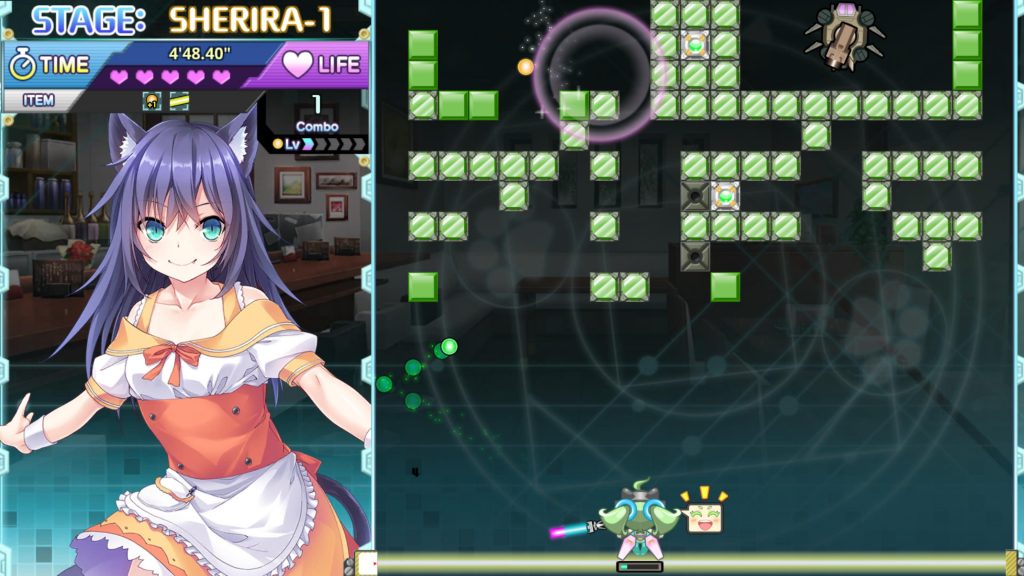 As ever, the trickiest thing is often getting the ball to hit that one last awkward brick.  This is even more frustrating (and not in a bad way) when you realise you’re up against the clock but, for the most part, the time limits weren’t really much of a problem.  Most of our latter failures came from just being lit up by bullets but this isn’t a tricky game.

Trophy fans will gladly accept their Platinum after beating the fifth girl’s levels.  The other two girls aren’t necessary for the trophy but these levels are the trickiest and worth playing through.  Being an Eastasiasoft joint, you’ll get identical PS4 and PS5 versions of the game with a trophy stack for each one.

Of course, part of this game is this nonsense about those titular ‘Pretty Girls.’  What this equates to is that each girl gets a costume change after each of their levels.  The main menu also has a ‘Dressing Room’ option where you can look at these costumes.  To be honest, this stuff irritates us because the girls all look really young from the neck up.  Standard Anime weirdness.  But none of it affects the gameplay. 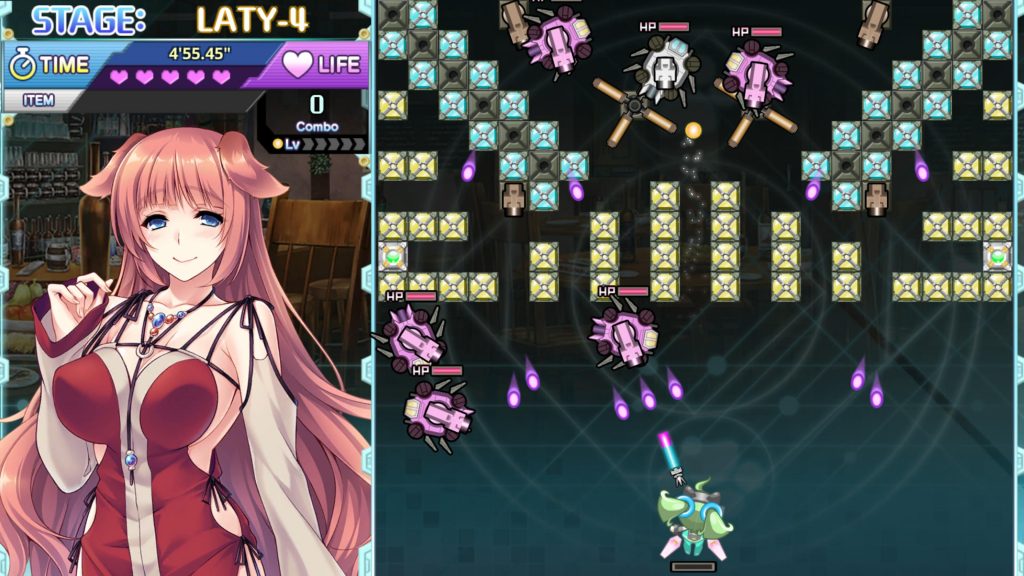 After some initial misgivings about how the bat mechanics are implemented, we quite enjoyed this game.  You don’t want hundreds of levels in this type of game so the 20+ that you get here are more than enough.  The difficulty curve is pretty steady too (apart from one or two aberrations) and it all builds up to those tricky final levels in quite a nice way.

So, yeah, an Arkanoid clone that adds a few extra mechanics and doesn’t overstay its welcome is probably what we want from this genre.  We can take or leave (well, entirely leave) some of the anime stylings but the visuals are otherwise clean,  clear and bright (and each set of levels has its own cheerful music) and the game is engaging enough during its reasonably short life.  And at this price, you can’t really argue with that.

Pretty Girls Breakers!
6 Overall
Pros
+ Decent level layouts
+ Mixes up the genre a little
+ Just about the right level of challenge
Cons
- It feels like the new bat mechanic could have been more precise
- The game's visual stylings won't be for everyone
Summary
Pretty Girls Breakers! is an Arkanoid clone that tries a couple of new things and while it may not improve on the original recipe, it's nice to play a game of this style that has its own ideas.