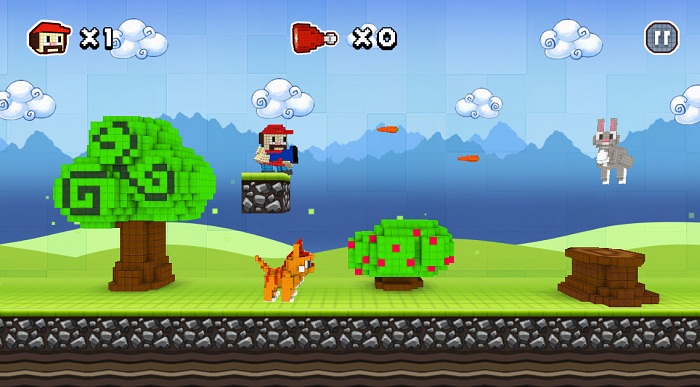 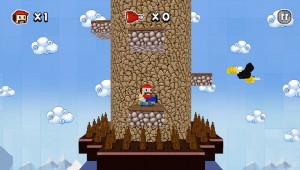 You can’t really call this onslaught of 8-bit looking, neo-retro titles a phase or a fad.  Ever since Geometry Wars and Pac-man: Championship Edition blew up on the Xbox 360, we’ve had a steady stream of these games.  Usually they pick on a direct inspiration and Pixel Hunter, from Georgian dev crew Lemondo, is a run and gunner, most directly inspired by Contra and Metal Slug.

You play as the titular hunter and it is your job to travel from left to right across a voxel environment (they are essentially 3D pixels), gunning down small animals before eventually facing off against a bigger boss creature.

The gameplay is focused on two elements: platforming and shooting.  Neither element is particularly fleshed out though.  Shooting is usually a case of being at the right height to hit your target and platforming is rudimentary until the occasional difficulty spike.

Occasionally the platforming will add a new wrinkle.  Such a vertically scrolling sections or a crazy rotating section a’la the old Speccy classic Nebulous.  Likewise, the enemies do get tougher and more mobile on later levels. 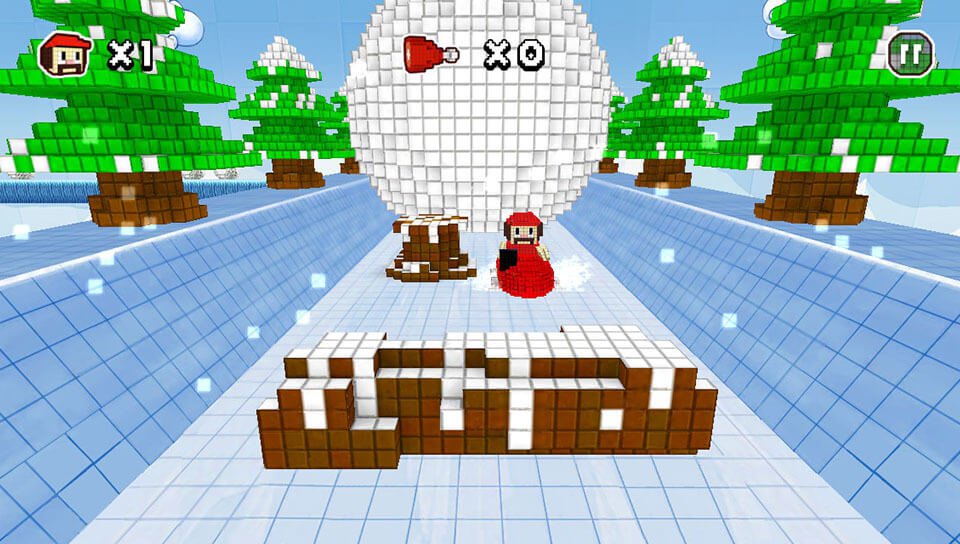 Each level is split into sub-levels and once you reach the end of the level you’ll have a boss battle.  As ever these are just a case of learning the patterns and how to exploit them.  If you beat the boss, you unlock a new weapon that can then be used on any unlocked levels, including those you’ve already beaten.

Why would you play earlier levels again?  Well, the aforementioned difficulty spikes and boss battles can provide a quick and easy way to lose lots of lives.  When you kill enemies, they drop meat.  100 meat er… bits will allow you to continue and you’ll probably need to use that a few times.  Especially when you are learning boss patterns.

Unfortunately, the rate that you pick meat up will mean you’ll be grinding a fair bit when the going gets tough.  Of course, this game was originally out on iOS and Google Play where IAPs allowed you to buy your way out of this situation (if you’re an idiot who hates money) but on the Vita there are no such options.  So get ready to grind or just suck ass on the later levels. 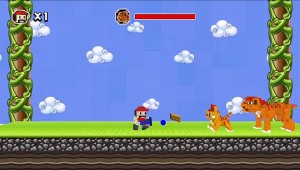 To be honest, I’m not sure what Pixel Hunter thinks it is offering.  It lacks the artistry of Metal Slug, the well-considered gameplay of Contra and it even stacks up badly compared to Gunslugs (another 8-bit looking Vita run and gunner).  There’s nothing interesting going on and certainly no reason to put yourself through the more challenging aspects of the gameplay.

Visually the game is very plain (with a similarly forgettable soundtrack to back it up) and the game never feels particularly solid or fun.  It just exists.  It is playable and, to be fair, the Vita isn’t exactly loaded up with run and gun games but Pixel Hunter needs to try a lot harder if it wants to reignite the genre.

Pixel Hunter
4 Overall
Pros
+ Easy to get into. + Playable enough. + After a while, it does start to provide a challenge.
Cons
- Game balance appears to be affected by IAP relics from its mobile days. - Very average presentation. - Some of the platforming sections are a little mean spirited.
Summary
Pixel Hunter is about as average as it gets. A platformer that started on mobile phones and should have stayed there.