THQ Nordic do love their dirty driving games and their latest effort, Monster Jam: Steel Titans, reunites them with Rainbow Studios, the longstanding custodians of the MX vs ATV series.  Much like that series, this one has been around for a while but has bounced around between publishers, with different dev teams having a go at bringing this distinctly American motorsport to consoles.  So, what can the veterans at Rainbow Studios do with a series that has arguably said everything you can about trucks with big wheels?  Let’s find out but take this review with a barrel full of salt as I’m English.

The game itself offers, as you’d expect, a career mode and a series quick races/events.  The career is where 99% of the game is and much like the last MX vs ATV game, it adds the now-mandatory open world area full of hard to reach tokens where you can practise making your truck fall on its roof until your heart is content.  A quick tutorial explains how to race and how to do stunts but then you are on your own, thrust into a world of arena, outdoors and stadium races and freestyle events. 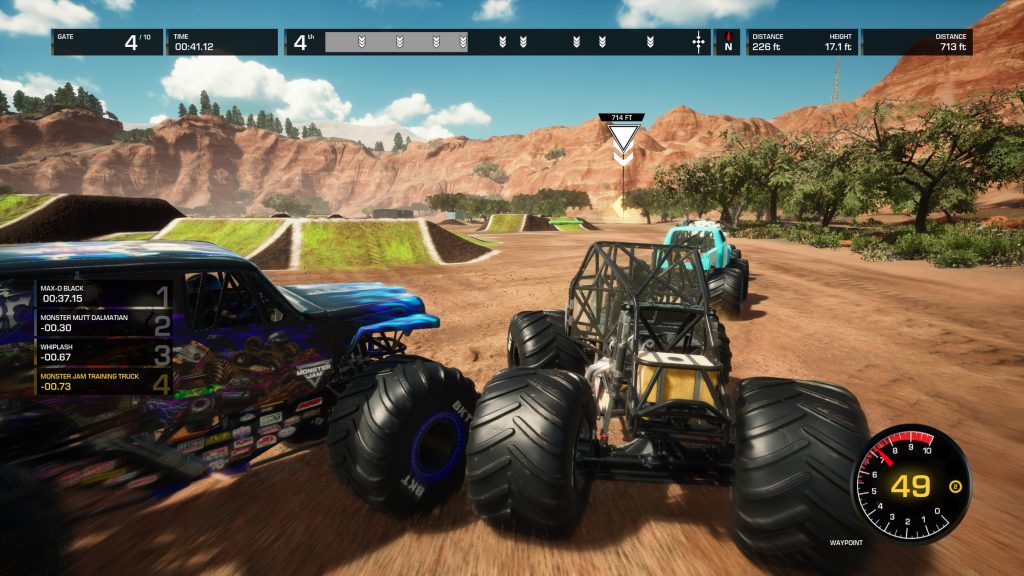 The learning curve is pretty straightforward.  You set off in your truck by holding down

and power off down the track.  The AI initially gives you a bit of resistance but you can spend in-game money on upgrades and as soon as you do the first set of races (which felt like a hundred but was more like a dozen) become a mere formality to win.  They are mainly on ‘rhythm’ tracks where it is implied that you need to adjust your throttle so that you land perfectly on the the right side of any bumps in the undulating track (kind of like Trials HD).  However, doing that will get you beaten.   Push down on the gas and don’t let go if you want to win.

That strategy carried me pretty far.  At least when combined with upgrades to my top speed, acceleration and handling.  I never didn’t have the money for the next upgrade and so it felt like I was always ahead of the curve.  At least until the third set of events where occasionally a race would seem really hard to win (especially as your truck is very fond of flying onto its side like a toddler having a hissy-fit).   I actually failed the third set of events much to my chagrin, finishing fourth and having to do the whole thing again.  I won it the next time but I soon realised I didn’t really want to do it all again because of the series’ structure. 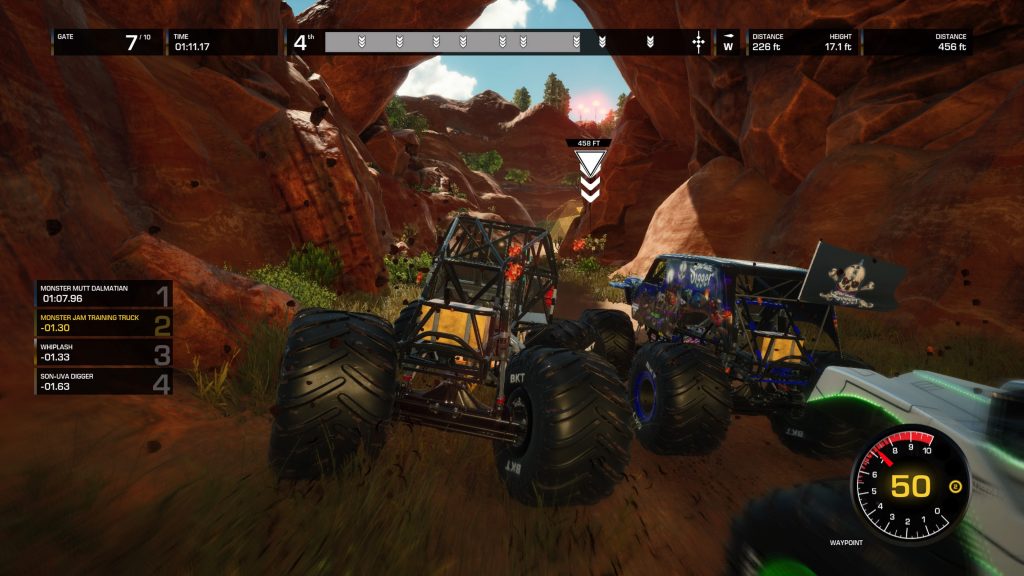 In this set of events you get a head to head race (you and an AI truck battling it out on a track that is two small for that kind of behaviour), a combo stunt event (where you basically defy physics and hope your truck starts breakdancing long enough for you to win) and a timed stunt event that was basically impossible to not finish in the top three if you aim at a ramp and pull hard on the left stick while holding down the accelerator.  That sequence gets repeated five or six times and gets old pretty quick.

Your reward is always another series of events doing either the racing thing or the unconvincing stunt thing.  And that’s the main problem with this game.  The gameplay itself is fine.  The vehicles handle reasonably well, you feel that connection to the tracks and it moves at a decent pace but the structure around that is pretty weak and repetitive.  To make matters worse, this is so similar to MX vs ATV: All Out that it basically feels like it could just be another mode for that game.  At times it just feels like they’ve blown up the tires, shrunk the human and rolled out the same game engine.  If you like that kind of thing then the decent vehicle handling will keep you interested but if you’re not a die-hard fan of this kind of thing, Steel Titans isn’t the game to win you over. 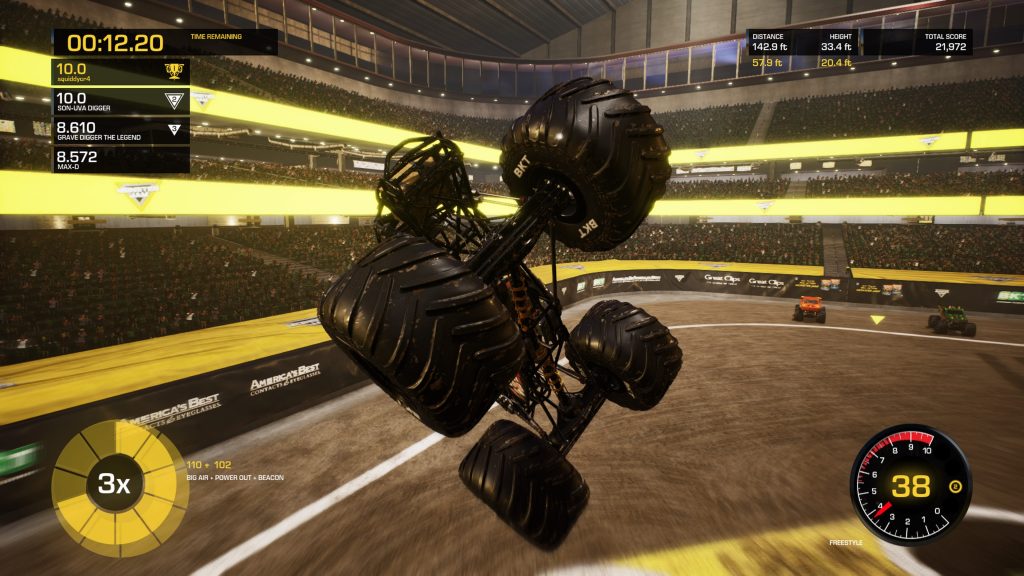 The presentation, much like MX vs ATV: All Out is a little lacking too.  The visuals are prone to some hard pop-in, the direction arrows on the track are often tricky to read and everything feels a little low-res (although the lighting is pretty good).  Sound is the usual throaty roars of engines and generic metalcore music that sounds like an MMA promotion would use it to save money.  The game is also seriously lacking in atmosphere which is super apparent when you win an event and start waving and posing to a non-existent audience.

That’s not to say this is a bad game.  It’s just that Rainbow have given us everything we expected and less here.  Because they are limited to just using monster trucks, there are no opportunities to mess about with other vehicles, the tracks feel samey and are overused and the game just doesn’t have any love in it.  It feels like the driving game a robot might put together.  I know it’s odd to think of driving games having a bit of a soul to them but I remember chasing sunsets in FUEL or just having a blast with Forza Horizon, but this feels kind of empty.

In conclusion, this hasn’t won me over but if you’re already sold on the idea of a monster truck game then this might well do it for you but the super-inconsistent difficulty level, lacklustre presentation and repetitive career mode are definitely issues that most gamers will find hard to overlook.