Milanoir from Italian developer Italo Games based in, yup, Milan is a gritty homage to classic 1970s crime films. The press release namechecks the cult crime films Caliber 9 and Almost Human as references. We guess they were bigger in their homeland than outside Italy though as we hadn’t heard of them before.

You play as the crimson jacketed anti-hero Piero over seven acts. He’s the main enforcer for the Lanzetta mafia family who are trying to stop a rival gang muscling in on their territory. Though it turns out they do have something of a moral code and you’ll find yourself thrown in jail for crossing the line even your bosses wouldn’t breach.

Eventually Boss Lanzetta comes calling though as you’re the only man for the job of ridding Milan of the usurpers, one sub boss at a time. Or in the case of one memorable end of level set piece, two  at the same time.

The pixel art style lends itself well to the grimy criminal underworld you’ll navigate, evoking the likes of Super Time Force amongst others in terms of characters spindly limbs. In addition, the soundtrack  is a cross between  any number of 70s era films and what the Wu-Tang Clan might call porno-flick music. 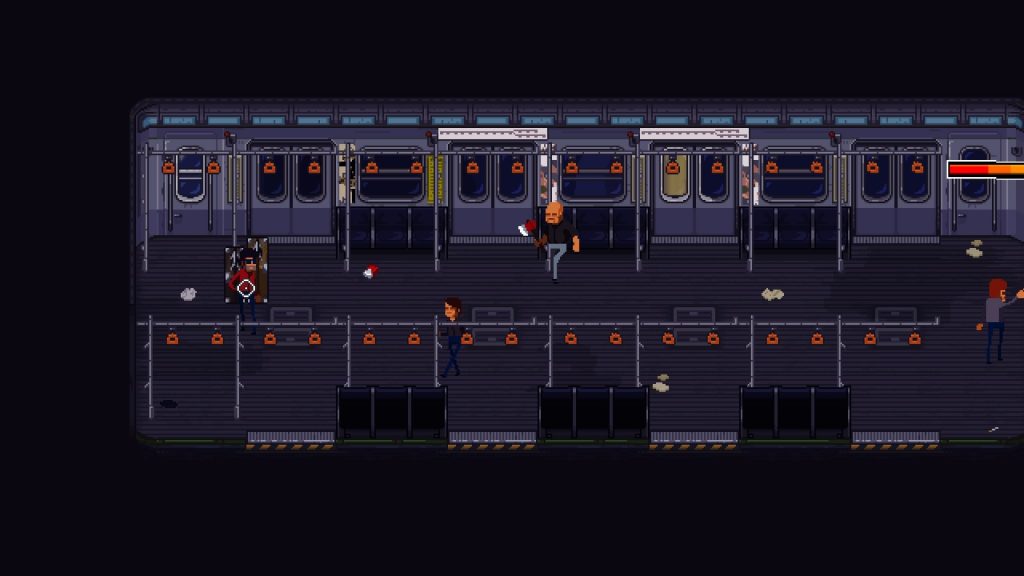 Milanoir  is a tough game. The challenge is such that we’ve not been able to finish the storyline of the game before writing a review as we’d usually prefer to. Every enemy, however innocuous has the potential to end you. Moreso those with shotguns or submachine guns. Sometimes deaths can feel cheap, you’ll survive a lengthy onslaught only to fall to one enemy coming into range as you reload. You generally won’t have an issue with melee enemies as you’ll usually mow them down before they get in range to cause you any problem. Molotov cocktails are another instant death, especially if you take a direct hit.

Combat is generally you with a pistol against multiple enemy types of varying threat, thankfully your crosshairs auto-snap to nearby enemies by default. Switching off that to make the game harder is only really one for the hardcore masochist. 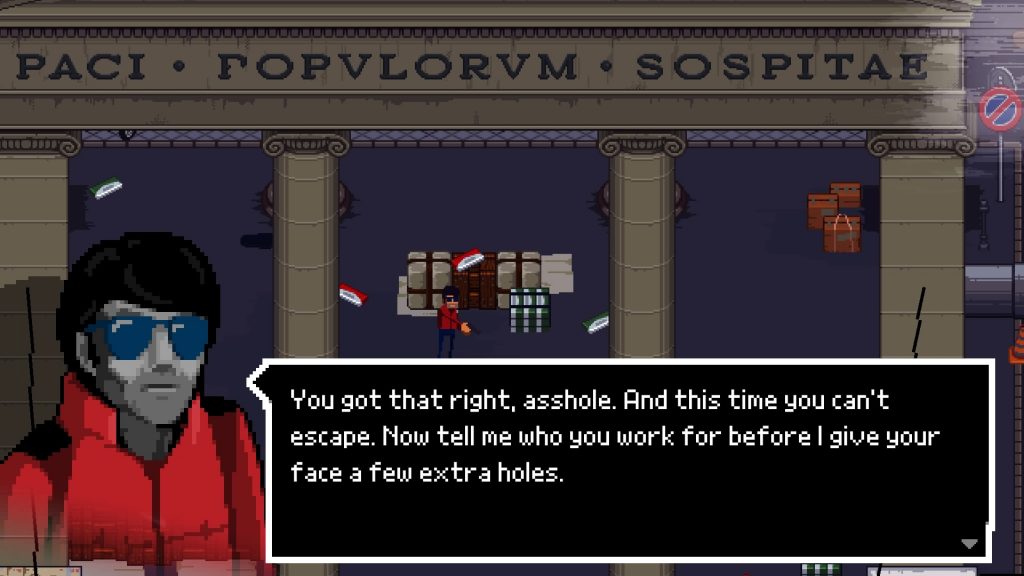 There’s trophies for finishing each level without dying. All we have to say is good luck with those as we died countless times in the four out of seven levels we got through. That said, you’ll feel a genuine sense of achievement when you finish a level, regardless of how many times you’ve had to retry. It would be interesting to get a breakdown of exactly how many times we have died in fact, perhaps something for a future patch? Either way, we don’t expect we’ll be getting the no death trophies anytime soon, at least not without invincibility!

Milanoir generally does set pieces very well, you’re likely to remember them long after having finished playing. Although they can also be roadblocks you’ll really struggle to get past, the opening section of Chapter 5 in particular is arbitrarily hard and ultimately made us call it a day for the purposes of getting this review written in good time.

There’s parts of the game where you’re called upon to take a stealthy approach, while snapping necks of unsuspecting goons. But in the marketplace scene you see in the screenshot below you’ll wish you could come out shooting instead of sneaking around. Thankfully in that instance you’ll eventually work out the optimal path. 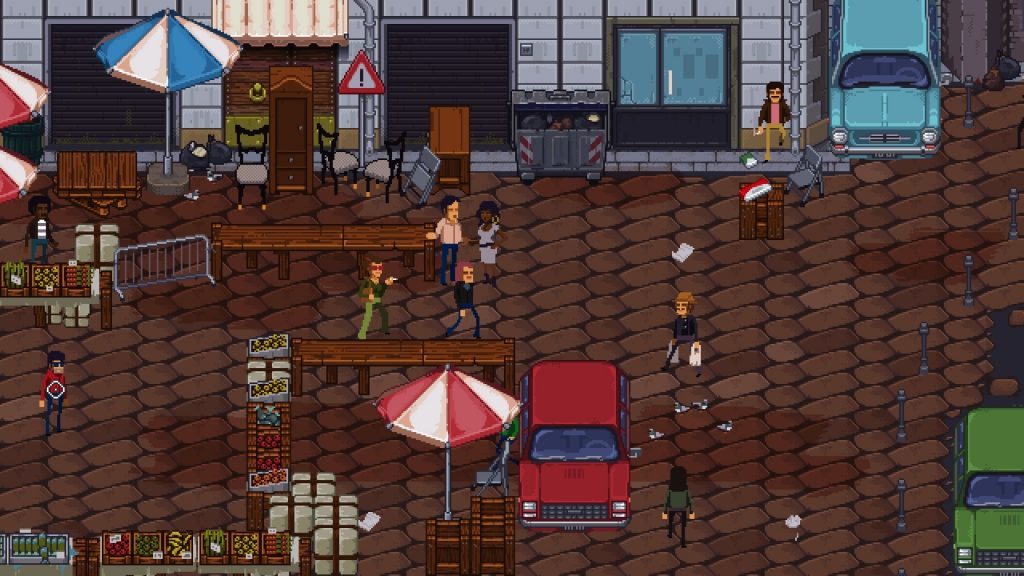 The levels are relatively short but they’re not easy, the default game difficulty is brutal enough. We can only imagine how challenging Hard and Hardcore mode are, they probably become available once you’ve completed the campaign. We asked the dev why checkpoints weren’t saved upon quitting out to the menu and effectively got told to man the fuck up. A fair point. Maybe we’re too cossetted by modern gaming. We’ve a feeling Italo Games would happily up the ante and make you play through the entire game in one run in the style of Ghouls And Ghosts on the SNES if they could.

Despite the difficulty, you’ll keep coming back for more as Milanoir is excellent fun. We’re determined to get past Chapter 5 and see out this story, we just need to work out a strategy to get past the brick wall we kept running into.  couple of times during the storyline, you’ll be railroaded into carrying out questionable outcomes. It rather breaks the illusion of player agency as you feel the strings are being pulled by an invisible puppet master. We understand why this happened for the purpose of plot expediency, but we had the same uncomfortable feeling as we did during the torture scene in GTAV. 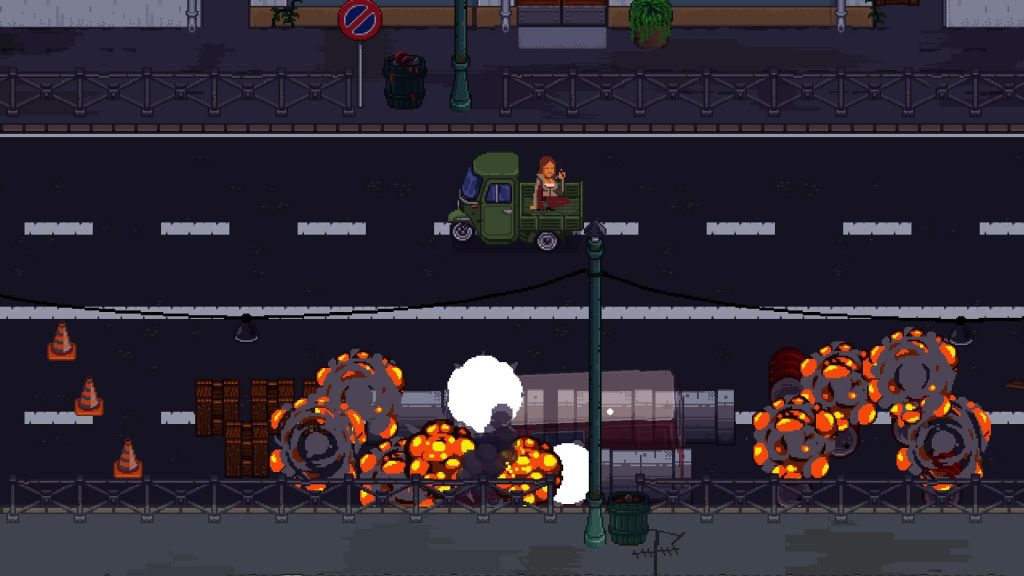 In addition to the campaign there’s Arena aka horde mode you can play solo or via local multiplayer. It too is nails hard in much the same way as the main campaign. We can see ourselves reaching 10,000 points if we got lucky with a run, but the trophies for scoring 50 or 100k are a distant pipedream.

On the subject of local multiplayer, you can play the campaign with a second player. Sadly our co-op partner is a bit young to be subjected to the violence in the game, he’d be sure to drop us in it by innocently blurting out he’d killed lots of baddies. This makes us wish that you could join up with a friend over PSN to play co-op.

In closing then, Milanoir is a very challenging ultraviolent paean to classic crime movies of the 70s that deserves to be played, if only to see out the bleak storyline and kill endless hordes of enemies in glorious pixel-o-vision.

Milanoir
7 Overall
Pros
+ So hard you’ll be spitting teeth
+ Wonderful pixel art style and music
+ Well implemented set pieces
+ Great sense of place and gritty atmosphere
+ Satisfying gunplay
Cons
- So hard you’ll be spitting teeth, let alone beat levels without dying? HA!
- Some chokepoints are overwhelming, the only option is to cheese your way through
- Multiplayer is couch-based only
- You’re a passenger to the storyline sometimes, despite your best intentions
- Clumsily implemented stealth mechanic
Summary
Milanoir is a very challenging ultraviolent homage to classic Italian crime movies of the '70s that deserves to be played. This with couch-based multiplayer makes for an entertaining package.