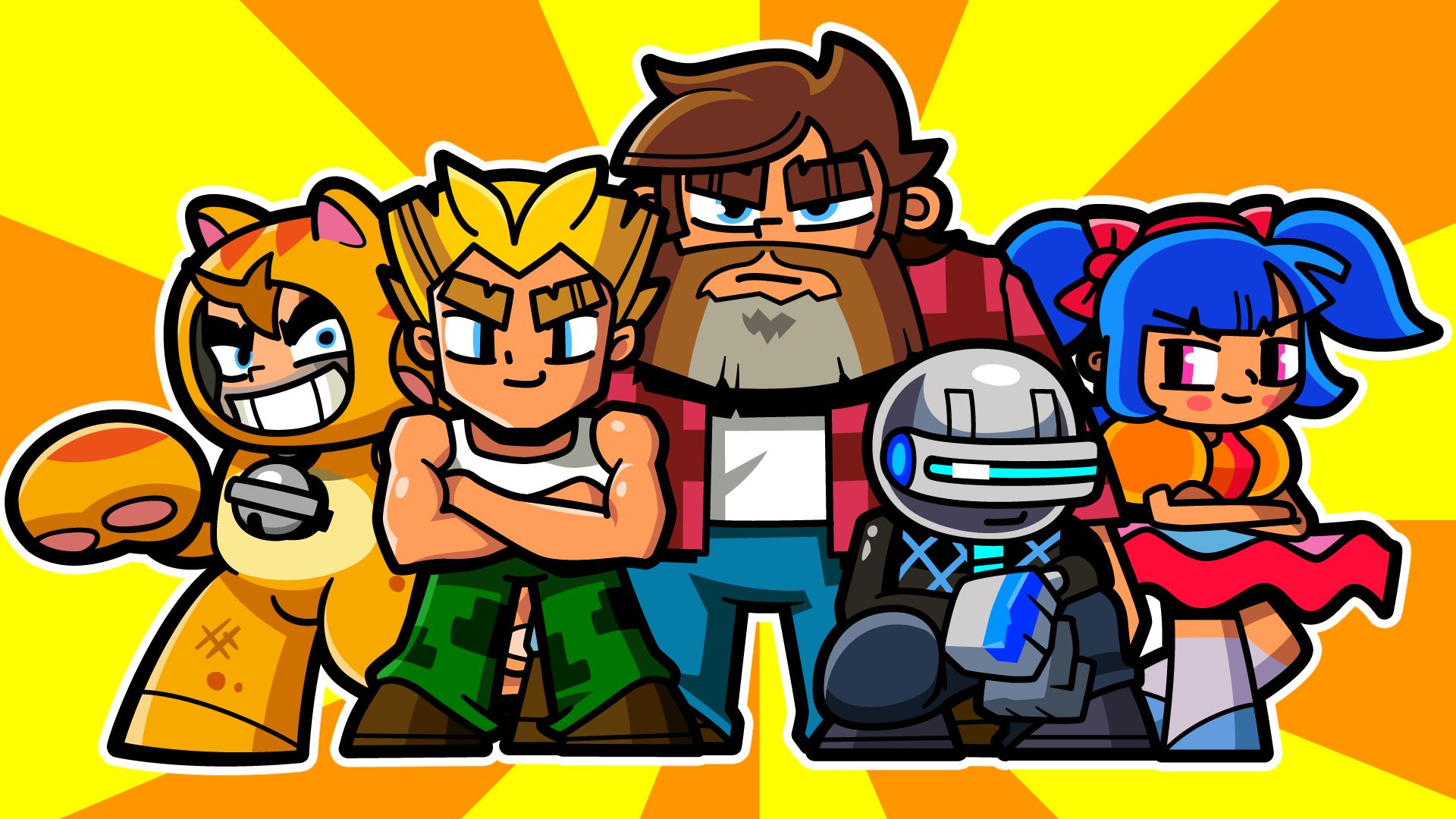 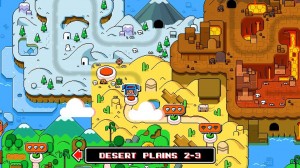 “Arcade style gameplay” used to be one of those buzz terms that made people buy games. Back in the 80’s and 90’s it was one of the most important bulletpoints on a box. Over the years since, arcades lost a lot of luster due to being pushed on the way side in favour of more profitable fruit machines and home consoles. The arcade has returned only recently thanks to the advent of services like Xbox Live Arcade, the IOS store and steam where a steady stream of indie developers who were clearly fond of the golden age decided to replicate and renovate the ailing arcade formula. Adult Swim Games is one of the publishers that pushes this philosophy further, dedicating a large portion of their output to short burst, rapid fire games that tickle that arcade nerve.

Mega Coin Squad is one of the latest games that operates within this category. The title was developed by Big Pixel Studios, a predominantly mobile app developer. While we see a lot of app ports on the PS4 these days, Mega Coin Squad stands above from these usual cash ins. You will be happy to hear that there are no free to play shenanigans happening here, no micro transactions and no wait to win gameplay.

MCS is an action platformer in the same vein as the likes of Bubble Bobble or Rainbow Islands, but given the modern retro overhaul. The single player has you going through a set of sixteen levels based over four different themed worlds. Action takes place in single area and the aim of the game is to collect a set amount of coins while trying to avoid enemies, level hazards and projectiles. This task is made ever more challenging as when you get hit by any of these things you drop all of your coins by default. Each screen landscape shifts and changes as you play, spawning new traps, enemies and of course, more coins. It can seem frustrating at first as your character is pretty useless with only running and dashing in your arsenal but as you progress you can unlock more abilities to make your life easier and this is where the core of the game kicks in. 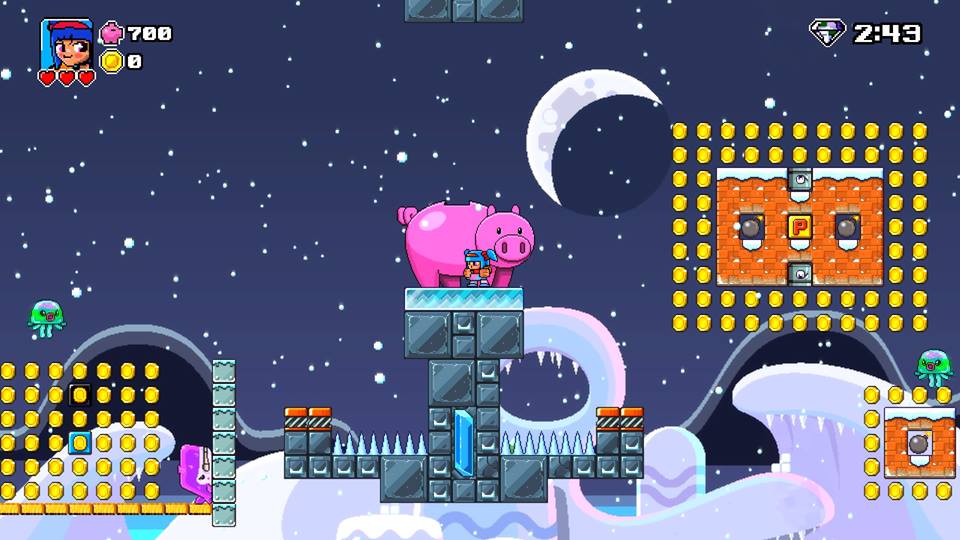 Each level has a three star structure. The better you do the more stars you unlock and each star can be traded in for an upgrade to your core abilities. You can upgrade to allow your character a double jump, boosting your dash range and even add a few more valuable seconds to the otherwise restrictive time limit. You can completely ignore these extra abilities if you wish but all in all this makes the game a hell of a lot more difficult as the level structures become more complicated and hazardous. As you progress through the latter stages of the single player mode you will find these abilities far more useful and the benefit is is that you can always go back to earlier stages to improve on the amount of stars you had previously. This makes the game quite addictive, it adds to the “one more try” mentality as you go back for more stars and more improved attempts. The only thing that makes this annoying is the lack of a quick retry feature, having to wait for a level load can break up a good flow but that is a relatively minor issue.

That is pretty much it for the single player mode. The big problem with this is that there is not much to see. There are a number of characters you can pick from which have varying stats in speed and strength but overall there is little in the way of variety between them. However if you wanted you can always go through the campaign with each of them to improve your overall time, hunt for trophies or work to unlock some more characters for the multiplayer mode. Having your friends round is the best way to enjoy Mega Coin Squad. It becomes a riotous scramble for currency as your and your friends battle each other for big gains to bank before the others can. There are other modes as well including Hold the rainbow where a player needs to hold a rainbow power up that collects coins as the player moves, making this an epic game of cat and mouse, Mega coins in which players have to fight over larger coins for points or just your plain old garden variety deathmatch.

This is where I believe the game falls short of a £11.99 recommendation. These modes are fun and the gameplay is satisfying enough but there simply is not enough content if you are looking to play alone. Likewise the multiplayer is local only, so if you are like me and have no friends then half of the game is locked out to you immediately which is never fun. I understand that people still mourn for the days of when local multiplayer was a big thing but to completely ignore online is a bit lazy when this game would be all the better for it. 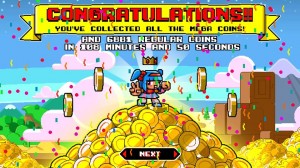 The main thing I can commend the game on is its presentation. Mega Coin Squad nails the retro aesthetic and the music is fantastic, it says a lot when you can still enjoy a track even if it restarts constantly due to character death. As previously mentioned, each level has different themes including a forest style, snow world, desert world and the ever classic lava based world. Not much changes between these styles bar the aesthetics and the enemy and hazard styles. It looks great and serves its purpose nicely but I will say on the same token that this is nothing new. In fact you may recognise some aspects from other games from gaming past especially with the inclusion of enemies that resemble Thwomps from the Super Mario franchise, a design which Big Pixel Studios have made no effort to hide.

Mega Coin Squad
7 Overall
Pros
+ Fun, fluid gameplay + The modern retro pixel aesthetic looks great + The music is completes the presentation of the game nicely
Cons
- Single player is incredibly short lived - Multiplayer is local only, limiting the game further - There is no quick reset option upon death
Summary
Mega Coin Squad is a fun distraction but something that will sadly not turn your head for long. There are many other games like it but few do the gameplay and addictiveness as well. I would be hard pressed to recommend the game for a lone player as the single player just does not warrant the asking price alone but if you have a few friends around you then you may well have a good time.