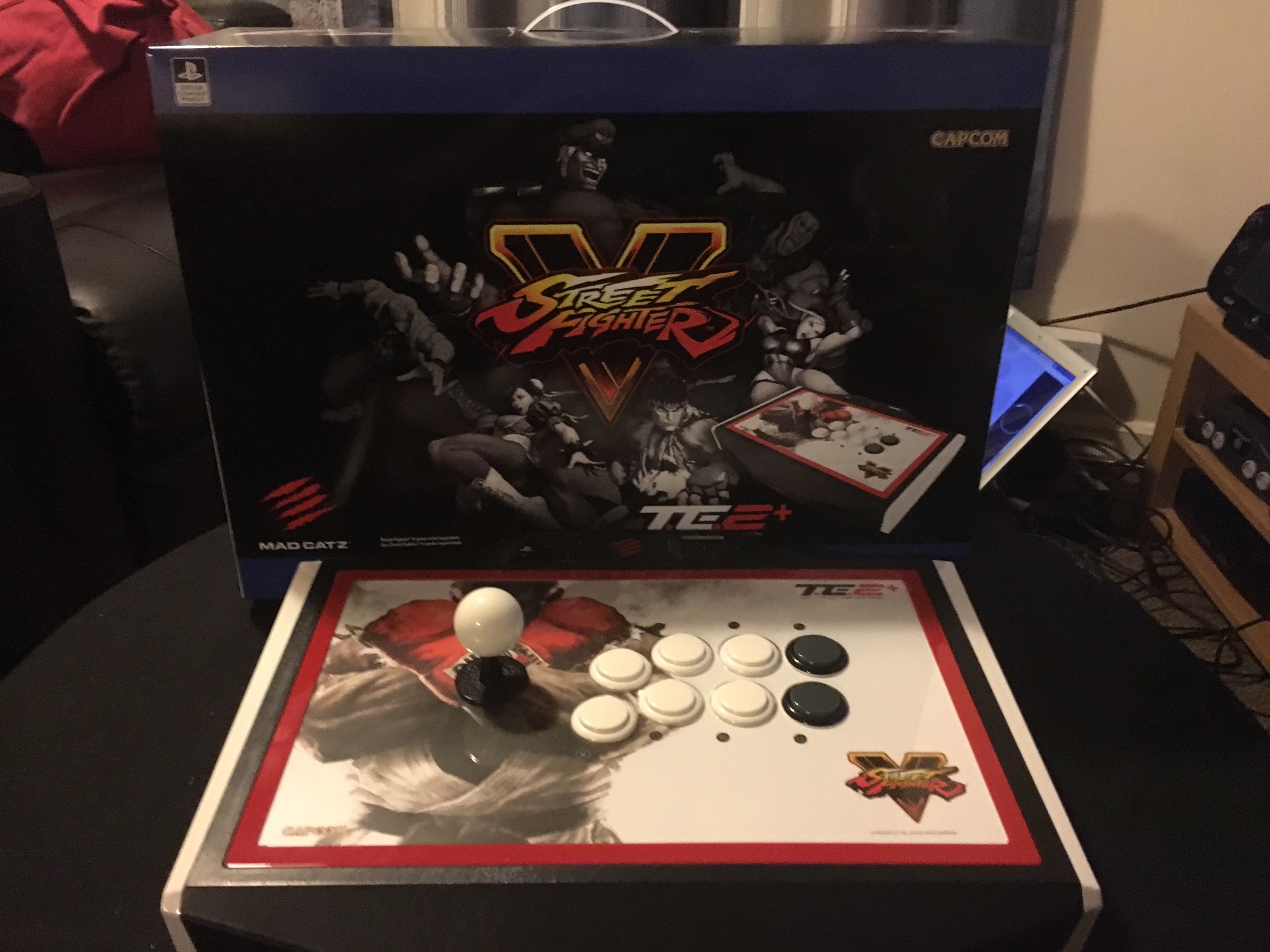 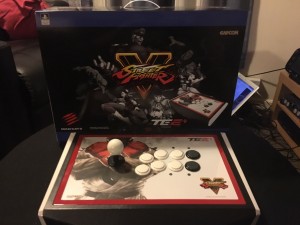 Mad Catz are a bit of a strange one. They have been around for a long time, providing off brand alternatives to official efforts ever since 1989. While the idea of a peripheral manufacturer being around this time is nothing weird, the strange part is is that Mad Catz’s previous reputation consisted mainly of the products that you would give to your younger brother or friend when they came over because the controller wasn’t nearly as good as the real thing.

Times have changed and ever since the Xbox and PlayStation 3 Madcatz have been clawing themselves a name by making great quality accessories for enthusiast gamers. Since Street Fighter IV we have seen a steady stream of high ticket arcade sticks that have fulfilled rightful places in the fighting game tournament circuit, to many being the fightstick of choice when facing the hardcore masses in their natural habitat.

I am a recent convert to the way of the stick myself, on the launch of Street Fighter IV I pushed aside my pad mashing ways and decided to try and do things right. I picked up the original Tournament edition and while it took some time to adjust to the different control method I soon found myself in love with the ease of control and ergonomic layouts as my special move executions began to improve ten fold and I actually started to claw at some satisfying victories when before my Sagat was a flailing mess.

Enter the new generation of consoles, Like many I migrated to the PS4 from the Xbox 360 and decided it is time to get a new stick for the next generation of fighting games, The pinnacle expectation would be for when the new Street Fighter game launched, when this happened I shot straight for the flagship and picked up the Tournament edition 2+.
Upon first removing the hefty peripheral from its box you can immediately feel the build quality of the this accessory. The stick is heavy and cast in solid metal and plastic, while this may seem uncomfortable for longer playtimes I am happy to report that after a good four hour session of Street Fighter V I didn’t notice any fatigue at all with the thing firmly fixed on my lap throughout the duration. Underneath the stick is a soft foam which cushions the hard bottom of the base while it is resting on the legs, the added benefit being that the foam stops the stick from moving and flying off when the battle gets heated. This also applies to surfaces like tables if you prefer to have the stick in a more neutral position and don’t want it to scratch the fine mahogany. 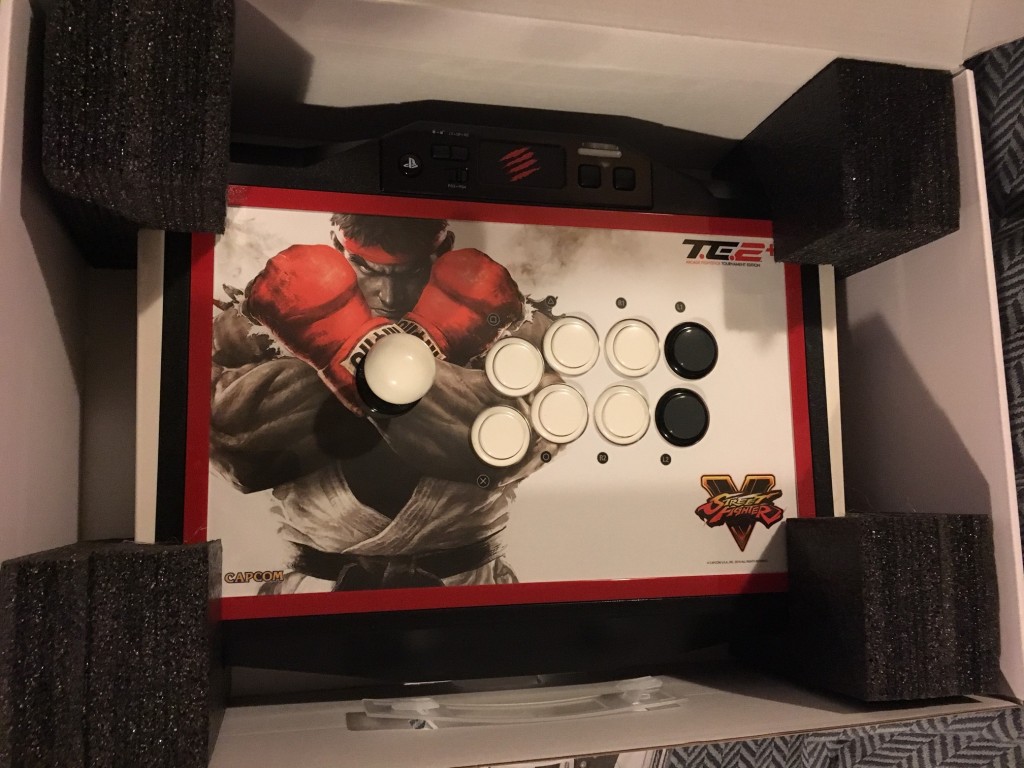 The real meat and bones of the peripheral of course is the stick and buttons themselves. The layout is an eight button array set in the standard Japanese button layout for Street Fighter. The brand of buttons and stick are all Sanwa parts which are also used in the likes of the arcade machines themselves. This is not only for authentic feel but also for maximum durability as these buttons can be hammered millions of times before even showing a sign of breaking. The convex buttons feel light and can trigger with minimal presses for those that prefer a lighter touch. The stick is restricted with a square gate which depending on your opinion is considered the best stick gate currently due to freedom of movement and ease of utilising charge characters due to the straight edging. It certainly helped my efforts with learning characters like Chun Li and Guile whose moves were particularly difficult to pull off with a pad without erratically jumping towards a coming shoryuken.

The Tournament 2+ also comes with an added feature. The stick base can be opened up easily using either the included screwdriver or by simply pressing the illuminated button on the frontside of the stick. This reveals the internals of the stick base and provides easy customisability or repair. This opens up modding oppurtunities, Don’t like the stick? Switch it out with a different one, want LED buttons? Go ahead. Personally I am not one to mess with internals unless I need to, however after spending the asking price on a quality stick it is certainly nice to know that if a button goes faulty outside of warranty then I can simply just swap it out relatively inexpensively. This stick was designed to be taken around tournaments and local fighting game meets, so there are even storage holes for spare buttons if you have a tendency to hammer them a bit too hard. Mad Catz have done everything they can to make this peripheral as moddable as possible, including down to the art on the stick itself. Which if you do not want Ryu scowling at you then you can switch it over to another image as you like as long as you follow the button template. 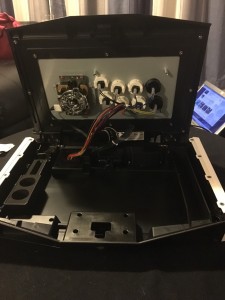 For those still stuck in the previous generation also will be happy to hear that this stick will also function with their PS3 with the simple toggle switch at the top of the deck. This opens up the stick to be used cross platform with PS3, PS4 and PC without any further adapters required. Making this pretty handy if you have a collection of Steam games that allow direct input (hilariously, the PC version Street Fighter V not being one of them yet.) For the PS4 this is the only stick that features a touchpad in the Mad Catz stable, while not an essential feature by any means this does give you access to some easier training options in Blazblue and Mortal Kombat X chat commands.