I’ve come across a few cooperative puzzle platformers in this job. Whilst it never quite feels like there’s a surge behind it, they seem to trickle through every few months and largely prove to be decent. Kinduo comes from Nibb Games, a three-person studio that’s been fairly prolific on Steam. They seem to specialise in smaller, cheaper experiences. Unfortunately, Kinduo‘s stature doesn’t inspire much conversation in me. 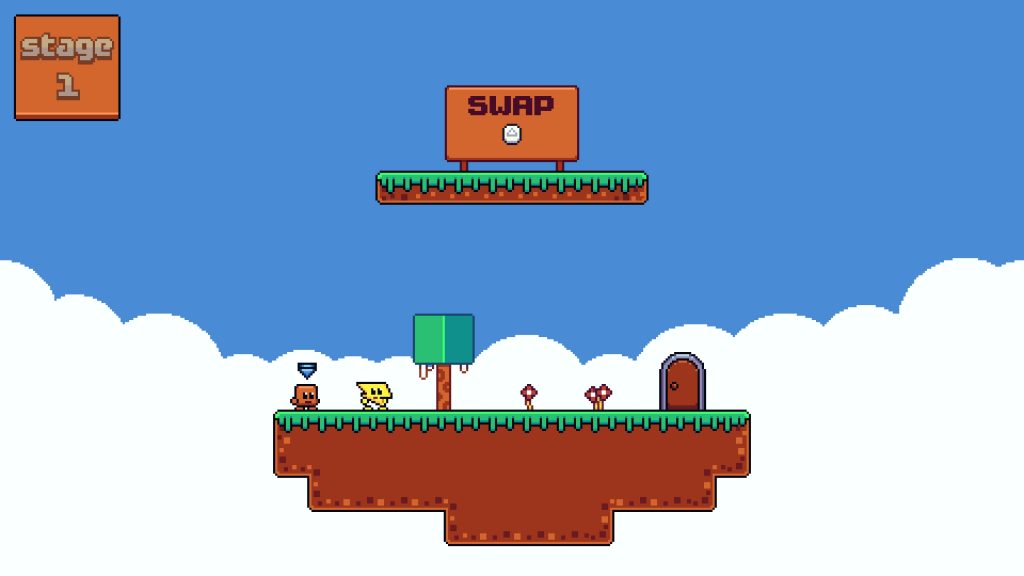 Kinduo‘s story settles on a premise and not much else. Our two elemental buddies must find their way back to their home island. To do so, they’ll push, dash, jump and smash their way through 30 stages. This is presented in some fairly cute animation panels that arguably carry more charm than the in-game counterparts. These bookend the campaign with no other interludes to speak of.

As a result, Kinduo rests largely on its gameplay. It is, in essence, a cooperative puzzle game where you control two playable characters. The brown block can move objects but loses out in agility. The lightning bolt can jump higher and activate lifts. The objective of each stage is to get both of them through the exit. 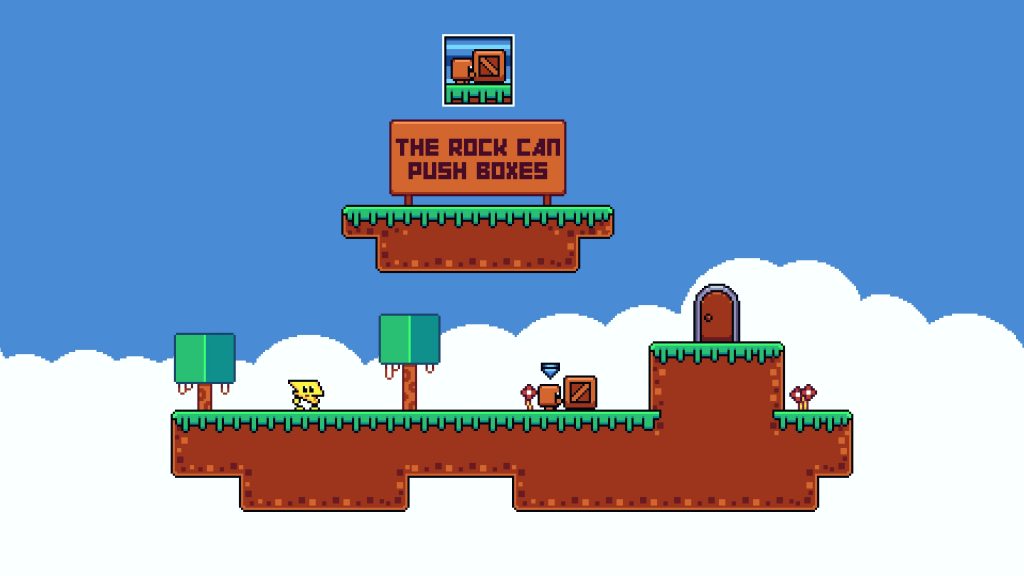 Kinduo‘s puzzles are incredibly simple to grasp. With so few moving parts and a screen that is always in your sight, the puzzles are fairly simple to figure out. That’s not to say things don’t become more complex and mechanically progress. Over the game’s 30 levels, new elements are added and the duo gain new abilities.

The brown block can stomp his way through icy platforms whilst the lighting strike can dash over distances. They influence the upcoming challenges and you can take these earned abilities to previous levels. There’s no reason to do so but anybody fancying a speedrun might be so inclined. The very small toolset at their disposal does make this game feel efficient, if miniscule. I found myself through in about 90 minutes and with very little in the way of blockades. The puzzle designs aren’t really there to tease you and it becomes quite breezy to saunter through it. 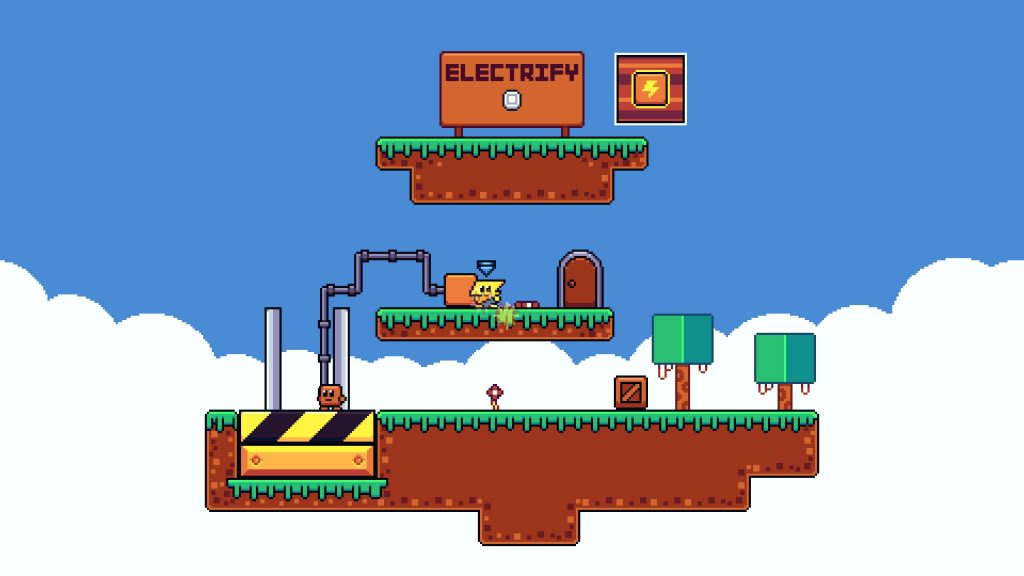 The levels do add more moving parts as you traverse more wintery levels. The block is heavy enough to trigger switches and you largely have to separate the duo to allow the other to catch up. It never reaches grand heights but you can see the potential when you have to decide who needs to be where. It complicates further when keys are required to exit the level. It’s not much to think about but it is something.

The two characters behave predictably and, should you find an accidental death, you’re not set back far. These levels can take a mere minute to beat and it’s only really the very latter stages that could stump a few players. The nature of the puzzles also allow for solo completion to be pretty easy. There’s no timing involved so you can focus on just having the two characters in the right places.

Visually, it’s kept pretty simple. There’s a pixel art presentation that can come off looking pretty cheap. It does help draw your eyes to the parts of the screen that matter and it is colourful, at times. It’s not especially detailed but there are some sneaky interactive elements to the stages that can fire off a couple of trophies. 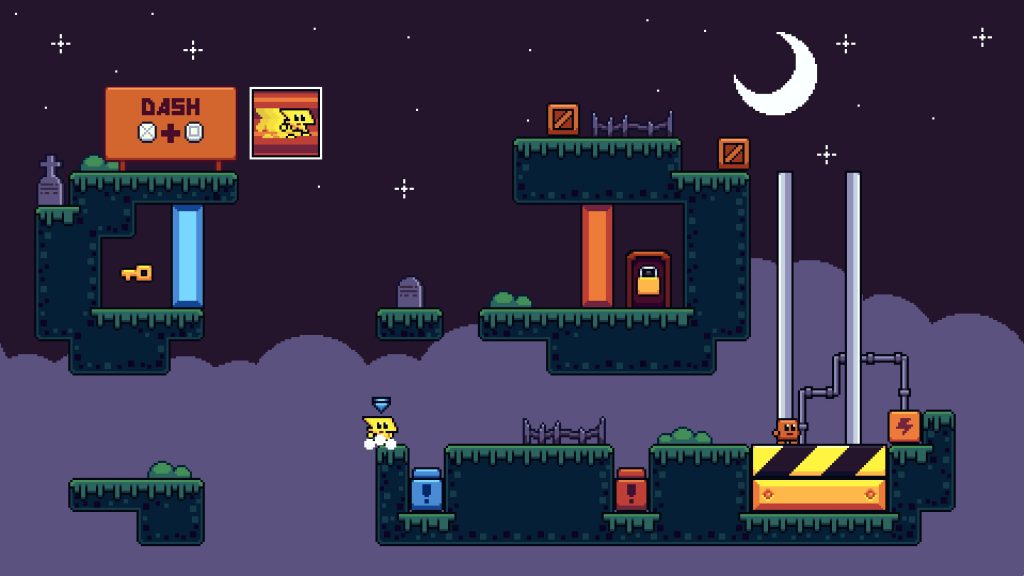 Sound remains very much the same with a chiptune score that doesn’t really raise the needle much. That’s in-keeping with the rest of the game but it does mean I struggle to talk about it. I do like the flourish the dash move and stomp gets but Kinduo is largely a game you’ve seen before. It doesn’t feel like a game that misses the mark that’s been set but I certainly feel the bar is low. As a result, it’s a game that’s forgiving and swift to the finish. There are potential failures and moments of no return that are undone by a quick restart option. I can’t really be frustrated by a puzzle game so leisurely in its approach.

On the one hand, Kinduo is relaxing carries a lot of momentum. Unfortunately, I find it very hard to write about games that are so short. Mechanically, it’s sound but if feels like a bitesized effort from, admittedly, a small team. It also carries a small price tag. Visually, it’s not huge interesting but it does carry some colour and I do think the puzzle design flirts with being interesting without delving into something complex. It’s just a shame I can’t find something more notable to talk about.

Kinduo
5 Overall
Pros
+ Incredibly forgiving.
+ Levels are quick and give out a great feeling of momentum.
+ The abilities of the characters work well together.
Cons
- Incredibly short and brisk.
- No real reason to replay old levels.
- Bland presentation.
- Has some interesting ideas that don't get explored fully.
Summary
Kinduo is a small, forgiving effort that I think new, inexperienced players might enjoy. As short as it is, there's an idea here that doesn't get explored fully. It's cheap, light and short but I do find it difficult to talk about a game that's over so suddenly.  It's an okay little thing that maybe doesn't reach for more.  At times, this feels like a polished prototype.  Sometimes it's nice to blast through the dozens of levels but I'm not feeling challenged in the process.  It ends up passing me by, to be honest.