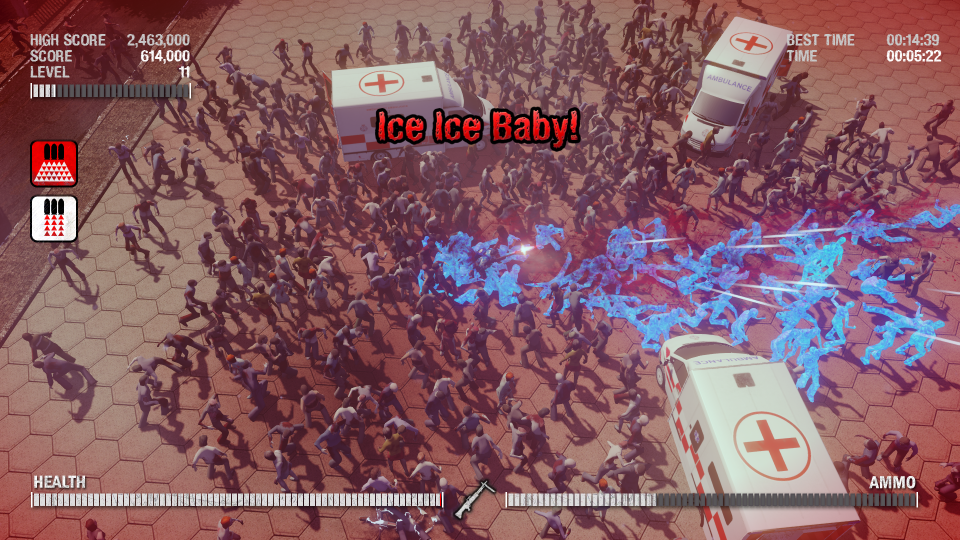 UPDATE:  Check the bottom of the review for a change from the original 7 out of 10 score.

If you’ve ever played Crimsonland from 10ton Games, #killallzombies by Beatshapers is basically that to the point where we assumed it was a sequel.

That means this game sees you running around a large-ish arena, fending off hordes of zombies that spill in from all sides. It’s standard twin-stick fare with no meaningful other controls beyond a melee attack and a pointless reload button. Every once in a while you earn a choice of four random ‘perks’ many of which are helpful, some of which aren’t so it is up to you to figure out which ones are best. That is pretty much identical to how Crimsonland works. 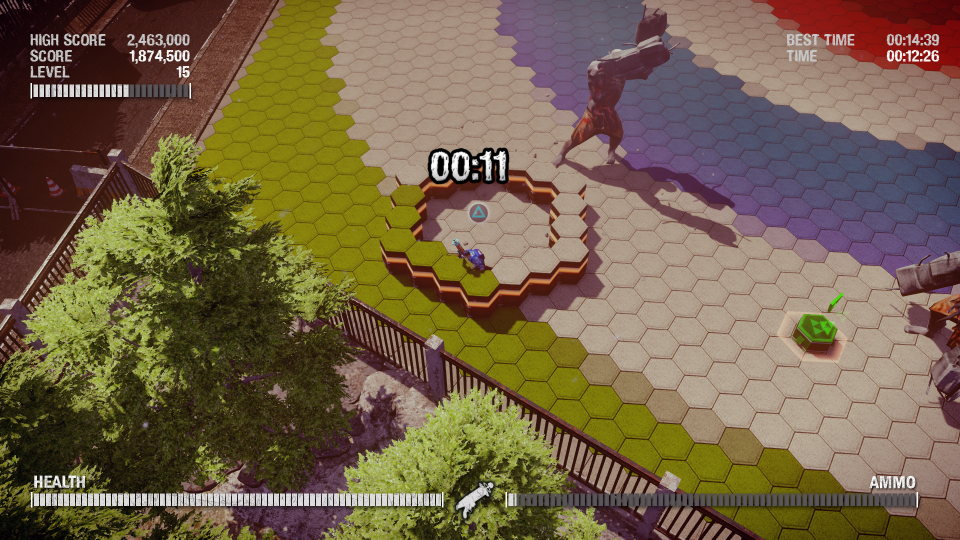 However, #killallzombies offers more modern presentation that both looks nice and also has a practical element to it too.   The ground is made up of hexagons that either provide background patterns or will drop and raise occasionally, altering the paths zombies have to take to get to you while often obstructing your escape. It’s a nice bit of additional depth to proceedings and is a real improvement.

Also, vehicles will randomly drop in from the sky. These can only be destroyed but are good for crowd control and they drop health and EXP pick ups too. Although they can land on your head and kill you outright if you’re not careful (or if you’re just me a lot). Again, it adds some much-needed tactical elements to the gameplay. 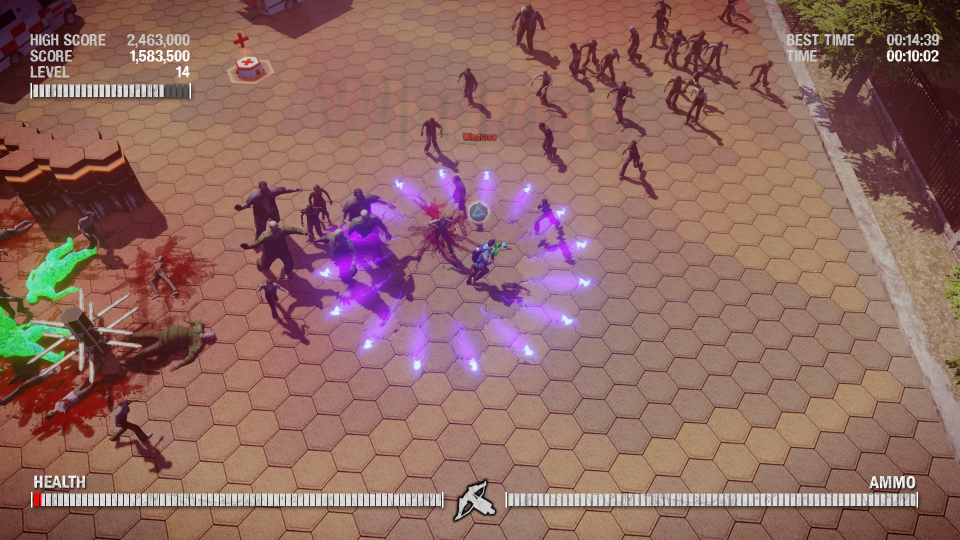 Beyond that, there’s not a whole lot else to #killallzombies. This is just a ‘weight of numbers’ shooter where ultimately death is going to eventually get you when the zombies attacking you outnumber the amount of bullets you can fling at them.

One of the gimmicks of the game is that it’s meant to be a Running Man-esque TV show and if you broadcast your gameplay, viewers can choose your perks. This is interesting (although I only attracted an audience of two people as it was my first time on Twitch) but here’s one of the major flaws with the game. There are perks that kill you.

So if you’re having a great run and doing well, it is positively galling to suddenly die outright because some random has decided a perk that kills you is a good idea. They need to fix that a lot. In fact, let’s just lose all the bad perks right now. Why are they in there? 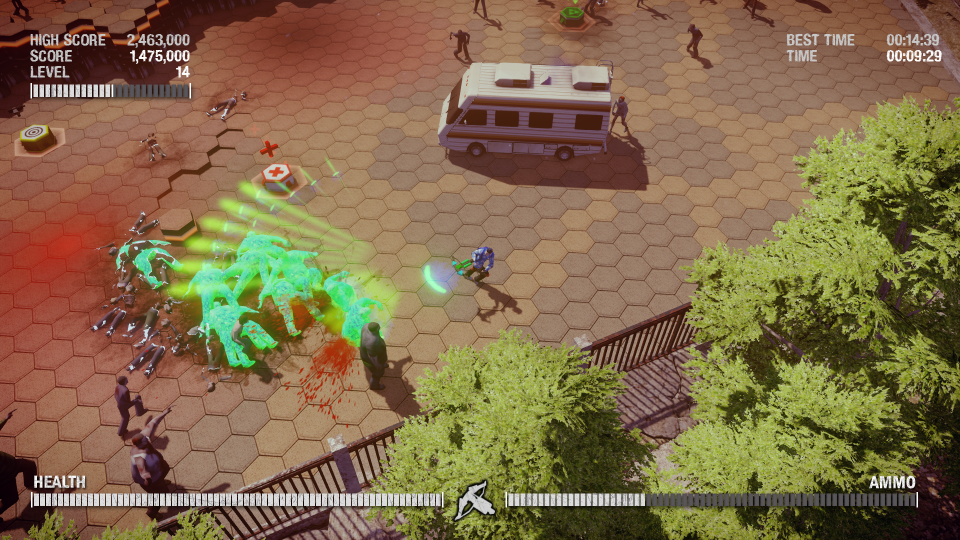 Another issue is that when you start the game you see a choice of three modes but two of them (Co-op and Vault Defence) are locked out until the devs add them later on which makes the game feel unfinished. In fact, feel is the wrong word. It is unfinished. Blatantly.

However, the game is addictive and fun to play and it gets by on pure gameplay alone for me. When they add the co-op mode in particular, this game could get a lot more interesting.

There are faults. Major ones. But I can’t help but enjoy #killallzombies a lot. It’s a slightly above average arcade shooter that it oddly compelling to play and I enjoy the stark, modern presentation. With the additional gameplay promised in the future, this could well be a minor cult hit. 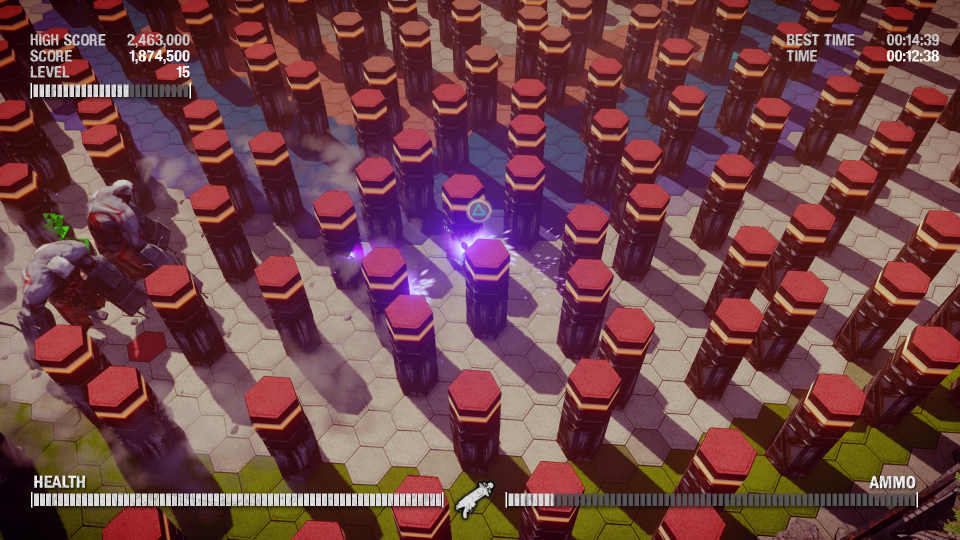 2020 UPDATE:  since the original review a couple of things came to light.  Firstly, they added the extra modes and it turned out that the Vault Defence mode was brilliant.  It had you using turrets to defend the centre of the arena and these could be upgraded over time.  Combined with the perks system, this made for a truly excellent mode and one that would have bumped the game’s score up from a 7 to an 8.

However, this also highlighted a massive issue with the game.  It generally crashes after 40 or so minutes of gameplay.  You might make it to an hour but the odds are that you won’t.  The game is going to crash in the majority of cases.  This is, of course, very frustrating but is compounded by the fact that it’ll likely wipe your save data which is infuriating especially if you’re working to kill 500,000 for the Exterminator trophy.  Note: your mileage may vary but enough people have experienced this for it to be a problem.

So, I contacted the devs about it and got complete radio silence.  Given that this is a known issue on the PS4, Steam and Xbox One versions of the game, that’s pretty shoddy.  However, they released a Switch version and I was interested to see how they got around the issue there.  And this is where things get a little bit shameful.

The Switch version adds a small but important change to the gameplay.  In the Vault Defense mode on the PS4 version, you are safe from random deaths brought on by hexes in the background rising up as long as you stand by the vault.  In the Switch version, this isn’t the case.  What does that mean?  Well, it means that you can be instantly killed where you stand with no way to anticipate it or mitigate it.

Why would they do this?  Well, one reason would be that it kills you before the crash happens.

Yeah, #killallzombies, you’re getting a 3 now.

#killallzombies
3 Overall
Pros
+ Frantic, chaotic shooting action
+ Highly addictive
+ Clever Twitch integration
+ Very stylish presentation
Cons
- Game will crash on you and mess up your progress
- Boss battles are chore
- Gets very difficult
- One hour trophies do not mix well with arcade pick up and play shooters
- Some of the Twitch commands are too harsh
Summary
It may have a stupid name but #killallzombies is initially a lot of fun. What's less fun is the way that it crashes when you are doing well and the fact that they never patched that out.