If you’re going to put ‘Jet Set’ at the start of your game’s title, you’d better come correct given the proud history of that prefix (we’re thinking Jet Set Radio and Jet Set Willy) but here we are with Jet Set Knights, the latest Ratalaika release.  The game is a curious mix of hack and slash, RPG, tower defense and a handful of classic arcade games.  The influence of the latter being a 2D pixel art style and a series of one-screen layouts in the style of Bubble Bobble, Rodland and Snow Bros.  It comes by way of one man developer Tibor Fobel, albeit with a little help when it comes to the game’s sound effects and music.

We very recently reviewed Tamiko which had a good go at recreating that ’80s coin-op style of gameplay but was ultimately a little bit too derivative but Jet Set Knights does a much better job of combining classic stylings with a few new ideas.  The classic elements are as expected.  Running, jumping, killing and collecting.  All the hits.  But this is mixed in with some other stuff too.

You play as one of the titular knights (although the game also supports two player co-op) and your job is to protect a princess who stands at the bottom of the centre in the middle of that floor.  Enemies enter the level from two portals at the top of the screen and will kill the princess in one hit if they reach her.  Thankfully your knight is a fair bit faster than them and is armed with a sword, so stemming the tide of enemies isn’t too tricky initially.  However, things do get harder (especially on Normal or Hard difficulty) and so you may end up needing some help. 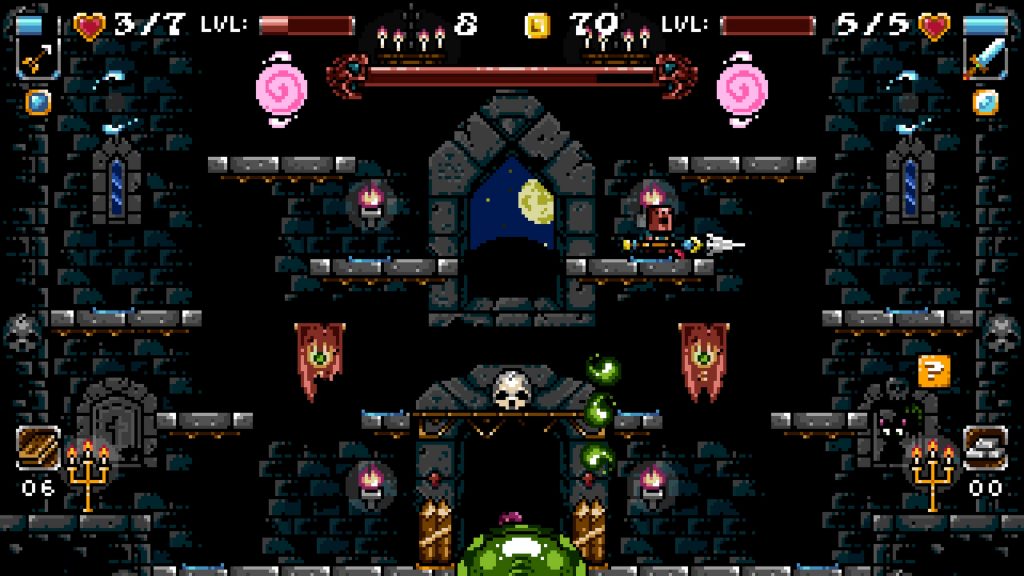 That comes from the game’s tower defence mechanic.  If you’ve got some steel and some wood (both of which are random drops during gameplay), you can build walls next to the princess which can take a couple of hits and you can build turrets on specific points of the levels.  These will shoot enemies if they get too close, which they will as the AI just keeps walking until it hits a wall, and turns around, or drops down a level to the next layer of platforms.

Defeating enemies gives your knight a little bit of EXP too and this eventually allows you to level up, usually a couple of times before a level’s boss encounter, giving you the opportunity to put a stat point into your attack power, speed, critical hit chance or health.  Health tends to be the best choice as it increases your max hitpoints while also giving you a health refill.  This is the only meaningful upgrade though as the others are either useless (speed) or too subtle to make a meaningful difference.

The game drops random power-ups into the play area as you go along.  Chests contain arrows which eventually get upgraded to fire and ice variants, allowing you to keep your enemies at range.  Other power-ups include one that transforms you into a sort of Pac-Man-ish character that can eat enemies, a lance that insta-kills enemies on contact, health and speed boosts and a weird cat that protects your princess by firing lasers at enemies.  They’re all pretty useful and plentiful enough too. 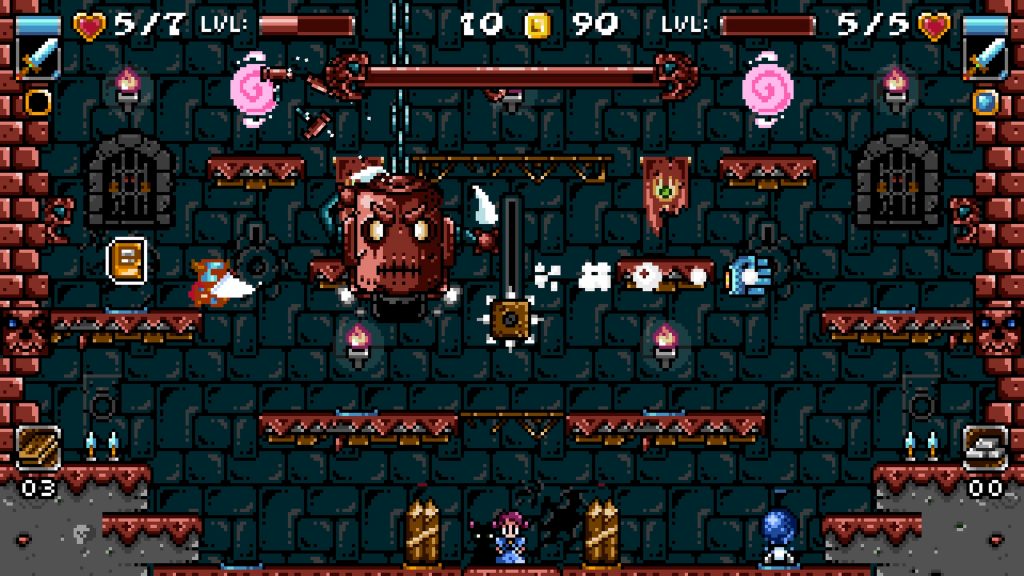 There are also five knights to play as (although for the life of me I can’t unlock the fifth).  Aside from looking slightly different, they all have a charged ability.  Arthurus has the best one, holding down the attack button lets you shoot out a focused shot which destroys enemies as it passes through them.  This also is very effective against bosses if you want to keep your distance.  Lanslet’s eight way burst is less useful as it doesn’t penetrate enemies.  Jarvis creates a poisoned cloud that is far less useful while Wisgarus’ fireballs are similarly useless in a way that’ll provide some nostalgia to those of you that remember Ghosts ‘n’ Goblins.   We’re not sure what tricks Jimi Warp has and the game doesn’t seem too bothered about telling us what to do to unlock him.

These elements all combine to make an arcade-style game that feels both familiar and fresh and is genuinely enjoyable to play in quick bursts.  The game’s levels all feel different enough and present interesting challenges, although there are only a handful of them.  A separate stop on the levels map offers a casino where you can win artifacts and a selection of mini-games.  Again, the game offers no info on how to unlock these mini-games (you have to play on Normal or Hard but beyond that we don’t know) but the slot machine in the casino does allow you to unlock handy artifacts.  You can only pick one at a time but they offer damage and attack bonuses, a handy double-jump or even a guardian that follows you around and shoots anyone that gets too close. 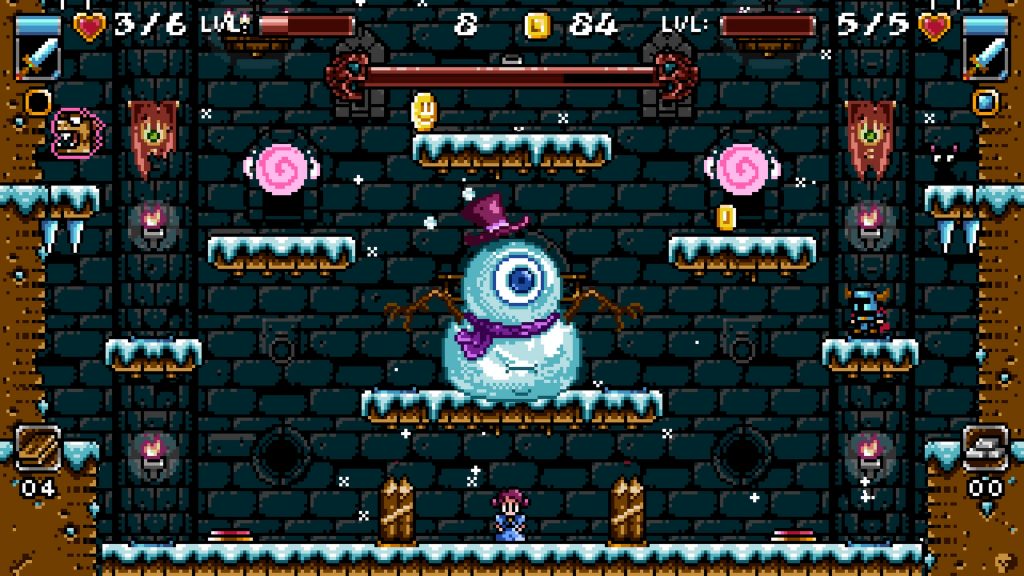 The only area where the game lets itself down is in the boss battles.  These appear after wave 4 of any level and do not return.  In terms of the trophies all you need to do is beat the boss.  It’ll drop the key that unlocks the next area of the game.  However, you can keep going just for fun.  The problem is that the boss battles are a little uneven.  For example the penultimate boss was a lot harder than the final boss, although nothing in this game is particularly taxing.  And the tower defence elements don’t apply to the bosses which makes them feel out of place compared to the rest of the game.  In and of themselves, the boss battles are okay and provide a nice break from the rest of the action but they don’t really fit in.

Aside from that, there’s not too much to worry about here, especially for the price.  Jet Set Knights is a playable take on a classic genre and one that offers some pretty good ideas.  If you’re over the whole 2D pixel art and chirpy chiptune music thing, the game might seem a bit more tired to you but overall it’s a pretty enjoyable budget title and certainly one of the better Ratalaika games to date.

Jet Set Knights
7 Overall
Pros
+ Good mix of gameplay mechanics
+ Very playable and accessible
+ Good for pick up and play and casual coach co-op
Cons
- Trophies are a bit too easy
- Presentation isn't particularly interesting or novel
- Doesn't have many levels
- Boss battles feel out of place
- Upgrades feel weak
Summary
Jet Set Knights is a modern take on the old 2D one-screen platformer genre and throws a few ideas at it. Some of those ideas work, some need fleshing out but overall this is a game that is cheap, playable and enjoyable.