Hood: Outlaws & Legends is a 4v4 multiplayer mix of stealth, melee and archery from the very well-established Sumo Digital and is their next game after the PlayStation 5 launch title Sackboy: A Big Adventure.   The game is a PvPvE kind of affair which is to say that you and your squad will be fighting against the AI in the game and a team of humans too.

Set around the mythology of Robin Hood, the game sees both teams playing as a team of outlaws vs. “the State” who are the authority there under the notorious Sheriff of Nottingham.  Each team of four is tasked with infiltrating the area, which is patrolled by AI guards, lifting the vault key from the Sheriff using the game’s stealth mechanics, liberating the treasure (which is in a chest) and then taking it to an extraction point where up to two players can winch the treasure out of the area.   This last phase takes some time and so your squad will need to work together to get the strongest members winching while the others defend them.

If you win, you can then either take the money to spend it on weapons and customisations or give it to ‘the people’ which just means you can upgrade your camp which just improves the shops and therefore the items you can purchase.  It’s not quite robbing from the rich to give to the poor, but it’s nicely framed within the Robin Hood mythology. 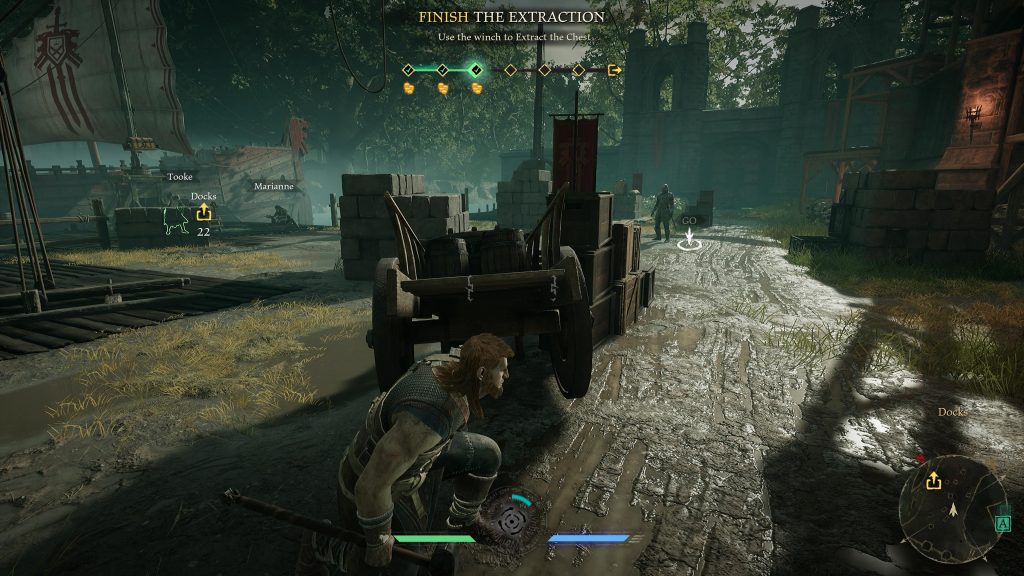 In terms of the gameplay, a tutorial mission teaches you the basics of heisting.  You play a section as each playable character, learning their abilities and advantages as the game directs you through the three phases of the game (stealing the key, grabbing the treasure and extraction).  The four playable characters act as different classes essentially.

Robin (either Robin of Locksley or Robin the Earl of Huntingdon depending on which team you are randomly drawn in) is your long-range sniper, firing arrows at long range targets (well, mid-range really as we’ve just been playing a different game with sniper rifles in it), Marianne uses stealth kills and smoke grenades, John is your tank and uses his considerable strength to open portcullises or just smash skulls with his hammer and Tooke is more of a scout.  Squads can pick any combination of these, so you can end up with four Robins or a mix but they do play sufficiently differently enough to keep things interesting.

That said, some are clearly more useful than others.  John is a lot more useful against human opponents than Marianne while Robin has his moments when sniping but tends to be less useful when it’s all going to hell or during the extraction phase.   But you’ll soon find your favourite class to play as. 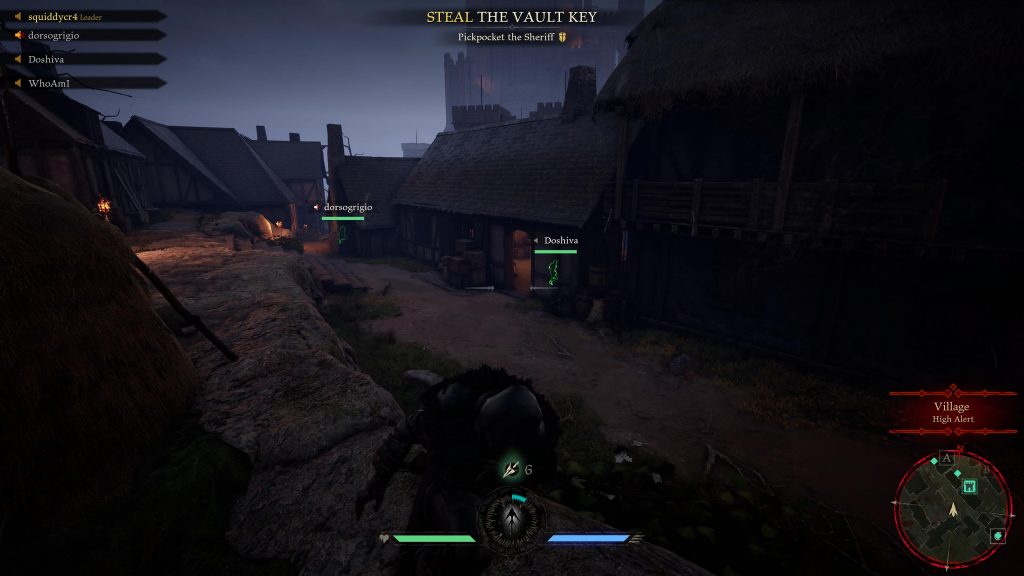 The game plays well though.  Your movement around the map, the stealth and even the melee combat are all enjoyable enough.  Indeed, we kind of wished that there was some single player content because there’s the makings of a decent stealth game here.  You can opt for the training mode which is where four of you work together against the State with no enemy team and that’s actually quite enjoyable but the main meat of the game here is those four vs. four battles and they are good.  We found our feet early on with Hood, winning our first heist and then having a spotty 50/50 record ever since.

When your team works well together and looks out for each other, you can be quite the force (even when carrying less experienced players like myself).  The thrill of sneaking in and pickpocketing the Sheriff or forming a convoy as one of you carries the chest away (making them helpless) while the team guards them is definitely a real and satisfying feeling.  What’s less good is when the AI and the opposing squad seem to gang up on you or how sometimes you feel a bit underpowered because arrows aren’t that effective against armour.   Also, we found that sometimes stealth kills and even simple actions like climbing ladders would be fiddly because the

prompt wouldn’t appear as immediately as we would have liked.  Hood does feel very slick to play though otherwise.  The controls are sensibly implemented and it all moves very smoothly thanks to the 60FPS framerate. 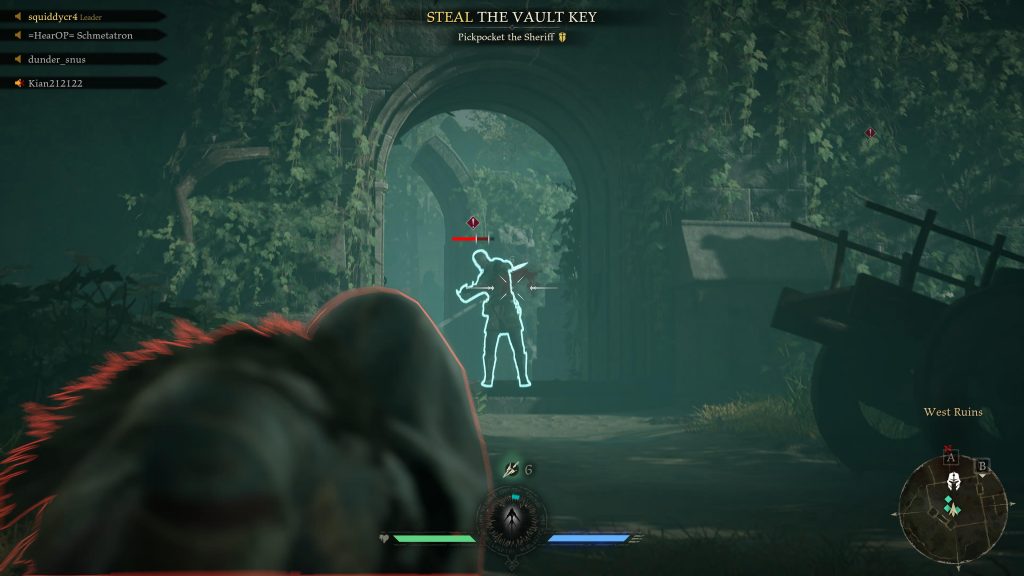 Getting into a match isn’t too difficulty either.  The game doesn’t have a huge community of players but it is reasonably well populated, thanks mainly to the implementation of cross-play.  We did find that even the mic’d up players were silent though but that’s just how it is with many games these days.  People just don’t talk, which is difficult in a game like this that requires a bit more coordination if you want to be successful.  It was a bit harder to get into training missions though as clearly people aren’t as interested in those, mainly because they don’t award you with cash or XP.

Visually everything looks sharp.  The HDR was occasionally a bit over the top, leading to some real glare in some internal locations but otherwise the game is very nicely presented.  The running around in the woods thing means that it can be pretty dark and the customisations aren’t really all that noticeable but it does have a nice mid-budget Assassin’s Creed rip-off thing going on.

The main problem with Hood right now though is the relatively small amount of content it offers.  Once you’ve played a few matches, there’s nothing else to see.  With just five maps and one main game mode, this is clearly a project that it was waiting on some later season passes and DLCs and we can imagine that in a year or two there will be a lot going on.  But you’d expect to see deathmatches, team deathmatches and other modes as opposed to what is essentially a sort of heisty capture the flag variant. 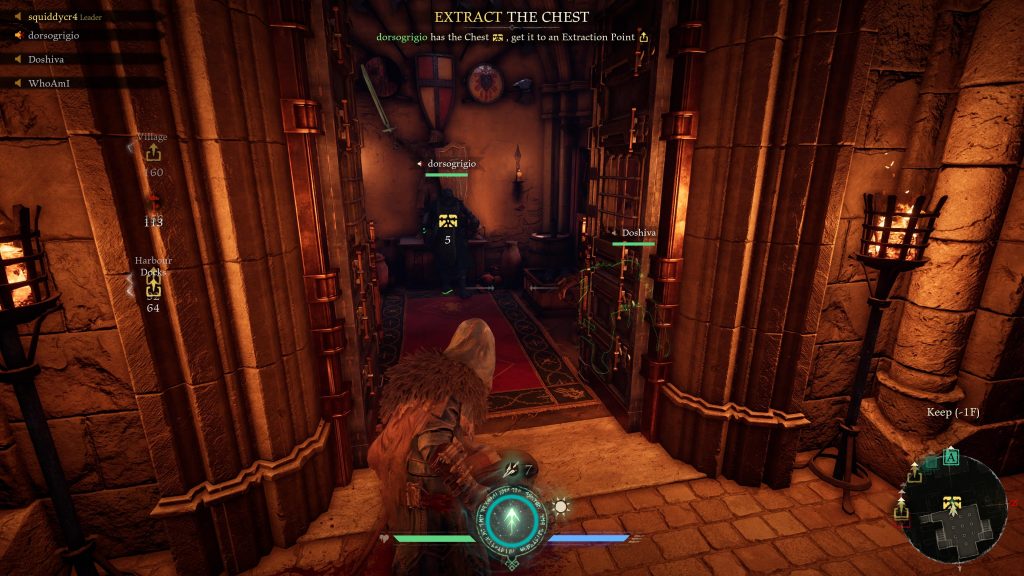 And then there’s the weird way that matches end.  When you get the treasure to an extraction point, that point is used by both teams.  Whoever controls it at a given time is earning the points but how can two teams be extracting to the same place?  It’s probably there to keep the matches shorter but it seems like an odd system and one where they could have given you the option to give each team a proper base.

But look, in a year or so there will likely be a lot more content and, hopefully, much better balance between the classes but by then the game will also be cheaper than it’s current mid-budget price, although will it still have a community playing it?  That’s the gamble.  There’s some fun to be had here for sure but really all the game needed was another year in development to really flesh it out.

Hood: Outlaws & Legends
6 Overall
Pros
+ Matches can be competitive and fun
+ The PvEvP thing works quite well
+ Solid visuals and core gameplay
+ Stealth is well-implemented
+ Cross-platform play is keeping the game alive
+ Good use of haptics
Cons
- Just one game mode
- Classes aren't very well balanced
- Only five maps
Summary
The core gameplay loop of Hood: Outlaws & Legends is fun, violent and competitive but currently this feels like a game mode that should exist in a much more fleshed-out title. The challenge now is for them to keep the community interested while new content is added. If they can manage that, Hood may well go on to be a popular online title.