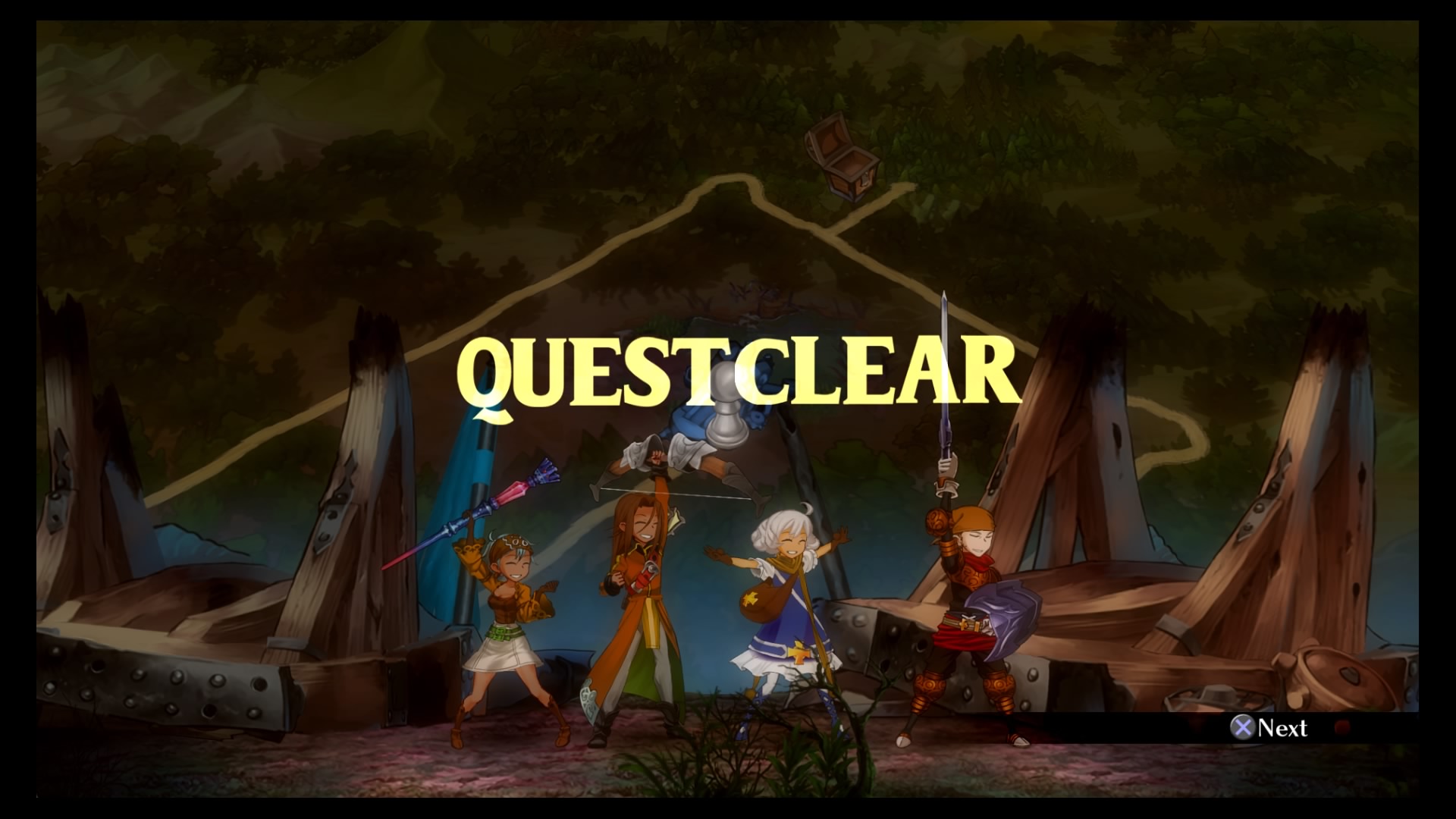 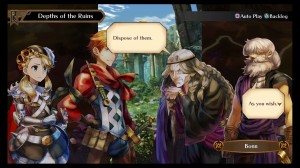 Grand Kingdom is a new tactical RPG from ex-Vanillaware staff on PS4 and Vita. Its mixture of single player and multiplayer elements are certainly interesting but should you be interested?

Grand Kingdom is made up of many parts. Certain areas may seem simple enough but there is a lot of complicated depth to the majority of it. This isn’t true of the story however which starts with you being made the leader of a band of mercenaries. It barely progresses from there however with you butting heads with a rival and fighting the same enemies over and over, though it will take you a decent amount of time to get through it. Luckily there is far more to this game than the story.

The visuals certainly make a good early impression, with the 2D art using a similar technique to what Vanillaware are famous for. Although the actual assets aren’t quite as beautiful, looking far more like traditional anime than the more painted look of Vanillaware’s best the animation is still very striking and even the 2D avatars during the story sequences are constantly moving giving them more life than you’d normally get. The map screens aren’t as interesting but the battles look great.

You move around the map almost as if in a board game, similar to the Go (Hitman, Lara Croft) series of games. As you move so do enemy units and generally you want to get from one side of the board to the other. On the way you can find items, get blocked by hazards and encounter enemies. Each move is counted and if you take too long you will fail the mission. Hazards can be carefully maneuvered at the expense of time or you can rush through at the cost of health or use a precious item. Battles can be avoided to save time or played out to (hopefully) succeed and gain experience.

You take four units into battle and here is the first complication. Much like Disgaea you can mix and match whatever units you want. Well, you actually can only choose from a random list that updates after every mission but there are seventeen different classes that you could potentially choose from. You can hire far more than the four you can take on missions and indeed the multiplayer portion encourages you to do so but I’ll come to that later.

Although some classes may seem similar they each develop differently and finding a group that compliments each other will be a lot of fun for those inclined to do so. You have melee units who can protect others whilst dishing out close range damage, you’ve got archers who will attack from afar, magic users who can apply buffs/debuffs and charge up powerful magic spells, medics who provide much needed healing and others. As they level up it’s up to you which stats you upgrade which can be a bit overwhelming and a little more guidance from the game would have been appreciated in this respect. For example the medic throws a jar of acid as their default attack and apparently this is strength based but I had no idea. 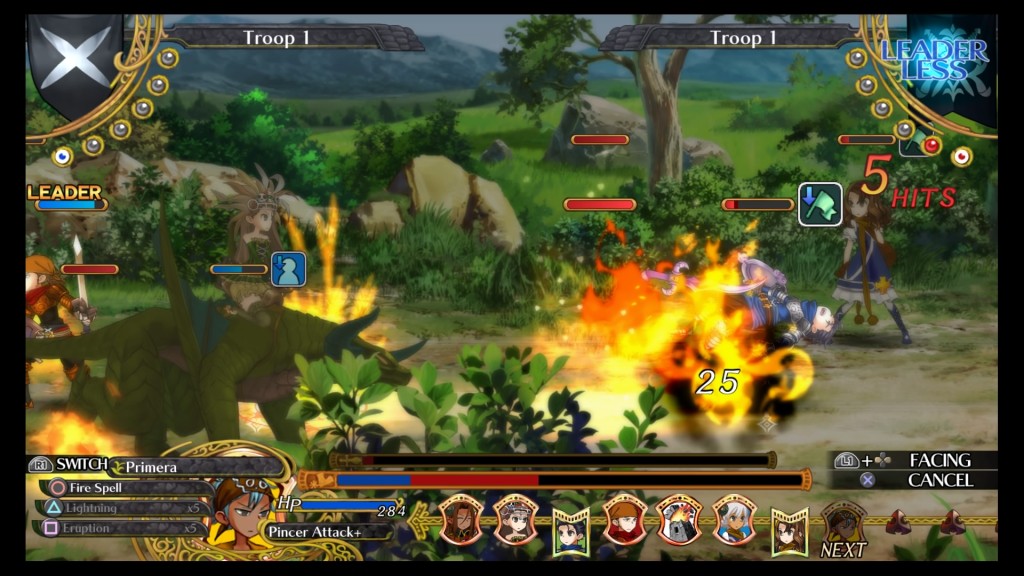 Actually in battle the field is viewed from the side but takes place over three separate lanes. You can switch lanes as you move you characters about but must keep track of their movements as every move drains a bar. If you make a wrong move you can reset it by pressing the touch pad, which is nice, but your movement is limited. Once in position you can attack with basic attacks or special moves which are limited in uses. After that unit’s turn the next fastest unit attacks (friend or foe) and so on until one side is wiped out. Positioning is important as you can set up traps to bottle neck your opponents or avoid an attack you can see coming by being in a different lane. The make up of your team will dictate how you play and I’m sure there is far more depth than I’ve seen even with my substantial time with the game.

That actually makes up the single player portion of the game, gameplay-wise. Outside of battle you can shop for items, craft items, hire more units and train units but as far as the basic gameplay loop goes that’s it. Other than following the main missions there are side missions which will align you with one of four countries which can net you some nice rewards and actually mix up the gameplay sometimes in that rather than simply getting from one side of the map to the other you can be defending areas from oncoming enemies or trying to avoid encounters. There is also a mode which just lets you explore maps collecting materials and taking down bounties if you want to develop your army more by upgrading equipment or just earning experience.

As I mentioned earlier there is a multiplayer portion to this game. Not one on one strictly but those four countries from the single player game are fighting out for control of the map and you have to align yourself with one to fight for their cause. You aren’t locked in once you choose as you only sign up for a certain number of wars (you’re a mercenary remember) but whichever you choose you will be working with other members of that army to try and defend land or take it by force. You move around a map similarly to the single player but each map is covered in forts that you must defend or take in order to earn points for your side. Whoever earns the most points wins the battle and the next fight begins. Each fight takes place over a specific space of time so battles are on going all the time, with or without you. The rewards are generally better than what you’ll get playing solo and the more wars you sign up for the greater the reward also.

If you’re not at your PS4 or want to play some of the single player you can send groups that you’re not using to fight on your behalf where they’ll gain experience and money for you. You can even define what their opening moves will be if you have a sound strategy. It’s an interesting system which, again, isn’t explained all that well but will ultimately end up being the meat of this game. 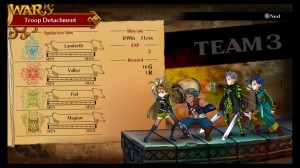 If you really get into developing a squad and trying to conquer the world with the country of your choice then I can see Grand Kingdom being one hell of a time sink. The variety of units, the depth of the combat and the desire to continually strengthen what you’ve got will draw people in, much like Disgaea does. For me, the gameplay is a bit repetitive, the individual elements could do with being explained better and I know for a fact that the online stuff will only appeal to some. If you think that might be you then Grand Kingdom is surely worth a go.