We get to review quite a lot of shoot ’em ups here as the genre is still popular with indie developers on the PS4 but for it’s history alone Fast Striker stands out from the rest.

Sure, on the face of it this is just another vertically-scrolling shoot ’em up but Fast Striker has been around for a while in one form or another. It comes to us by way of NG:DEV.TEAM, an independent German developer who started off in 2001 making games for the otherwise commercially dead Neo Geo. They tend to specialise in shoot ’em ups and the put out a few games for the system and then started porting them to the also dead Dreamcast in 2010.

Fast Striker was one of those games, getting a physical release on both formats back in 2010 and now it’s landed on the PS4 and Vita as a cross-buy title some eight years later. 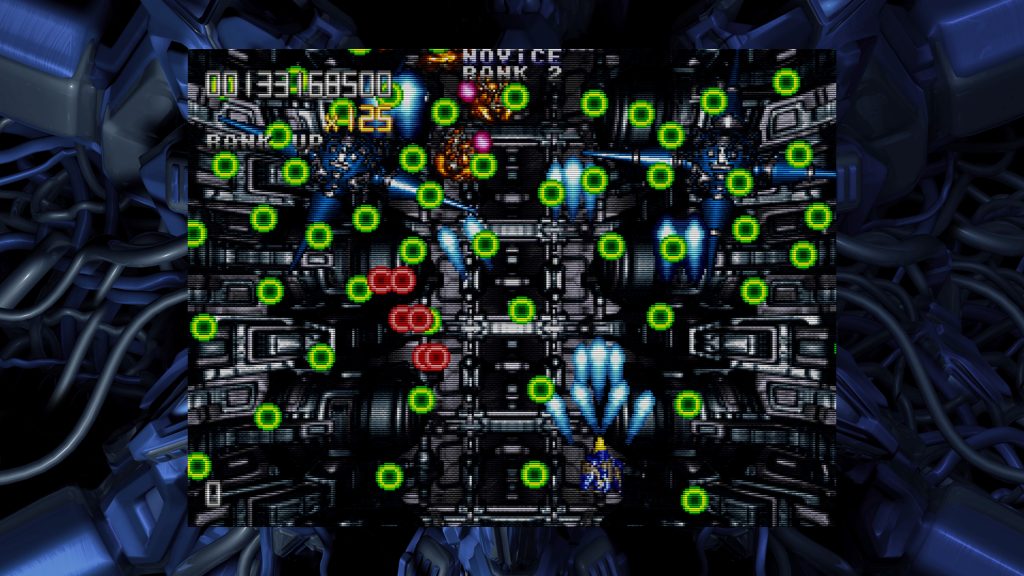 The game is presented as if it was an arcade game and views the action from above as you fly ever upwards through the forces of the enemy. No story is offered and a brief, but not entirely useful, tutorial begins the game.  You get to choose from four levels of difficulty. The original Fast Striker had three with the fourth being added later on for version 1.5, so presumably this version is the fully featured one. What’s interesting is that the scoring mechanics change slightly for each difficulty.

Novice mode just sees you shooting enemies and collecting the gold they drop for points, Original mode offers more gold if you use a specific weapon, Maniac mode challenges you to get closer to enemies for more points and Omake mode is just a harder version of Maniac. 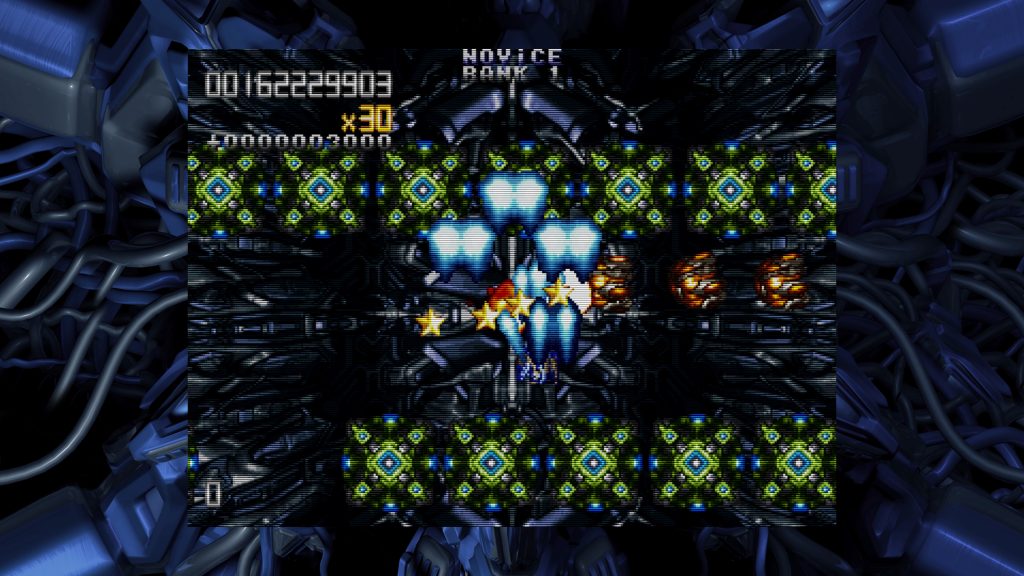 The action itself is fairly typical of the genre. You work your way through lots of small enemies before facing off against the boss of each of the game’s six stages. You’ll be facing plenty of resistance with lots of enemies, some environmental obstacles and, of course, a whole slew of bullets.

To aid you, you have a simple but powerful arsenal. The game uses three buttons.

fires your main gun. In true Cave (Dodonpachi, Guwange etc) style, this behaves differently depending on how your press it. If you tap it you’ll fire normally but holding it down will give you a different, more powerful, attack at the cost of some movement speed. The variations change depending on the difficulty you choose.

fires off a reverse attack, shooting downwards. This is rarely useful in regular play but is required more often during some of the boss battles. Finally, pressing 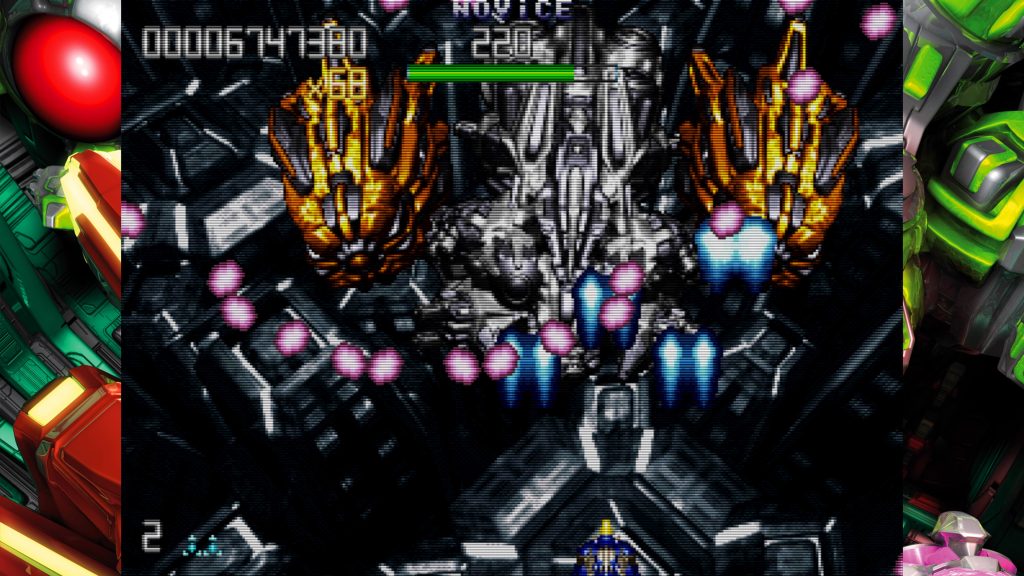 Your weapons set up is a little underwhelming to be honest. There are no power-ups, no new weapons to unlock and you don’t even get a choice of weapons/ships at the start. A good arsenal can make or break a shoot ’em up for me but really you’re just limited to normal or spread firing here and it gets a little tired.  That’s not the only thing that dulls the excitement here either.  Fast Striker is an odd name for the game because there’s nothing particularly fast about it. The game reminds me a little bit of Mars Matrix in that things on the screen are kind of bulky.

Also the game’s graphics are extremely ordinary.  Sure, they are taken from a game that was built for the Neo Geo but they are quite poorly defined and very repetitive.  Each level looks like the last and the backdrops on each of them repeat over and over.  It all has a dark, generic ‘space shooter’ look to it and I had to experiment in the display menu to see if the scanlines were on by default when they actually weren’t.

The soundtrack is relatively bombastic though and combined with the sheer amount of firepower you are putting out, the game can still have its  moments.  Having each difficulty setting play slightly differently is also an interesting feature that we like although the game is challenging enough that you’ll be more concerned with survival than scoring.  At least until you’ve put in some serious practise. 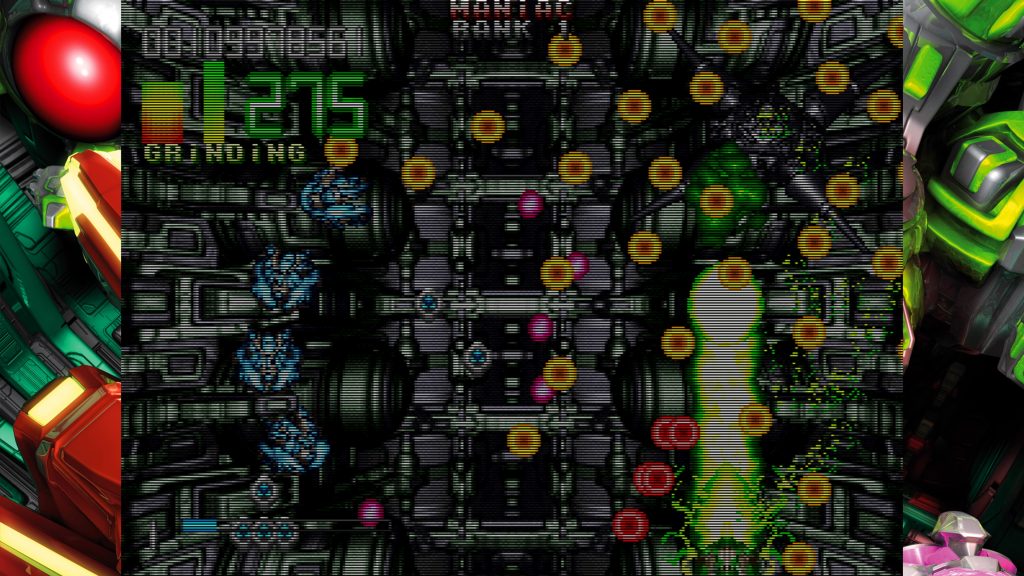 In the end what you get here is a shoot ’em up that was okay eight years ago and one where perhaps the challenge and scoring mechanics may appeal to genre fanatics but in 2018 on a PS4 it’s a little underwhelming both visually and gameplay-wise.  It fares a bit better on the Vita though and feels relatively well-suited to the pick up and play nature of handheld gaming.  The tiny OLED screen also does the game’s visuals a favour.

However, the game does sometimes feel like it is phoning it in especially as there are no extra modes, not even a score attack or boss rush mode, both of which are mainstays in the genre.  So, Fast Striker isn’t about to set PSN on fire but if you can get past the mediocre presentation you do get a reasonably authentic arcade shoot ’em up experience and a sizeable challenge, even if the overall game is pretty short.

Fast Striker
6 Overall
Pros
+ Challenging
+ Different scoring and weapons set ups for each difficulty setting
+ Cross-buy
Cons
- Only six stages
- Visually bland and repetitive
- No power-ups
- Lacking in gameplay modes
Summary
Fast Striker is a reasonably credible arcade-style shoot 'em up that should have some appeal to fans of the genre but this is a port of an old indie game and as such probably won't turn too many heads or attract new fans to this style of game.