The Dynasty Warriors series has been around for twenty years and I’ve mainly avoided it. I’ve dabbled with some spin-offs and handheld versions but what I have been reliably informed was a repetitive and shallow hack and slash wasn’t for me. It had its fans but even they would admit that the gameplay rarely changed. Until now. Dynasty Warriors 9 looks to shake up the formula, hopefully finding a larger audience and improving aspects of the series that have remained the same for over a decade. 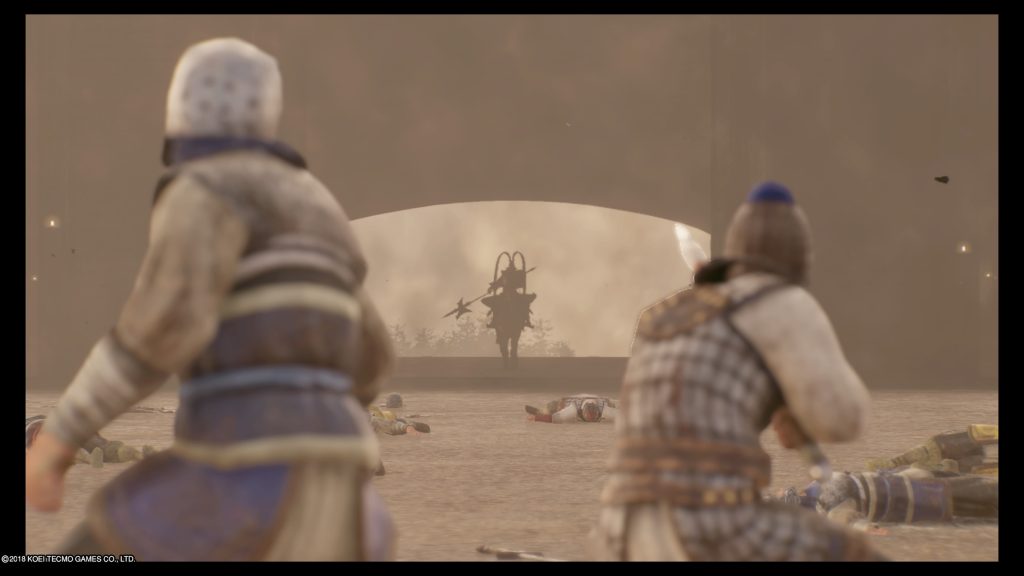 As usual the story follows three Chinese kingdoms as they try to unify China. Fans of the series will recognise the characters, story beats and major battles. You can view the story from five different perspectives (Wei, Wu, Shu, Jin and ‘Other’) with characters entering and leaving as the story dictates. Once unlocked you can play as any character with everything but character level coming across which is very welcome.

Once you’ve chosen your character you’re thrown into an open world for the first time in the series. There are towers to climb to discover landmarks, resources to collect, animals to hunt, your map even has a GPS to point you to where your next mission is. Open world games are popular and when you consider the strategy side of games like Romance of the Three Kingdoms then having a large map active at all times with armies marching and battling irrespective to what you’re doing makes sense.

What are you doing? Well there is one major quest to complete, usually a large battle against an important enemy general. Each mission has a number assigned to it to suggest how high a character level you should be to attempt it, though you can ignore that if you wish. If you choose to run straight to said battle then you’re going to encounter more enemies, your allies are either going to be completely absent or less useful and things will just be that little more difficult. What you can do instead is take on smaller missions littered around the map that will lower the difficulty for the main mission. Defeating a general guarding a warehouse full of supplies will lower enemy morale, defeating a general stationed nearby will stop them from providing reinforcements, etc.

Apart from the odd mission which will just involve talking to people most missions will have hundreds of soldiers between you and your target. Whether you choose to wipe these out or not is up to you as they pose no threat and will simply disperse once their leader is defeated, but there’s no doubt that swiping away tens of enemies with one attack is still as satisfying as it is in any other Dynasty Warriors title. 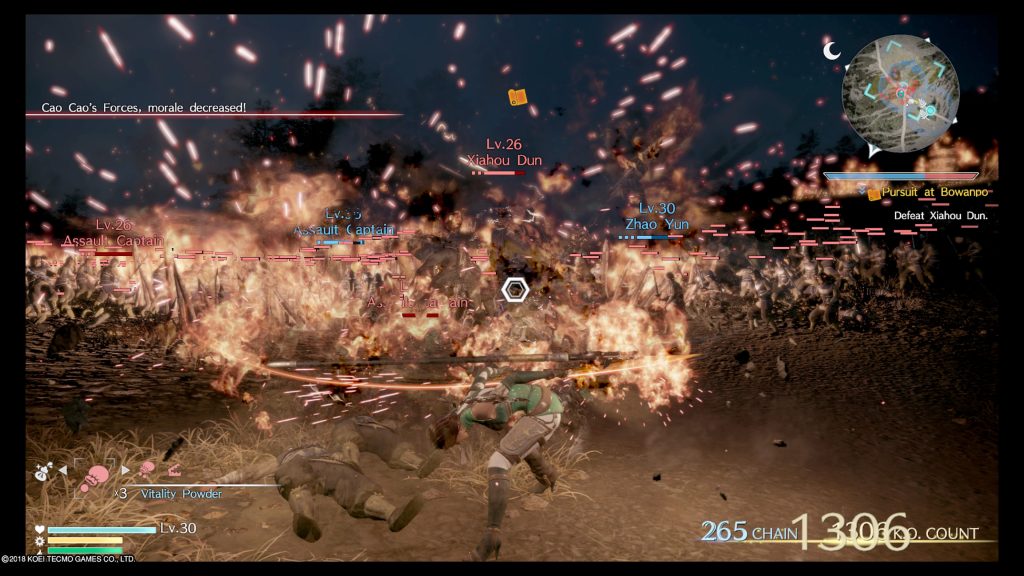 The battle system is different this time around, rather than building combos with a combination of light and heavy attacks you have Trigger Attacks that will perform a launcher, stun or ground attack. From here you can keep attacking with Flow Attacks for different results. You also have Reactive Attacks which are basically QTEs. The triangle button will appear above an enemy’s head if they’re weak allowing you to finish them off, if they’re about to attack and can be countered or if they’re unaware of your presence and can be caught off guard. Then of course you have your Musou Attack, a character specific special attack that is powered by a gauge that fills as you defeat enemies.

The basic combat is quite fun if a little repetitive. You’ll rely on the same attacks throughout and even when you change characters although the animations are different they each have the same setup meaning that they all play the same. Boss characters can sometimes be a little challenging if they’re a high enough level but if they’re not then they die insanely quickly and the difficulty is implemented by just letting them ignore your attacks and hit you mid-combo rather than anything requiring strategy to best. Playing through on Normal I have had little trouble and as I’ve been doing the majority of the side missions for materials, experience and items I’m also massively over levelled.

Still, you can always change to another character if you’re feeling too strong and this doesn’t sound too different to other Dynasty Warriors games so far. What of the open world? The obvious difference is you have to ride your horse to wherever it is you’re going. Once you’ve discovered an area you can fast travel but if you are following the roads or going off track then you’ll find enemy checkpoints, materials for crafting, wild animals and landmarks. Unfortunately these quickly become inconsequential. The hunting equates to you crouching a distance away from some wolves, deer, tigers or bears with your bow and arrow out and tapping square constantly. They won’t react and will die before too long, leaving you to kill the rest of the pack or they’ll just vanish because you killed the ‘leader’. 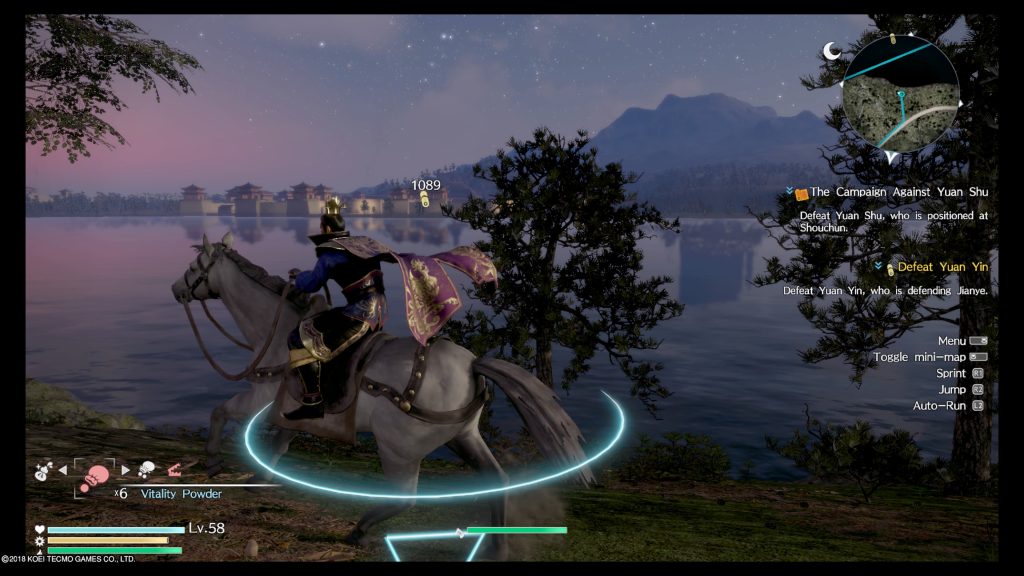 Similarly crafting didn’t make a huge difference. Apart from the charm that made items dropped by enemies automatically magnetise to me I could have done without the slight buffs. There are lots of weapons to craft too though this seems needlessly complicated with characters having favourite weapons but the game not telling you what they are until you actually own them making it a bit of a guessing game. Other bullet points are fishing which just involves waiting for a splash before pressing a button and a grappling hook that allows you to climb vertical surfaces. Like the hunting they just feel gimmicky unfortunately, not creating much of a distraction or enhancing an otherwise quite dull world.

The land is pretty flat in general, with copy and past forts and little colour beyond brown and even that’s washed out. The visuals all round are underwhelming which makes the amount of slowdown surprising, especially as there is a black border around the screen constantly. On a Pro you have an option as to whether you want to prioritise frame rate or picture quality but you get massive frame rate drops in both modes. Enemies pop in and out of existence, I’ve had graphical glitches with misshapen pixels, as well as just a low budget feel.

There are two types of cutscenes. Fully animated ones with multiple camera angles and character acting and ones where two or three characters just stand there talking to one another. They all go on a little too long and whichever type it is the English voice acting is terrible, some of the worst I’ve heard in a long, long time. Luckily you can set the voices to Japanese or even Chinese for that extra realism, though you’ll then need to be a little more vigilant as to the instructions and battle updates you’re receiving.

I’ve had problems with the checkpoint system too. Playing the Wei storyline on Chapter 4 I started tackling the side quests as I had been doing up to this point and then the main mission failed with a character dying. I hadn’t initiated the main mission and the game hadn’t given me any indication that it had started or was in danger of failing. If you didn’t have time to do the side missions why do they exist? Worse still was as I started a side mission the game had checkpointed and when I failed the checkpoint would reload and the mission had basically already failed at this point. The only fix was to restart the entire chapter and it forced my completist hand a little into thinking that maybe I should just ignore the side stuff which was taking a lot of time when I can just jump to the big battle. 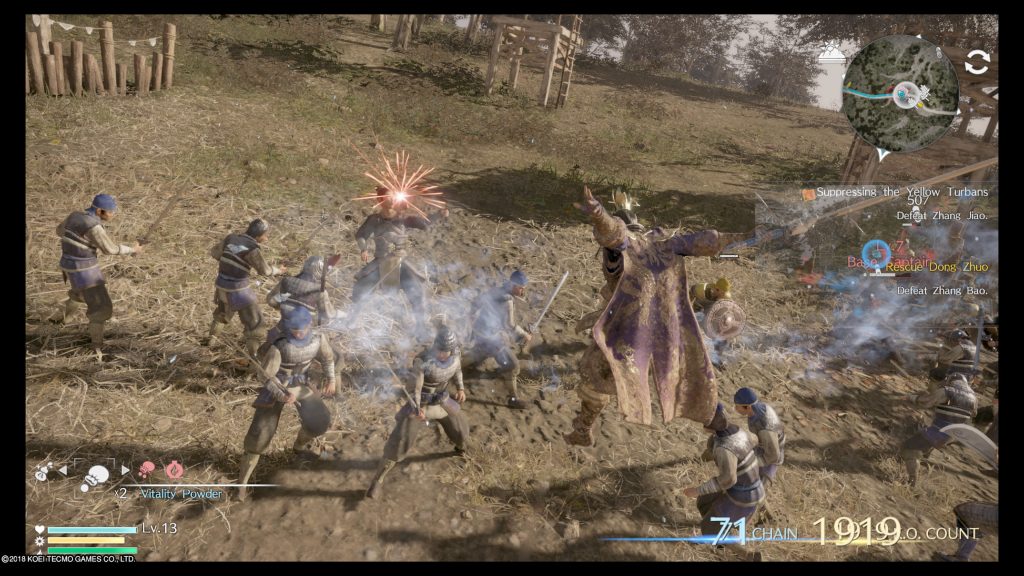 So this isn’t the new dawn that Dynasty Warriors 9 was hoping for. I can’t say I’ve hated my time with it, yes it has a lot of problems but I still find the act of swatting aside hundreds of soldiers to be satisfying and the ease with which I could play the game and watch the numbers get higher does provide some enjoyment. The open world, as it’s been implemented, is a mistake however, adding little and taking away much. Combined with the low budget feel makes this a hard one to recommend to new players and fans may be disappointed with the changes made to their beloved franchise. Hopefully, if used as a base to build from, this could eventually lead to a much better game.

Dynasty Warriors 9
6 Overall
Pros
+ Lots of characters to unlock
+ Destroying armies single-handedly is still fun
+ There's some potential
Cons
- Open world is empty and ugly
- Voice acting is so, so bad
- Repetitive action
Summary
Dynasty Warriors 9 moves into an open world and suffers because of it. The world itself is lifeless, the hunting gimmicky and missions design repetitive. Wiping out armies single-handedly is still enjoyable however, with plenty of characters to unlock, it's just a shame the game doesn't do more with its obvious potential.