It all starts off promisingly enough, your trucker ‘Flint’ doing his best Jack Burton in terms of wisecracks and canned dialogue. But you’ll soon realise the same clip plays every time you pick up a specific weapon, a shotgun triggers “My baby” for example. This wears thin very quickly. The weapons themselves are fun with satisfying heft despite the irritating audio cues.

The gameplay itself is fairly serviceable, just as the enemies you’ll mow down in waves are distinctively designed. The cracks start to show early on. You’ll find yourself replaying whole sections due to poorly placed checkpoints. One gauntlet in particular we replayed a few times too many for our liking. 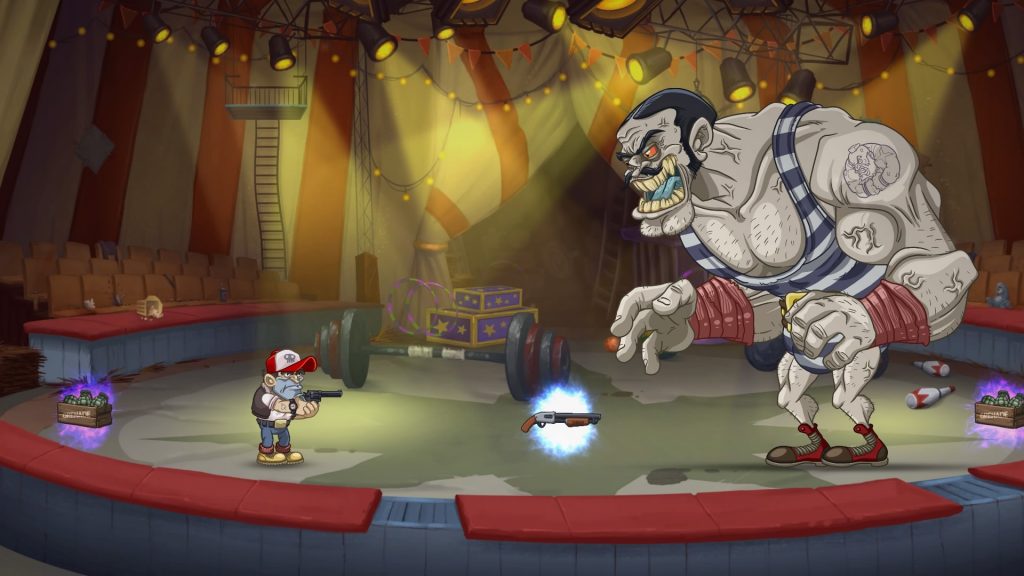 We get that you can have too many checkpoints on a short level, but when you face down a massive group of enemies only to succumb to the equivalent of a light punch it gets outstays its welcome even quicker than a workplace Brexit discussion. Then you have to do it all again. If nothing else it means you’ll reach the trophy for killing five thousand a little quicker than you planned to.

Even on the default difficulty level you’ll frequently find yourself overwhelmed by the sheer number of enemies and succumb to what turns out to be an increasingly frequent death animation. You won’t be 1ccing Creepy Road, though Groovy Milk tacitly acknowledge this by including trophies for multiple player deaths up to three hundred. 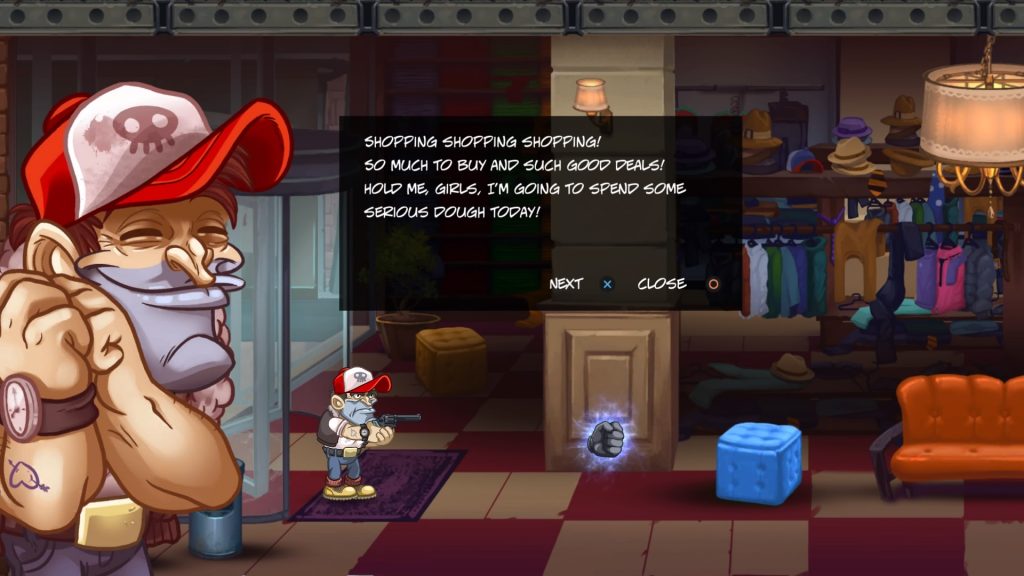 Enemies vary from rabbits all the way up to  bears on unicycles, all of which are well designed, if not animated. Character animation is perfunctory at best, only a few frames of animation separating movement and static images. As you can see from the screenshots that pepper this review, Flint’s idle state is pretty much identical when not moving, regardless of the context.

You’ll come up against four bosses, the first of which is laughably easy to defeat. The second and third bosses on the other hand are big stumbling blocks that sap your will to continue, in both cases causing us to lose the will to play any more for the evening. 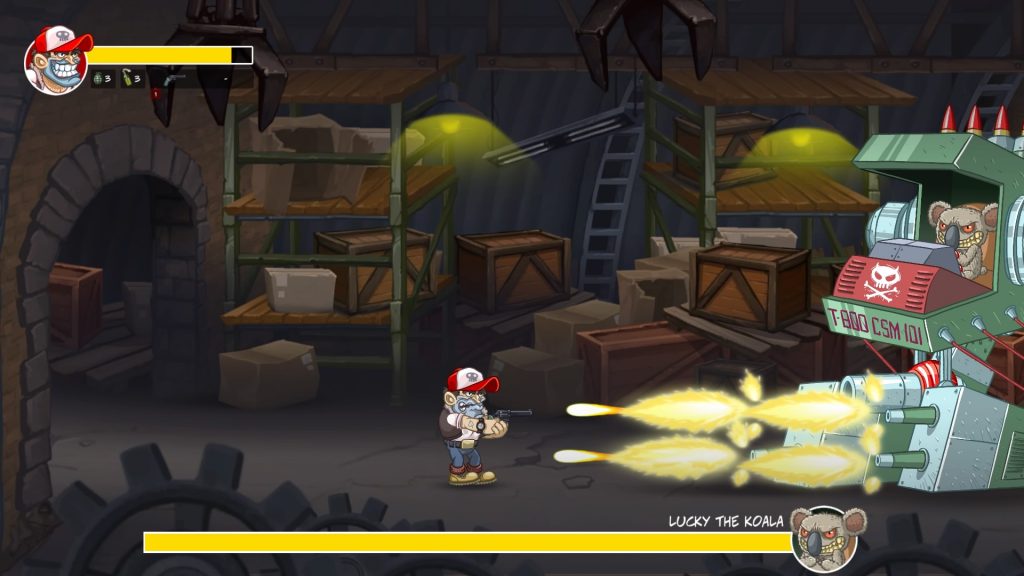 As is often the case with bosses in games of this sort, once you work out the attack patterns and optimal areas to avoid the most damaging attacks you can cheese it and win the day. It feels very attritional, in the case of the final boss you don’t get enough ammunition to beat the endlessly respawning enemies as well as the boss before you’re once again overwhelmed.

By this point we just wanted it to be over quickly, but once again we called it an evening. We’d effectively admitted defeat and bumped the difficulty down to easy but it made no odds to our progression. 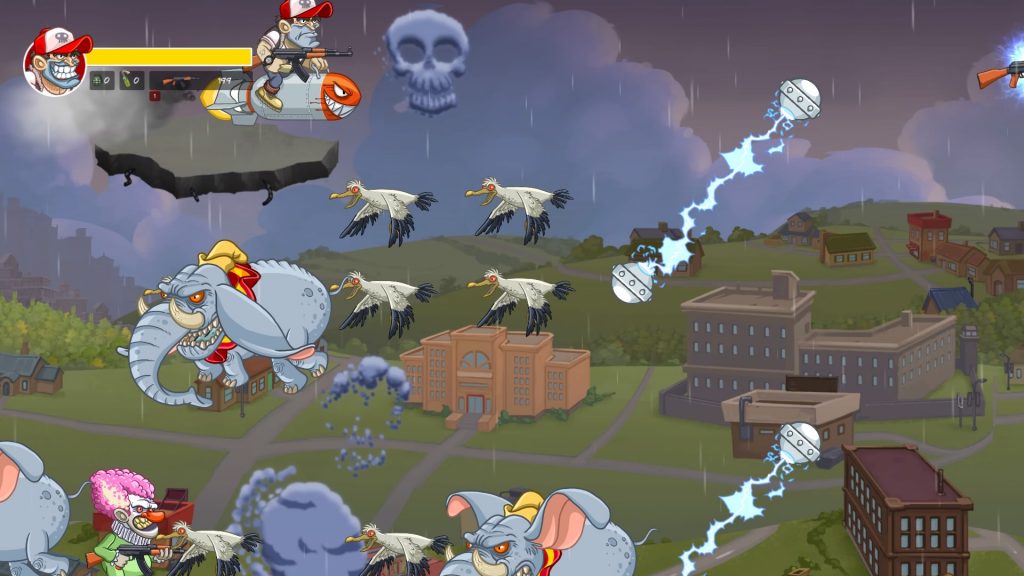 The code for the game isn’t particularly well optimised, especially on a vanilla PS4. We played one mission late one evening and slowdown on a  mission where you ride a missile Slim Pickens style became so bad we couldn’t progress any further. Thankfully coming back to it the following day we progressed, but it smacks of bad memory management when assets overwhelm the console to such an extent the only solution is to power cycle. Not great.

We mentioned the same samples being used over and over early in our review, it got so bad during one repeated boss attempt we muted the sound and played in blissful silence, Newsnight being preferable to the ingame audio. The music is OK, it just overwhelmed by the same old samples again and again. And again. To the point my wife could bear it no more and has grown to hate Creepy Road without even having played it. 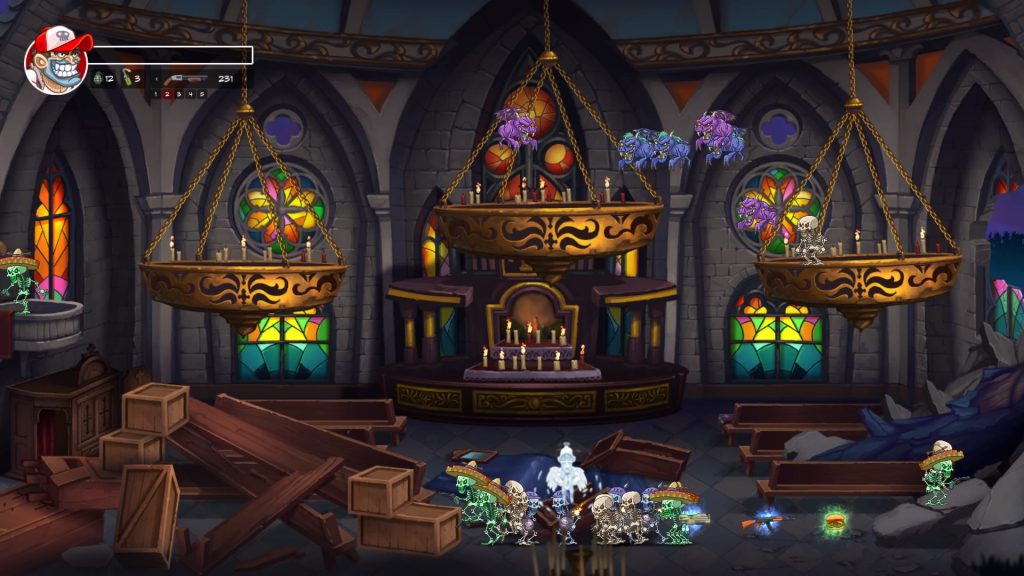 Creepy Road  is a run and gun by numbers that should be worth playing, but being hamstrung by technical issues and shoddy design, it veers between humdrum and average at best. It’s a rinse from a trophy point of view, but to be honest you’ll do well to see it through on PS4 let alone doing it all again via Vita crossbuy.

Creepy Road
4 Overall
Pros
+ Character and enemy design is distinctive and bright
+ Solid enough gameplay
+ Some amusing weapons
+ One for trophy whores
Cons
- Checkpoints are too widely spaced
- Canned dialogue samples soon become repetitive
- Character animation is poor
- Some boss fights are too easy, others are too difficult, regardless of your difficulty level
- Massive slowdown in some areas make gameplay and progression impossible

Summary
From Russia with bugs. A below average run & gun platformer you'll tire of quicker than a cold weather front.