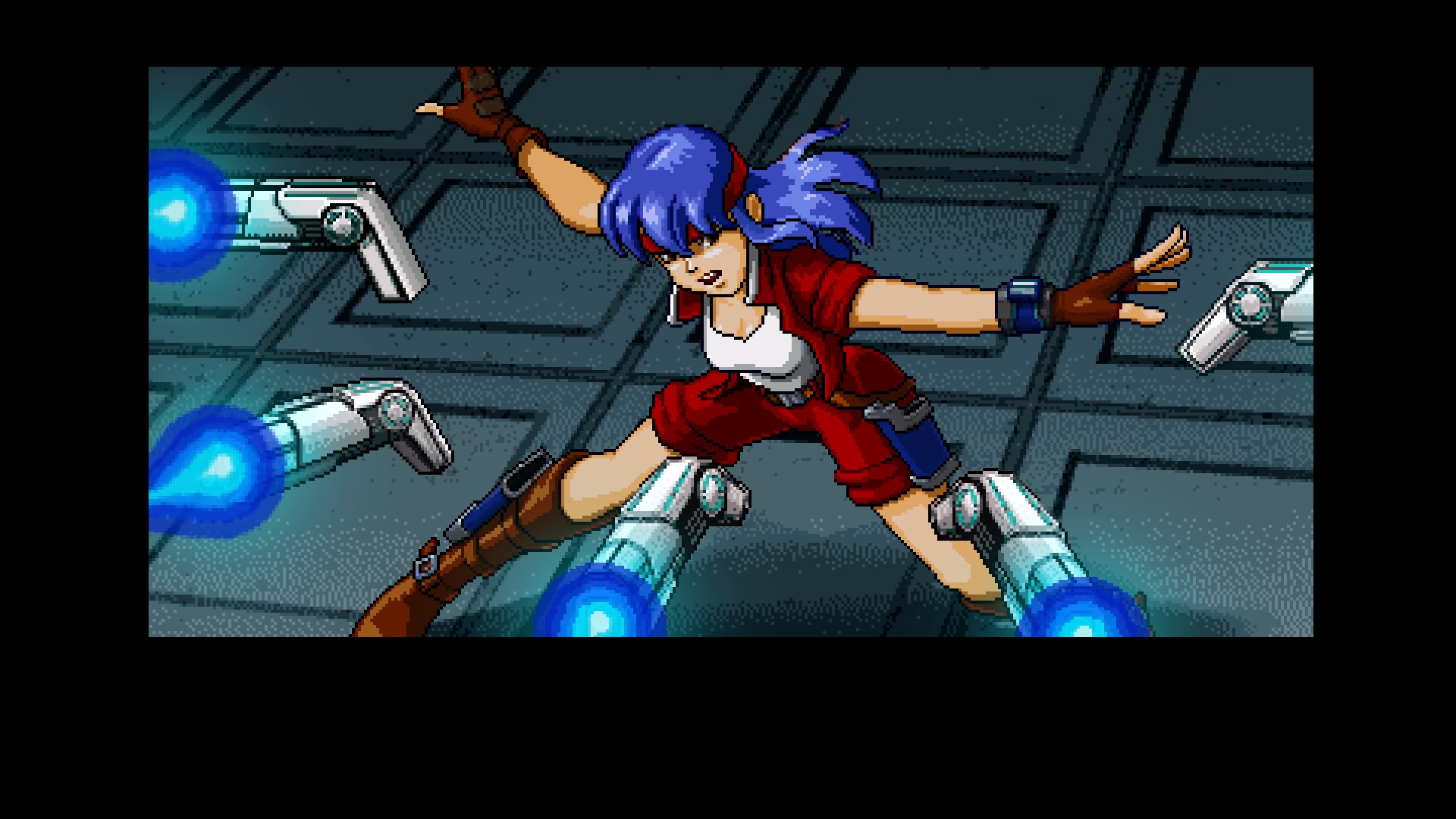 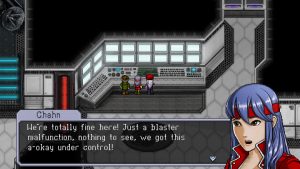 Zeboyd Games has gathered a decent following thanks to Cthulhu Saves the World and Breath of Death VII, retro JRPG inspired games. Cosmic Star Heroine was Kickstarted just under four years ago and has now arrived on the PS4.

As with the other titles mentioned this too is inspired by JRPGs from a bygone era. More specifically if you think of Chrono Trigger with a splash of sci-fi from Phantasy Star then you’ll get a pretty good picture. The aesthetic is nailed perfectly. From the visuals to the audio, if you’re a fan of older JRPGs then you won’t help but have a smile on your face as you play. The audio is actually higher quality, technically speaking, than was possible back in the day but it gets the feel of it exactly right.

You play as Alyssa, a special agent for the API (Agency for Peace and Intelligence). On a mission she discovers a device which allows the user to control other’s minds and upon returning to base realises that maybe the agency isn’t one of the good guys. She then goes rogue with a few squad mates to save the day.

Honestly the story isn’t the strongest element of Cosmic Star Heroine but then it rarely dwells on it too long. The characters are fine and so is the story, but the game moves at a very swift pace so you’re quickly onto the next dungeon or set piece. The whole game runs at around fifteen hours so is relatively short for this type of game so you’ll be jumping from area to area, chapter to chapter very quickly. 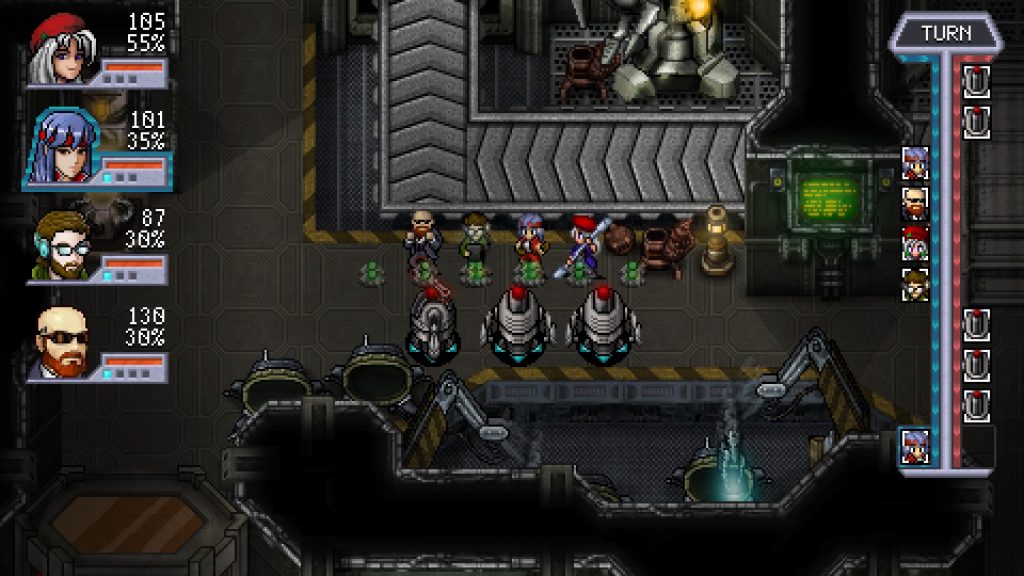 Progress is generally linear, with just the odd branching path leading to some optional treasure. As you progress there will be some optional dungeons and powerful bosses but these tend to be very brief, you will struggle to get bored as you’re constantly moving forward.

There are no random encounters, enemies will wander the area and if you bump into them then it’ll initiate a battle. Once beaten they’re beaten for good, they won’t respawn even if you leave and re-enter an area. If you want to grind (I never had to) then you can open up your menu and initiate a VR Battle which you can attempt over and over if you so desire.

Battles themselves are very interesting. You can sit on the menu as long as you like as each character takes it in turn to attack. You can take up to eight moves per character into a battle, from a basic attack, to buffs or debuffs. Generally, unless it states otherwise, each move can only be used once at which point it becomes inaccessible. At any time you can rest, which will take up a turn but will return all your used moves to you. This combined with the hyper system, where after a certain amount of moves your next action will be more powerful and the buff system where you can power up allies for a set number of turns makes juggling your party to maximise damage crucial.

There is also a Style system where the more variety in your moves the higher a character’s style gets which increases their damage output. As a battle goes on the enemies style also increase so the longer a battle takes the more difficult it is to avoid major damage. 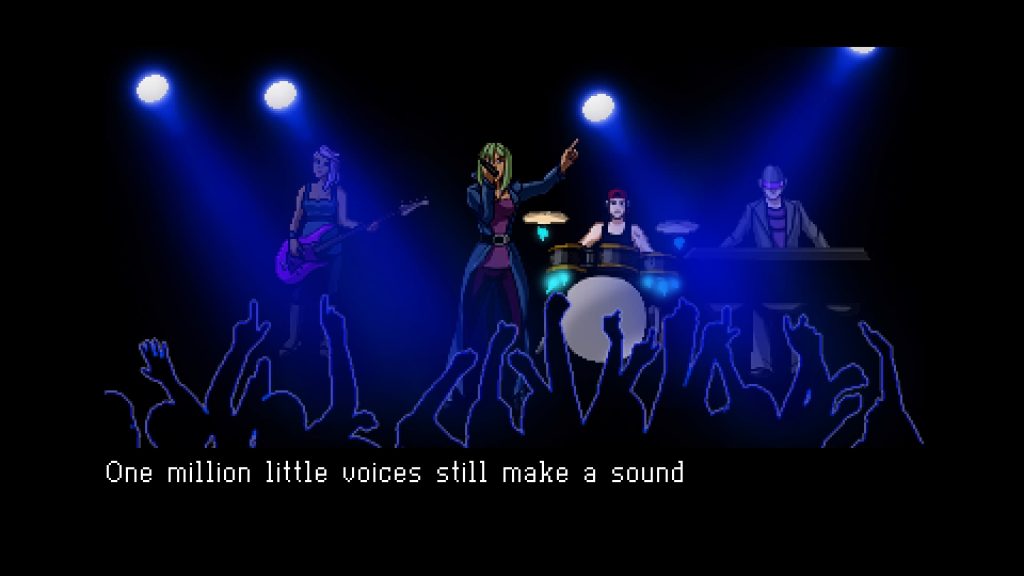 There are multiple difficulty settings so you can adjust the game to your tastes. I played on the second hardest difficulty and didn’t find it too difficult, only dying a few times. There is a trophy for beating the very first encounter on the hardest difficulty and that is no joke, so if you really want a challenge then you do have an option. You can save anytime you’re not in battle, but even if you die in a battle you get two options, to go back to the title screen or retry. Retrying restarts the fight as if nothing happened which is very generous and welcome.

Being sci-fi you have multiple planets to traverse to which are your overworlds. They aren’t the biggest areas but there’s enough variety visually in each planet to keep things interesting. There are towns and dungeons to explore, some mandatory, some optional and some basic side quest style activities to take part in which fleshes out each area nicely.

There are very few negatives as far as I’m concerned when it comes to Cosmic Star Heroine. Some of the menu navigation could be better, like comparing equipment when in a shop or equipping characters who aren’t currently in your party. I would sometimes get caught up on tiny rocks whilst traversing areas which simply shouldn’t have any collision and I did have it freeze once towards the end as my inputs wouldn’t register. Minor annoyances at best. 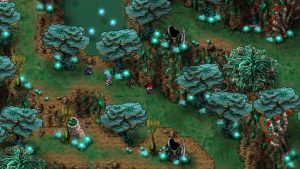 If you aren’t interested in retro JRPGs then I doubt this will have anything for you either but if you are then I struggle to imagine anything better. Yes it is quite short for this type of game but then the price reflects that. If you want something a little more sprawling then maybe you’ll be disappointed, but if you go in knowing what to expect then I think you’ll come away very satisfied. Cosmic Star Heroine is a great game that succeeds in its goal of providing an old school JRPG experience on pretty much every level.

Cosmic Star Heroine
9 Overall
Pros
+ Perfectly recreates that old JRPG look and feel + Moves quickly, you're never in one place too long + Generous retry system + Interesting battles
Cons
- Maybe a bit shorter than you'd expect - Some minor UI issues
Summary
Cosmic Star Heroine is a great game that succeeds in its goal of providing an old school JRPG experience on pretty much every level. The battle system is an interesting and enjoyable one and the ability to save anywhere and retry instantly from deaths is very welcome. I can't recommend it enough.