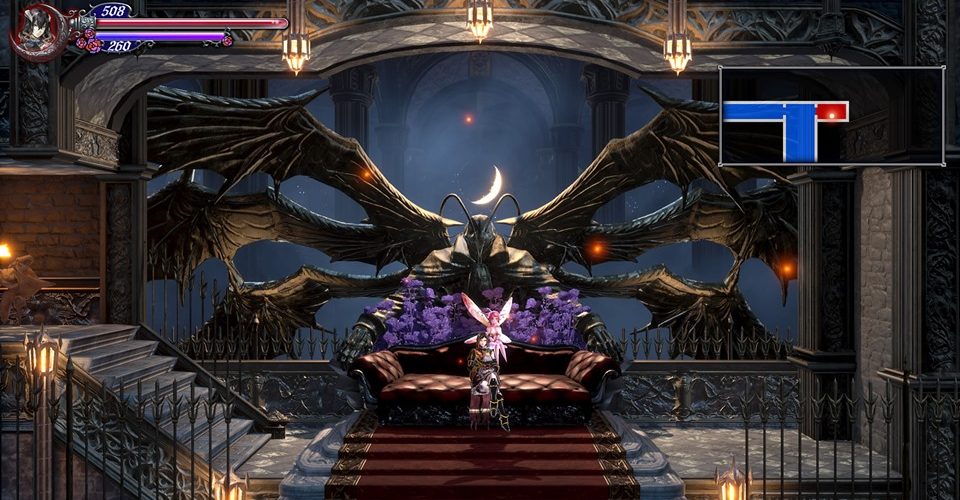 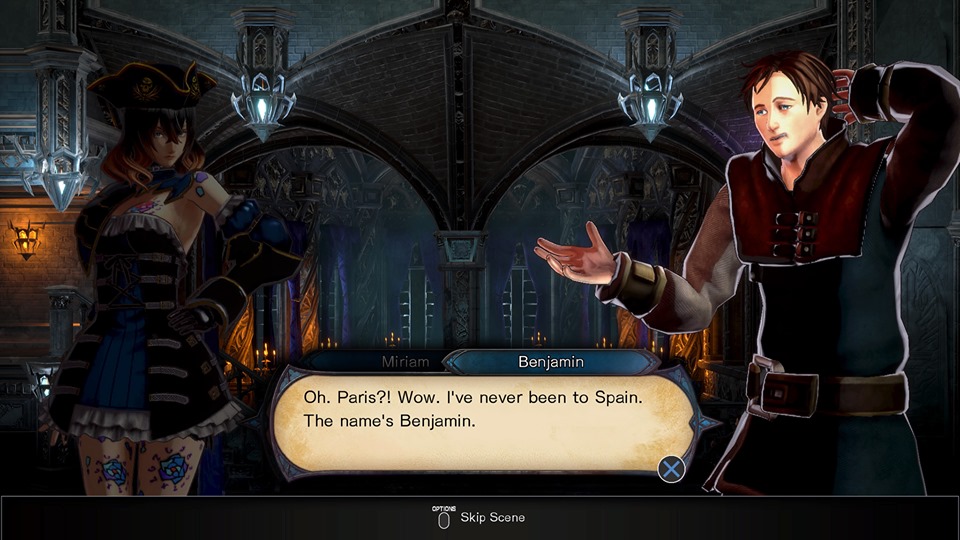 In the realm of Kickstarter, it can often be hard to ascertain as to whether anything good has come from the service. It seems that every month there is talk of a game that originated on the crowd funding platform that is either being delayed into oblivion, being canned outright or just being like Mighty No.9. Even when some do succeed in being good, they may only be to the point where the backers are sated in some degree, that doesn’t mean that they are excellent experiences overall. If based on what I have just said you are wondering where Bloodstained lies, then read on, it is neither of these.

Bloodstained: Ritual of the Night sits in the third category. This being the upper echelon of indie titles that have delivered on the promise of their campaign, not only proving to be a good game as a result but one that wholly justifies the urgency and desire of its backers. Without a doubt, it stands as one of the finest examples of the genre and one that lives up to the core premise with plenty of fan service strewn about the place as well. 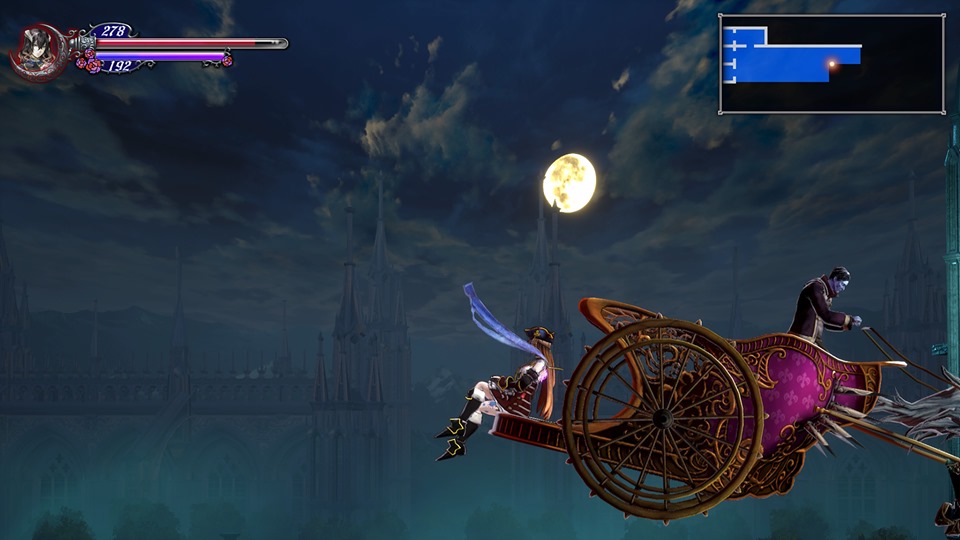 Let’s get one thing out of the way, it’s clear that this is a Castlevania game in all but title. The creative director for Bloodstained is the immensely lovable Koji Igarashi, godfather and co-creator of the emergent Metroid-Vania genre. As such, he has brought his expertise to the genre that he helped popularise with the likes of Symphony of the Night. Some would call that an automatic win, but with competition out there with the likes of Axiom Verge, Rogue Legacy and others, Bloodstained had to be special in some way.

So, what does it do differently from the others? Well, not a lot actually. The game still follows the same back tracking formula where to reach new areas you must collect a power-up or key from another. The game does throw curveballs however, namely in the abilities of the main protagonist. Miriam is a Shardbinder, a powerful human that can utilise demonic abilities from fallen foes. These abilities range from simple stat boosts for things like strength or magic, familiars that follow Miriam around with their own powers and powerful floor clearing magical blasts that can easily turn the tide in the more difficult encounters. Shardbinding is a sort of pseudo Pokemon mechanic, most of these will be collected by chance, while others are collected off bosses to allow passage through previously blocked off areas. These range from useful giant hands that grab heavy obstacles and a lazer style teleportation attack that can make Miriam zip through small spaces. 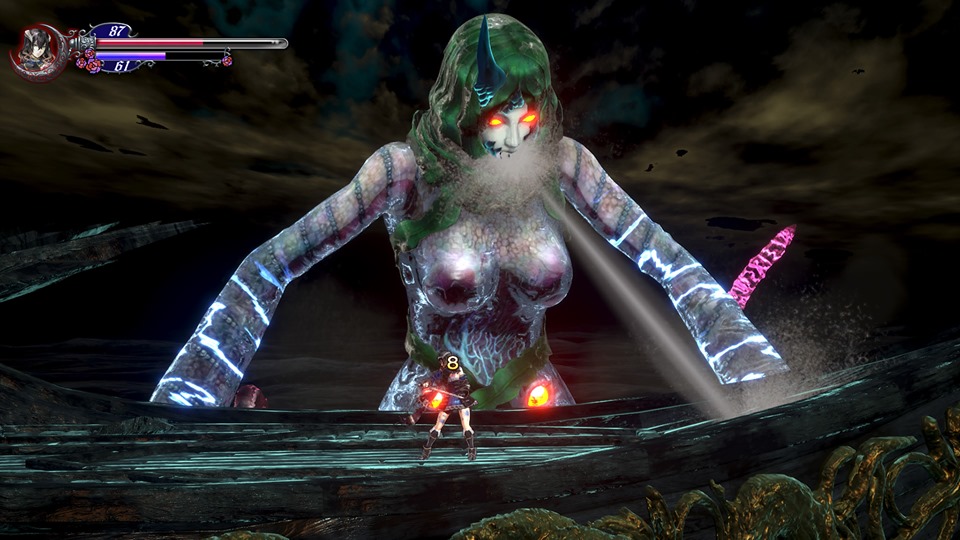 Shardbinding is what makes Bloodstained: Ritual of the Night unique and it is a fantastic mechanic. One of the joys of the first playthrough is discovering what each shard can offer in terms of function and the strengths of which in each area of the castle that you find yourself wondering through. It encourages experimentation and consideration as to how best to build Miriam as a character.

You are not solely reliant on demon shards and Miriam is still entirely capable as a melee fighter. Throughout the adventure can be found chests that contain either armour or a myriad of weaponry in the form of your usual swords, staves, whips etc. Each of which having different attributes, for example, a rapier doesn’t have much in the way of normal swing damage, but it does allow for a quicker succession of hits at any given time. You can entirely forgo the shardbinding side of the combat if you like and instead work to deck out your weapon of choice, which is handy if you are the type of player who prefers more traditional Castlevania experiences that focussed mainly on swinging weapons around and using magic as supplemental damage. 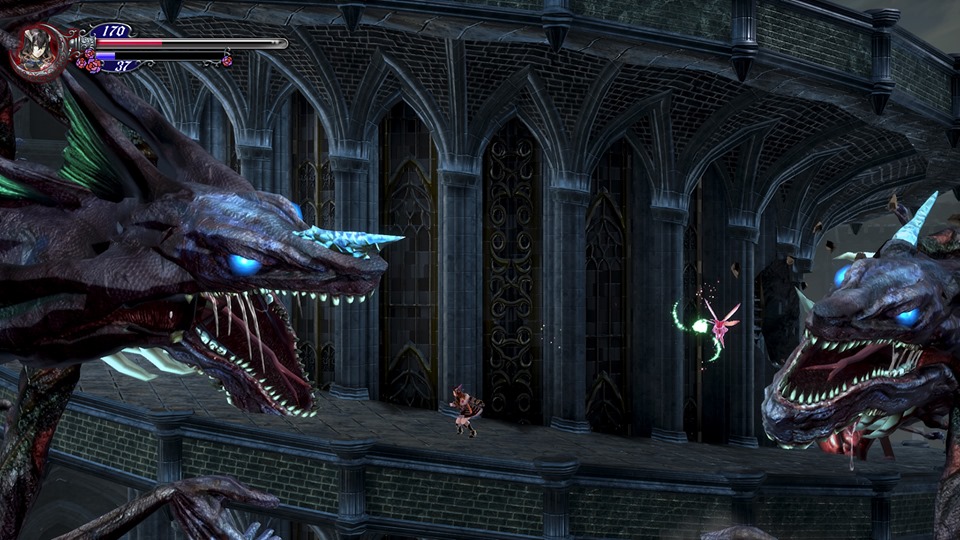 In terms of story, Bloodstained features the usual baffling affair. It’s the early 19th century when a giant demonic castle appears, spewing out unnatural horrors upon the world. With the help of the local church and guild of alchemists, it’s up to you to chase the villainous Gebel as he intends to wage war on humanity with his castle full of demons. It seems like this is the typical Castlevania Dracula against the world affair, but I will say without spoiling that there are twists along the way and just a few alternate endings in the mix also. A fact I found out myself with just pure discovery as I inadvertently ended the game after finding one after a few hours of gameplay, with plenty more to discover and an ending that I am sure Symphony of the Night fans will appreciate, there is plenty to find here in the narrative. Hell, even if you prefer to skip the anime style dialogue and cutscenes there is plenty to find as Bloodstained features one of the largest castle maps ever conceived for a Metroidvania game.

For me, one of the most important aspects of a Castlevania title is in the music and general theme. The spooky, universal horror themes of the previous titles are always the thing that keeps me coming back. Particularly with the likes of SOTN as the early CD soundtrack was filled with organ drawls and complex faux-classical music that is nothing short of pleasing to the ear. I’m immensely happy that Bloodstained: Ritual of the Night is no slouch in this side either. The soundtrack is tremendously good, harking back to the classic CD era games from the past while also giving each area its own personality. It makes this one of the few games where I would purposefully plod back to earlier areas just to hear it. 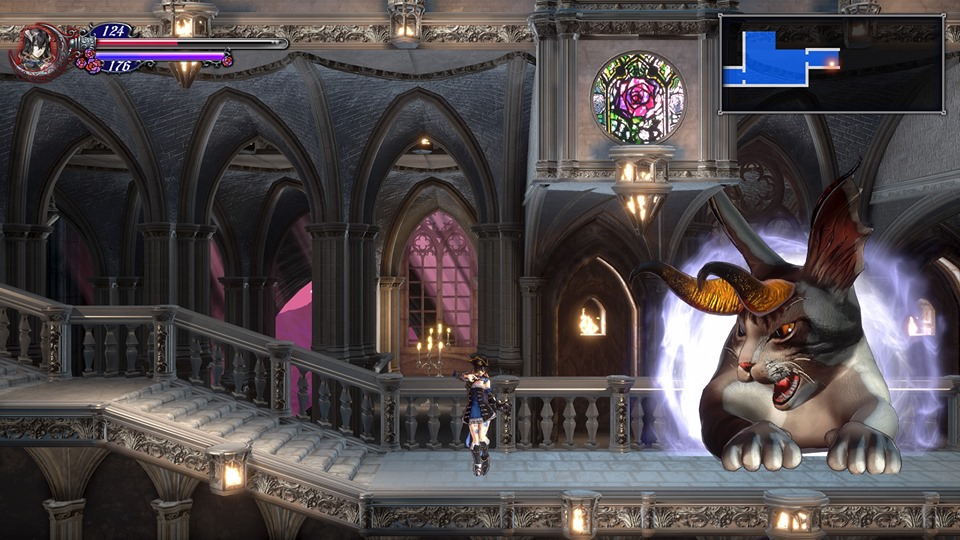 Flanking the awesome phonics is some pleasingly theme graphics work that ties it all together. Bloodstained features a stained-glass aesthetic that permeates throughout, mixing painterly style locales with 2.5D 3D modelling in some cases. However, there are some caveats. Some environments can look a bit pixelated and ugly compared to others and there is a general wash over some textures which can be quite jarring, particularly when the frame rate starts to dip in some of the more intense 3D sections. Overall though, Bloodstained is a feast for the eyes and should not be ignored for the sake of some visual nuances.

Bloodstained: Ritual of the Night may have a couple of issues keeping it from a ten, however it stands as potentially the finest example of the Metroidvania genre. It plays incredibly well, has great audio and one of the most moreish games I have played in recent years. If you are a fan of Castlevania then you should have bought this already, if not then there is still a lot to enjoy here. Bottom line though, if you ever wondered what a great Kickstarter game looks like, then here it is.

Bloodstained: Ritual of the Night
9 Overall
Pros
+ Tight, responsive control
+ Doesn’t abandon modern conveniences for the sake of nostalgic design
+ One of the best soundtracks going
Cons
- Occasional slowdown during some heavy 3D sections
- Some minor graphical nuances that let the side down a bit
Summary
Top drawer Metroidvania action from one of the genre’s key innovators. What’s not to love? From great gameplay, a superb soundtrack to one of the most moreish campaigns available for the genre, Bloodstained: Ritual of the Night is nothing short of a bloody good time.

One thought on “Bloodstained: Ritual of the Night – PS4 Review”