Sometimes a game comes along that is so simple in terms of execution of concept, it hardly needs any further explanation. From small developer Petite Games by way of publisher Ratalaika Games comes Attack of the Toy Tanks. The title alone says it all. You play a solo toy tank against other toy tanks. It’s straightforward in implementation and fairly no-frills with it. That’s no bad thing though.

Typically for a Ratalaika game, the trophies come thick and fast to begin with. In addition, there’s PS Vita crossplay so you get two platinums for less than the price of a cup of coffee (I work in London, it really is that expensive).

There are sixty levels all in, they steadily increase in challenge and enemy frequency. You can tackle them in any order, but we’d recommend you didn’t. That said, if you find yourself struggling on a particular level you can avoid the pothole in question and simply do another level. 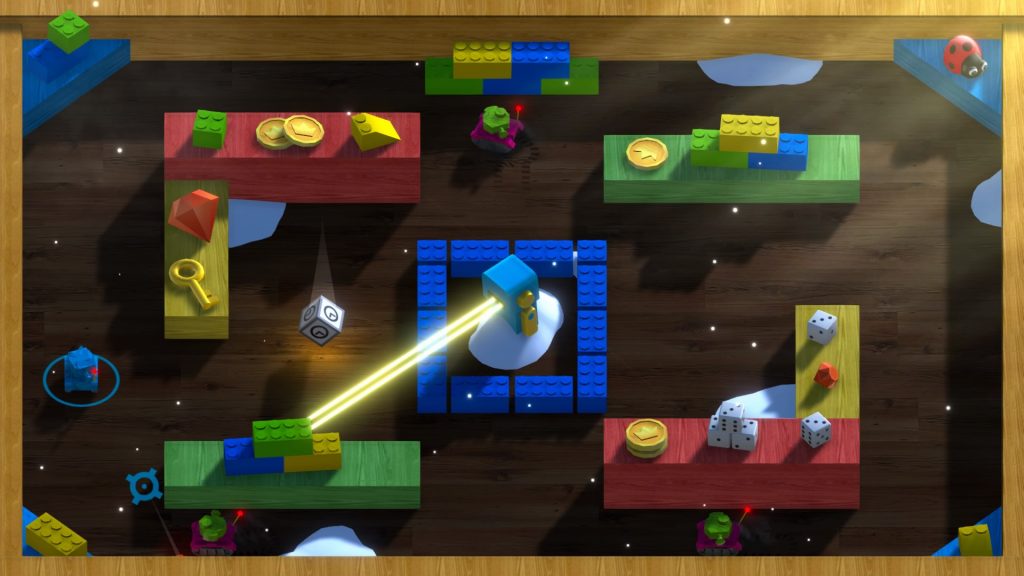 At the outset, we were struck by the spartan looks and what we initially thought was one note gameplay. Yes, there’s not much more to this than shooting enemies before they shoot you, but Attack of the Toy Tanks is fun with it.

In typical Ratalaika fashion, you only have to beat thirty of the sixty levels to secure what is likely to be your final trophy and hence a platinum. But unlike other Rata rinses, you’ll feel compelled to carry on well after the final trophy pops. Upon embarking upon this review, we had done thirty seven of the sixty levels. Admittedly this was on Vita, but again as is typical of Ratalaika games, Toy Tanks lends itself well to playing on the go.

There are three tank types you’ll face off against, in effect tanks with one, two or three barrels, each with a spread of shots you’ll need to avoid. The AI will generally one-shot you if you are in their line of sight, the key strategy being to draw their fire in one direction to delay them getting another shot off. But if you don’t return fire quickly, you’ll find yourself a burning wreck in short order. Restarts are immediate, even on Vita. A few occasions the game froze on restart but never for very long. 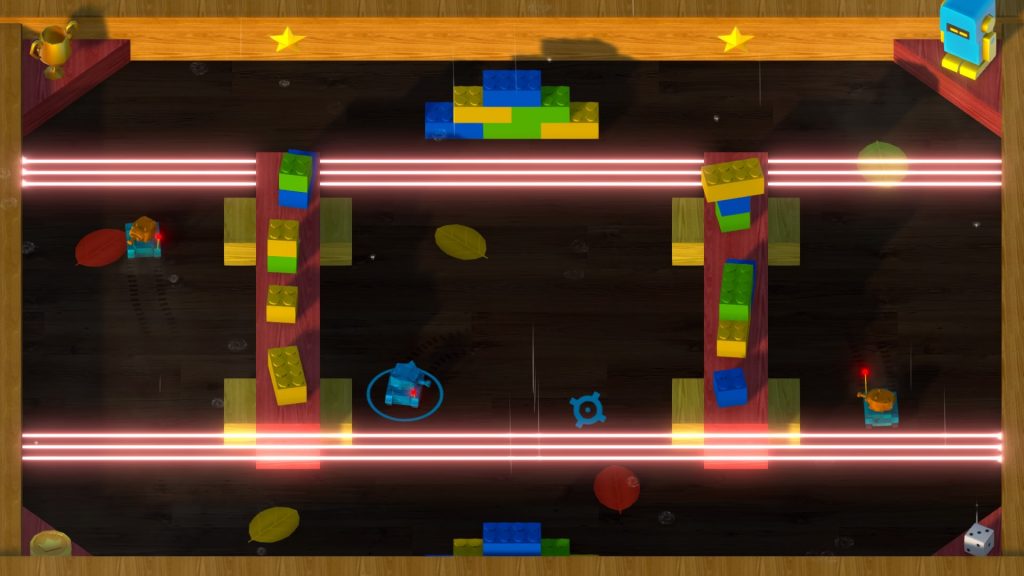 As well as your opponents gunning for you, you’ll face several different obstacles. Firstly there’s inert furniture by way of toy bricks et al, this acts as cover. Then there’s spikes and laser fences too. Mines also come into the equation.

Spikes are immediately fatal, thankfully the AI are susceptible to them as well as you are. There are two variants, one being fixed and the other being retractable. Occasionally the AI will nobble themselves in their haste to reach you, it’s nice when your opponent is fallible. 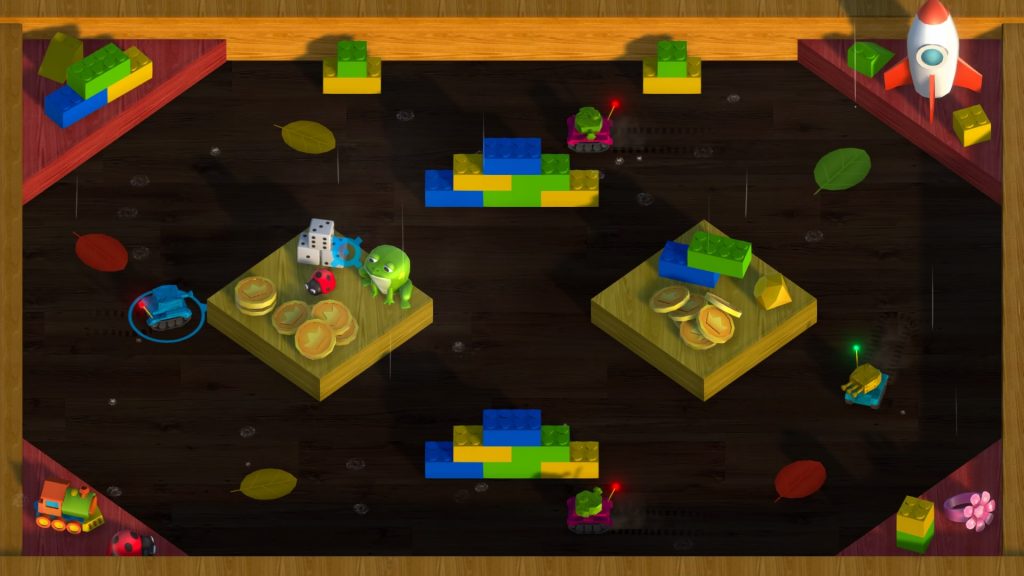 Other times they’ll zero in on you at mission beginning and make a beeline for you, others they’ll turtle in a corner as the AI fails to plot a route towards you. Perhaps this behaviour is programmed in to even the balance a little bit. It’s certainly welcome. The mines are often useful, the AI knows not to avoid them and sometimes amusingly nobbles itself before you even engage them.

Annoyingly laser fences don’t damage the enemy but they’ll kill you instantly. One later mission has you fenced in by a laser grid unable to move far, so you’ll have to quickly dispatch four opponents before they get a shot off and end your day. Other levels have swooping beam of instadeath that you’ll have to avoid quickly, a quick shot being often all you’ll manage before moving out of its lethal gaze. 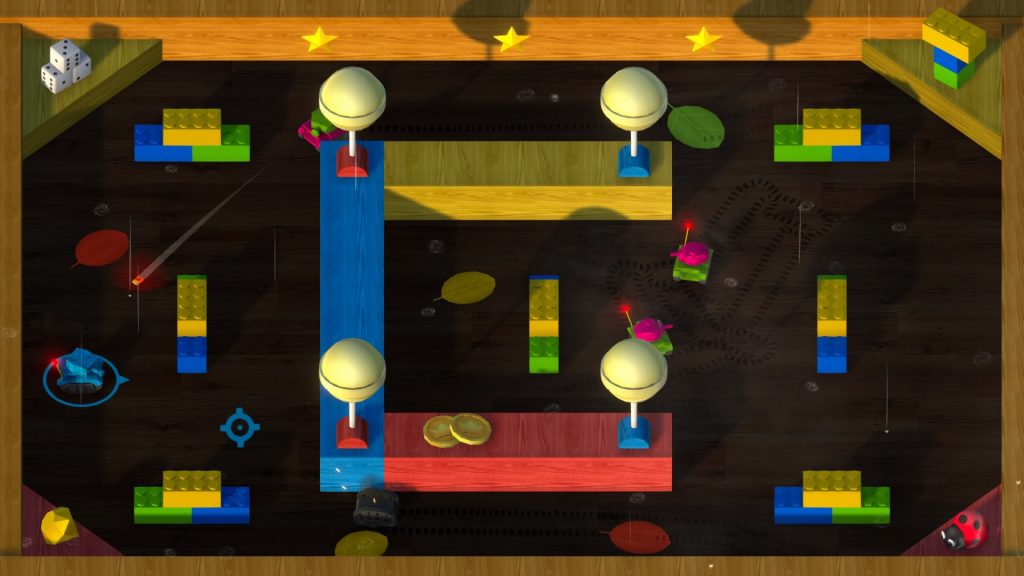 You can pick up occasional clock pickups which give you a brief chance to get several shots off before the enemy can return fire, but more often than not you probably won’t need it.

You’ll be deemed to have finished a level by merely destroying all opponents, that unlocks the bronze medal, or if you’re very quick and efficient, the gold or silver. The game completion percentage showed at 10% for us despite our having completed thirty seven of the sixty levels, the calculation being heavily weighted towards getting a gold medal.

Easier said than done as some missions end up degenerating into battles of attrition, so a bronze is all you’ll often manage. 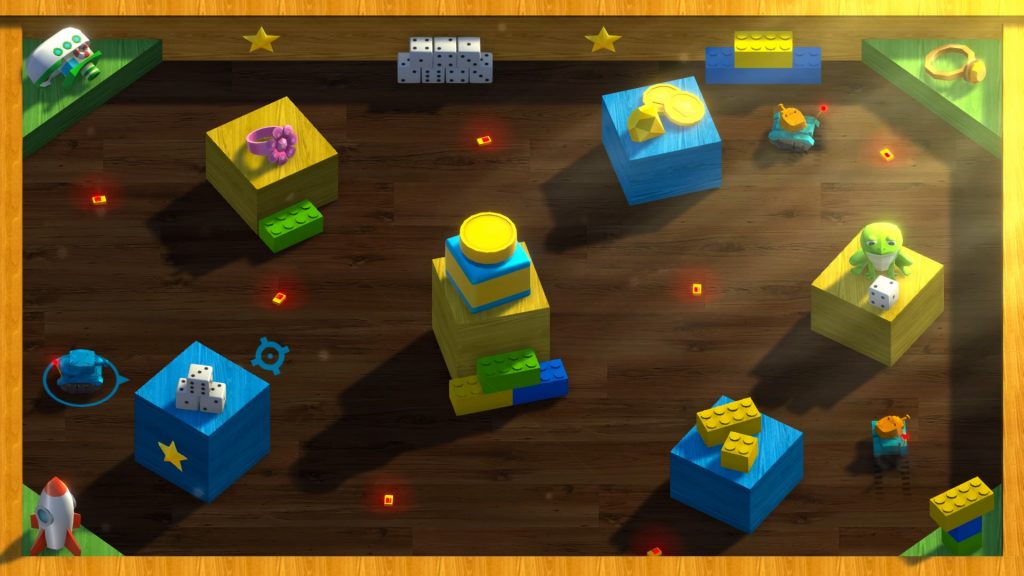 Later levels are dark with the only light sources being yours and the opponents, just as other levels have weather effects. We guess it’s meant to depict an outdoor play area but it’s a bit odd.

All in, Attack of the Toy Tanks is a great little game well suited to short sessions. As ever, if you have a Vita it’s just as well suited to playing on the train or during a lunchbreak. Don’t sack it off as soon as you get the platinum, carry on playing. It’s worth doing, if not actively going for gold medals throughout.

Summary
A fun action puzzler that you’ll feel compelled to keep playing long after the last trophy, moreso on Vita. Exactly what it says on the tin, Toy Tanks in abundance.