Real time strategy games on console don’t tend to come around too often and, when they do, they have to battle against a control scheme so different to a mouse and keyboard. Petroglyth Games are the latest to try and bring a PC title across to the big black boxes of home consoles and, whilst 8-Bit Armies does get some things right, it doesn’t quite come together. 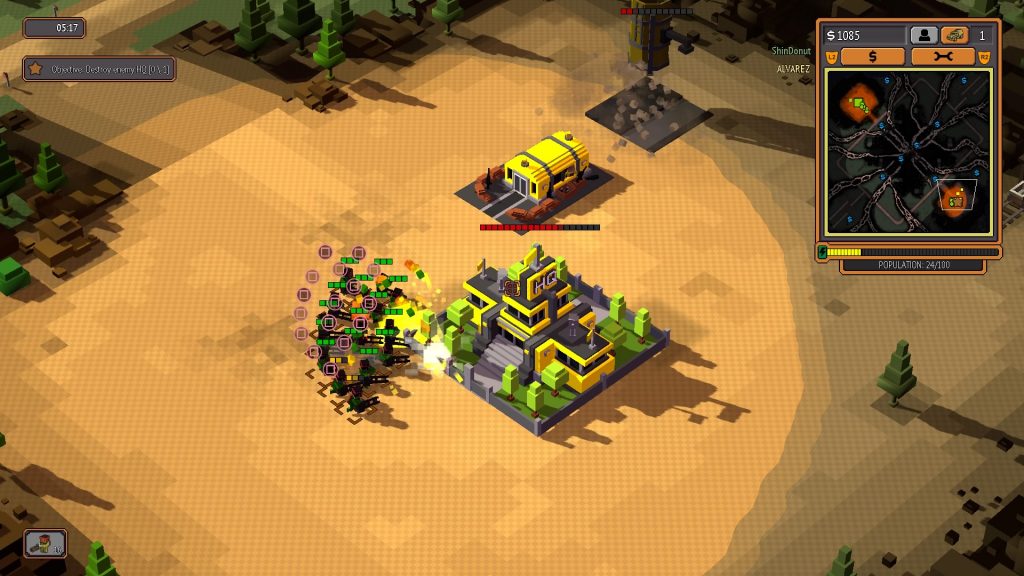 The first stumbling block with console real time strategy games is how to handle the interface and controls. 8-Bit Armies takes a sensible approach with radial menus used to handle construction of units and structures. It’s simple and effective. Units can be assigned to three different battalions which are mapped to your remaining face buttons. It does allow you to multitask although the default cursor speed feels a little slow. You can increase this in the options menu, luckily When it gets tricky and you need to fight on multiple fronts, the immediacy of the controls can feel welcome.

As the name suggests, 8-Bit Armies tries to strike a retro aesthetic. It’s 2.5D in execution with units inhabiting a blocky appearance. There’s a nice degree of charm to it with defeated units and destroyed structures exploding into glorious smithereens. They carry their own voice lines but they’re all very generic and by the numbers. You have a female voice to notify you of completed construction or current attacks going across the map. It’s good at keeping your mind on the action but it’s more about function than flourish. 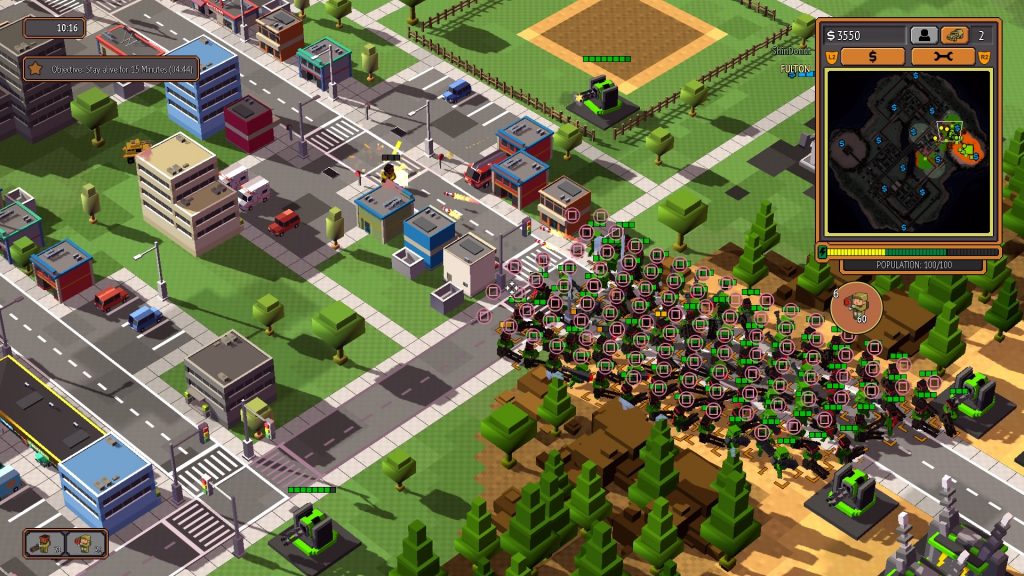 Your conflicts can be taken across two single-player campaigns and a co-op campaign. They offer a lot of content with each mission attempting to tackle a variety of objectives. The majority focus on destruction but sometimes you have to deal with surviving against the clock or focusing on individual structures or units. There’s a sense of a continuing war although you only get this from mission briefings with no cut-scenes bridging one mission to another. It lacks in presentation but at least the core action remains enjoyable. The AI does seem very quick on unit production, though. Even in skirmishes, I don’t quite feel we’re starting from a level playing field.

Map selection is plentiful with some offering environmental hazards and varied landscapes. It’s a world of perpetual sunshine and the maps feel intimate enough to cross with relative swiftness. They all carry a symmetrical appearance and the loading screens that accompany them do provide you with a little intel. They point out likely positions of the opposition bases, for starters. In the campaigns, this is pointed out more explicitly with stars on the map showing objectives. 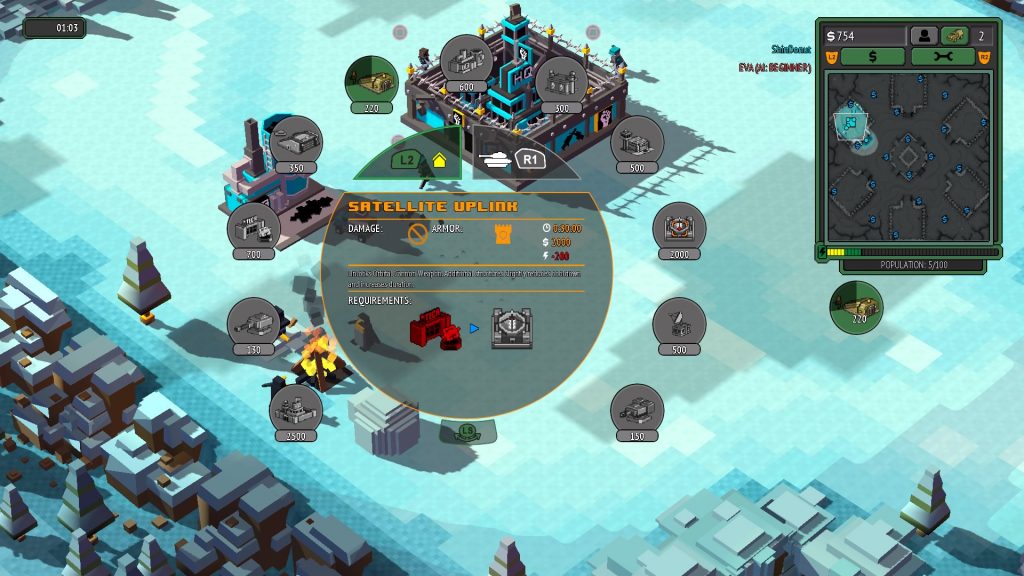 8-Bit Armies does come with other qualities of life. The tech tree is always available for you to view which allows for some forward planning. Even better, the build menu shows the prerequisites so you know exactly what you need to build the more complex structures and gain access to more devastating units. It helps maintain a forward momentum, although I do miss being able to tweak game speed. Options feel fairly slim and limiting, on the whole.

There’s three difficulty settings which seem to gate the additional objectives each mission tasks you with. It does incentivise you to tackle missions again with harder opposition but, if you remain on beginner AI, you can feel ill-equipped for some of the campaign’s difficulty spikes. It makes seeking out mystery boxes on each level feel imperative to gain additional funds or units.

Once you get past the aesthetic, 8-Bit Armies doesn’t really add much to the genre. In it’s devotion to the Command and Conquer formula, it brings into focus some of the things this game lacks. Campaign levels are introduced with text briefings and, whilst they are connected, they lack a presentational pinnace.

On top of that, the two factions share a lot of units between them. There’s little to distinguish the two besides the very, very late end of the tech tree. It progresses in a familiar way with bog-standard infantry giving way to more resilient tanks. There are other factions listed in the menus but, as far as I’m aware, 8-Bit Armies only gives you access to Renegades and Guardians. It’s a shame as some of the other factions offer a little more deviation in their arsenal and could really help keep this game fresh. 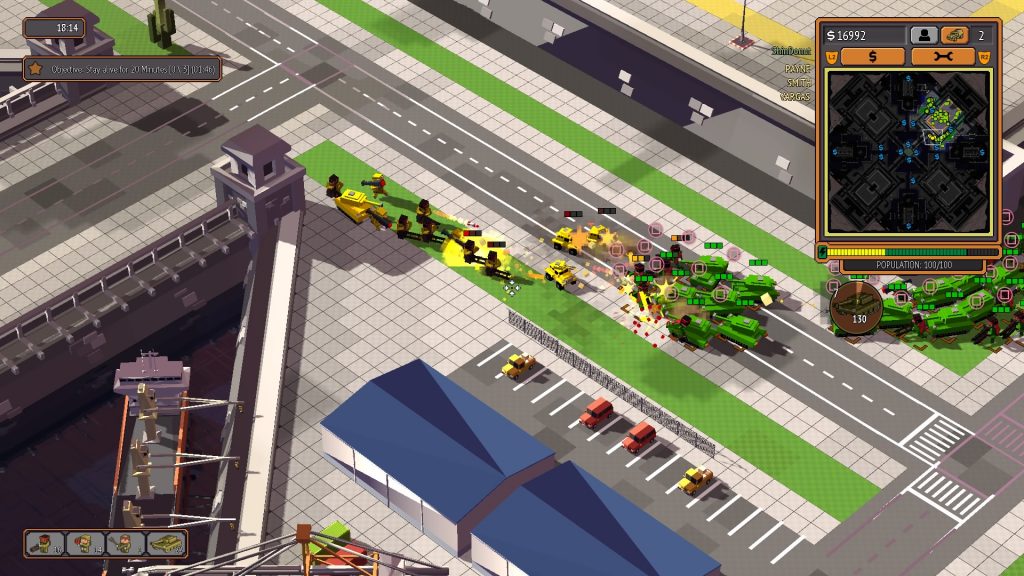 My largest concern with 8-Bit Armies is how close it adheres to the inspiration. If you’ve played Command and Conquer, you know what to expect, right down to the tech trees and flow of a match. Having two similar factions takes away any chance to really spread their wings and be creative narratively and in gameplay. It’s a nice nostalgic trip but one that’s not likely to last.

8-Bit Armies
6 Overall
Pros
+ Colourful aesthetic that lends itself well to destruction.
+ Familiar, nostalgic gameplay.
+ Plenty of single and multiplayer content.
+ Campaign goals that incentivise tackling harder challenges.
Cons
- Two available factions that don't differ much from each other.
- Campaign briefings offer an exclusively text-based story.
- AI can be quite brutal at times.
Summary
8-Bit Armies does well to tackle the control and interface issues that have marred the genre's translation to consoles. There's some good quality of life considerations that make the bread and butter gameplay enjoyable, if lacking in options. There's plenty of online and offline content but the lack of variety between the factions could lead to a stale, short-lived experience.