Many Faces is a single-screen platform shoot ’em up from the recently prolific Eastasiasoft and continues their recent trend for basic shoot ’em ups with very easily obtained platinum trophies.

In this game you play as an egg-shaped being (very reminiscent of the ZX Spectrum character Dizzy) who can walk left and right, leap, drop through platforms, dodge and shoot (which you do in a twin-stick style by aiming with the right stick and shooting with

).  A basic tutorial explains the controls and puts the emphasis firmly on dodging enemy fire which grants you a few frames of invincibility as you do so. 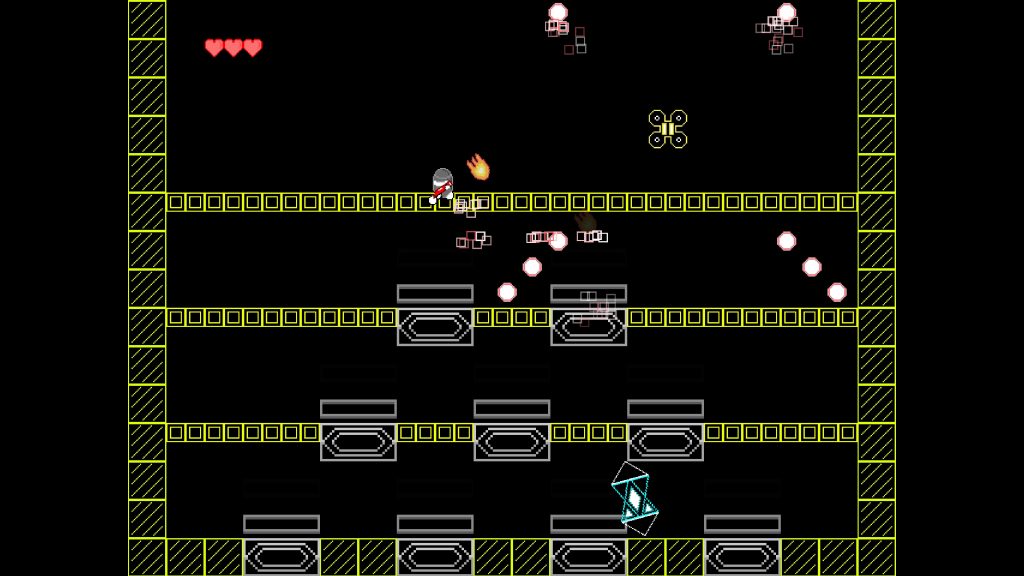 You have very basic firepower initially which puts you at a big disadvantage compared to the enemies who are able to spew quite a few bullets at you.  However, when you complete a level (all of which are randomly selected from a preset group) a treasure chest will appear and will grant you a new hat accessory.  These give you access to new abilities or weapon types and are quite varied.

Some are offensive minded and give you spread fire, explosives or rapid fire (which is annoying because it reduces the power of your bullets) while others add extra health and movement abilities.   You can get a quick text description of what the hats do but you do not have very much time at all to act on it before the next level starts. 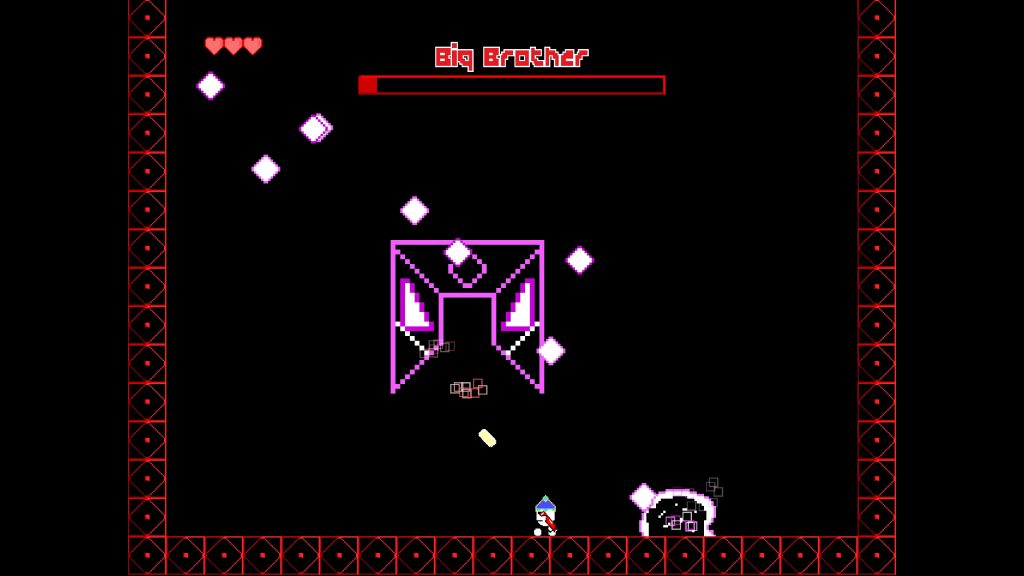 This is all well and good but we found that once we got the ability to shoot through platforms, we didn’t want to ever switch it up and none of the other abilities are particularly impressive.  Sure, it is nice to have a bit of extra firepower but you never really feel like you are powerful, something that is always a bit disappointing when it happens in a shooter.

Thankfully the game isn’t too tough (although if you want a real challenge you can up the difficulty).  The enemies can quickly fill the screen up with bullets but we didn’t find ourselves relying much on the dodge move, mainly because it makes you drop your current hat, and were able to get through several levels and boss battles without issue.  These boss battles are a welcome change of pace and require a bit more skill, strategy and memorisation to beat but there are only seven of them and you’ll figure them out pretty quickly.   The boss battles happen on every fourth level until you face off against the final boss on screen 17. 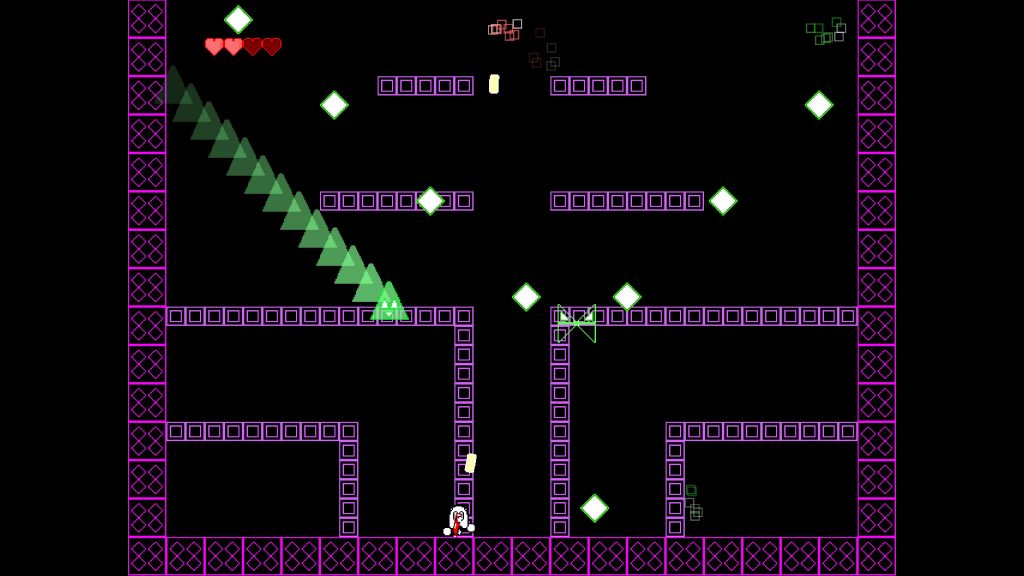 If that all sounds simple enough, that’s because it is.  There’s not much else to it.  The levels are built from platforms, disappearing platforms, anti-grav platforms and spikes but really you’ll just want to go to the emptiest part of the screen so that you can actually get line of sight on your enemies (hence why the ability to shoot through them is so useful) but in terms of any kind of strategy, just avoid the bullets and shoot back.

In keeping with the very simple gameplay, the presentation is a mix of 8-bit, super simplistic visuals and some very retro music which is exactly what we’re used to from these cheap and cheerful trophy-flinging games but we can’t help but be a bit disappointed that everyone seems to be cheaping out on good graphics and sound these days. 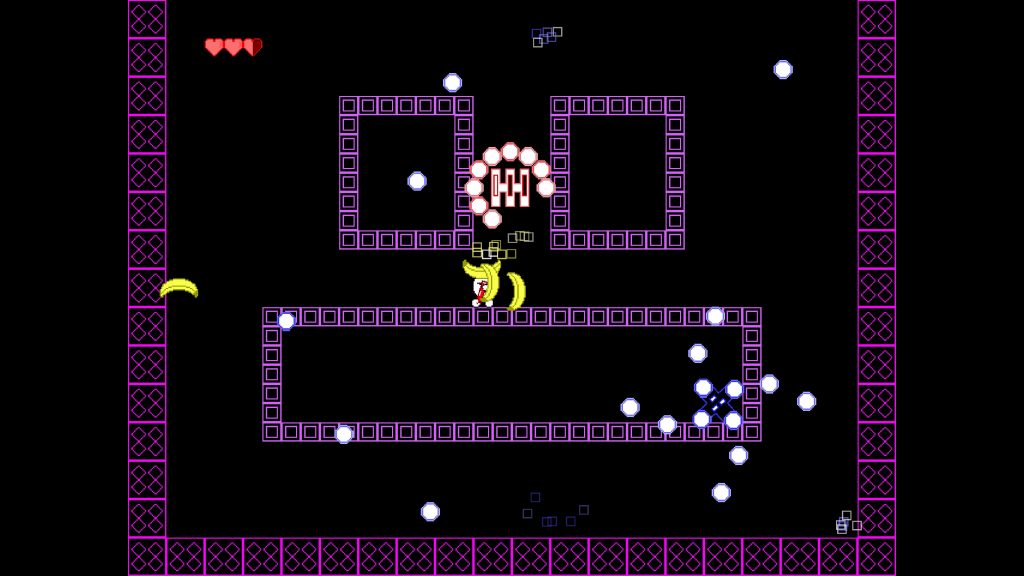 While we’re not ones for harping on about trophies, Eastasiasoft do pretty much guarantee you a very easy platinum.  The ‘hardest’ trophies involve beating a certain number of bosses but, as with their other games, you can just beat the first boss in the game three times across different playthroughs rather than in the same game.  Not that beating three bosses in a single run would be hard but they’ve done this on a few recent shoot ’em ups and it feels a little unnecessary.

So why are we mentioning it?  Well, because beyond getting the trophies, there are no real incentives for continued play.  There are no leaderboards (on or offline) and so what are you playing for?  A shoot ’em up with no score?  Not even a timer to encourage speedruns?  The game is reasonably enjoyable for the time it lasts but it has the life of a mayfly and it doesn’t matter how cheap it is when you feel like you’ve seen everything after 15 minutes.

Compared to Eastasiasoft’s other recent releases, this is a bit too basic, it lacks the really good music that those games had and the level of challenge isn’t really there.  This one also has the most basic presentation and so we’re left scratching our heads and wondering quite what it does have going for it that we haven’t seen before.