Dread Nautical comes to us from Zen Studios of Pinball FX fame. It’s a turn based strategy game on a cruise liner. Only as well as people on the ship, there are various monsters out to kill you. The ship is made up of twenty decks and your ultimate goal on each deck is to blow the foghorn. It transpires this ends each day as your characters fall into unconsciousness.

At the outset you’ll choose one of four character types, our first being the world weary gumshoe Sam Spade type.  His main trait aside from snarky asides is an aptitude with firearms. There’s a Foxy Brown type (with healing) and an Asian fella with a fine line in melee combat.  There’s also a geeky lass who recruits new party members quicker.

You see, a malevolent unseen force is exerting an influence on the ship. This is affecting all those on board, some more than others. Those worse off have been turned into mindless zombies, or in the terminology of Dread Nautical, thralls. The remainder wander the halls in varying states of bewilderment; the first of which you encounter is a retired soldier named Bill. At first he’s a bit guarded but will eventually join you as an ally. 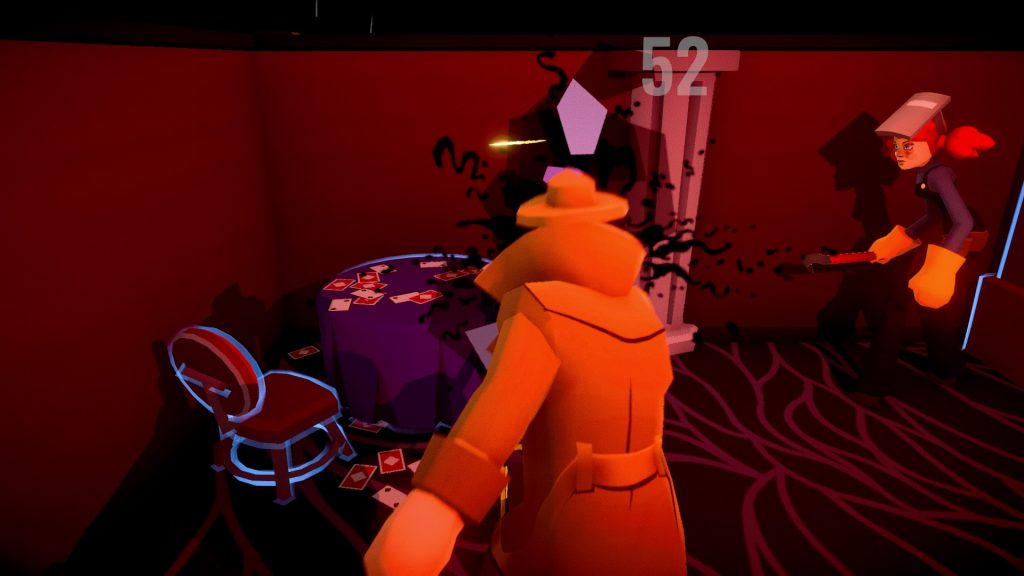 It becomes apparent that you’re the first survivor that’s beginning to remember events from previous days. So it falls to you to unravel the mystery, one floor at a time. We played on normal difficulty which was a stiff challenge, never mind trying it on hardcore difficulty.

At first you’ll have no weapons or armour when you take the lift to the first floor. Thankfully there are weapons and blunt objects to hand. These pipes and assorted other items you can batter the luckless thralls into submission with. The general rule of thumb is the more powerful the cudgel, the more AP you use. Though occasionally you’ll come across a weapon that does high damage for minimal cost. but the trade-off is often low durability.

Yes, on top of having to manage action points you’ll have to be mindful of item durability. In the early game this makes things rather more challenging. Moreso since you’ll generally have limited inventory slots and just a weapon or two to hand. Thankfully our old soldier pal had spare space to act the workhorse of the group. You can handily trade items between your party you see. It comes in especially handy when one of you is taking a battering and needs to heal up. 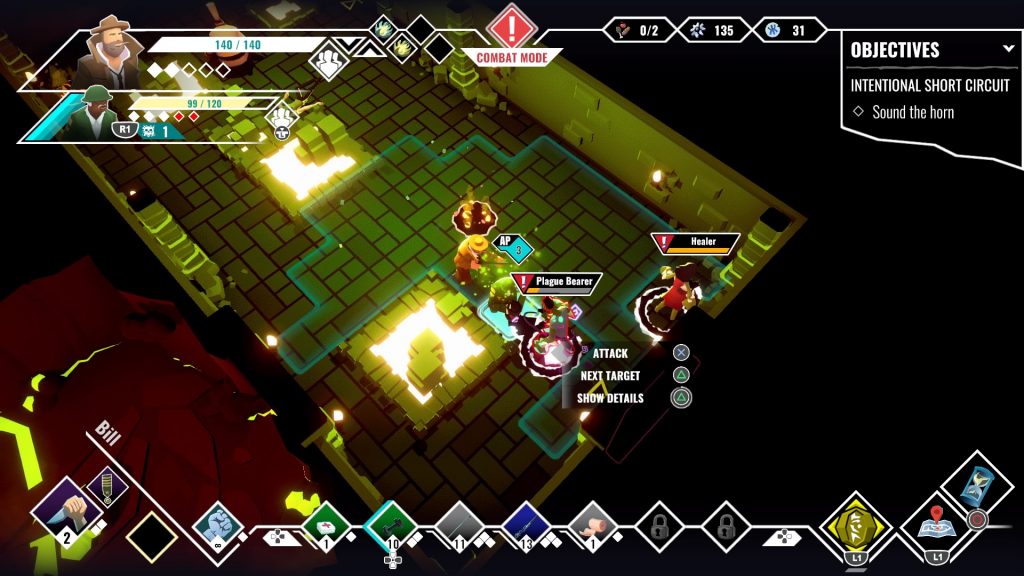 Thankfully things improve a little when you gain a few levels and added inventory space. Dread Nautical ups the ante further though. You’ll be given the prospect of previously locked compartments in the aft of the deck. Only in the case of a few, they contain a boss enemy and several additional enemies. You’ll do well to beat them, let alone avoid wiping altogether.

Though at the time of our playthrough, you could kite boss characters through narrow compartments to see to them individually. Some of the harder bosses will have you dead in a couple of moves and all your hard work on that deck goes to pot as you die. We notice there was a day one patch so maybe this is no longer the case. Though in our eyes, if the game allows it. It’s a valid strategy. Just as cheesing it to the level exit when on low health is another perfectly valid strategy. He who survives, lives to fight another day.

You’ll get more of a feel for how certain enemy types will react when you get in range. For example, the roller enemy will do more damage if they get a decent run up to smash into you. But if you get up close, they can’t deploy their special attack. As you defeat each enemy in turn, they’re added to the in-game codex automatically. If you discover a particular vulnerability that’s also noted automatically. 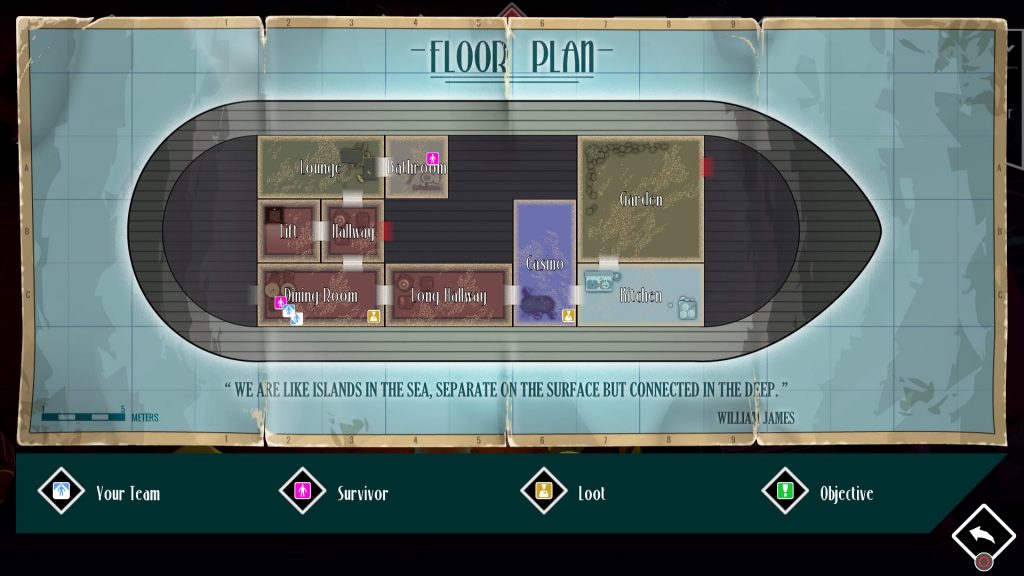 As you progress through the decks, you’ll unlock eldritch tome pages that allow you to translate the otherworldly glyphs that hint at the evil lurking in the shadows. However, the more glyphs you translate, the more tenuous your characters’ grip on reality and their own sanity becomes. In addition with the fact that a speedy exit out of a level can leave you low on health and food, we found ourselves in bad shape by floor twelve. Low health leads to frayed ends of sanity and in some cases, outright refusal to leave your basecamp.

On the subject of your basecamp, it’s a little like the safe haven in Dead Rising in that it’s your homebase. You can upgrade and repair your items, as well as assign new skills to your party. You can eventually build extra beds to accommodate extra party members as well, but the lift to other floors remains fixed at a party of three maximum.

An additional mechanic comes into play in later levels. The more of a ruckus you create, the more the enemy becomes aware of your presence. You’ll be making a speedier exit from that deck if your threat indicator gets too hot, put it that way. 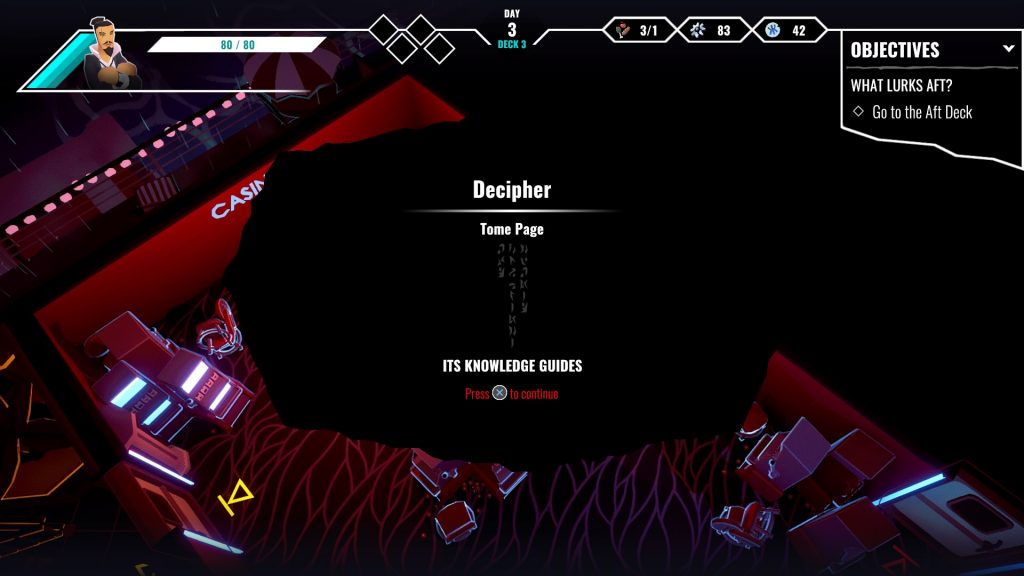 This was exacerbated further by our trying to dismiss one party member for another who wanted to join us, but failing get the new party member to join. It seemed unnecessarily fiddly and left us in the unenviable position of being one party member short. Floor thirteen proved to be a step too far, especially when our remaining companion outright refused to join us. Instead, we went solo to floor seven and died at the first significant enemy encounter. A promising run brought to a lurching halt due to fiddly party management.

Despite this, we’re hooked. We’re hoping that we can gather sufficient resources on easier floors to get Bill to rejoin us and hopefully get back on track. Lessons are often hard taught by the mistakes you make, this is definitely true of Dread Nautical. Yes, the isometric view might be anathema to some. Just as the idiosyncratic animation in cutscenes is a bit odd too. But what we have here is a solid horror themed turnbased game that is perfect for these days holed up in our own homes.

Cons
- Dismissing and adding members is a mess
- Interactions with other survivors are odd at best
- You can kite bosses without drawing adds
Summary
Dread Nautical is a nails hard tactics game with a Lovecraftian flavour. It's really quite good.