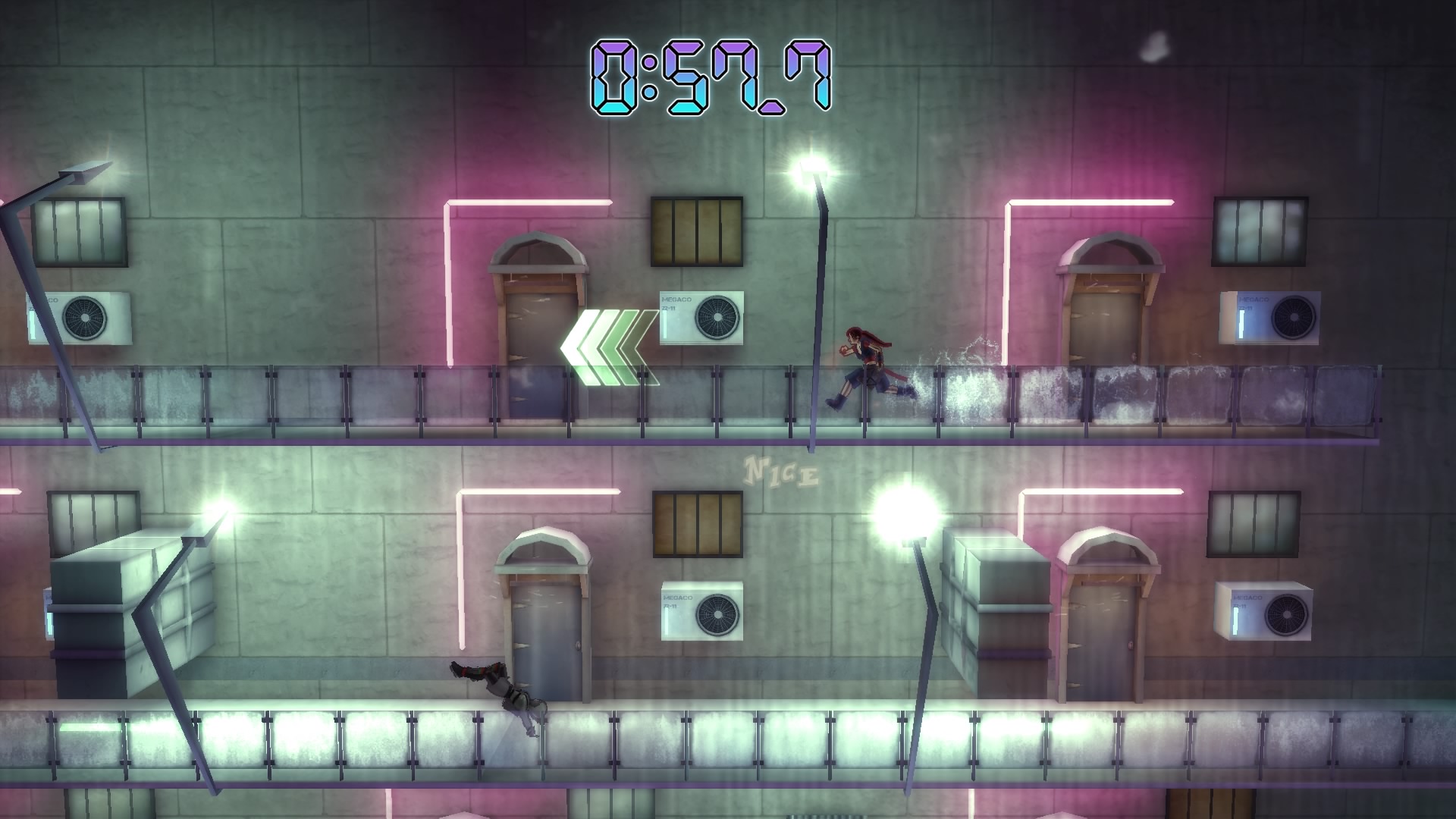 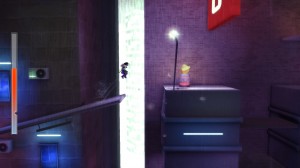 Ninja-based platforming games are regular staple of the indie scene and where most of them seem to focus on pixel-perfect jumping or harrowingly difficult speed runs, Ninja Pizza Girl by Disparity Games takes a different approach.

You play as Gemma, a very talented pizza delivery girl who works for her dad. She’s underpaid but takes her job seriously, delivering pizzas by hand in a dystopian city using a combination of jumps, slides and wall runs. Her dad is very passionate about pizza and his customers. However, the corporations are trying to corner the market with their low-quality pizzas and so it is up to you to make sure the pizzas are delivered on time to keep the customers loyal. 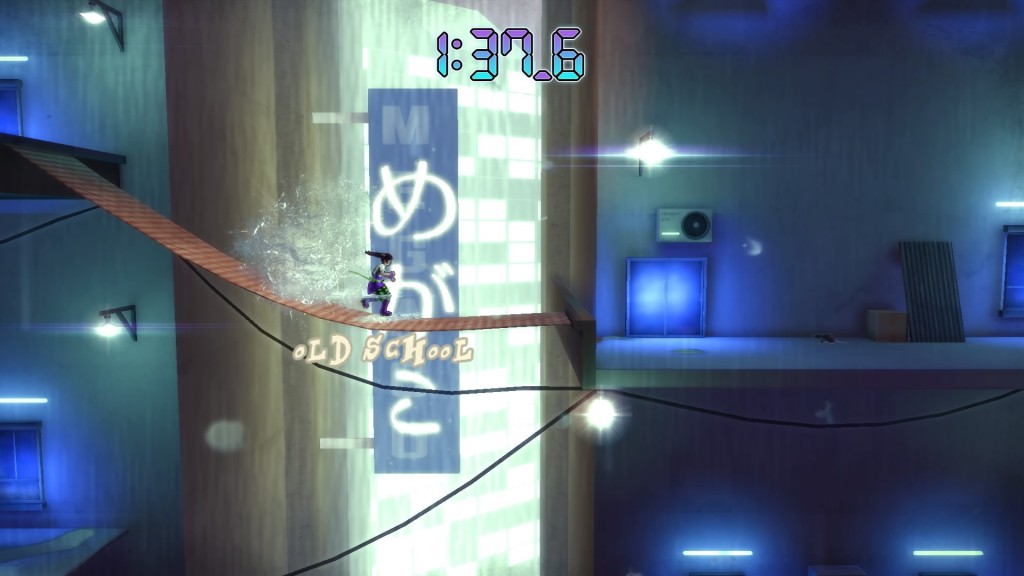 So far, so predictable. And when it comes to the gameplay, Ninja Pizza Girl doesn’t offer much in the way of surprises. Unlike N++ or Ten Second Ninja, the graphics here are a bit larger and the world scrolls so everything looks a bit better than the usual 8-bit/Flash style graphics you normally get. It also means the game is much less about those pixel-perfect monents. Which is great as it means Ninja Pizza Girl is way more accessible than you might expect.

Running around the early levels, the game feels like a 2.5D Mirror’s Edge (which is exactly what the iOS port of Mirror’s Edge was). Navigating the levels feels nice and natural and while it’s not super slick, you’re not wrestling the controls either. They could certainly be a tad more responsive and you can feel a bit floaty at times but when you mess up, it’s your fault generally. 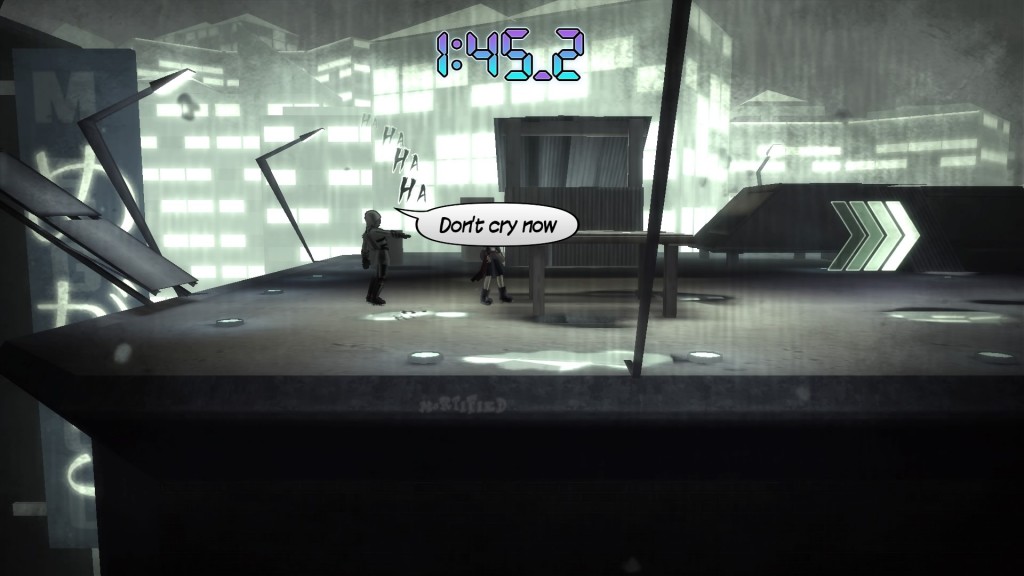 Later on, enemies are introduced. Running into them will slow you down but you can avoid them by jumping over them or, if there’s no way around, temporarily taking them out by sliding into or dive kicking them. This is where the timing could certainly use a little tweaking and the hidden enemies are a bit of a pain. You’ll be replaying levels though, so you’ll soon learn where they are.

What sets Ninja Pizza Girl aside is the message behind the game. Gemma comes across as a genuinely likeable character, as do her father and brother, but the ninjas who deliver for the corporation aren’t so nice. If they manage to stop you, they’ll call you names and berate you which will darken Gemma’s spirits, the visuals will also lose a little more colour. If things get really bad, Gemma will fall to her knees which will require a little button-mashing to get her out of that slump. In a game where every second counts, this is obviously crucial to the gameplay but you can find yourself being more concerned with her than your final time. 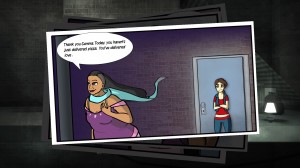 Along the way, Gemma helps the people that she meets. Some are dealing with controlling family members where others just can’t reveal their feelings to people they love. You get a sense that Ninja Pizza Girl is trying a tad too hard with some of the stories but Disparity Games want to highlight issues and while an indie game about feelings may not ultimately change much, you can’t help but support the message.

There’s a solid game here with a range of difficulty settings available depending on if you want to just enjoy it or if you want the hardcore challenge and as serious as the game’s message is, it’s not as heavy-handed as you might think. Ninja Pizza Girl isn’t going to revolutionise the platformer genre by any means but by combining character with solid fundamentals, it delivers something that deserves to be checked out.