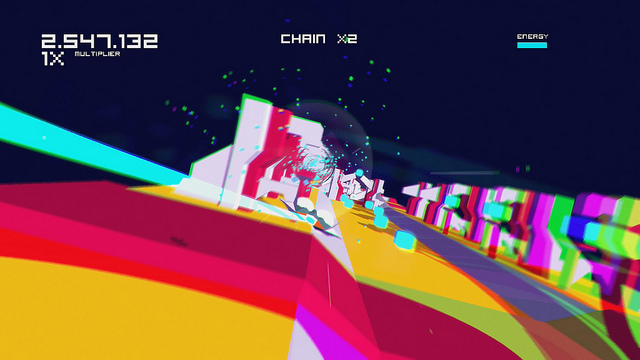 Futuridium EP (Extended Play) Deluxe by Italian coders Mixed Bag is a game with its heart in retrogaming.  Simply, it involves you flying along various structures in space, avoiding defensive firepower and shooting small cubes.  Destroy all the cubes and the level’s core is revealed.  Destroy that and you’re off to the next stage.  It’s a simple premise and each level involves you trying to take the most direct route through the cubes so as to keep your combo going and your score increasing.  Good scores are based on speed, accuracy and not dying so in many ways it’s like recent PS+ freebie Velocity 2X albeit viewed from another perspective. 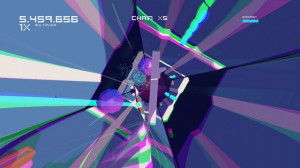 These screenshots tell you basically nothing.

As well as flying forward and shooting, you can also turbo (to get in positions to continue your combo) and flip the ship around.  As soon as I pressed that button I went ‘ah!  This is just Uridium,’ a top-down horizontally-scrolling shoot ’em up from the ’80s that came to prominence on the Commodore 64.  Suddenly the game’s name made sense.  They’ve injected that 8-bit gameplay pedigree into the shell of Star Fox and the overall package works.

Now I never liked Uridium that much but this reimagining is a lot more fun to play.  The game totals up how many blocks you destroy in each game and unlocks extra credits so you are always working towards progression.   Simple to understand objectives that easy enough to meet but will take a lot of practice to master.  Trophies are on offer for people skillful enough to beat the game in one credit but the content whores among you, myself included, at least get to see everything Futuridium has to offer.

With each level being short and to the point, this is a much more immediate game than many other indie efforts and that makes it perfect for quick goes on the PS4 and especially the Vita where its pick up and play nature makes it perfect Vita fodder.  Although it doesn’t appear to support cross-saving which is a bit of a shame as it would have been a very nice feature.  It is cross-buy though so you lucky owners of both systems get even more for your bucks.

Futuridium is a score-chasers game.  Getting through the levels should be possible for most gamers given the additional credits the game throws at you.  Much like Hotline Miami and the afforementioned Velocity 2X, the big scores come from operating in the zone, making decisions quickly and having the joypad chops to pull them off.  The controls are simple and accurate on both systems and most of your deaths will come from thinking you can get in front of the next block with enough time to destroy it.  A decision you’ll repeatedly regret.  Luckily death isn’t going to end your game as each level gives you a slowly-decreasing amount of energy which acts as a time limit that can be slightly extending with each block you destroy. 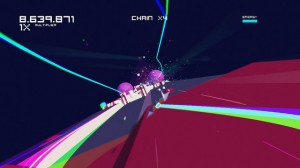 So here’s what happens. Got that? Good.

What sets Futuridium apart from many shooters is its distinctive visuals.  The game sacrifices detail and instead builds its stages with searing blocks of colour, like a neon Rez if you will.  It looks fabulous on the Vita and especially delicious on my Vita (OLED model, baby) and makes a change from all the 16-bit stylings we’ve been seeing recently.  The sophisticated electro soundtrack by Le Dégout (dunno!) also really adds to the experience as well. Getting the visuals and audio to mix in games like this is so important and Futuridium gets it spot on.  At the time of writing we don’t know the price but if they set it right, this is the kind of game that everyone should like.  It’s simple, addictive, very well-presented and can hopefully inspire some competitive leaderboard larks amongst you and your PSN friends.

We really like Futuridium EP Deluxe.  It looks nice enough to warrant being on the PS4, is perfectly suited to the Vita and ends up adding to Sony’s catalogue of high-quality indie titles.  It should end up being popular with current and retro gamers alike and while it may not have much depth or any kind of story (I consider that a bonus to be honest) and some of the ‘boss’ levels can be a bit of a prick, this is such a likeable game.  Suddenly we’re very keen to see what Mixed Bag come up with next.

Futuridium EP Deluxe
7 Overall
Pros
+ Immediate gameplay + Tight controls + Impressive visuals + Great soundtrack
Cons
- A little lacking in depth - Some levels can be a little too tough
Summary
It's rare when a homage to an old retro game manages to improve on it but we think Futuridium does. The difficulty detracts a tad from it but overall this a great indie arcade shooter.