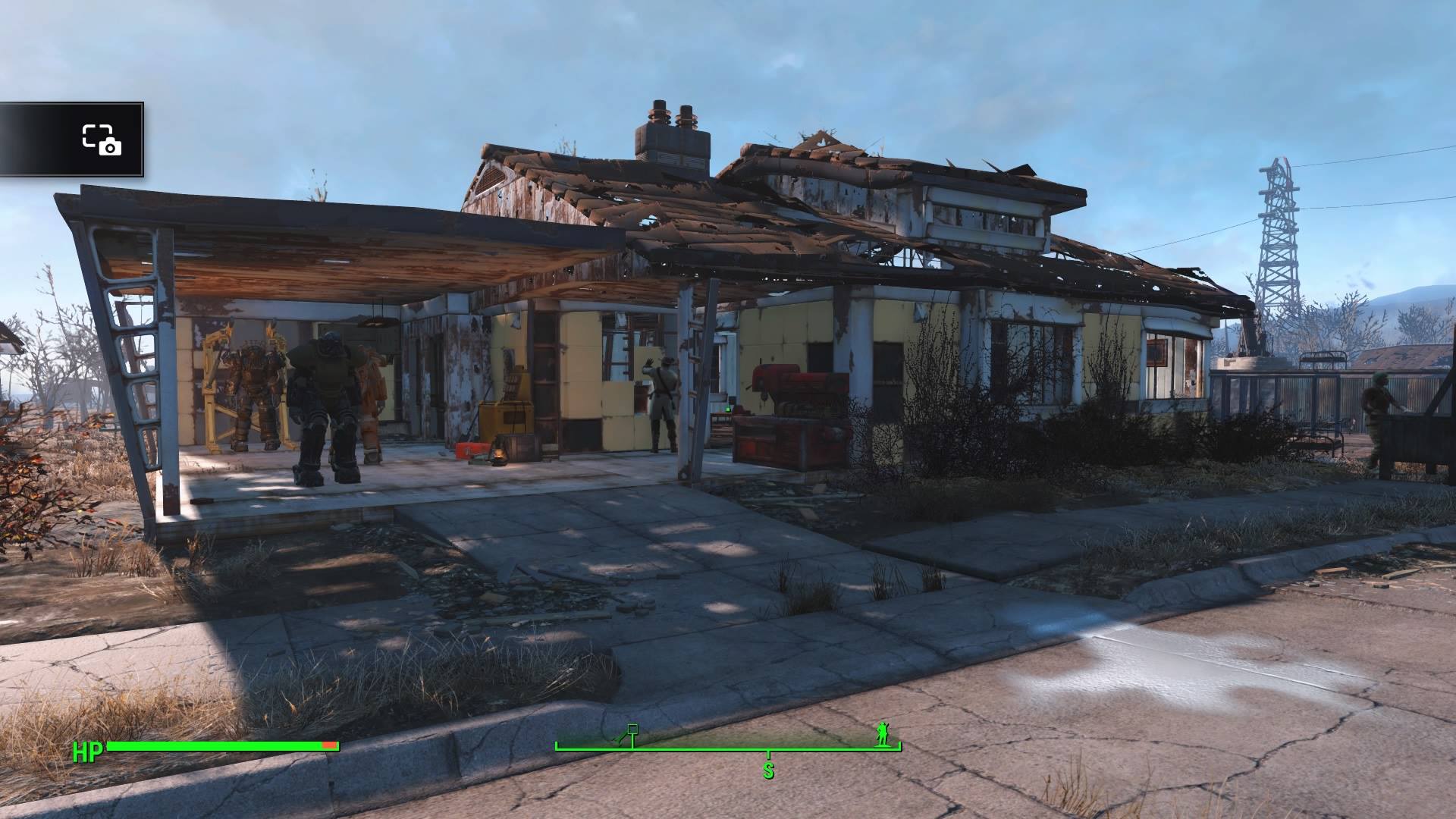 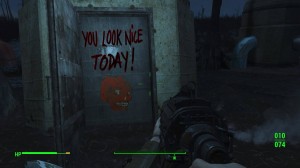 If you have been living above ground for the previous few months then it would have been difficult to miss the smiling, winking face of Fallouts poster child. From the outside looking in, you would have thought that the jumpsuit wearing cartoon was the gaming answer to Mickey Mouse. Instead Vault boy stands as a gleeful mask hiding the gritty subject matter featuring naughty words, theft and violent acts. Bethesda bravely introduced Fallout 4 to an unassuming crowd at E3 this year, while it was always an inevitable release the schedule in which it would show was definitely in question. Among the clamouring of fans for snippets of information and screenshots there was always going to be some doubt as to what Bethesda has actually done to advance this beloved series.

New to Fallout 4 is a whole host of customisation options which let you tinker with the stats and properties of your armour, weapons and even the world around you. The countless swathes of junk that you would normally pass up or chuck at vendors as currency fodder now have a purpose and can be crushed down into raw materials or building blocks for your home base. The weapon customisation harks similar to that of the like of Dark Souls and Bloodborne, giving any normal, otherwise disposable weapon a chance to be its own powerhouse, even allowing you to use the same pistol throughout the entirety of the game if you wanted to. I find that this element is the better way of going about things as opposed to the uncertainty that came with Fallout 3‘s weapon durability, it allows you to give your weapons a name and from an RPG standpoint it lets your character have a trusty side arm to keep. Armour also has this upgrade ability, however I found this less as engaging. It is genuinely difficult to make a character that looks as you would like them to be, often times if you want the best result you have to sacrifice fashion for a more messy and segmented look. This is further segmented by legendary items which can be found on the corpses of souped up monsters symbolised in game with a star next to their name. These items provide attractive stat boosts which let you add an extra point to a perk or can increase your damage or durability to devastating levels. While these armour pieces act the part and reward the player into taking on more daunting challenges in the end you character will just end up looking like the tin man after a weekend on the piss. 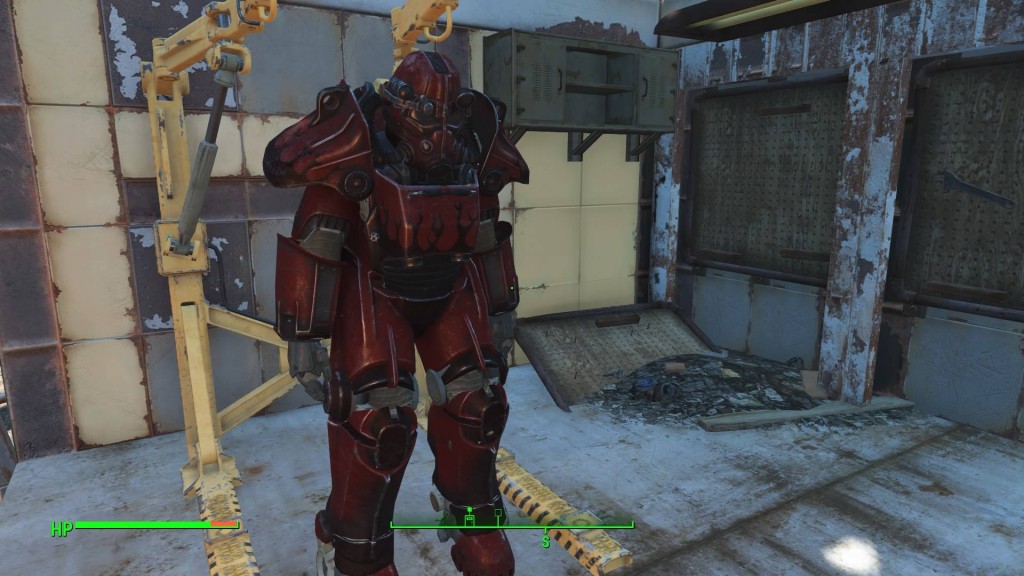 The aforementioned world building takes a Minecraftian approach to enhancing the various settlements you encounter throughout the map. You can use salvaged materials to freely place down walls and furniture to your liking, allowing you to really put your own stamp on the world as opposed to the fixed abodes of previous Bethesda games. While this is pretty cool on paper, it lacks any real substance and while you can make a visually impressive town or structure it still feels none the less emptier than before. It never really feels like the settlement building is a necessary part of the story which is both a blessing and a curse. Barring a couple of short story missions you could completely ignore this aspect of the game entirely. One of the biggest aspects of Fallout and one that rings true to me is that it is game where collecting is downright encouraged. Settlement building could have been a greater catalyst for this compulsive habit however due to an annoying bug which remains present from previous Bethesda RPG’s items have a habit of falling through shelves. So if you want to proudly display your assembled Mr Handy figure then you may well find it falling through the world next time you return with a variant colour. Instead all of my collectibles and earnings from the world remain in a grotty chest with nothing on the walls, which is nothing short of a damn shame.

Grabbing all of the junk to fuel these customisations brings about a Bethesda trope that should have been left in the dark a long time ago. Encumbrance hits hard and unexpectedly, Immediately slowing your characters speed to a crawl as you fumble inside your inventory for the lesser junk you need to remove to get moving at a decent speed again. If you have ever played a Bethesda RPG then you know exactly where I am coming from. Some would argue that this is realistic, or that it adds strategy to the proceedings when instead I feel nothing but frustration towards it and limitation. In a game about collecting junk and incremental upgrades it acts as nothing but a joy killer and I refuse to believe that this is the most elegant game play solution when it constantly sends you having to drop what you want, warp home, dump the junk, fast travel back, pick up the shit and then warp back home. It is tedious and needs to go. 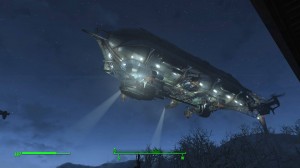 While these glaring defects of Bethesda’s output remain blights on the overall quality of the product, a few things have changed for the better. The combat and shooting feels snappier than ever, affording some of the things learnt from Rage Bethesda have managed to add weight to weapons and make shooting feel like a viable option as opposed to filling up action points to use the time slowing Vats mode. Instead of freezing time entirely Vats now sends enemies into a bullet time, giving the player a breather instead of feeling like a win button like it was in Fallout 3. The overall atmosphere for the game has been lightened also. Things aren’t nearly as dreary as they were in F3‘s Capital Wasteland, with blue skies that brighten the world and the hopeful, uplifting music that plays around settlements. Fallout has never looked this good, even if it is not the massive leap in graphics that people would have expected. In a similar note the storytelling has improved, at least for the side missions. The main story is something that quite easily takes a backseat and if anything just acts as a breadcrumb trail that branches off into several other branches.

Fallout 4
8 Overall
Pros
+ A large, populated world with tonnes of genuinely well thought out side quests and unparalleled exploration. + Added weapon/ character customisation options that are genuinely worthwhile. + The gameplay genuinely feels like it comes down to your choice, even if story elements don't. + Takes what worked with Fallout 3 and improves on it, however incrementally.
Cons
- Awful AI pathing, companions constantly get in the way while others glitch on scenery. - Immersion breaking jankiness, typical at this point of a Bethesda RPG. - The Main story line is neither thought provoking or overly interesting. - Encumbrance can go fuck itself.
Summary
If you are looking for something new or noteworthy to differentiate this game from its predecessor then Fallout 4 would be fairly difficult to recommend. Just about everything fun or interesting to do with this game can be found nestled in the code of its parent, this goes for the bugs and glitches as well. However if you are looking for more of the same with mildly jazzed up visuals, better shooting mechanics and a blue sky then you need look no further. Fallout 3 was an excellent game and the fourth is no different.