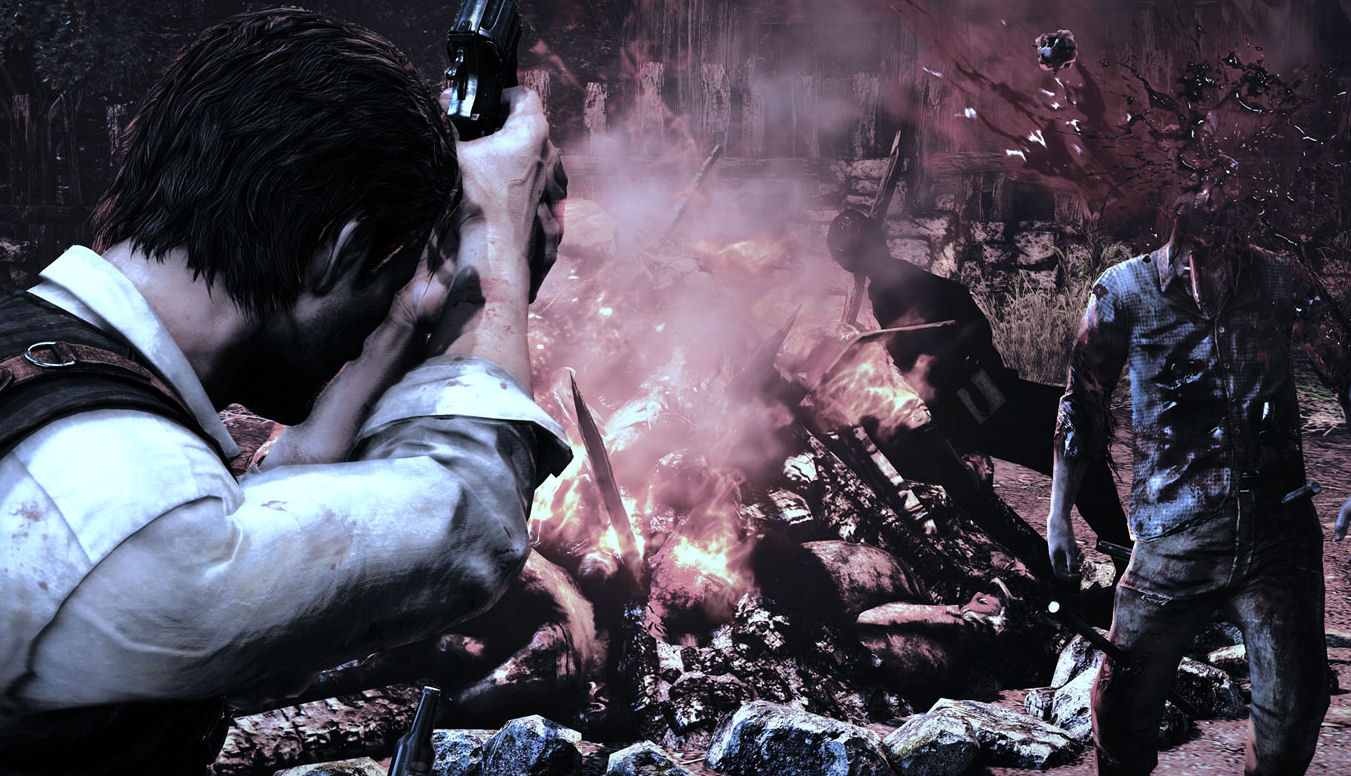 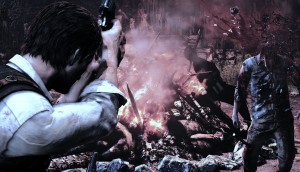 There was a moment in The Evil Within where I experienced pure horror. I stepped into the shoes of Detective Sebastien Castellanos as he trod in rain-drenched mud, through a dank village filled with ghoulish, brainwashed, totally not zombie people. In this village there was a barn which held a hulking, faceless beast wrapped in chains. As he struggled against them I knew that shit was about to go down, so I planned an attack; cleared the village of supplies and ammunition so that I could unload some good old fashioned lead justice on his face.

What happened next resulted in a Scooby Doo style chase through the village as he came at me with a massive chainsaw. This guy was a bullet sponge but all he needed was one or two good hits on me to ensure that I would never need to worry about hair gel ever again. As supplies got fewer and desperation became a factor I ran into his original domain. He was standing next to a chest the whole time! Feeling that I had given him the slip I set about opening the chest, hoping that the goodies inside would lead to my salvation. Suddenly he popped up out of nowhere, right of thin air next to where I was standing. You can guess what happened next.

This is where the horror set in. Shinji Mikami was responsible for this, one of the most hy ped up horror games since he created the genre-defining Resident Evil 4. I would be very hard pressed to say that this kind of thing is good enough. Especially considering that Resident Evil 4 was nine years ago. Fair enough though, Resident Evil 4 was low on scares and The Evil Within goes some way to rectify that issue. But faults detract so much from a genre that is built on the experience and immersion that it smears a large part of a product that could have been amazing.

Instead The Evil Within presents itself as a hard game to love. On one hand you have the instances such as the one above, where careful planning, stealth and exploration can be punished due to momentary lapses of design and programming, while on the other you get a decent homage to one of the best horror titles ever created, made by the person that shaped survival games as we know them today. Only this time the game focusses more on the scares and grotesque enemies than the action of the latter Resi games. 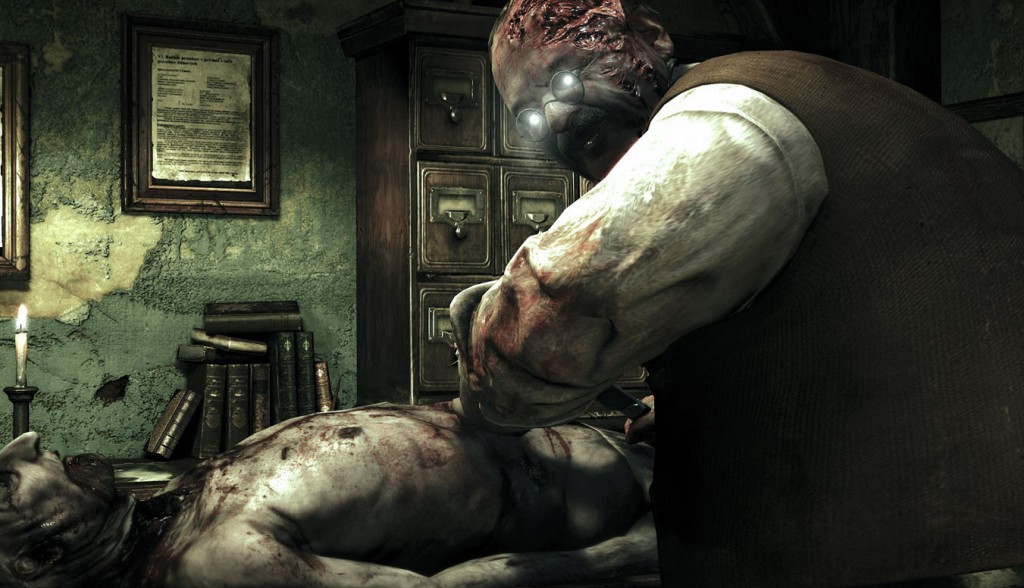 When you get through the opening chapters of the game everything starts to open up. Though the environments wreak of familiarity with castles, churches and mansions littering your path through the story it does give you a good reminder of that pedigree that Mikami can bring to the plate. Just like Resident Evil 4 the combat can feel as invigorating as it is frustrating.  Ammo is as scarce as you would expect from a survival horror so most fighting situations come down to your wits and how you use the environment to escape or dispatch foes. There is a real sense of risk and reward as you get to choose whether to disarm a particularly nasty trap which is triggered by proximity, doing so would mean that you couldn’t set it off on yourself but leaving it behind means that you can lure the dopey enemies into it, rewarding you with an instant kill and less wasted ammunition. 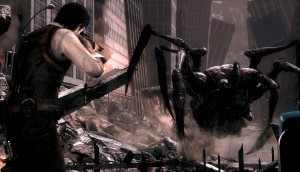 The story has its moments too. The narrative may be about as messy as a Damon Lindelof magnum opus but it drip feeds you enough to want to continue through it. Especially as the machinations of horror get more complex and start to take form around the antagonist Ruvik who’se gravelly voice is provided by Jackie Earle Haley, the same voice behind Rorschach in the Watchmen and Freddy in The Nightmare on Elm Street remake. The voice acting and sound is well realised with enemy footfalls being suitably easy to pinpoint and the blood drenched creatures sickeningly squelch and slop their way around convincingly. The only let down is the poor lip synching and script, which reminds me too much of the original Resident Evil‘s opening section and not in the charming way that everyone celebrates today.

The cinematic quality of The Evil Within is staggering. This is where the game really shines through and shows what the PS4 can do in ways that have only been touched upon in previous games. The visuals are clear and really set a scene amongst the desolation and decay of the world. While there is a lack of believable particles and finer details it more than makes up with the sheer grotesqueness on display here. There is more blood in this game than an Evil Dead sequel and the intricacies and animations of the beasts in the game are brilliantly realised. From the low level haunted enemies which make up the fodder of the experience, to the large twisted Grudge-esque monsters that chase you through the corridors, knocking over obstacles in their path which you previously hoped would slow them down only a moment before. The grim creatures fit well into the gothic grey aesthetics of the urban environments and when the scene’s change to lighter tones in the form of sun drenched fields of sunflowers there is a coating of eeriness that is palpable. The awful thing I could do without is the forced cinematic black bars that limit your viewing window, there is currently no way to remove them and they simply just get in the way.

Evil Within
7 Overall
Pros
+ Suitably atmospheric and well realised enemy creations + Satisfying combat which rewards risk + The story and cut scenes provide a decent level of intrigue
Cons
- Design issues which can make the game unfair and kill the fun. - Feels just like a nine year old game with little improvement - A bit too familiar for its own good. - Cinematic black bars needlessly eat up a lot of screen space.
Summary
The Evil Within is a good game that stands beneath the shadow of a nine year old predecessor that unfortunately still has yet to be bettered. Old school in nearly every sense it gives little reason for people to return to the world of survival horror. However the game is not a lost cause; with excellent set pieces, decent combat and an intriguing story behind it this game will likely appeal to those that enjoy horror or screaming into a webcam for views on Youtube.