From Fordesoft, which from the credits seems effectively like a one man team but with a bit of help here and there, comes Emerald Shores on PS4 (and cross buy with Vita and PS3). A platformer influenced by 8/16-bit classics but with added RPG elements sounds interesting but unfortunately it struggles with the basics. 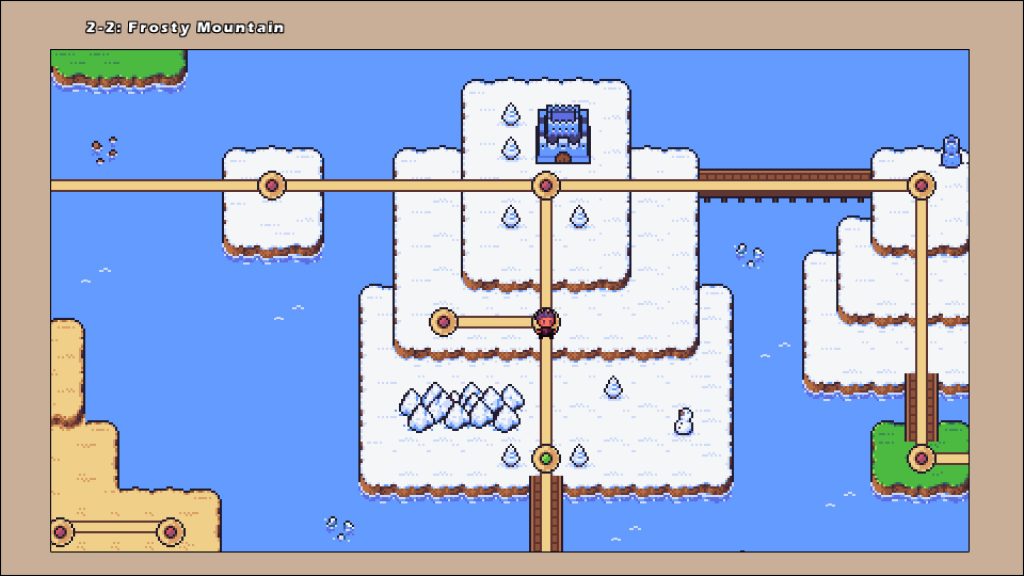 You play as Alex who receives a letter from King Jeff requesting his aid. Alex must make his way across a Mario 3/World style map to reach the Emerald Shores and save a race of rabbit-like folk. Why Alex? I don’t know, but Alex can kill things by jumping on their heads so he’s probably as useful as anyone.

As a platformer you can probably guess the basics. You move from left to right jumping over pits or spikes, over or onto enemies before reaching the chequered flag denoting the end of the level. A couple of things make this slightly different than you may be imagining however.

I mentioned RPG mechanics in the opening paragraph and how that manifests is quite interesting. When you kill an enemy you get experience and when you collect the coins littered around the levels you get one experience point for each, get enough and you level up, adding to your maximum health and making your head stomps do more damage. 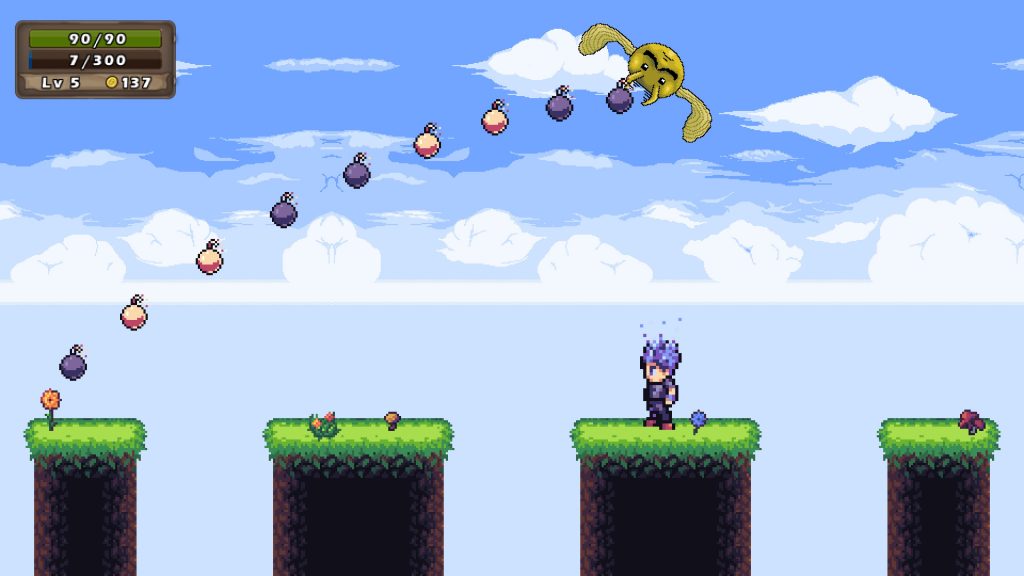 If that last part hasn’t made you think then I’ll tell you, enemies don’t generally die in one stomp on the head in this. Enemies have health and each stomp will take off a chunk of it, the higher your level the quicker things go down but otherwise you’ll be required to jump on even the most basic enemy’s heads multiple times to get the kill. You can make lots of individual jumps or try to continuously bounce on their heads but this is difficult as the bounce isn’t particularly predictable, shooting you off in random directions.

Obviously you can just jump over enemies and ignore them if you want but, although you can return to completed levels, you can’t gain experience in levels you have already completed. You can understand why that is, so you can’t grind out levels and become overpowered, but it does mean you could screw yourself over as the enemies get tougher if you have failed to level up your health sufficiently. A better solution would have been for the game to remember which enemies you had killed and which coins you had collected on your completion of the level and only blocking those off, but you’ll just have to be careful.

Random bounces off enemies heads aren’t the only control worries though as Emerald Shores only works on a very basic level. There’s nothing in the way of momentum, Alex doesn’t feel like he has weight to him and collision detection seems very suspect. I also had the rather odd occurrence of a moving platform becoming glued to my head dragging me out over a pit before dropping me. Considering you have to start from the beginning of the level each time you die random/broken stuff like that isn’t fun. Luckily the levels are rather short as is the game on the whole (three to five hours to do everything) so although it is frustrating it’s not like you’ll be losing hours of progress although you will have to re-kill each enemy by jumping on their head a million times to get any experience again. 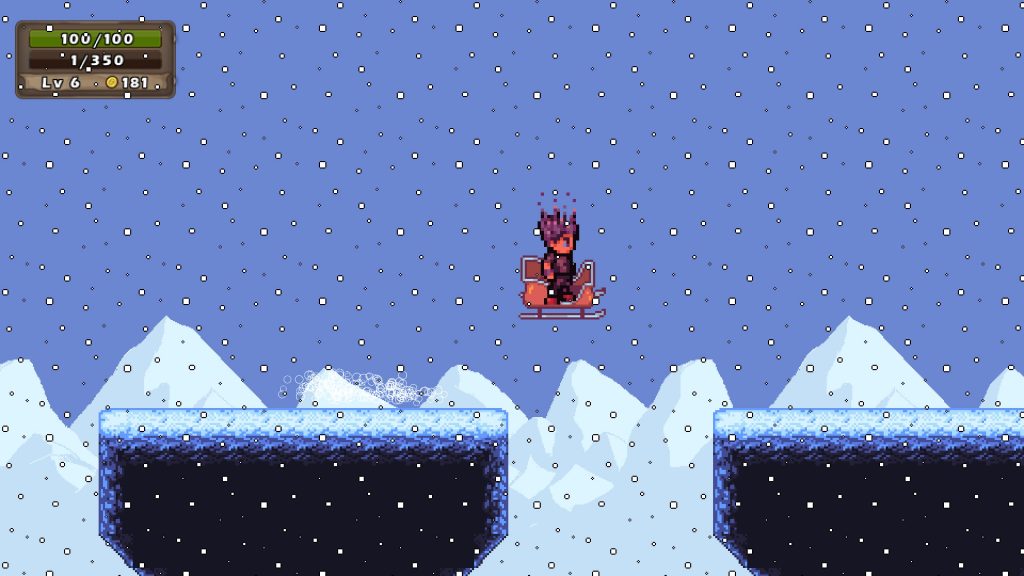 Fordesoft do try to add some variety by including a few different level types towards the end of the game and a couple of mini-games which is appreciated. One includes collecting hidden items throughout the levels (there are secret exits to most levels too) to train a creature to race for you, but I actually completed every race having only collected about a third of the items. A farming mini-game is a better distraction but it’s not that difficult so you’ll probably get the reward for playing it first time and never play it again after that.

To add more replayability there is a Remix mode which has you play through the game again but the level make up is slightly different. It’s not really different enough to be a must play though, the main reason for doing so is to get a trophy.

The presentation is severely lacking. The visuals are purposefully lo-fi, but they’re incredibly inconsistent. There is a mummy boss that actually looks very good, whilst the majority of other enemies are very poorly drawn. Similarly the music is generally poor with repetitive, basic strumming. 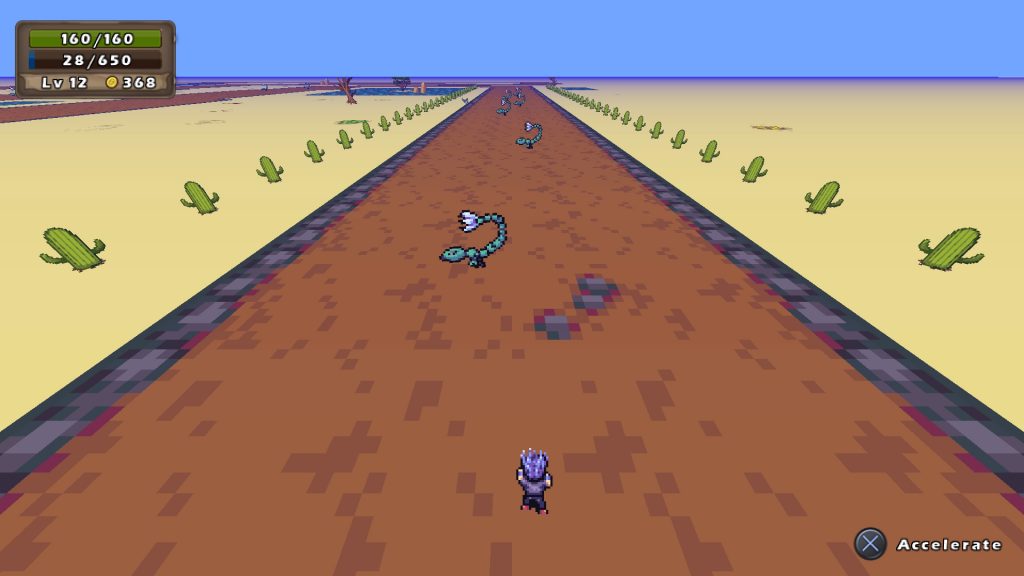 All in all I can’t recommend Emerald Shores even for the low price of £9. It actually reminded me of Cast of the Seven Godsends, a game that got us blacklisted by the developer after my review, but I think I’d actually prefer to play that though it is a close run thing. Both have obvious inspirations and both miss the mark by quite a margin. Emerald Shores feels like a free game you could play in your web browser and not a great one at that.

Emerald Shores
3 Overall
Pros
+ Levelling is an interesting twist
+ Mini-games add some variety
Cons
- Controls are bad
- Sound and visuals are bad
- Levelling mechanic actually gets in the way
Summary
Emerald Shores has the interesting idea of adding RPG style levelling to a platformer. Unfortunately in practice this is far less fun that it may sound and even the basic controls leave a lot to be desired.