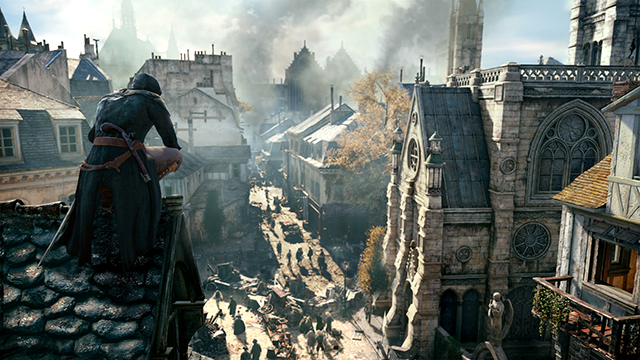 With the latest instalment in the Assassin’s Creed franchise out this week, Paul sits down for a chat with Assassin’s Creed Unity’s Audio Director, Steven Dumont – the man responsible for leading the team tasked with the challenge of re-creating the sounds of 18th century Paris.

Hi Steven. Can you tell us a little bit about your background and how you came to be involved with the games industry and the Assassin’s Creed franchise?

As a kid I was really crazy about videogames. I played and owned about every game and console that existed and I especially liked the music. I remember recording all the best tunes from my Nintendo and Amiga 500 and doing kind of DJ mixes with them. I would listen to that all day long while most of the other kids would listen to the latest pop radio hits.

My passion for electronic music got me into producing and I released two albums for a Montreal techno label called Hybrid Structure. It was after meeting a guy while DJing at a party who really liked my music and happened to work for Ubisoft as a sound designer that I brought my resume to the company and got hired right away. For more than ten years now I’ve been working in the audio department for Ubisoft. I moved up the ladder throughout a number of games, starting with Myst 4 and Far Cry through to Naruto, Avatar and others before finally landing a role on the Assassin’s Creed franchise on Assassin’s Creed 3 as an Audio Director. 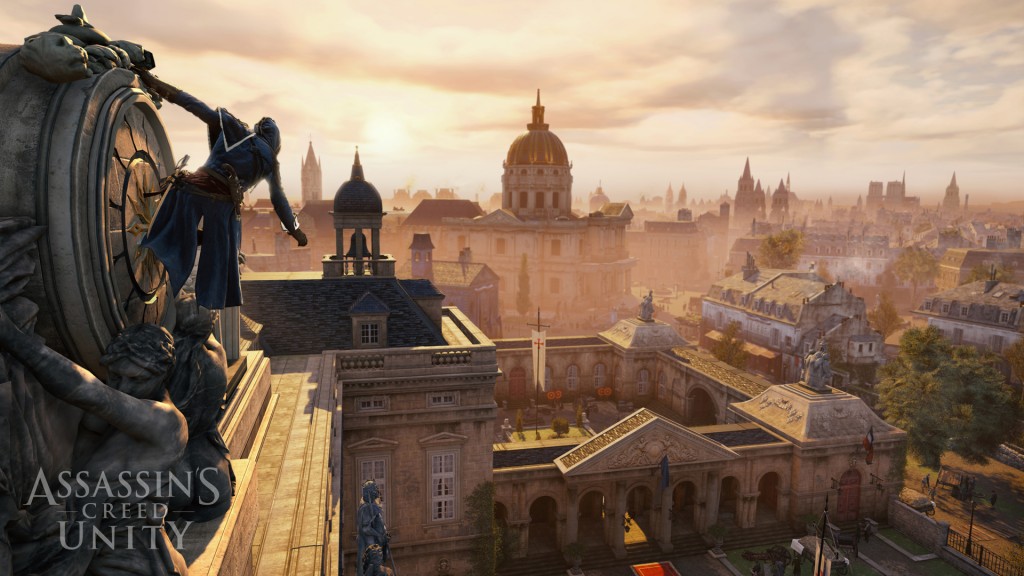 The Assassin’s Creed series merges traditional sounds and instrumentation with modern technology. How do you set about striking that balance between old and new to reflect the time period in which the games are based?

The game is so rich visually that most of the time that balance comes directly from the story and the different phases of gameplay of the game. The modern technology sounds are the easiest and fun part I would say, because we can really be creative and push the sound design to the next level.

With Unity, we decided to spend more time and effort working that balance also within the music score. It’s done in a very subtle way, mixing styles of music from that specific time period with a more modern electronic score. It really creates something unique and fresh that is not the typical videogame score we use to hear all the time. To achieve this, we worked with three different composers each with their own set of skills and style. Really, the challenge was to make all three cohesive and seamless like it’s all coming from the same source.

Not including the likes of scoring and voice acting, how long does the recording process generally take on a game as large in scope as Assassin’s Creed Unity?

It’s a little difficult to say because it’s spread throughout production, which lasted about three years or more, if I count the conception phase. We also normally benefit from a lot of recordings done on the previous games, like footsteps, combat assets, some game mechanics and other stuff.

This game was a bit different – we knew we wanted something new and fresh and we decided to re-record almost everything for the new generation of consoles, but also because it will serve as the new foundation of the next Assassin Creed title. 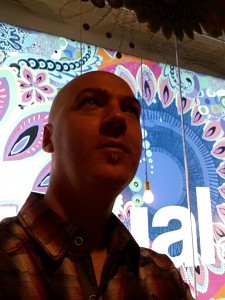 This is probably a slightly obvious question, but at what stage in the game’s development are the audio department generally brought in to start designing the game’s soundscape?

The first members joining the audio team are normally brought in around the pre-production phase when the team is starting to build the first playable section of the game to showcase to the editorial. The Audio Director with an audio artist and one or two sound designers are the first people to start. That milestone is very important because it is only if we pass that gate that the rest of the resources can join the project for the real production phase and for Unity, that was around two years before the end. Most of the team members join the project when we start the production and we sometimes add a few more people near the end to be able to close the project.

How do you set about creating the sound of the game world, ensuring that it’s authentic to the time period that’s being represented?

We were very lucky to be able to attend history classes and we have access to tons of documentation and references from the period in which the game is taking place. Who were the important composers? What music did they compose on which instruments? With all this research done early on in the project, it really helped us when the time came to find and record the live music we needed for the musicians playing music in Paris. 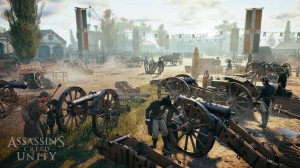 What are some of the greatest challenges about the Assassin’s Creed franchise from an audio perspective?

The scope is always the main challenge when doing triple-A titles, especially the Assassin’s Creed games, because they are so big and there’s so much side content in there. Also, since there is a lot of systemic gameplay, their sounds need to be well designed and not too repetitive, otherwise you can cause hearing fatigue for the player. The music is also a nice challenge as there are so many different ways the player can do things in the world and the music needs the reflect the way they play.

Gaming is obviously very different to the likes of film and television, which are much more linear in terms of the way the user experiences audio. With responsive environments and free roaming, it’s likely that most players will have very different experiences from one another. How daunting is this from an audio perspective?

We are getting used to it because that is what audio in video games is all about. That’s its strength, but it can also be its weakness if not done properly. I guess it goes with experience. Like I mentioned previously, I think that the most difficult aspect is really the music. We try to create as many systemic audio designs that can work from any distance, perspective or intention, but it is a lot more challenging with the music because of the melodic content and transitions needed between the different cues. With more than five hours of music total in the game, Unity is the most ambitious Assassin’s Creed game we worked on in terms of scope. 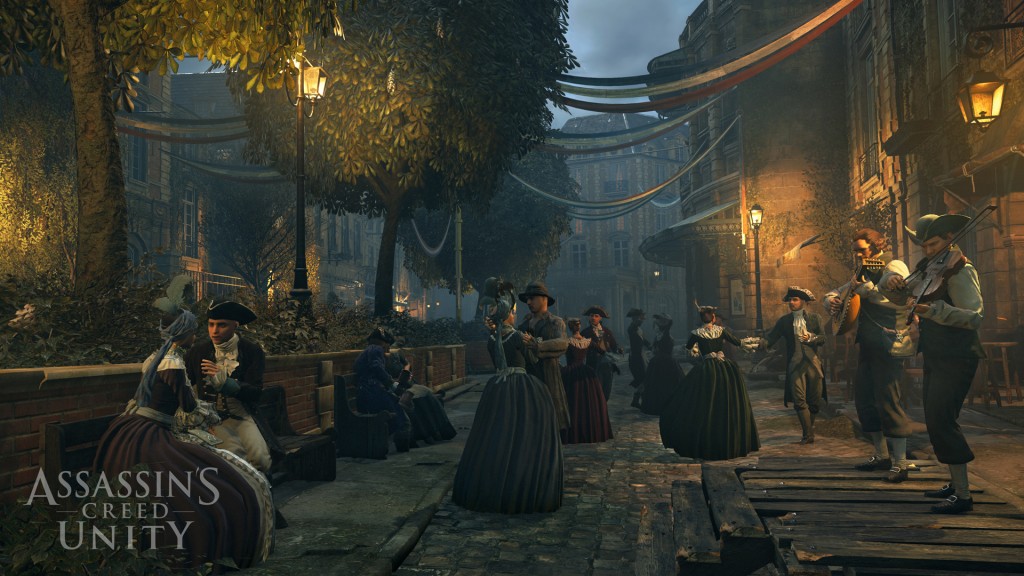 How much freedom do you have on a game that’s part of a franchise like this? You’re crafting a sound that has to be unique but ultimately sound like it’s part of the overarching Assassin’s Creed series, I guess?

There will always be sections and elements of the brand that are a bit more difficult to change, like the hidden blade sounds when assassinating targets, the eagle cry when you do a leap of faith or detection loop feedback sound effects when you get detected or returning to anonymous. These are the foundation of the game and have become iconic sounds for the brand, so they are a bit more difficult to change but for the rest we have a lot of freedom in what we do. That’s why the new games are always pushing more and adding new stuff to the experience.

Over the course of the past decade video games have increasingly started to emulate blockbuster films, both through score and through sound effects. What are your thoughts on this?

With games being more and more cinematic I think it’s normal that the audio experience is following this. With the arrival of every new generation of console we can push the quantity and quality of our assets and make it a better experience for the player. At the same time, our medium allows us to be more creative and come up with things that just cannot be experienced in cinema.

What are some of the most exciting moments we can look forward to in Unity in terms of audio, in your opinion?

Walking in the streets of Paris during the French Revolution and hearing the people reacting to their surroundings is pretty cool. The city is so rich and dynamic and there is so much stuff to see and hear that there is never a dull moment. There is always something new to listen to. It can be some people arguing or rioting, others humming a cool song they have heard somewhere in the game, Gregorian chants near a church or one of the many street musicians playing their favourite instruments.