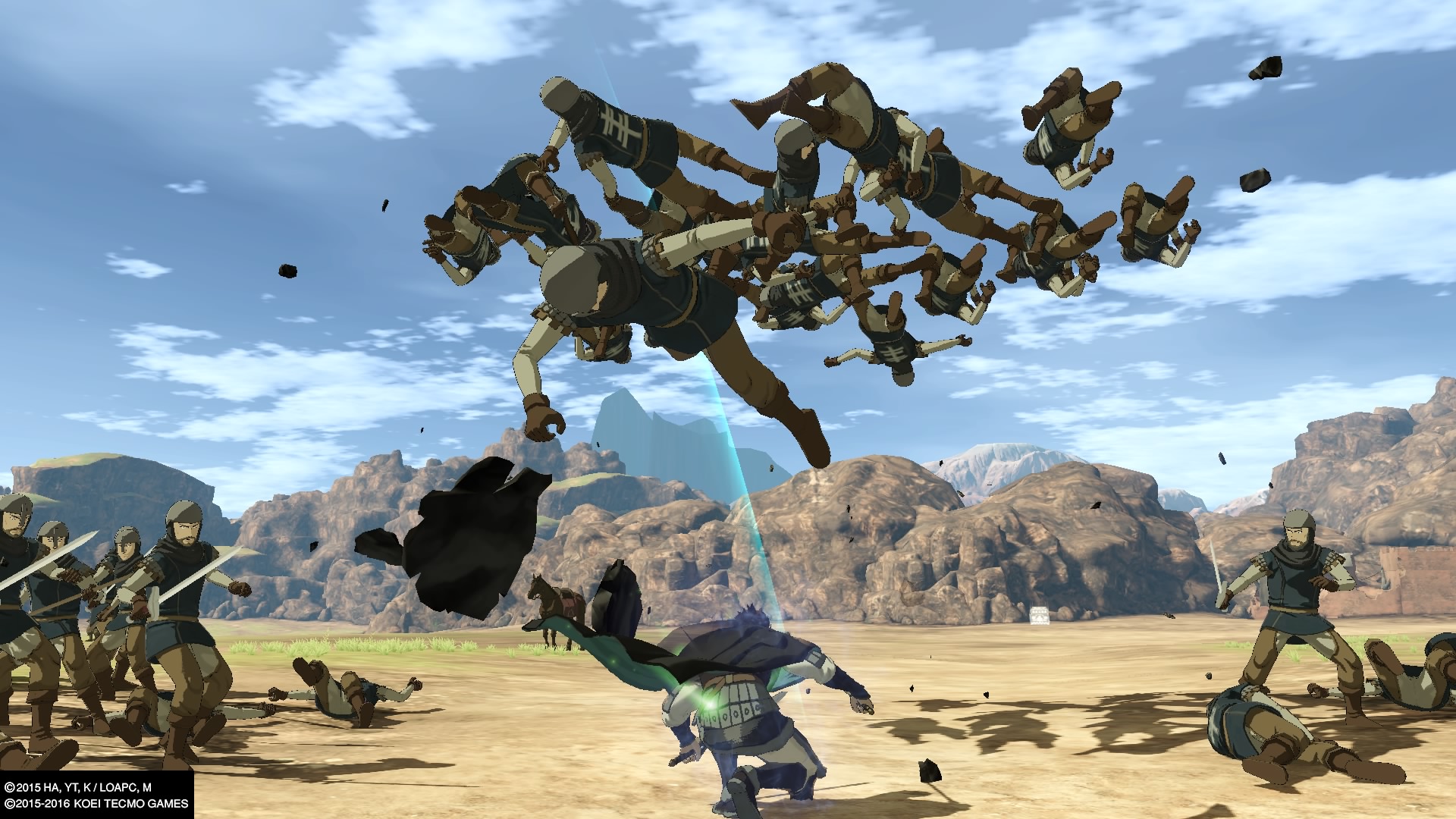 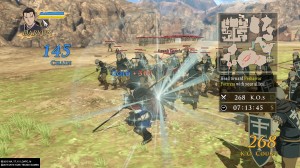 Arslan: The Warriors of Legend is a new Musou game (Dynasty Warriors et al) based on the anime adaptation of The Heroic Legend of Arslan. If you’ve never played a Dynasty Warriors game or spin off before they are pretty unique, except for the fact that there are about a million of them.

As this is based on an anime the story presentation is a step up from the usual Dynasty Warriors fare, with anime cutscenes with full Japanese dialogue with subtitles. These can go on for a while and weirdly don’t contain a whole lot of animation. There are a lot of still frames with just mouths moving or camera pans and even when there is movement on screen it’s depicted with cross fades between key frames, without any frames in between. It’s a little jarring and would make sense if the anime did this but it doesn’t, so I’m not sure if it’s a budget thing or file size thing. You do get used to it and the story is actually pretty good.

The titular Arslan is a timid, young prince who recruits a colourful group of characters when his home is invaded by a neighbouring city of religious fanatics in the hope of claiming back the throne. The story certainly goes places including treachery and double crosses, but all with a light hearted anime slant. The range of different characters suits the Musou template although quite a few end up with swords/bows which does negate the variety a little, though they do all have different looking combos.

Gameplay is very familiar in that you control one character who can do light and heavy attacks, but unlike in your usual action character games you can take out tens of enemies with one swing. Other than enemies with names (‘Generals’, or even proper characters) all the enemies are fodder, there to just get knocked flying with one slash of your sword. It is kind of ridiculous but still looks pretty cool to this day. If you’ve got multiple weapons unlocked you can ‘chain strike’ between them to keep a combo going and you build up a super meter to unleash a screen clearing attack to knock hundreds of enemies flying instead of just tens. It’s a power fantasy and it works. 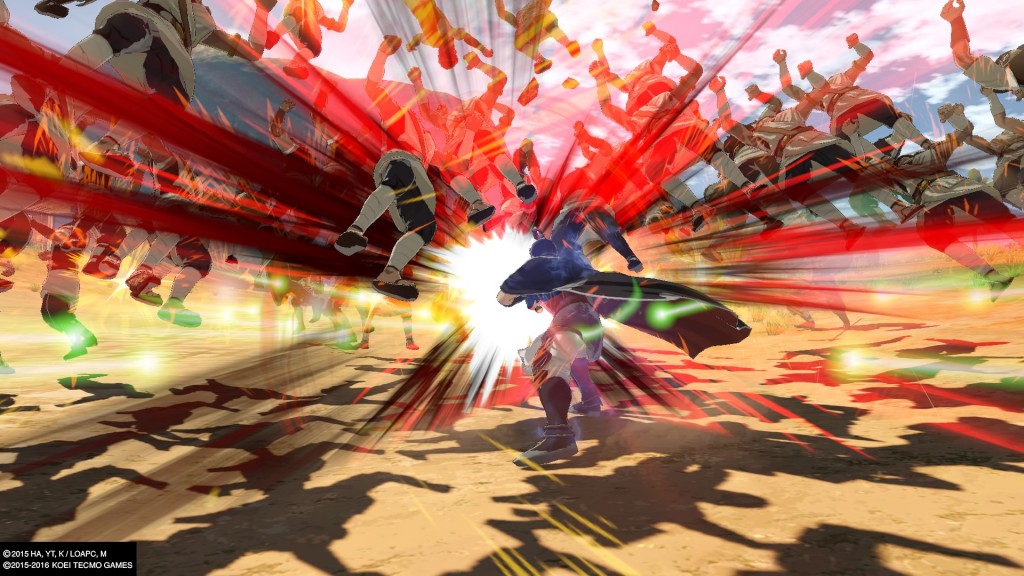 As the goal of the game is to just wreck fools the technicality of a Bayonetta or Devil May Cry is missing here, which generally doesn’t matter but when you want to defeat a boss simply keeping them on screen can be a chore. The game puts an arrow on screen to point where they’ve gone but it’s not as good as a basic lock on system. You do have the ability to block and dodge roll but, at least on lower difficulties, you’ll rarely need to use them.

You are on a rather large battle field and different objectives are given to you which usually boil down to killing a specific person to allow progression or reaching a destination. You are graded on time and sometimes the amount of enemies killed so there is a reason to replay levels if you want to go for the S rank. At set points a cone will appear on the map and if you enter into it you can perform a ‘Mardan Rush’ which basically results in a group of infantry attacking, either on foot, horseback or with arrows. You can use it to take out lots of enemies but you usually just have to destroy a barricade to clear a path. It can look pretty cool seeing loads of horses stampeding across the battlefield even if it requires little skill.

There is a card system where you can equip three cards to grant bonuses and a cooking element where you can cook a health/attack/exp boosting meal before entering a battle in free mode. These are all nice little additions but if you’re not a fan of Dynasty Warriors’ basic gameplay loop then Arslan doesn’t add enough to change that. Similarly, even on the PS4 having so many characters on screen means that they draw in closer than would be acceptable in most games although I didn’t have much trouble in the way of slow down. The graphics are cel shaded to give that anime look and although not stunning is certainly serviceable.

There is an online mode for two players to play through the levels together and also a split screen mode if that’s your thing. Although there are plenty of levels in the story mode and free mode even adds extras this is a little light on options compared to other Musou games although I actually think there’s enough, even if a little variety would have helped. 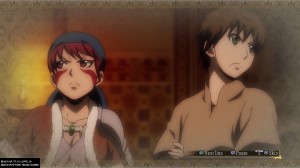 If you like Arslan, then you will probably get a kick out of playing as your favourite characters. If you like Dynasty Warriors then the story may add something for you but the lack of extra game modes beyond the basic story and free mode may be off putting and if you’re never heard of either then if tapping out a few simple combos to kill thousands of enemies in one level with a decent story to back it up sounds like fun to you then you might just get a kick out of this.

Arslan: The Warriors of Legend
7 Overall
Pros
+ Great story, well presented + Good variety in characters + Knocking fools flying is still fun
Cons
- Gameplay loop is the same as always - Anime cutscenes can go on a while - Lack of game modes
Summary
If you like the Dynasty Warrior games then Arslan: The Warriors of Legend is a good one of those. The story is decent and well presented, the character variety is strong and the feeling of knocking hundreds of enemies into the air with one attack is as appealing as ever. There aren't that many game modes however and if you're not a fan of the template then this is going to do little to change your mind.