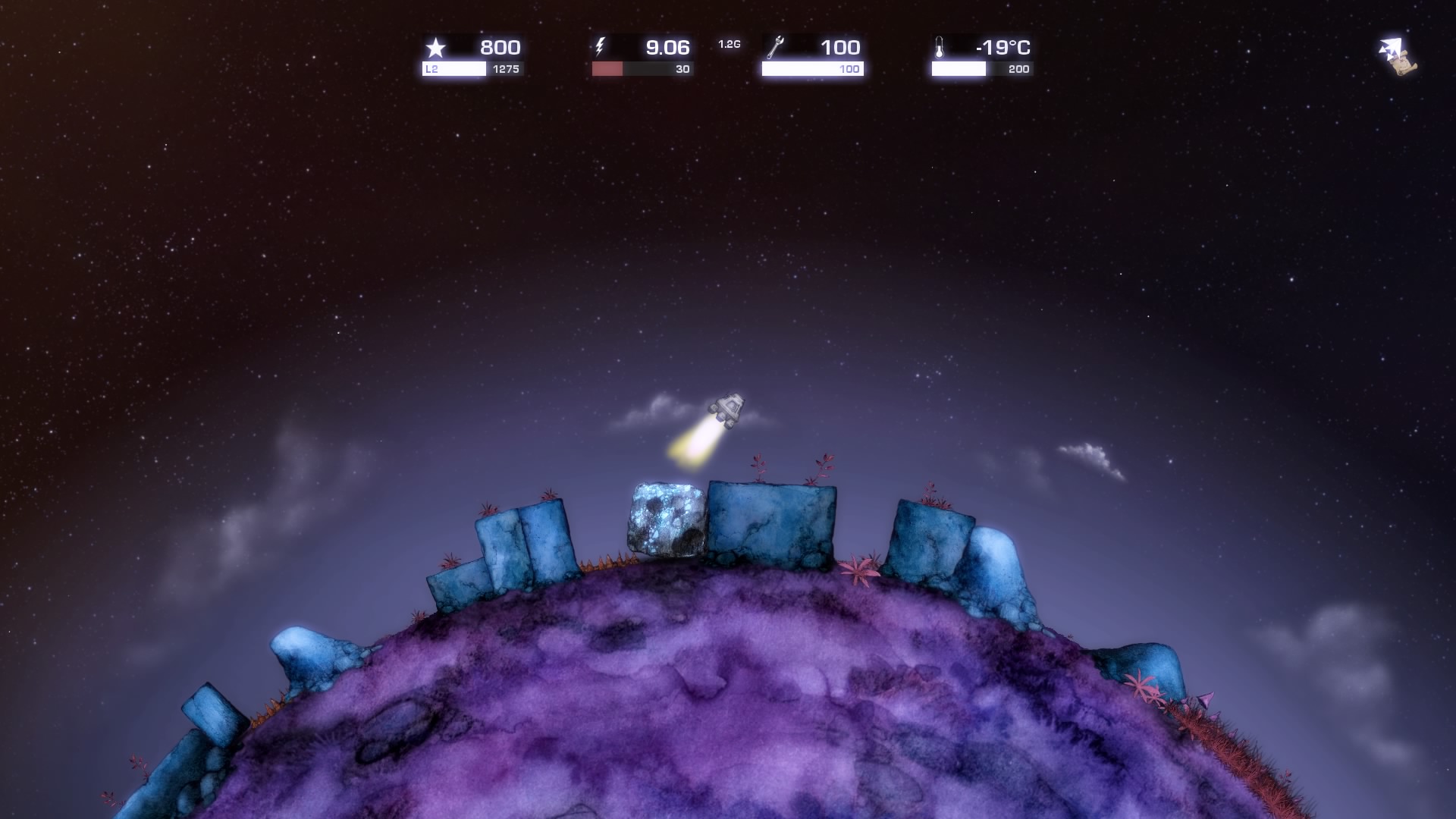 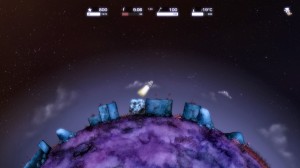 When I was in school, some years ago now, we had a suite of computers and installed on these were two games.  One was the demo version of Zarch which I spent many a school hour on.  The other was the more educational one which saw you experimenting with the moons orbit round earth, allowing you to place the moon and set it’s direction of travel to see if this would still orbit round Earth.

Amazing Discoveries In Outer Space, (ADIOS), sort of brings to mind these two games of my youth.  You control a small spaceship stranded light years from your home which has just suffered damage taking some of it’s main features offline.  In order to get back to your home you need to power up your Z Drive and travel to the next nearest solar system on your way home.  In order to power up your Z Drive you need to make discoveries, which basically involves flying close by things, each discovery giving you more fuel to play with.  It’s a very simple concept in principle.

Controlling your spaceship is different to many things you would have played before as gravity plays a massive part in this game.  Everything is controlled through the use of your main thrusters.   Once you’ve blasted off into open space you are represented by an abstract cursor, and the solar system is shown a map highlighting orbital paths.   Once in this view there will be a line extending from your position tracking the parabolic trajectory you will take around the solar system.  Applying thrust in the opposite direction to the way you are travelling will change this parabolic path.  What this means in principle is that it’s not just a case of pointing your ship at the nearest planet and flying straight there as you need to take into account all manner of factors which would affect your trajectory.   This makes flying through the solar system challenging. 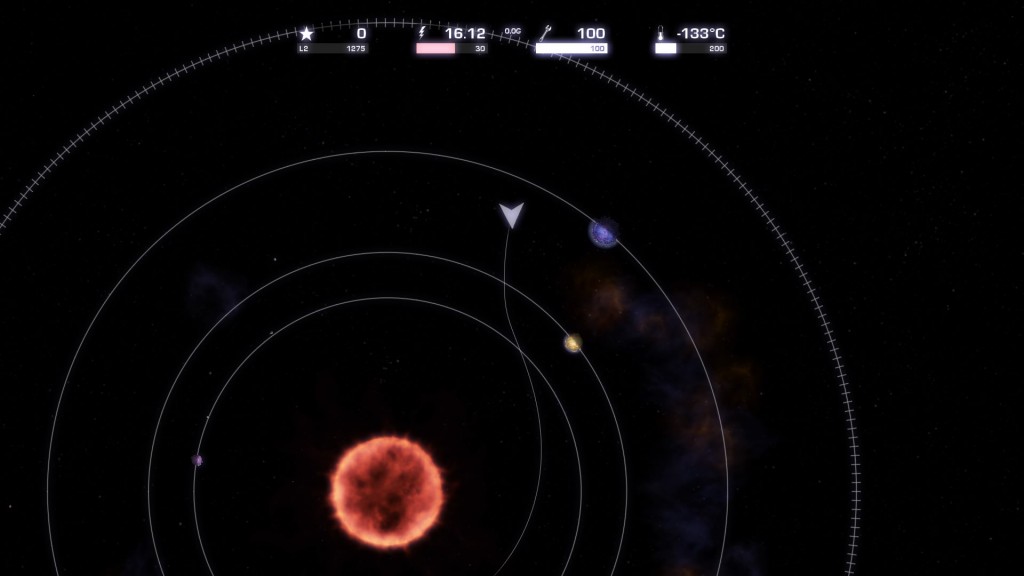 Once on a planet you can leave your space craft and go in search of objects to provide you with fuel for further space flight.  Each planet has a day and night side, a rotational speed and it’s own gravity to contend with.  This means you never know what you will experience when you go exploring.  On planets with low gravity the simple act of jumping can prove deadly if not thought through fully.  Exploring planets is never a walk in the park when you consider the risks of asteroid collision, spike pits, deadly winds and aliens.

Underpinning the whole game is a very tight resource management aspect.  Your ship and your pilot share the same resource for health and fuel, and this is easily wasted through injury or through the application of thrust to change your trajectory in space.  In space you can easily burn through most of your fuel in an effort to alter your trajectory, and then badly misjudge your velocity and slam into a planet taking a huge amount of damage in the process.  Unfortunately the control scheme forces you to play the game at a slow pace and coupled with the prospect of instant death this can result in hours being wasted with no real progress.  This whole process of adjusting your trajectory is both infuriating and interesting.  It’s a control scheme which forces the player to consider their moves, and rash decisions often prove costly given the tight resource management constraints. 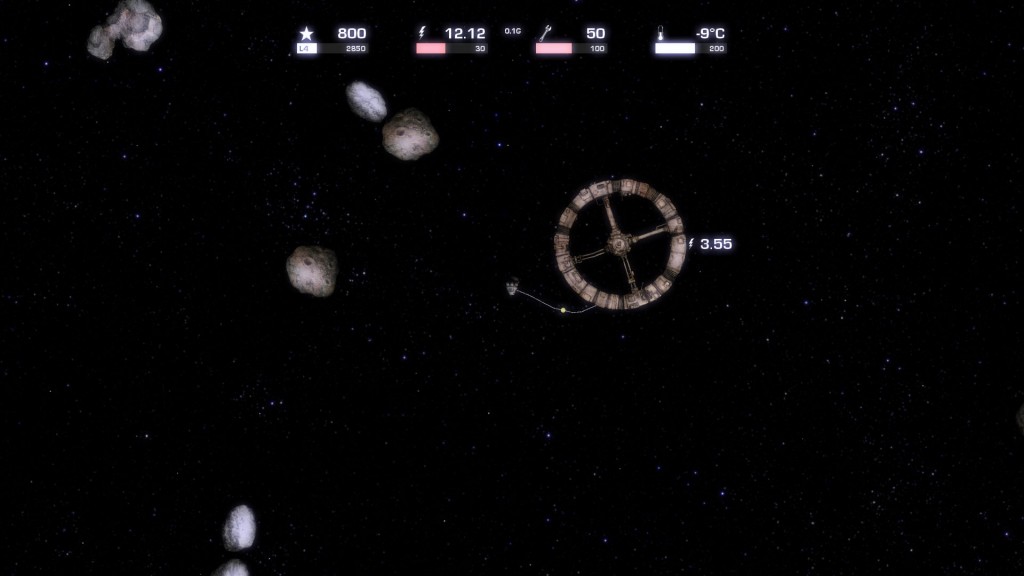 The difficulty here can’t be understated.  The game presents itself in a kind of darkly humours way, with the ships on board computer being cut from the same cloth as Glados from Portal.  You also encounter cute looking aliens, get to wear fancy hats and its all presented in a kind of cute cartoony style.  As such this presentation suggests a game which will be both arcadey and relatively easy to play.  But what you get here is something which is almost simulator like in it’s rule set, and something which is very challenging.  You will die here, and frequently.  You will crash into a planet or an asteroid, run out of fuel, burn up in the sun, die in a spike pit or jump out of planetary orbit. 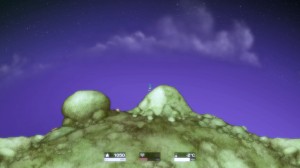 ADIOS isn’t the most enjoyable game to play, it’s too frustrating for that, but it does have that go back for one more try hook to it.  The idea is a good one, and the presentation of the solar systems and orbital paths is beguiling in a sciencey kind of way.  However the adherence to the rules of thrust and gravity make this game too difficult to enjoy fully.  I’m sure there are some amazing discoveries to be found in outer space, but I’m not sure I want to go through the effort of finding them.

Amazing Discoveries In Outerspace - PS4 Review
5 Overall
Pros
+ nice idea + the scientific way the space flight is displayed is great
Cons
- the visuals and style hide what is a difficult game - difficult control scheme involving thrust and trajectories - frustrating in that instant death sometimes feels out of your control
Summary
This is a game of space discovery and the science behind it is great. However it is crushingly difficult to both control and survive. Whilst i'm sure there are amazing discoveries to be found in space, you wont find any in this game.