And so continues Eastasiasoft’s prolific run of shoot ’em ups!  Zero Strain is their latest offering and while it has similarities with their recent releases, it also feels like something of a step up.  In recent months they’ve put out a series of vertically-scrolling shooters but this one is different.  It looks like a twin-stick shooter but it isn’t (even though at times you’ll wish it was).

This game is an arena shooter of sorts.  The levels come in three flavours.  Descent levels see you clearing out small areas full of enemies and Boss levels have you facing off against a single, larger enemy.  These two level types alternate but are occasionally punctuated with Protect levels where you have to defend a target from waves of enemies. 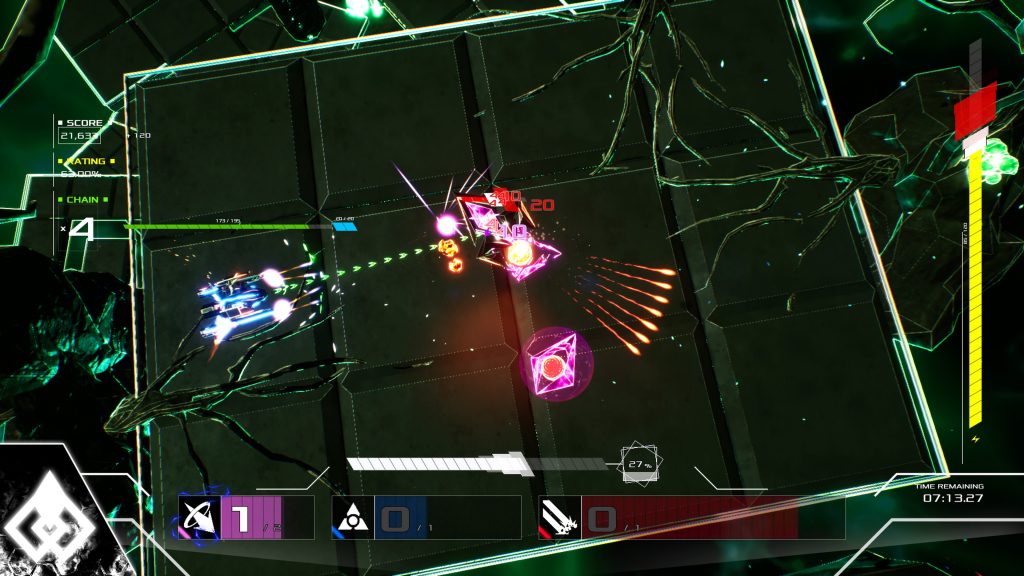 The controls are a little strange though.  Viewed from above, you’d expect to aim with the right stick but instead you fire with the

button and you auto-lock onto the nearest target.  Between that and your ship’s inertia, initially the game feels very odd and a little bit messy to play with you skating around and facing the wrong direction half the time.

Eventually though it starts to make sense.  The lock-on thing works and introduces a degree of risk and danger as you need to get a bit closer to your enemies.  You’ll also need to pick up the energy cells that defeated enemies drop as this will allow you to use your three special weapons which are accessed by hitting

and one of the three bottom face buttons.  On top of that you’ll need to manage your energy which is depleted whenever you shoot your main gun or dodge (using 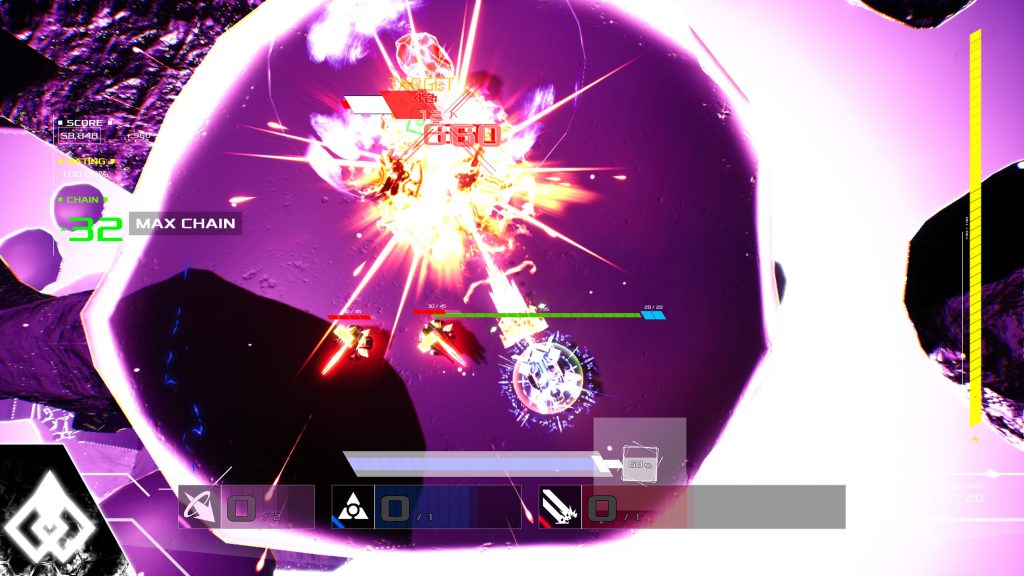 It’s a fairly simple basic gameplay mechanic but Zero Strain keeps things interesting by allowing you to unlock new ships and, much later on, upgrades.  The way this works is that when you beat a level, you’ll pick up a light cell.  These are used to unlock the next level but pretty quickly you’ll realise that you need to replay levels to get enough cells.  However, you only earn these if you beat a level with a new ship and those are unlocked by picking up components in the boss levels.  This has the effect of gatekeeping levels a little and while at first this works well, it gets annoying when the next level is ten cells away and you’ve got to replay a bunch of earlier levels with all your ships, especially as only two of the ships are really good and the rest are a bit compromised.

However, the variety this creates does keep you playing and it is quite addictive.  The only problem is that it’s all a bit thin, we’d have liked either a more in-depth upgrading system or more variety in the levels but for a cheap shooter we can’t complain too much and we had fun working through it for the most part.  That said, the incentive to keep going isn’t great.  Being an Eastasiasoft game, you’ll have earned the platinum trophy an hour in and with no leaderboards, the only reason to keep on playing is to see the next level but these are all much the same. 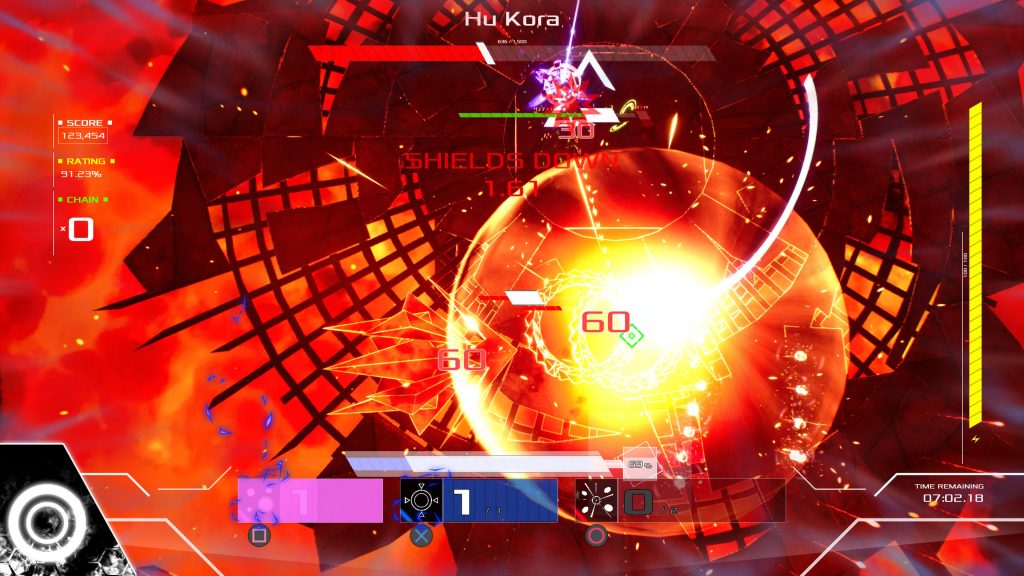 Another issue is the difficulty.  Zero Strain does eventually get quite taxing thanks to some shielded enemies that need to be dodged through, the sheer number of foes that can show up in one area and the fairly manic visuals but it takes a while to get to that stage.  For the first couple of hours of play I wondered if it was even possible to die.  That speaks to a slightly misjudged difficulty curve but when the challenge kicked in, we found ourselves more engaged with the game.

The presentation is better than you’d expect from a one-man developer.  The visuals are bright and bold with a great neo-retro look.  It’s not all flat 2D either, even though it plays on a flat plane.   The only problem is that it can all get a bit confusing and messy.  This isn’t a problem most of the time as you can absorb a lot of damage so a few stray bullets aren’t going to end your game but when you combine it with the game’s lock-on system, it doesn’t foster the sort of precise gameplay that we like from top-down shooters. 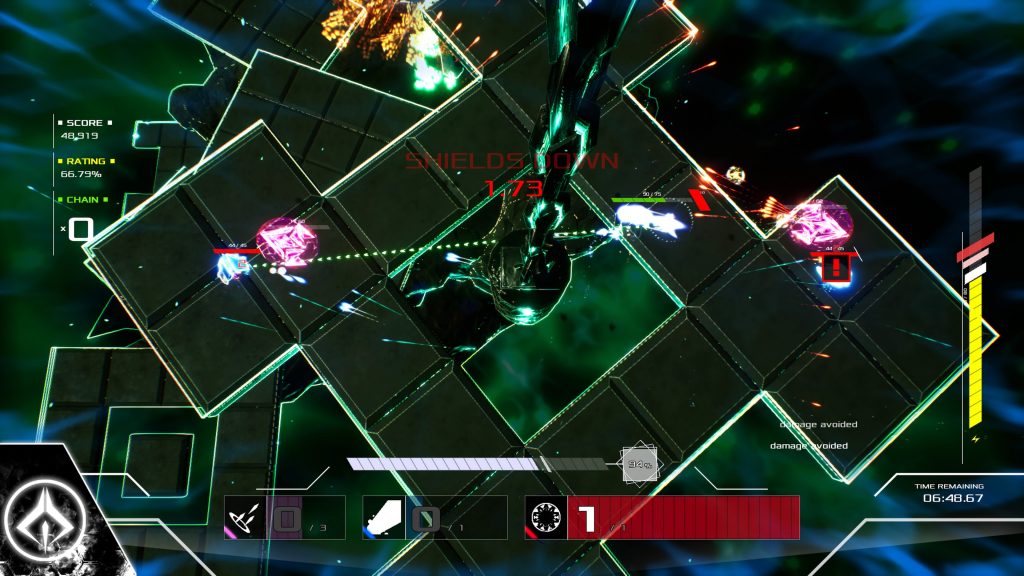 The sound is also a bit of a mess too with an electronic soundtrack that’s a little hyper but also drowned out by a truckload of sound effects.  Our advice is just to embrace the chaos though, or just turn the music off.

With all that said, Zero Strain is a good game and a bit of a bargain.  It’s probably the most polished of the Eastasiasoft shoot ’em ups and we respect the fact that it is so different to everything else in the genre.  Not using the right stick makes it feel like it could have been a Dreamcast game and we sort of like that.  Actually, that said, you can aim with the right stick but given that you fire with the

button and only have one right thumb, you won’t be doing that.  But anyway, there is a uniqueness here that we like.

Review 0
7 Overall
Pros
+ Unique shoot 'em up gameplay
+ Different ships give some good variation
+ Eventually provides a good challenge
+ Quite good presentation
Cons
- Difficulty curve is off
- Controls can feel weird for a while
- A bit messy visually at times
- Requires a lot of replaying early levels
Summary
Zero Strain offers up a unique take on the top-down shoot 'em up genre and has a few good ideas. There are some niggles but they don't detract too much from this likeable and addictive shooter.