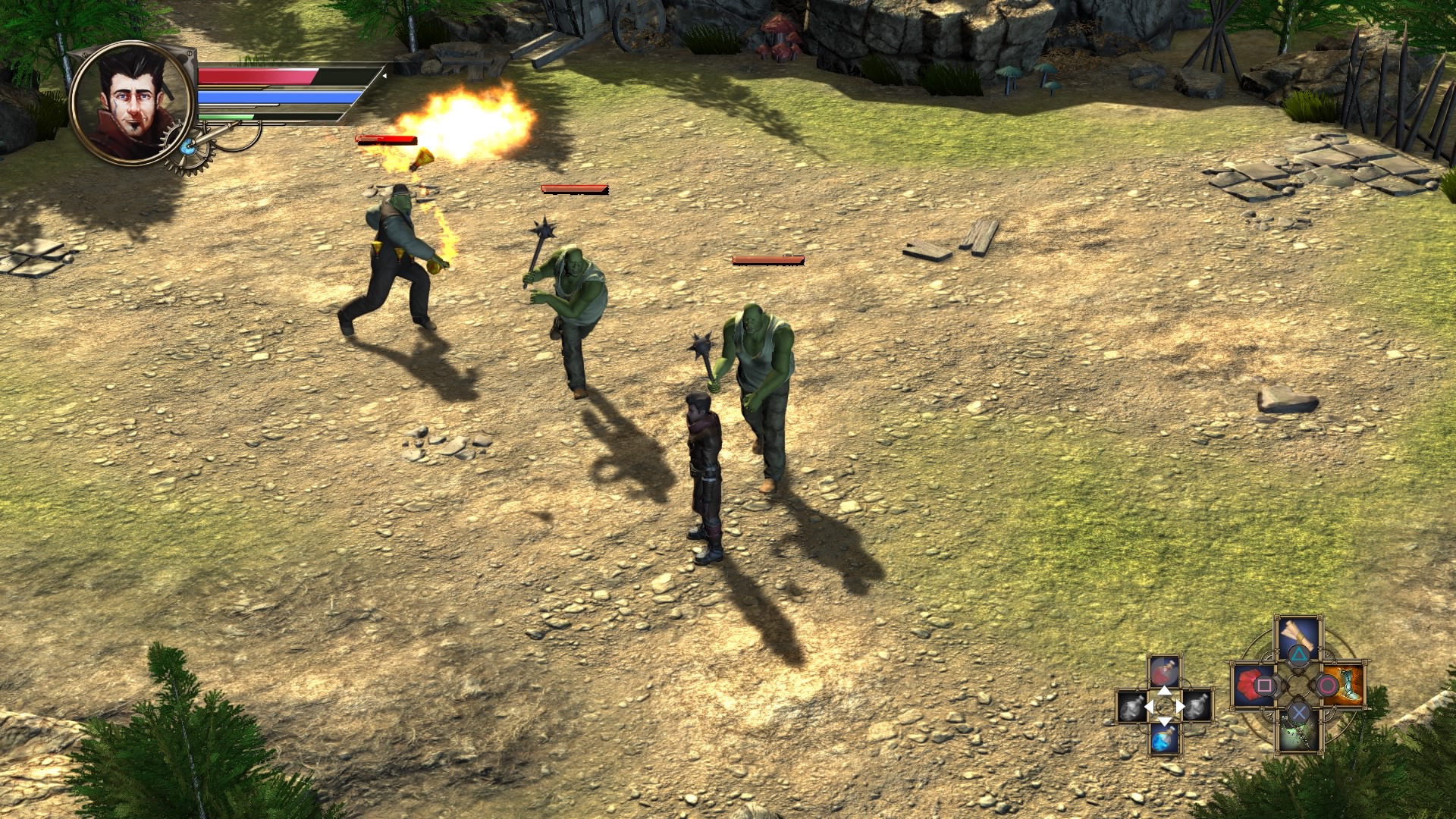 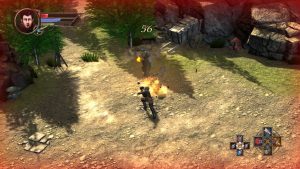 Zenith bills itself as a ‘comedy role-playing game’ which is an incredible stretch of the truth right from the off. The title, which appears to be a first for developers Infinigon, sees you take control of Argus, a would-be hero in a fantasy realm beset by a great evil that he must defeat. The plot is pretty basic and is largely undone with the absolutely shocking dialogue that blights the game from the off.

You know how teenagers think it’s fun to swear? Like it’s cool and makes them think they’re the big man. Zenith is that teenager. However, it is that teenager with a low IQ so while it has a wide range of swear words at its disposable, the rest of the writing leaves a lot to be desired. It simply is very, very bad. It’s quite jarring because it just doesn’t fit the setting.

Sure, Grand Theft Auto can get away with it – whether that’s because of the setting or because we’ve come to expect it – but it isn’t the case for fantasy games. The genre just isn’t synonymous with swearing and general bad language. It could be but instead it’s just overused and really, really cheesy.

Which is also how I would describe the writing. It’s just really, really hammy. The comedy is tethered to the aforementioned swearing or to pop culture references, a well that runs dry well inside the first hour or two. There are a couple of moments that made me chuckle but I quite literally mean a couple. The character’s lack depth, everyone seems to be incredibly whiny and it’s like the cast view the whole adventure as a massive inconvenience. Overall, the writing is incredibly forced and the attempts at comedy generally harm the game greatly.

When you’re not frowning at the dialogue, you’ll be attempting to play the game. As a third-person role-playing game, Zenith does an exceedingly average job of letting you loose in its world. Argus moves around freely enough but things go downhill quickly. For a start, you’re limited to a handful of physical weapons, none of which are particularly fun to play with. This is largely because there isn’t a lock-on so targeting enemies is down to your manual aiming. This isn’t a large problem with physical weapons but using spells becomes very hit and miss. I get that not all games have a lock-on feature but this title could certainly do with one.
Generally speaking, the combat isn’t much fun. The enemy AI defaults to one of two states, either running at you to hit you or throwing ranged attacks at you whilst standing still. There are no tactics or change-up to speak of,  it’s a total bum rush. 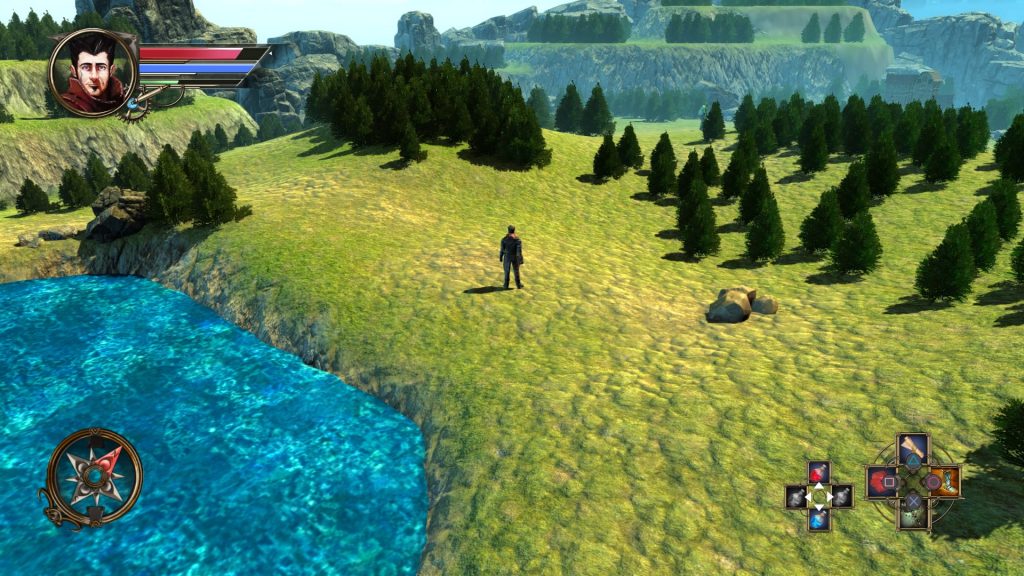 Combat boils down to whoever can cause the most damage first, which sounds like it makes sense but it really doesn’t. You have the option to roll out the way or use a shield to avoid damage. However, because you can’t attack whilst doing either action and because the AI only has two modes, both defensive actions are largely pointless, unless your stalling for time to use potions. Potions come in two forms; health and magic, but both have ridiculous cooldowns that last in the region of 30-40seconds. It’s frankly nuts that the game throws you so many potions, a really bad defensive system and then restricts you from using the potions.

On a basic level, the combat works but for a role-playing game it’s just so terribly basic. It works on a fundamental level; I can’t fault it in that regard. There just isn’t a great deal to it, which is a real shame because I can see the makings of something resembling a decent game, but the basic premise hasn’t been built upon in any meaningful way.

That’s further showed off with the over-world map, which looks really, really dated. Your large character roams around, encountering enemy figures and initiating a battle. It’s a little jarring with the rest of the game but the main problem is that the combat is still fairly shallow. The game does come with some puzzle sections but these aren’t particularly taxing either. 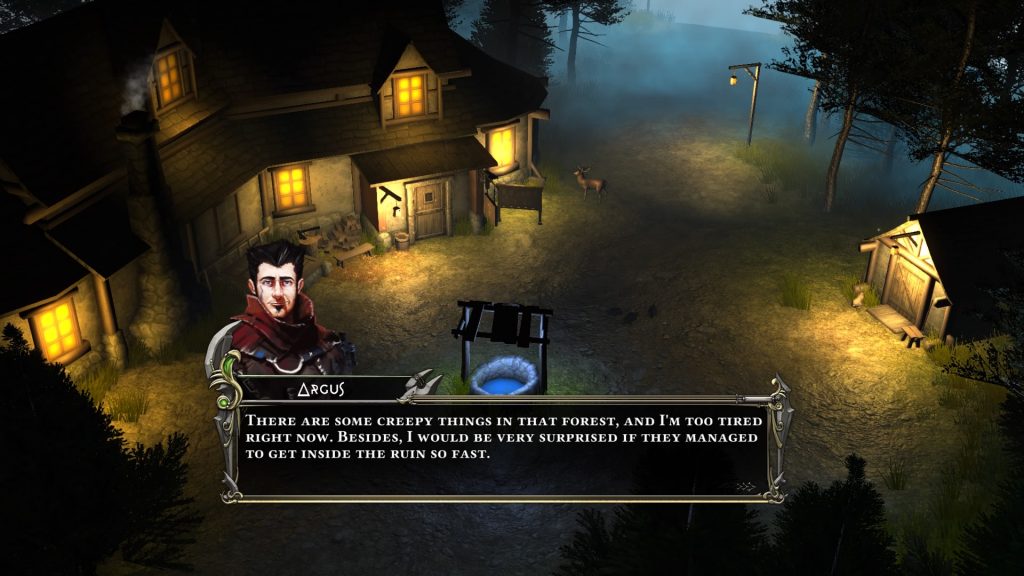 Graphically the game does claw a couple of points back because it does look alright for the most part. That over-world map is still quite ugly but when you’re in each level, there is a decent amount of variety present and the colour palette is pretty decent. Some of the effects on weapons and spells are also pretty well done, even if they are still a little basic. The only other strange element, graphically speaking, is the fact that some text boxes have a character model attached to them so that you know who is talking and some don’t. Furthermore, occasionally, the text appears outside boxes in a different font, colour and size. If it’s supposed to be funny, it isn’t and if it’s a bug, it should have been picked up.

Those points that Zenith clawed back are quickly lost with the audio which is a horrible bombardment on my ears. The music is repetitive and bland, making me want to mute the game within the first hour. Although there is no voice-acting, occasionally Argus will chirp up with a ‘sod off’ or some such nonsense which isn’t funny or interesting. It just seems quite out of place.

The final nail in the coffin for Zenith though, is the bugs and loading screens. The loading screens are pretty long, an unnecessary burden on a modern console. As and when you die, you can be waiting a whole thirty seconds to get back into the action. This is even more a kick in the teeth when you consider that bugs may force you to quit out of the game altogether. I think I have been fortunate to only have bugs that cause my character to disappear into the ground or strange colours to appear but I’ve heard problems elsewhere regarding game-crashing bugs. 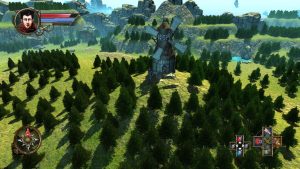 The sad fact about Zenith is that it is apparently made by a group with a combined thirty years’ game development experience and I would expect better from people with that level of experience. I think there is a game here but it is buried under so many bad attempts at comedy and stifling gameplay decisions. I can’t really recommend Zenith to anyone because it isn’t a good comedy game and it isn’t a good role-playing game. It’s just a game that needed a lot more love and a lot more time in QA.

Zenith
4 Overall
Pros
+ Works on a basic level + Quite an interesting blend of magic meets machine story-wise
Cons
- Terrible, terrible comedy and dialogue - Bland gameplay - Very irritating audio - Little to no RPG elements
Summary
Here's the harsh truth, kids. Zenith isn't that good and that's a real shame because on the face of it, things looked promising. The trouble is that the comedy falls flat at every turn and the role-playing elements are so light they're practically non-existant. Had the developers focused more on gameplay and less on jokes, we might be onto something. Comedy isn't easy in games and Zenith is exhibit A in the case of how to bad things can get. All is not lost though. The developers have created a functional product and after some more QA testing could have had a fairly average game. I do hope this is a stepping stone onto greater things for them. Don't believe the reviews giving it zeroes and ones but certainly don't be fooled into thinking this is anything special either.