Sega’s Yakuza series has been going strong for over a decade now with players in the West now receiving the games at a steady rate. After a small delay, Yakuza 6: The Song of Life finally takes to store shelves with a new engine under the hood. 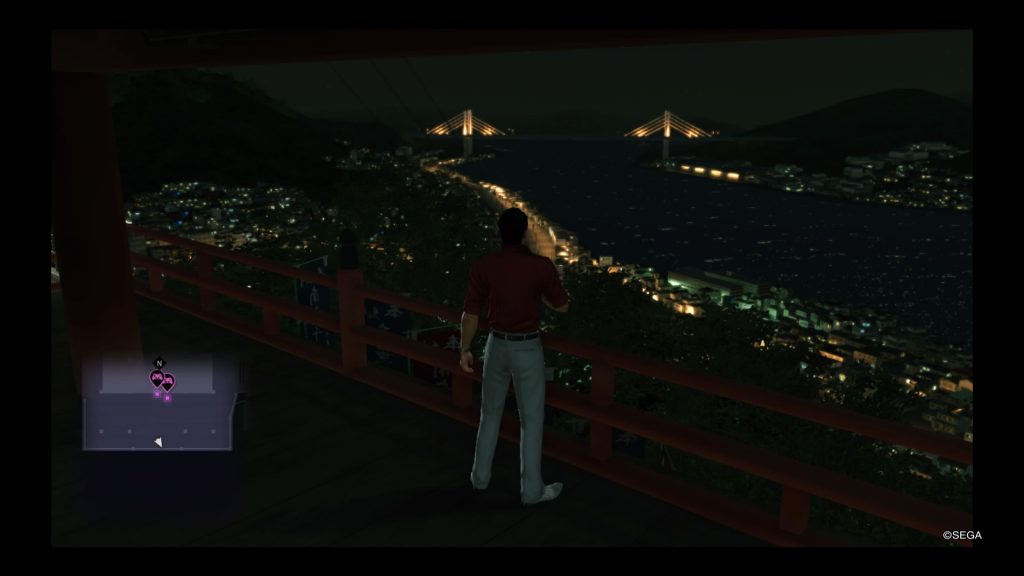 Long-time series protagonist Kazuma Kiryu takes to the streets once again as a fresh round of infighting strikes out. He begins the game back from another prison stint only to find Haruka, his ward has walked straight into a car. Comatose, the plot revolves around the mystery of the accident and Haruka’s infant son. It’s a story lifted straight from soap operas but the series has always dealt big with melodrama and twists. It’s one of the big draws for me and the tone and pace of the narrative manages to keep me invested, even if Haruka’s new motherhood status makes me feel very old indeed.

The new Dragon engine manages to showcase an intricate level of detail around the world. The series captures the flavour of Japan very well and the attention to detail often comes with it. I don’t consider it a huge stride over previous installments but things like facial capture manage to give the characters more life. As does the fact some of Japan’s leading stars lend themselves to roles. Most notably, Beat Takeshi portrays an old Yakuza patriarch with a fledgling family under his wing. 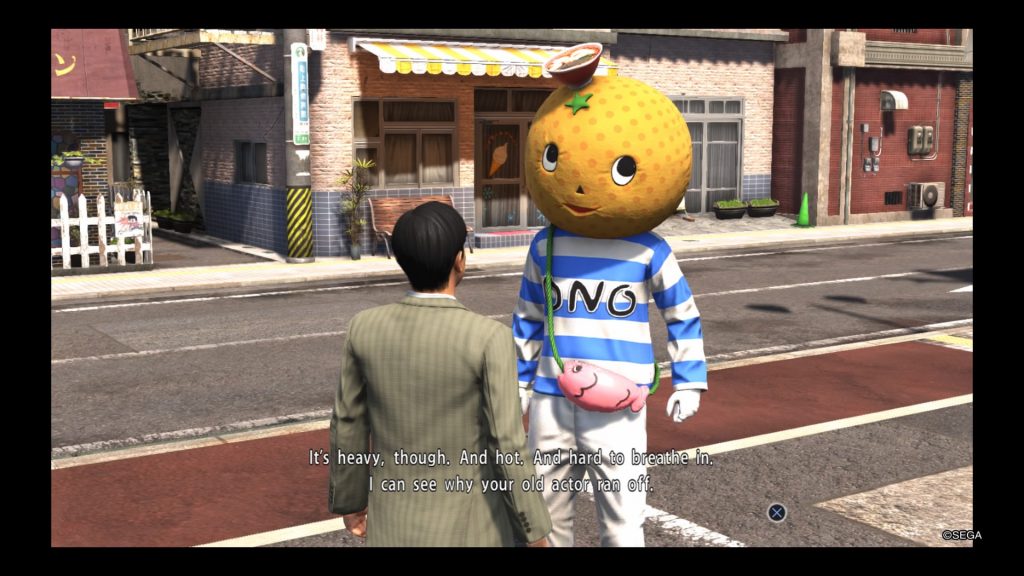 Having such assets at your disposal does help propel the story along with sometimes mammoth cutscenes laying out exposition and heightened drama. Sometimes it can feel like it’s dwelling on the saccharin a little too much but, after all these years, it’s to be expected. Family’s the big theme of this game with the topic under some serious examination. It’s enjoyable to experience whilst they don’t miss opportunities to deliver some daft tonal switches to take the edge off. It’s written and translated well for a western audience, as usual.

To anyone who’s ventured into the Yakuza series, it will feel fairly familiar. Out in the world, Kiryu will complete quests, substories and a host of other diversions to occupy his time in Kamorucho and Hiroshima. The latter venue is new to the series and the shipping port plays a significant role. It doesn’t offer much in the way of procrastination but offers a smaller slice of Japanese locales. 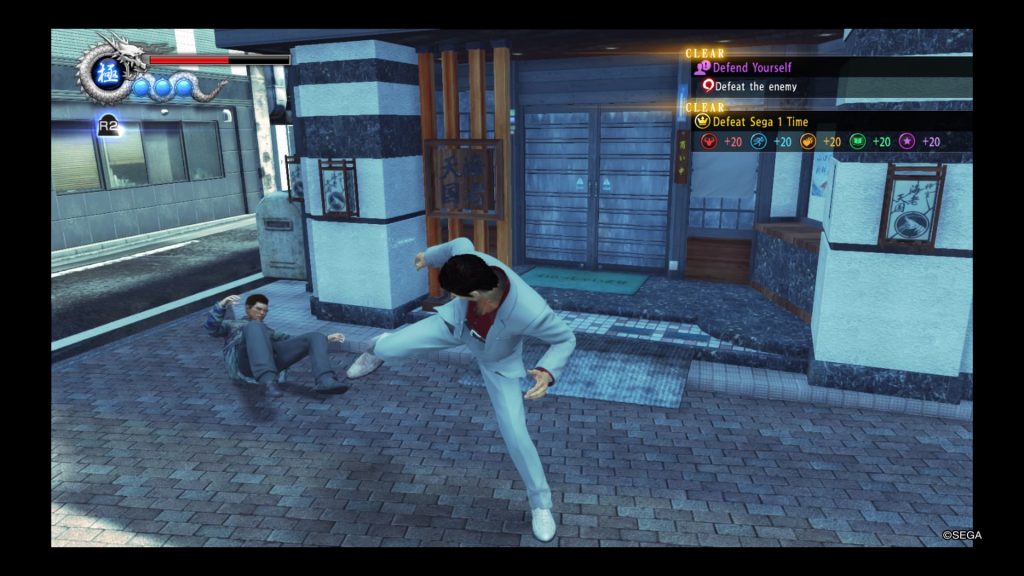 Overall, the package in Yakuza 6: The Song of Life seems smaller compared to previous entries. I found myself racing through the story inside 16 hours. I’m not a completionist and I usually play these games to ensure I’m proficient enough to survive combat. There’s less in the way of substories with only a couple of long-term things to divulge in. One of these being the Clan Battle. Consider it a light strategy game where you build your own members up and set them against members of JUSTIS. This gang is notable for being headed by some of New Japan Pro Wrestling’s top talent. I barely touched it beyond what was necessary but fans of the promotion will be pleased to have the opportunity to fight Kazuchika Okada and Tetsuya Naito in boss battles.

It’s a lighter experience in battle, too. Combat styles have gone and, with Kiryu being the only playable character, it can feel a little basic. Heat mode has been altered with the standard, extravagant moves supplemented by an extreme variant that allows you to wail on enemies for a set amount of time. On top of that, dealing with crowds can feel a little troublesome. You have moves you can unlock to deal with them but you can feel overwhelmed at times. The lack of styles can make you feel restricted although fighting in this series has never felt particularly challenging.

Character progression has also changed. You now receive experience in four different areas. You can spend these to increase stat points and new abilities. I actually enjoy this change as experience is handed out so often you will always find something to spend it on. On top of that, this feels like the first entry to the series where eating isn’t simply there to top health off or chalk an item off a checklist. You’re given tangible rewards for eating which can often amount to another point or ability. 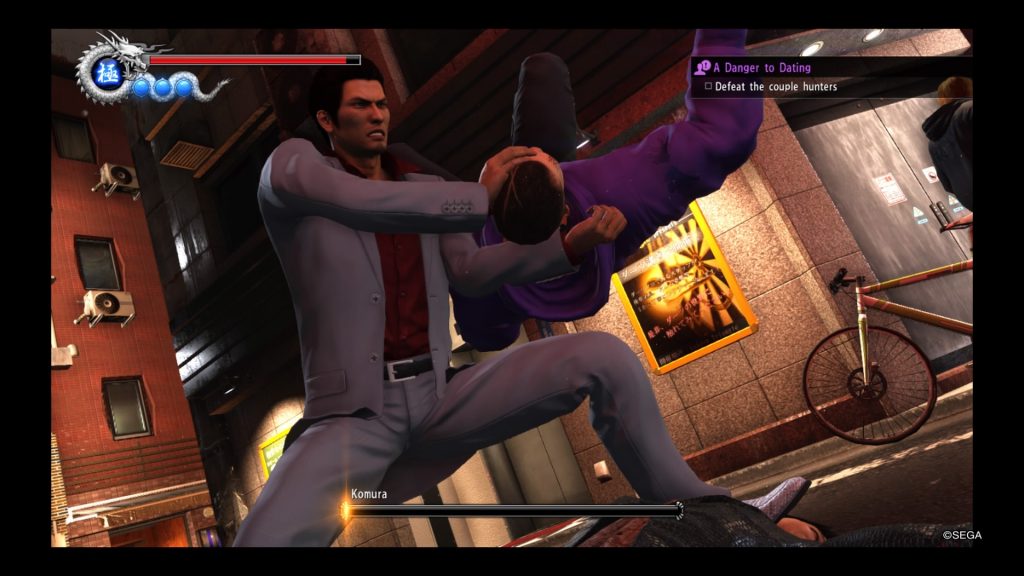 Yakuza 6: The Song of Life‘s condensed approach can make it feel like the series is in transition. The new engine retains a lot of the environmental details the series is known for and there’s a seamless quality to the world. You’re no longer waiting for loading screens when you enter buildings and fights begin as soon as enemies spot you. I do miss the trash talking that used to precede fisticuffs but this method speeds things up.

Yakuza 6: The Song of Life is a fine entry to the series but the more condensed experience might keep a few fans at bay. There’s more focus on the story with Kiryu being the only playable lead and the new engine manages to highlight the eye for the detail the series is well known for. It’s a much lighter experience than previous titles and the combat retains certain problems when dealing with groups. I still got my slice of melodrama and daft surprises and can be happy with that.

Yakuza 6: The Song of Life
8 Overall
Pros
+ Environments carry a lot of attention to detail.
+ Character and facial animations are great.
+ The story remains thick with intrigue and melodrama.
+ Plenty of content to divulge in.
Cons
- Combat feels a little simplified.
- Not as packed with side content as previous installments.
- A considerably shorter experience.

Summary
It's smaller and more focused than usual but Yakuza 6: The Song of Life retains the heart, charm and drama the series loves to dish out. Combat can still feel clumsy but it's rarely troubling or tough. There's a seamless quality to the new engine which helps keep pacing up whilst the story beats and tone remain well executed. It's a welcome installment, if a little lacking in some respects.