From Romanian indie developer Breadcrumbs  by way of publisher Versus Evil, comes action RPG Yaga. Having the publisher of the Banner Saga games onboard has definitely helped in terms of the additional polish with a fully voiced complement of varied NPCs as well as a sumptuous art style. Yaga is a game that could only really come from Slavic lands, given its basis in myths of the witch Baba Yaga. We’d heard of her before, her ambulatory hut on a chicken leg being at once familiar. Yet at the same time, deeply unsettling like something lurking deep in our psyche.

The storys begins with Baba Yaga cursing the tzar of the land at  the outset. He seeks eternal youth amongst other things and it is at this point the main protagonist Ivan joins the frame. All is well and good until Ivan is trapped by the malevolent spirit Likho who cuts off his left arm. All done quite matter of fact as if that’s how things go down day to day in this part of the world. It’s a remarkably bleak beginning to a game you soon realise is pure nightmare fuel for any younger players that might happen across Yaga. With that in mind, probably worth playing it once your kids are tucked up in bed. Scooby Doo this certainly is not. 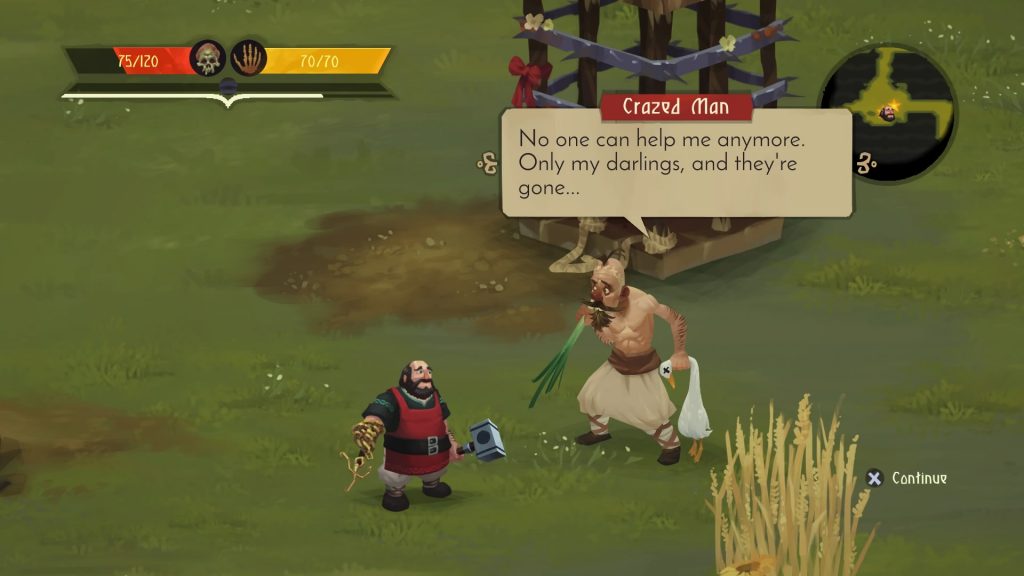 The cursed tzar soon recognises the humble serf as the prophesied individual who’ll bring his rule of the kingdom to an end, so he starts sending Ivan off on what he thinks to be unsolvable tasks. Only Ivan manages to resolve them through a mixture of cunning and the odd fib, the tzar being gullible enough to believe Ivan is on the level. First you’ll be tasked to find the golden apple of strength, then the water of youth, finally culminating in seeking a bride for the tzar. This might seem a little slight, but the five moral options really flesh out the package here. You’ll not feel hard done by when your first playthrough is done as you can have another go. Only this time you can be a right bastard if you so wish.  An aggressive playthrough might mean you’ll get into fights that bit more often.

You pick up additional quests in the village adjacent to the tzar’s palace as well as in the wild. These ranging from finding the missing village drunks to avenging the apparent death of a grieving widow’s husband. These are mere asides to the main quest however, but they add a lovely bit of flavour. It helps that all the NPCs are lovingly voiced with various regional British accents, the undertaker being a particular highlight. To begin with you’ll be wandering around in the woods finding the prerequisite items to get Baba Yaga to help you upon your way. 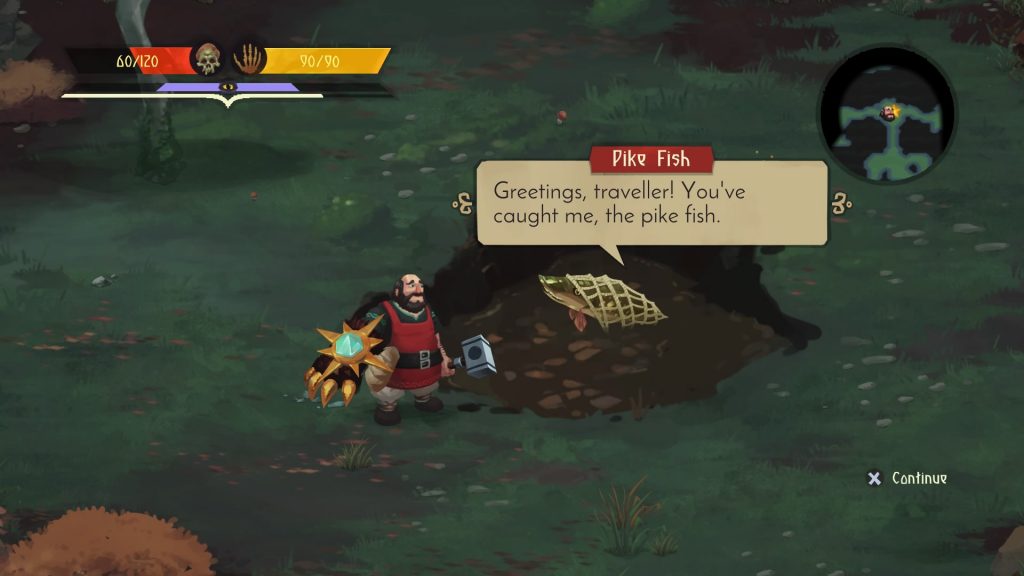 You’ll die often until you realise you often lose your weapons, needing to craft new ones to prevail. Though there is also a trophy for not crafting a single item all game so you’ll have to struggle along without. That is assuming you hate yourself. Fights against enemies are generally straightforward enough. Melee enemies generally hit harder unless you take them down first. Similarly ranged enemies are often the biggest threat so you’ll do well to close in on them quickly and melee them.

The loading screens that might otherwise exist between quests are cunningly window dressed. Your are overseen by Baba Yaga and her retinue of fellow witches who let you choose the conditions you encounter. The time of day affecting enemy strength or how hard you hit for example. It’s a clever way to make it look like the witches are surveying your every move as you proceed. 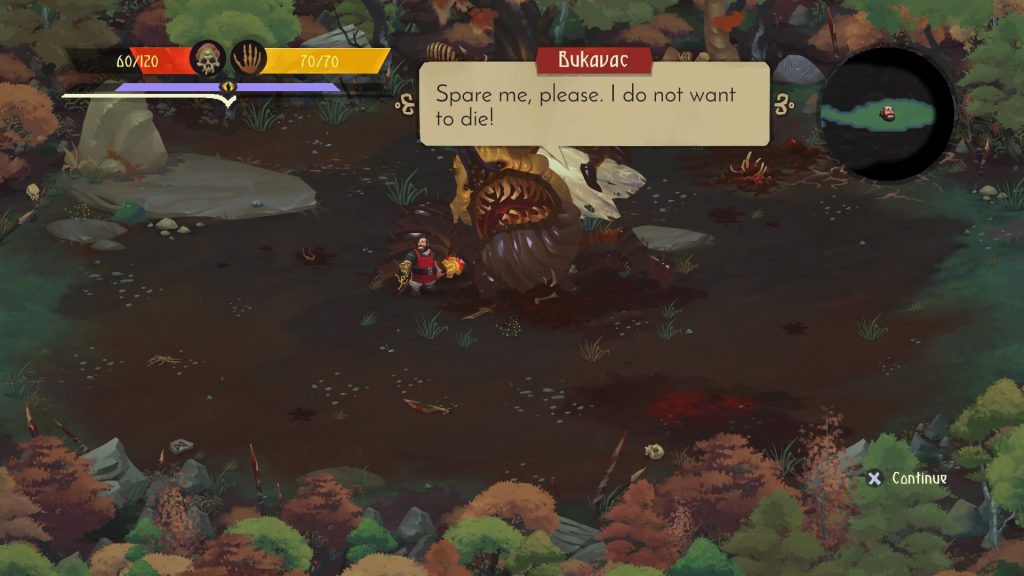 You’ll face off against occasional boss fights, but being a somewhat more enlightened guy you’ll have the opportunity to spare them rather than striking a killing blow. In one case you can summon the sub-boss you spared to wade in and help in a fight. It’s a little like summoning in Dark Souls we guess, but a one-time only offer. Other acts of mercy will grant you trinkets to turn the tide of fights or make your stamina last that bit longer.

Being a blacksmith, Ivan is able to craft tools and weapons as he goes. A rather more resourceful sort than Ash from housewares, he utilises his stump with more than a mere chainsaw as he progresses. Tools include a hookshot analogue a little like that in any number of Zelda games and a gauntlet fashioned from a deceased bear’s claw. A little macabre perhaps, but no more so than losing your arm…

The first time you unlock a tool you unlock a blueprint that allows you to craft it at the hub where you take breaks between quest attempts. When you craft items you can add ore and other items that affect the attributes of the crafted weapon. For example a bleed effect can be added if you include an arrowhead in the ingredients. 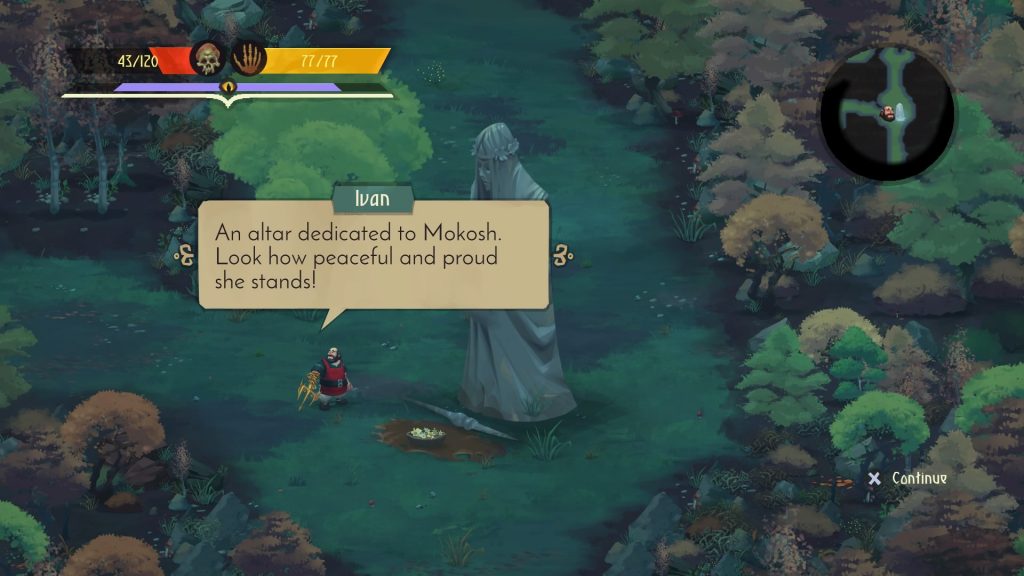 You’ll happen across shrines to the various pagan gods worshipped before Catholicism looked upon these lands with envious eyes. Their names familiar if you’ve ever read American Gods., Chernobog for example. If you make an offering that they deem worthy, you will get either a blessing or an item for your trouble. In addition, the landscape is dotted with characters asking you to perform subquests on their behalf, one particularly amusing example including the son of a distraught farmer.

In this instance the son was quite alright, having gone into the woods with his betrothed where nature took its course. It was pretty amusing, especially when the parents were in on what was happening. The local priest on the other hand was aghast at the moral turpitude taking place on his watch.

Fights are very well done and pretty intense, to the extent we initially failed to take any screenshots of any fights during our first playthrough. Not ideal from a review point of view, but it does highlight the danger you face. Your progress through the landscape is halted by fights, magic barriers flying up when you encounter a group of enemies. No kiting a huge bunch here, you have to kill all the enemies in an area to proceed. 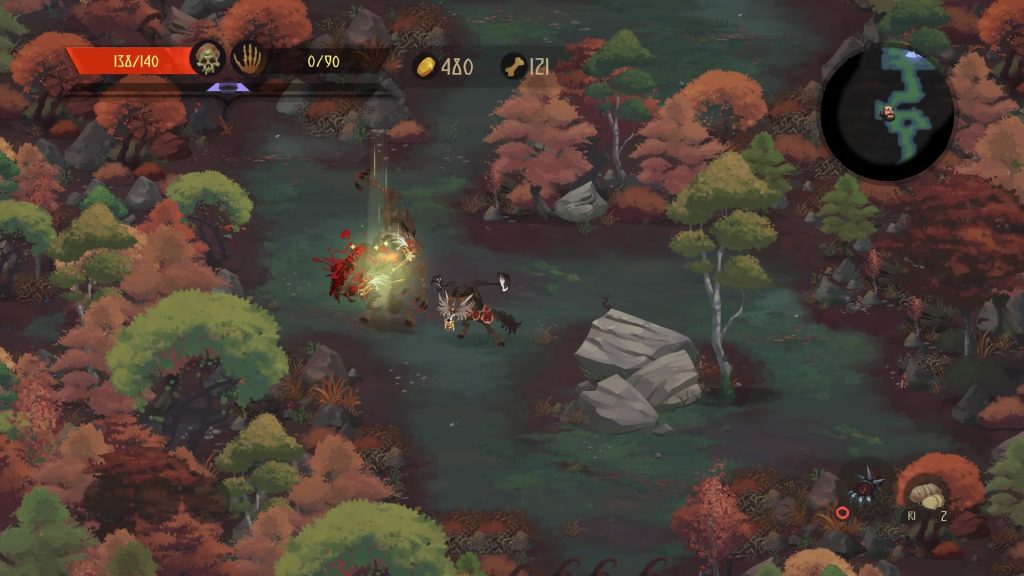 Every time you hit an enemy, use a magic item or gain a blessing, your bad luck meter will increase. Eventually you’ll attract the attention of Likho who’ll come to reset your meter, at a price. Usually breaking your equipped tool or stealing a fair proportion of your inventory. It’s more annoying when Likho shows up and takes away a load of useful trinkets you have equipped. Moreso since they aren’t quite so easy to replace as a tool is. Your bad luck is filled quicker when you choose a moral option that’s not aligned with your overwhelming personality.

It’s a little like the paragon and renegade system in the Mass Effect series, only less binary. Your choices will either be righteous, aggressive, neutral, foolish or greedy. It makes for a rather more morally ambiguous plot if you choose anything other than righteous anyway.

Your actions fill an experience bar and periodically you’ll be able to choose an upgrade that takes effect the next time you venture away from your bedroll. After a while these choices become less varied and you realise you’ve probably unlocked the more useful options already. It’s understandable that there’s only a finite number of options, as it would be too easy to concentrate on a particular upgrade path otherwise. 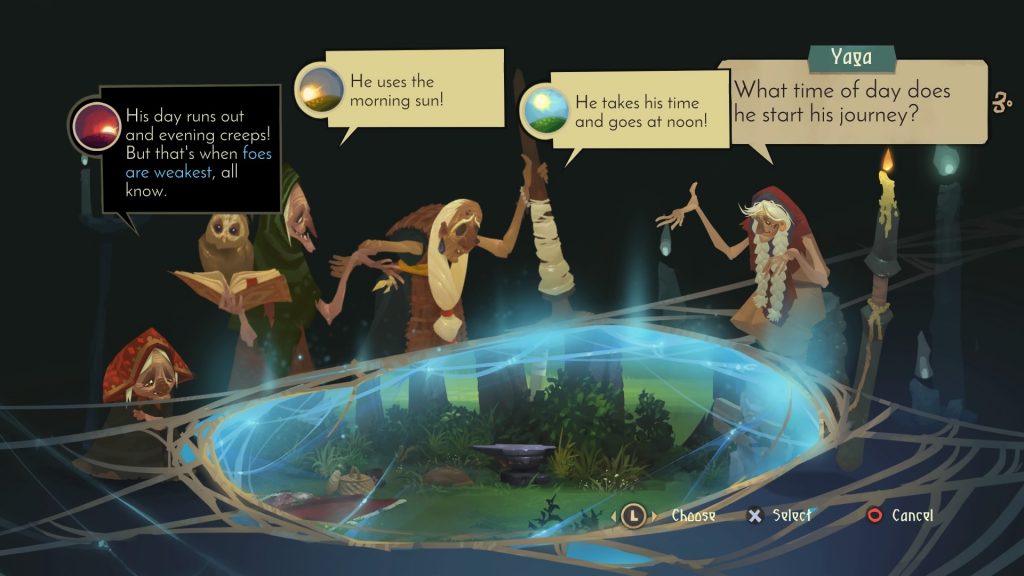 This is all soundtracked by what we can only describe as Balkan techno, it’s a bit like that Venetian Snares group our stepson was into a while back. It’s generally fantastic, but occasionally the percussion overwhelms the battle themes. It’s a rare blip in an an otherwise faultless audio experience.

We’ve also had Yaga crash altogether on us, oddly both recent occasions have been when we’ve attempted to blow up explosive jars with our hookshot. Perhaps the combination of objects is more than the game engine can reasonably cope with. The second instance was particularly galling given we had been making great progress on a quest until that point.

All in all then, Yaga is a great action RPG with excellent music and wonderfully evocative storyline. It does a great job depicting the collision between the Catholic church and the long established pagan rituals and traditions.

Yaga
8 Overall
Pros
+ Excellent voice acting and music
+ Wonderful sense of place
+ Great feeling of every move being scrutinised by the titular witch
+ Morality system is well implemented
Cons
- Likho's actions can feel overly harsh
- If you're not tooled up, can be difficult
- Occasional crash bugs
- Upgrade path can feel a bit constrictive
Summary
Yaga is a wonderfully evocative action RPG set to a Slavic mythological theme and bafflingly catchy Balkan techno beats.