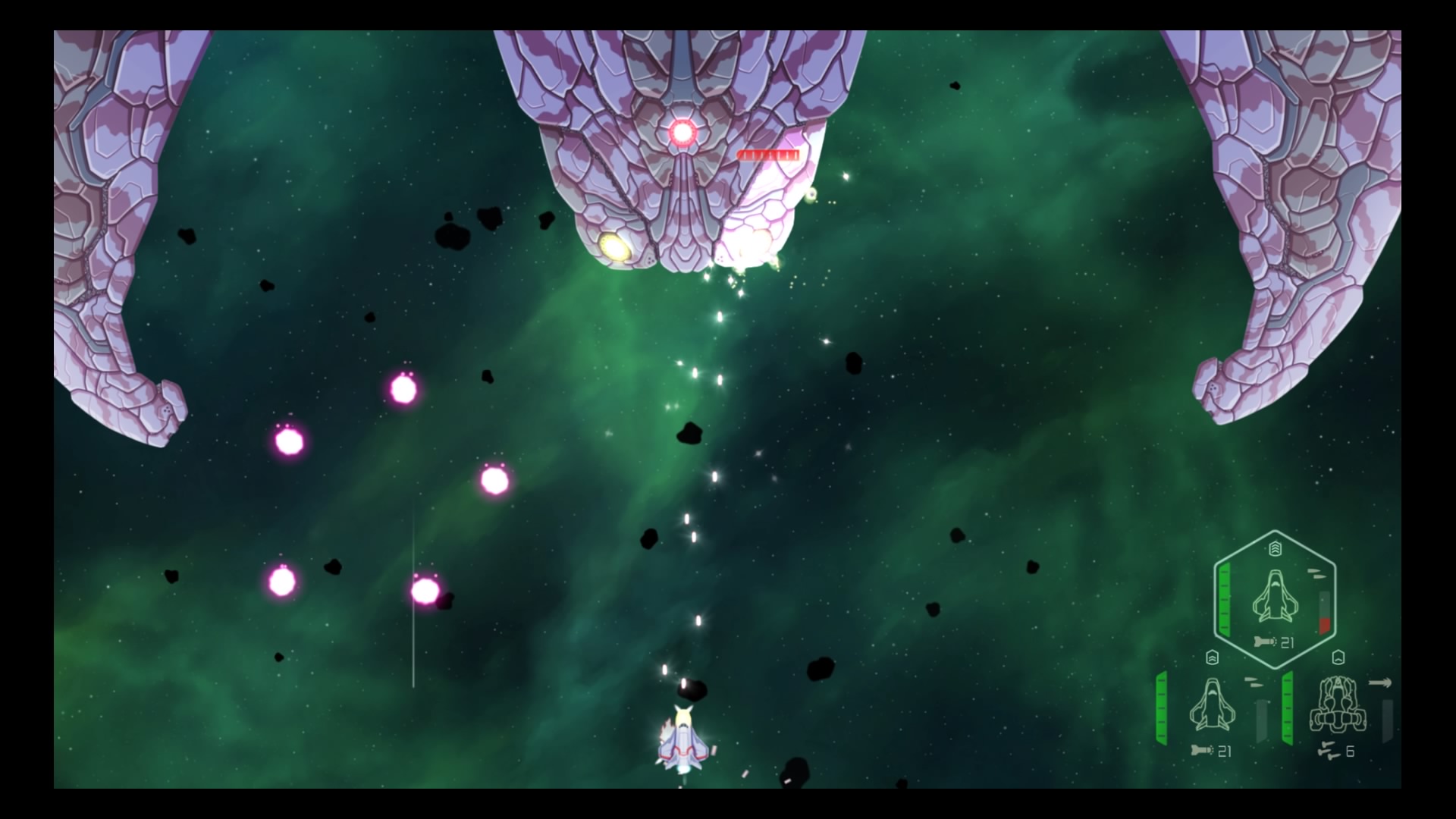 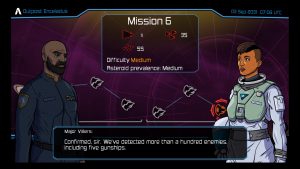 Xenoraid is the latest project from Jaakko Maaniemi at 10 Tons Ltd (Tennis in the Face, Neon Chrome) and is a vertically-scrolling shoot ’em up with a host of features that are quite unusual for the genre.  In the same way that Neon Chrome took the twin-stick genre and added a heap of rogue-like mechanics on, this does the same here.

Xenoraid sees you flying ever upwards through an army of enemy fighters occasionally punctuated by bigger foes and boss battles.  But it includes a clever upgrading mechanic and some squad-based combat that adds a few layers of strategy to the game.

The game is broken into five chapters with each having a series of stages to fight through.  These are grouped into checkpoints as well.   At the start of each main chapter you’ll have some credits to play with and a squad of four pilots.  Each pilot has a ship but the game decides what type of ship they will have.  You can upgrade each ship individually, improving their primary and/or secondary weapons and, on some ship types, their hull and armour.

You can also purchase team upgrades from a selection that increases as you get further through the game.  These can improving the weapon cooling for the whole squad or their armour and various other considerations.  Do you put your credits into additional ammunition or do you off-set those huge repair bills by buying some expensive automatic repair technology up front?  There are always good options to consider and your loadout strategy is up to you but it will be shaped by quite a few unsuccessful campaigns first.  But, and this is important, the difficulty is nowhere near what you’ll expect from the usual roguelike type game (and Xenoraid sort of is one itself), making this a lot less frustrating. 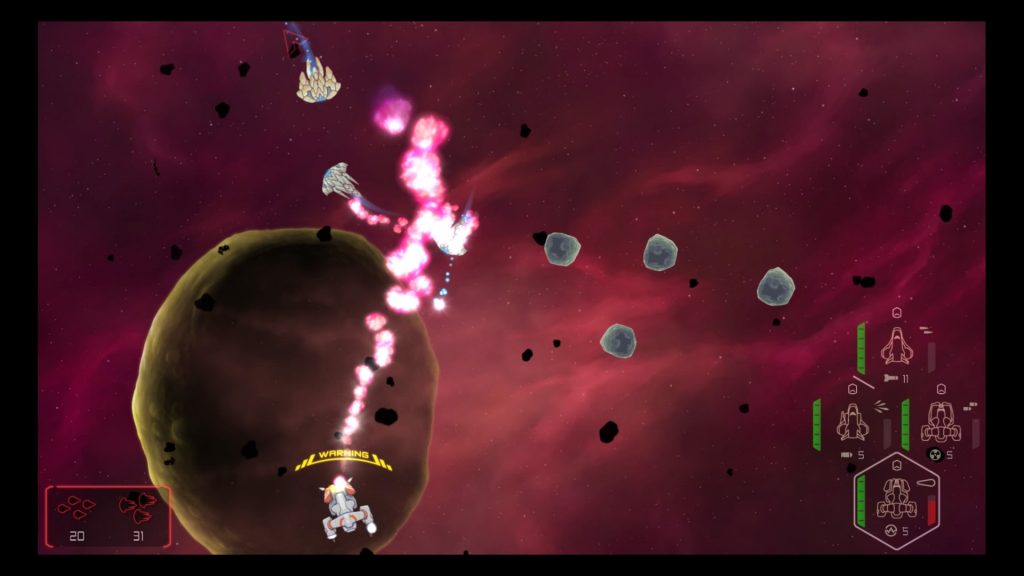 Once you feel equipped to face your enemy, you’ll start the journey upwards.  Enemies will swoop down into the playing area, either looking to shoot you or crash into you.  Your primary weapon, usually a machine gun or laser type of affair depending on the ship you currently have active, can be aimed slightly as it leans with you (thankfully, they’ve given you the option to turn the lean off which is the first thing I did once I realised it was there) and you also have a secondary weapon (missiles, EMPs and such like) that you can employ.

As soon as one of your squad is close to dying, you can switch them out on the fly and keep going with another ship and pilot.  Also, some ships are better suited for certain encounters and so there’s a nice bit of strategy to consider as you play.  Some ships may seem initially a bit useless (such as the one in the screenshot directly above) but with upgrades, and the right enemy type, they all come in useful.

If a pilot does die, that’s okay because you can refill their position and buy a new ship but ideally you want to spend those credits on better things and so, if you lose someone, you may want to consider going back to the last checkpoint.  Also, you may want to go back if you end up buying upgrades that aren’t really that useful as having the right set up really will improve your chances of survival. 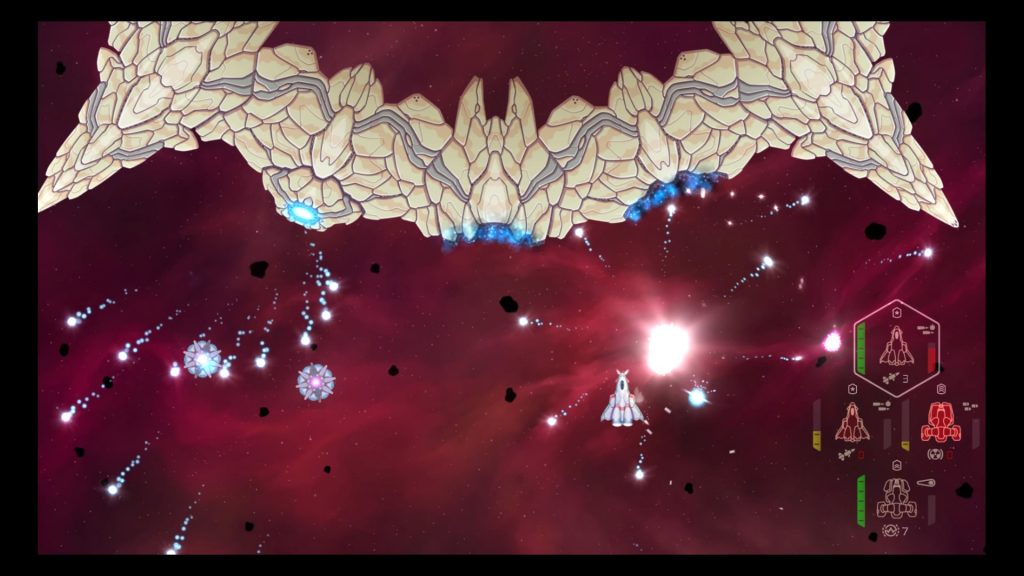 Once you get past the enjoyable loadout management, the space combat is a little bit weedy in terms of dynamics.  The sound effects are pretty feeble and the explosions aren’t going to exactly rock your face off.  Likewise, the cartoony graphics are inexcusably weak.  It’s a real issue but the gameplay did grow on me.  Initially, I was underwhelmed but this game has been under embargo for a couple of weeks and in that time I’ve finished it and have enjoyed the challenge.

The levels are procedurally-generated which means you won’t be memorising any patterns.  Instead, you are much more in the moment and when you start figuring out what upgrades work best for you, you’ll eventually start making good progress which adds to the games appeal and its addictiveness.   That said, it is still fundamentally quite a simple game engine powering the game and so if you’re looking for a dramatic, exciting shoot ’em up full of explosions and TV screen burning lasers, this isn’t the one.  Likewise, if you want a more formal shoot ’em up, Caladrius Blaze is going to be a much better, if more expensive, option. 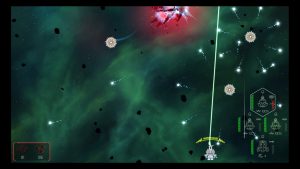 But if you approach Xenoraid as a game where your loadout strategy is just as important as your shoot ’em up skills, then it can be very rewarding and enjoyable.  We’d loved to have seen an even bigger selection of upgrades and a lot more from the game’s sound and visuals but this little indie game certainly won us over with it’s clever spin on a long since perfected genre.  But be aware:  when you first see it in action, Xenoraid seems kind of dreadful but give it time and there’s a good game hidden in there.

Xenoraid
6 Overall
Pros
+ Good upgrading system + Quite addictive + Some challenging shoot 'em up action
Cons
+ Gameplay could be more exciting + Bland, simple presentation
Summary
Xenoraid hides some good gameplay deep in an initially weak-looking package and it hides it well but fans of the genre who want some cheap, but different, shoot 'em up action may well end up enjoying the game.