We reviewed Xenon Valkyrie+ on the Vita back in December and now it’s made its way to the big screen of the PS4. I didn’t review the Vita version, I’ve not even played it, but from what I can tell very little has changed. 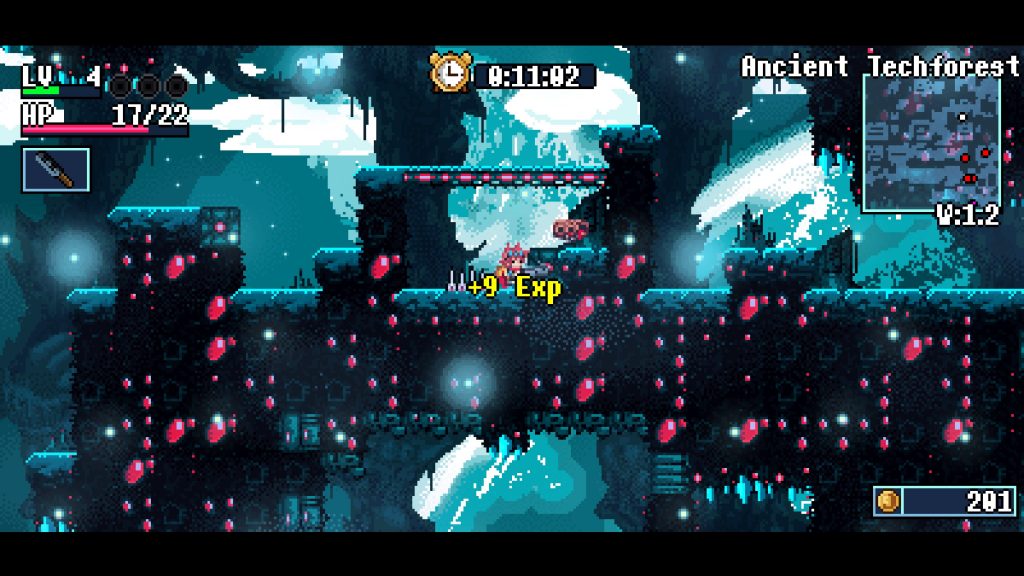 Xenon Valkyrie+ is a rogue-lite, a run based game with permadeath and little progress that carries over between sessions. You choose from three different heroes at the start, each with different stats and starting ability, and teleport into the first stage. Although there is an aesthetic style to each world the levels themselves are randomly generated. You always start at the top of a level and work your way down, with some minor platforming allowing you to wall jump up vertical surfaces. Enemies populate the stage and killing them, with your sword or limited ammo gun, nets you experience points. Level up and you get a Talent Point which you can use to upgrade your stats between levels.

You also collect money and if you defeat a larger enemy then they will drop a key which allows you to open a chest if you find one. These chests hold a random weapon, it may be better, it may be worse. Generally I’ve found that each run I’ve taken I’ve got a little further so luck isn’t a massive factor but if you get a decent weapon from one of these chests early then it can make your life much easier.

Get to the bottom of the stage and you’ll find a teleporter that you can use to return to the top of the level, in case you fell past something you want to return to, or you can move on. Moving on takes you to a safe zone where you can use your money to buy a random choice of life, bullets, shields or Teamerite. Teamerite is the one currency that carries over between runs and is generally awarded after defeating a boss. It lets you unlock new weapons which are added to the random pool you draw from and can also be used for one run buffs if you’ve unlocked the ability. You can also talk to NPCs in these safe zones, some of which will ask for items which will sometimes reward you handsomely. 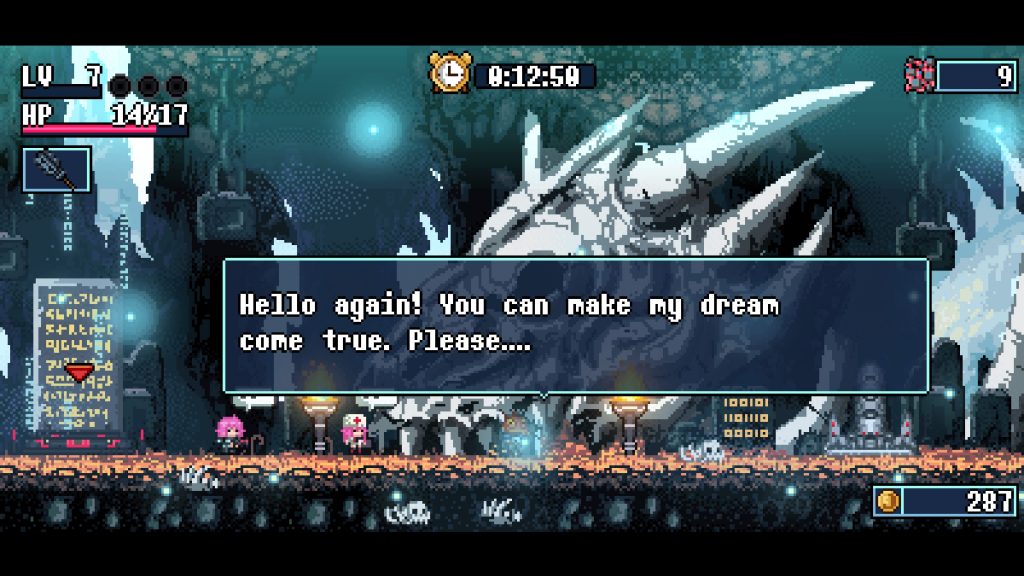 At the end of two levels you’ll face a boss and there seems to be a couple it could possibly be each time. For some reason they remove the ability to use you gun or character’s special during these fights which feels weird. I get that they didn’t want you spamming the gun or getting an unfair advantage but maybe they could have designed the bosses with these abilities in mind rather than just letting you press the button and have nothing happen with no explanation. I found the bosses to be quite disappointing, with only one cycle to learn with you hitting it with your sword, the damage you do reliant on how lucky you’ve been with pick ups.

As I said earlier defeating the boss generally nets you some Teamerite and sometimes some items which give you slight buffs. Annoyingly there doesn’t seem to be an explanation of what each item does so unless it’s obviously named then you’ve just got this item which is probably doing you some good. There is a similar problem with the character abilities though these are easier to figure out on your own. Initially I only looked at the stats which makes the hero choice pretty easy as one starts with a higher attack stat and has only slightly lower health, but once you realise what the abilities do they become a little less easy to separate.

One character has a radar that will ping important items on the map (chests, stronger enemies and the goal), one has a bomb that can blow through the fully destructible levels to access areas easier and one lets you jump super high. The radar and the bomb have a short cool down whereas the jump you can use as much as you like. Each has their benefits but I settled on the bomb user as although everyone has three grenades to start which do a similar job you’ll quickly run out and bombing through to an otherwise easy to reach stash of gold is incredibly important. 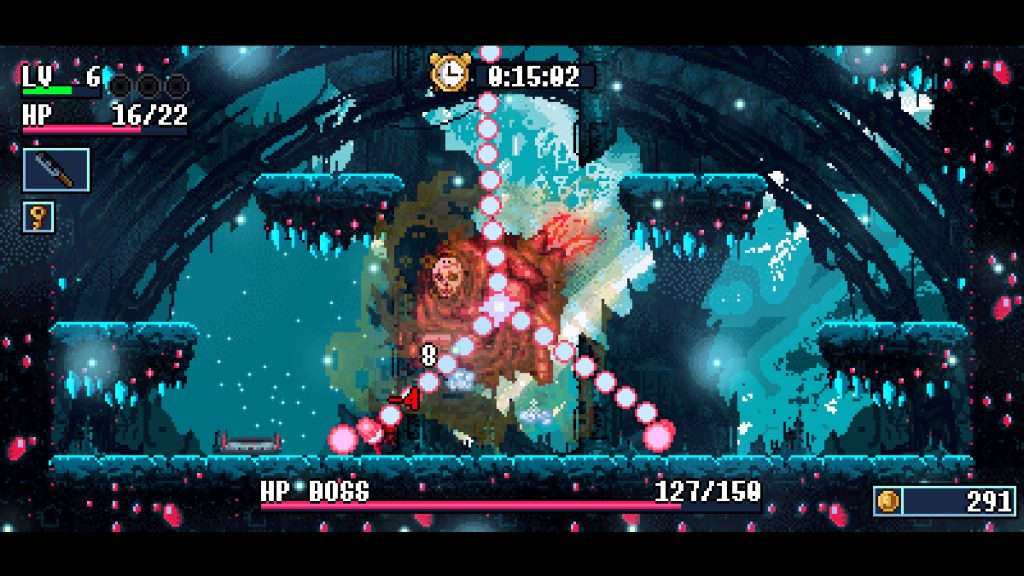 A good run can last over an hour if you start from the beginning. Teleporters which you can unlock allowing you to jump ahead probably cut down the time theoretically, if you can manage entering a later stage with basic equipment (you are given some Talent Points to spend at least). Runs can end quickly however. Your health pool never becomes massive and you can be hit by the silliest things at times. As you play you definitely get better at identifying and avoiding the danger but the controls are just loose enough that there are still times where I get hit and don’t feel it is necessarily my fault. However one hit isn’t going to kill you so if you can get to the end of the stage and if there’s a health pick up to buy you’re usually going to be alright, I just wish the controls were tightened up just a little.

Visually I’m guessing things are exactly the same as the Vita. It goes for a 16-bit aesthetic and nails it, along with some great chip tunes. At times it can look very nice, in a retro kind of way, however I do have issue differentiating the background and the foreground semi-regularly. This is never gameplay ruining but shouldn’t really be happening. Similarly, primarily against bosses, I sometimes have trouble figuring out hit boxes which can lead to me missing attacks or getting hit myself. Like the controls if these elements could have been tweaked a little then you’d be looking at a strong title. 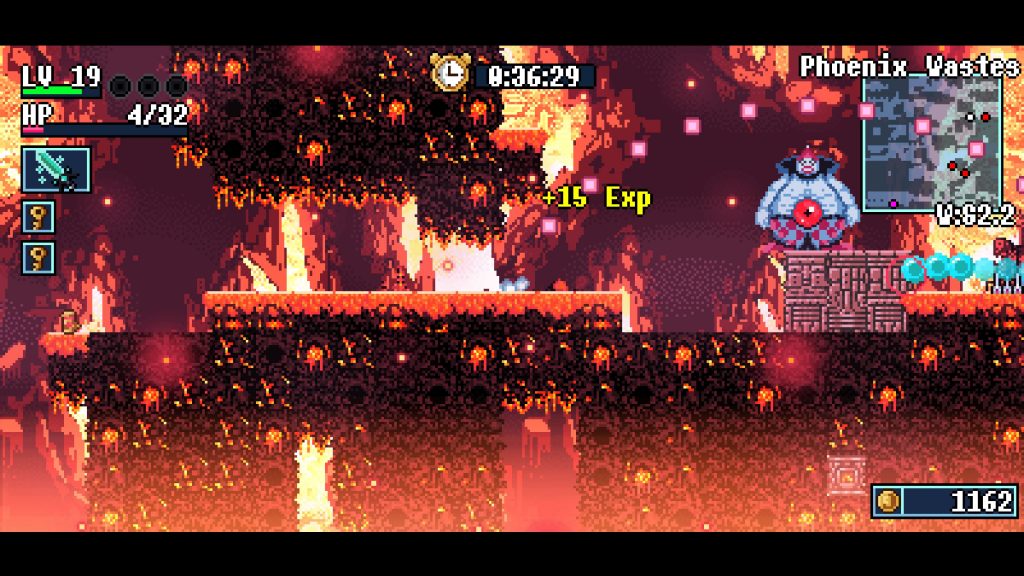 As it is Xenon Valkerie+ is a fun game in short bursts that isn’t completely reliant on luck, allowing those who stick with it to make good progress. Some item explanations, tighter controls and visual tweaks wouldn’t hurt but as it is this is an enjoyable, rewarding game that will satisfy those looking for a slightly stricter rogue-lite.

Xenon Valkyrie+
7 Overall
Pros
+ Runs don't rely on luck
+ Some great chip tune music
+ Good, retro themed visuals
Cons
- Visuals can be a little unclear
- Controls are a little loose
- Some item descriptions would be nice
Summary
Xenon Valkyrie+ makes its way to PS4 with little in the way of changes. What you do get is an enjoyable 2D rogue-lite that's not overly reliant on luck which ensures that as long as you're paying attention you'll get used to the loose controls and make progress.