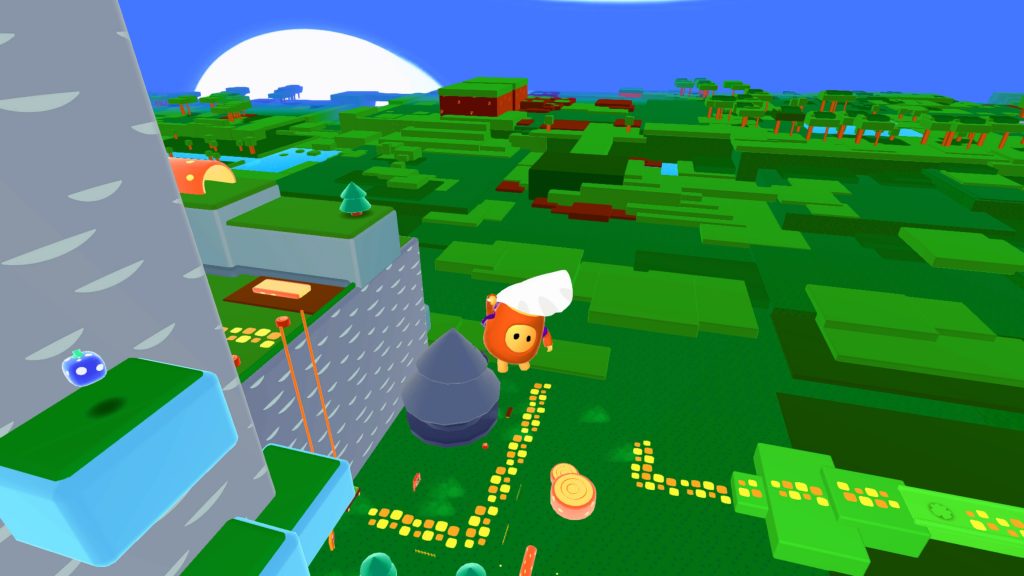 Woodle takes to the skies with ease on his leaf.

As much as we have been gifted with a resurgence of sorts for the 3D platformer genre, it does feel that the in the HD era, we are still getting the short end of the stick on anything other than a Nintendo platform. We have been getting some standouts, but for every Yooka-Laylee, there are a whole bunch of Unity driven Mario clones to contend with also, that barely qualify as anything that would be worth the time of the N64 owning retro-heads in the crowd. Chubby Pixel, the developer of this game is clearly seeking to be the former, by trying to bring back the violence-free happy adventure of days past.

Woodle Tree 2 has you playing as the titular hero Woodle. Woodle is an anthropomorphic tree trunk who is tasked with bringing colour back to his world after a sinister force steals tears from the tree guardians that lord over the previously vibrant scenery. Woodle must visit areas of his world to collect the tears and in doing so, will bring back the guardians. As story’s go, it’s standard and reminiscent of a few games I have reviewed previously. What makes this somewhat different however is that the story doesn’t shoehorn the player down one specific, linear direction. Instead, after the initial tutorial area, Woodle can visit any location in the game with only minor restrictions getting in the way. 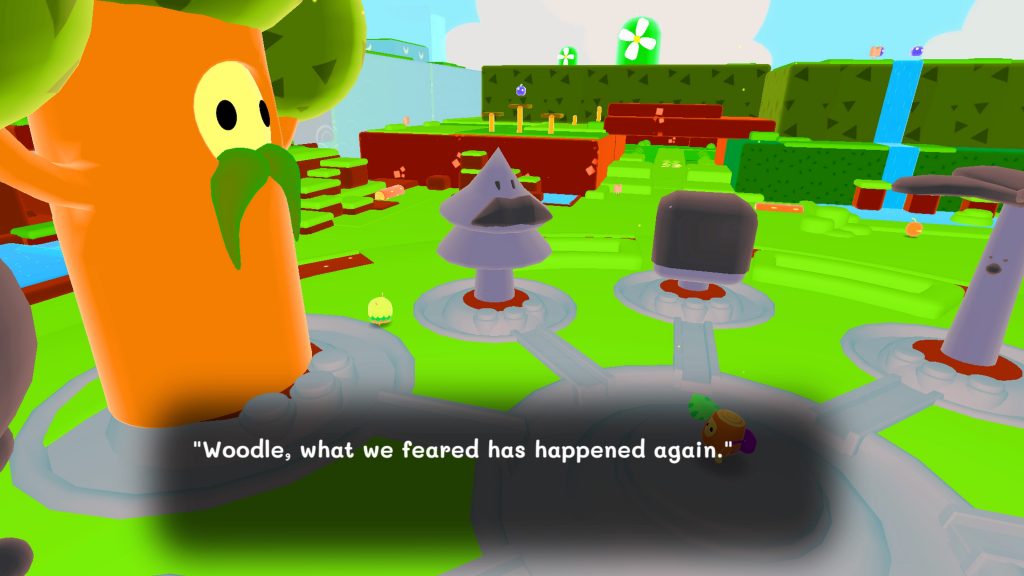 These restrictions come in the form of very simple blocks, literally coloured blocks that get in the way as you try to progress. What is odd about these is the method in which you upgrade Woodle’s leaf weapon in which to get rid of them. Players of almost any game with upgrades would be familiar with collectables being used to buy this type of upgrades, but very rarely is it the case that you are able to buy the best upgrade before any of the previous tiers. Woodle Tree 2’s main currency comes in the form of berries that are littered around the world and they can be used to unlock costumes for Woodle or the previously mentioned leaf upgrades. This is nice if you fancy sticking around for a while, but as you can buy the best item in the game with only minimal effort, it stands to question why you would want to bother with those.

That previous point may sound like a nitpick, but there is a reason why such systems exist in other games. If you allow people to unlock the best items, spending only a short amount of time as opposed to actual effort, then a lot of the incentive to play further or get invested is removed in the same breath. It also removes the feeling of reward that spurs the player on to work for that next reward. The berries used to buy things are naturally abundant within the world and even if they were hard to find, players can simply reload the game from a recent checkpoint and all of the berries will have returned to be collected again, genuinely removing any challenge or reward for exploration to find more. 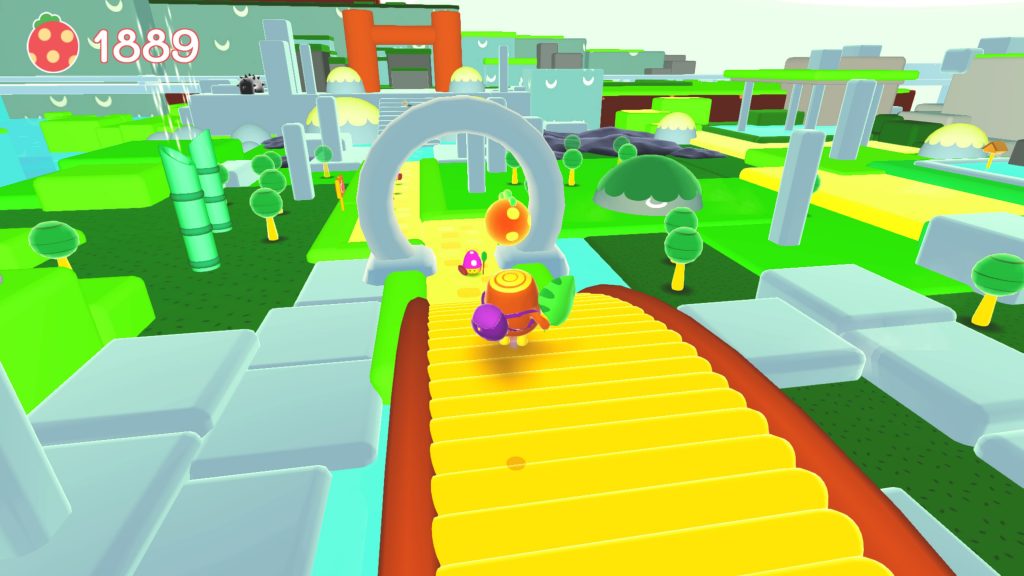 Sometimes, Woodle Tree 2 is a delight to look at. Sadly this is a fleeting feeling.

The above question raises many others about the various flaws that appear while playing Woodle Tree 2. The main one being, why is the world so big and able to be tackled in any order when it is almost devoid of content entirely? By making the world a sandbox playground with little barriers, the game feels empty and even worse it can complicate matters by making things more difficult to work out. It took me a good hour or so after clearing the tutorial to find where I needed to go next, it then took a further hour or so of mind-numbing exploration through the colourful expanse to try and find the puzzle or platforms that yielded the tear shaped McGuffins that allowed me to actually progress in the game.

Luckily, Woodle is a nippy little character. Every move of his is built around mobility, allowing for some fluent platforming action, whether it be double jumps, gliding or even a rather neat surfing ability that allows you to speed along the ground with the grace of tony hawk. Everything works neatly, at least that is the case until it doesn’t. Unfortunately, there is a responsiveness issue that is prevalent throughout the game. Sometimes the tap of a jump button just does not register correctly, and this can lead to many an untimely death. I found that this was the case whenever there was a drop of framerate due to a micro-load, which happens all too often during gameplay. 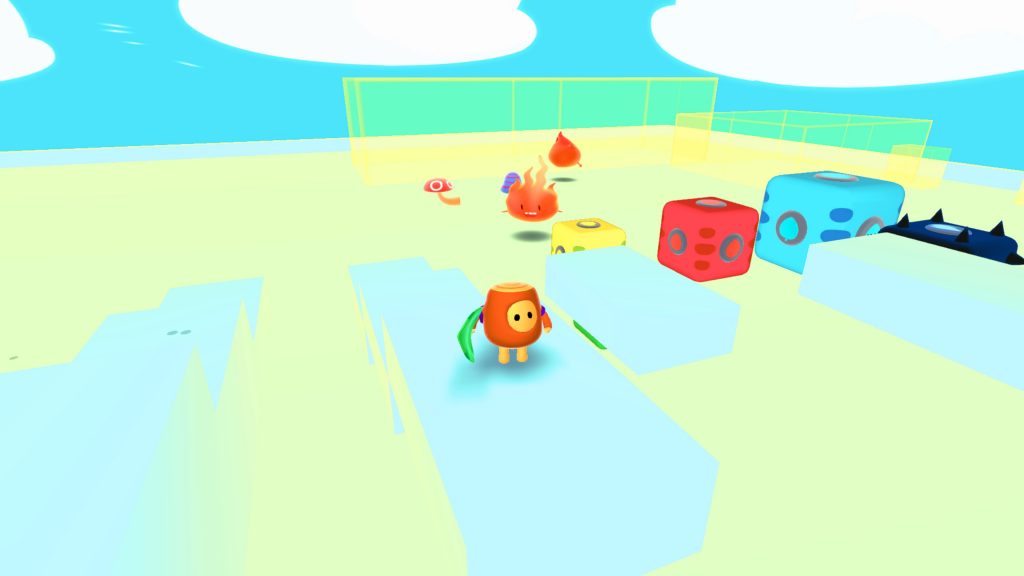 I’m pretty sure that i shouldn’t have been able to find this.

This particularly becomes a problem when you are playing the dream challenge stages. These are built similarly to the non-Fludd levels in Super Mario Sunshine, these are pure platform challenge stages and require some serious jumping ability to be able to clear. They are fun and a good change of pace, but not on the thirtieth try when a well-timed jump turns into a clumsy tumble into the abyss. Sadly, this isn’t the only glitch in the game either. I also encountered a warp glitch where the world’s ground just didn’t appear after a quick warp back to town, this happened a few times on the trot as I tried to get things back on track. This also led to the discovery of a development area, something that should be completely inaccessible under normal circumstances.

Where Woodle Tree 2 does shine is within the visual design department, almost too brightly in places. The world and characters are suitably cute and inoffensive, with each world area being given a semi-distinctive feel. I say that with trepidation as the visuals are incredibly minimalistic. The game won’t win any awards for detailed textures or realistic vistas, instead it is stylised to a basic, primary coloured look with green blocks being used for meadows and forests, blue for ice worlds and red for fire. The unfortunate part is that this can make each area seem incredibly samey, as there is little in terms of unique assets that set each area apart. Puzzles are lacking also, and this seems to be a limitation created by the minimal assets available to the developer to use. This even becomes a problem when viewing simple things like the control tutorial signs, which i glossed over at first, but it turned out that the Nintendo Switch buttons were being displayed, not the PS4 ones, which is nothing short of a sloppy and careless mistake. 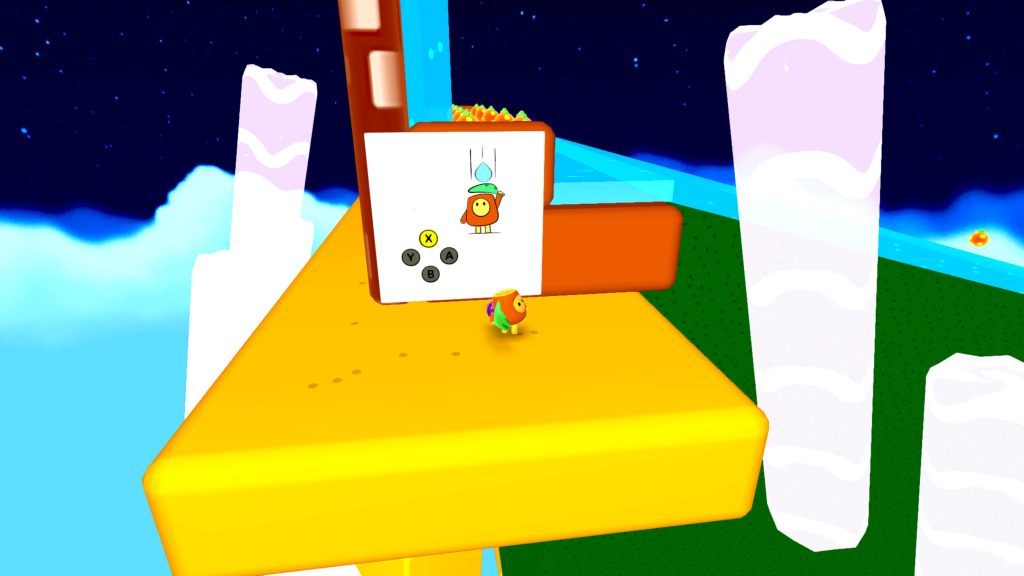 I’m thinking that Chubby Pixel may want to ‘switch’ these instructions out.

Speaking of minimal assets and samey, the soundtrack is incredibly boring. It sounds at odds with the type of game being played, with somewhat orchestral audio seeping in to provide gutless sonics that juxtapose the cheerful insanity on screen.

Unfortunately, Woodle Tree 2 joins the pile of disappointing platformer attempts. It doesn’t feature anything that makes it stand out and the open world sandbox that should be a big selling point does more harm than good as the little content within is not enough to keep a non-tangential experience worth the hassle, which is a shame as with a bit more time and a few more distractions on the side could have made this an interesting distraction while waiting for new AAA games to land.

Woodle Tree 2: Deluxe+
4 Overall
Pros
+ Nice and cute character design
+ Has a good mix of accessibility and challenge
+ Performs well enough
Cons
- Unresponsive controls, often resulting in cheap deaths
- Features a large sandbox world with next to nothing in it
- Seems poorly thought out in some parts due to poor content gating
- Glitchy to the point where the ground did not spawn
Summary
Woodle Tree 2: Deluxe+ seems like a good, honest attempt at the sandbox platforming genre. Unfortunately, with this there is a laundry list of issues, such as unresponsive controls, poorly thought out content gating and the odd yet substantial glitch brings the game-feel down to a crash landing. A bit more time in the oven and Woodle Tree 2 could have been something interesting, instead, it just ends up feeling as wooden as the lead character.