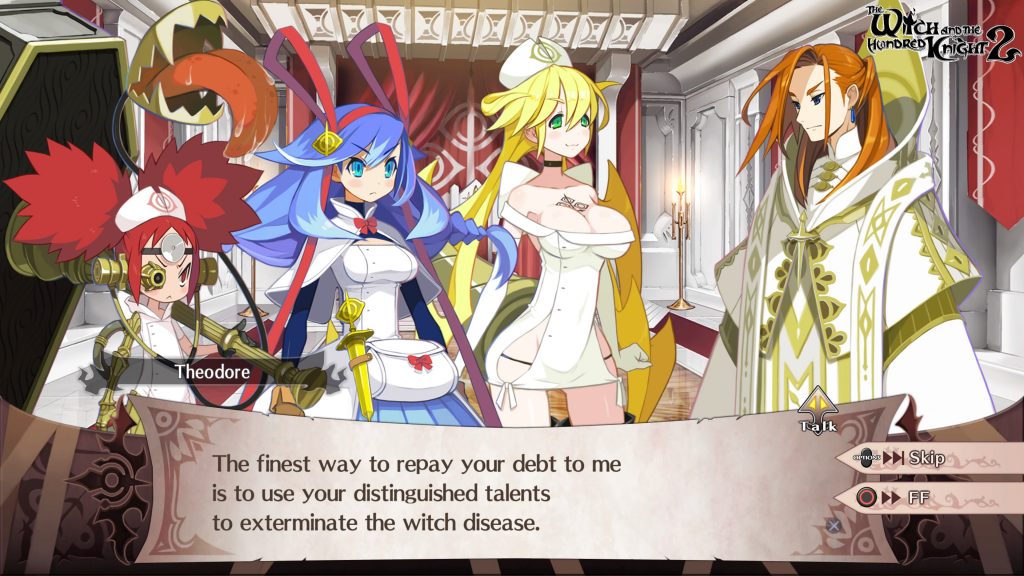 The characters are different, I should point out. You still control the Hundred Knight, but this time you follow two sisters, Amalie and Milm. Milm goes missing early on and upon her return has the Witch’s Disease which means an eye has begun forming on her forehead. Rather than have her sister killed to prevent her transformation Amalie leaves town with Milm to live in exile. The story then skips ahead to Milm being treated in a lab by the Weisse Ritter, an organisation that fights witches and the Witch’s Disease. The surgery goes wrong however and Milm becomes awakened, with Chelka the witch coming forth. It’s then that Milm’s doll is given life and becomes the Hundred Knight.

The story follows the characters as Amalie tries to juggle her work for the Weisse Ritter whilst hiding Milm and Chelka, who are battling for control of Milm’s body, and the Hundred Knight. The story isn’t that great in all honesty, for the amount of cutscenes there are things don’t get interesting and whatever you thought about Metallia from the first game, at least she was interesting. The character design and voice acting are top notch again if you enjoy anime voice work and the visual style but the characters they portray are predictable.

When in control of the Hundred Knight things will be very familiar for those that played the first game. You run around hacking at enemies using

, picking up loot and heading towards the exclamation point on the map. Diablo is still the best comparison, but if you imagine that moved about ten times as slow. The camera feels a little closer in this time, viewed from a slight angle and being built for the PS4 (the last game was a PS3 game ported over) the 3D detail has improved, although that does mean the screen looks busier overall. The UI also seems to get in the way more often, with a lot of screen real estate taken up anyway, but when numbers and ‘Effective’ start popping off enemies as you hit them the screen can become difficult to read. 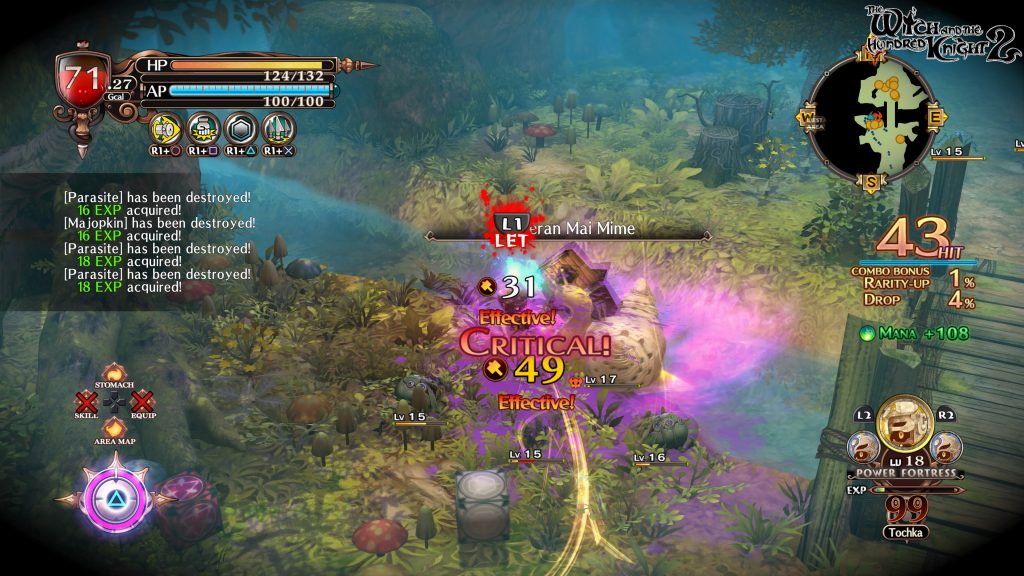 Again you can equip five weapons in order to have a five hit combo, with weapons coming in Slash, Blunt or Magic variety. Each enemy type has a weakness, generally only one, so you’ll want to use the right weapon on the right enemy to defeat them as quickly as possible. As you progress you’ll unlock facets and you can equip three at once which you can switch between with

. These each have their own equipment meaning you can have three loadouts, so a Slash, Blunt and Magic one for example. Each facet also has its benefits and weaknesses, whether it’s high defence but weak magic defence, vice versa or maybe it increases critical chance. Also within these facets are passive buffs and specials which take AP to cast that you can level up. Using the right facet for your play style or what you’re fighting is important and will make things easier.

You still have a Giga Calorie meter that constantly falls as you explore which I didn’t think added anything before and still don’t. The meter counts down from one hundred no matter what and the majority of actions you perform will also cost Giga Calories. If you get hit your health will replenish at the cost of Giga Calories, if you dodge or sprint it costs Giga Calories. Run out of Giga Calories and Hundred Knight becomes weak in both attack and defence and your health ticks down. Die in this state and you’ll lose all the items you’ve acquired on that run (held in Hundred Knight’s stomach and can’t be accessed until you return to base), whereas if you die with Giga Calories still remaining then your health will be restored and you’ll lose only a few items. Generally speaking if I was running low then I’d sprint past all the enemies to get to the next warp point and return to base, restoring all my ‘G-Cal’ and banking my items before returning and continuing where I left off. The only time it became a real pain was when I was fighting a particular boss that took so long to beat that my Giga Calories were becoming an issue. 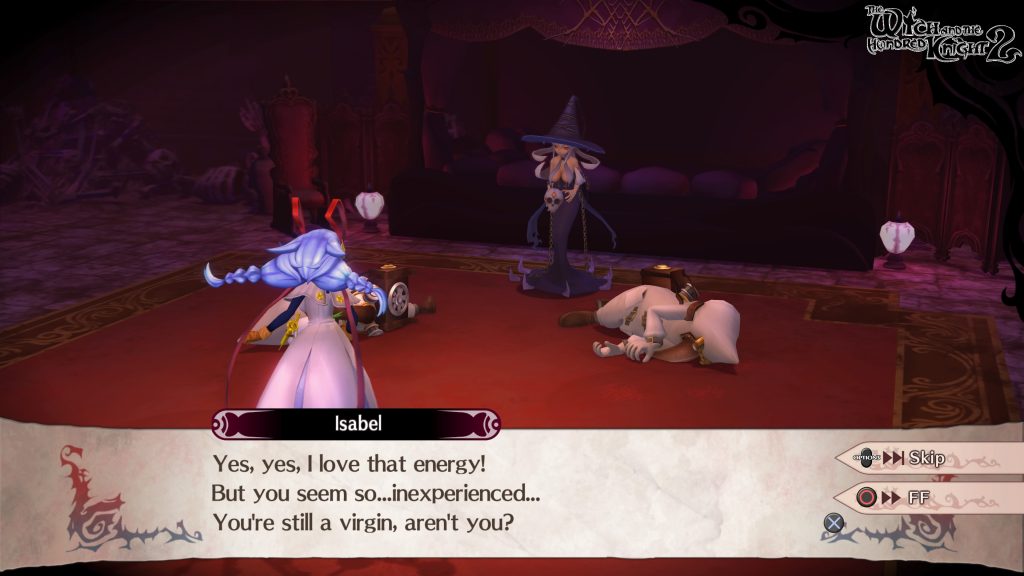 There have been some changes, but mostly just removing stuff that existed in the original. You can’t power up Hundred Knight whilst he’s in a dungeon any more so there is no reason to stay longer than is safe. Dungeons are randomly generated now so there’s no optional areas to return to later on with new abilities to access special chests and there’s no point trying to go for 100% as when you re-enter an area it will be reset to a different layout. There’s little interaction with villagers this time and although I didn’t find ‘Witch Domination’ to be a massive part of the first game it’s another thing that has been removed. I actually thought the original had too much going on which was poorly explained and unnecessary, but I also thought the basic gameplay needed more attention and they still haven’t provided that here.

Exploring the dungeons is dull. You’ll see the same sections of map over and over thanks to the randomly generated nature and you’ll be sick of forest areas very quickly. Normal forest, poison forest, slightly darker forest, snow forest. Wow, so much variety. The enemies repeat in a similar fashion and if you’ve played the first game then they’ll be even more familiar. The slow pace of the combat which requires little actual skill drains any enthusiasm you may have to explore and if it wasn’t for the fact that you need to level to make a dent on the bosses then running past all the basic enemies would be preferable and is easily done. 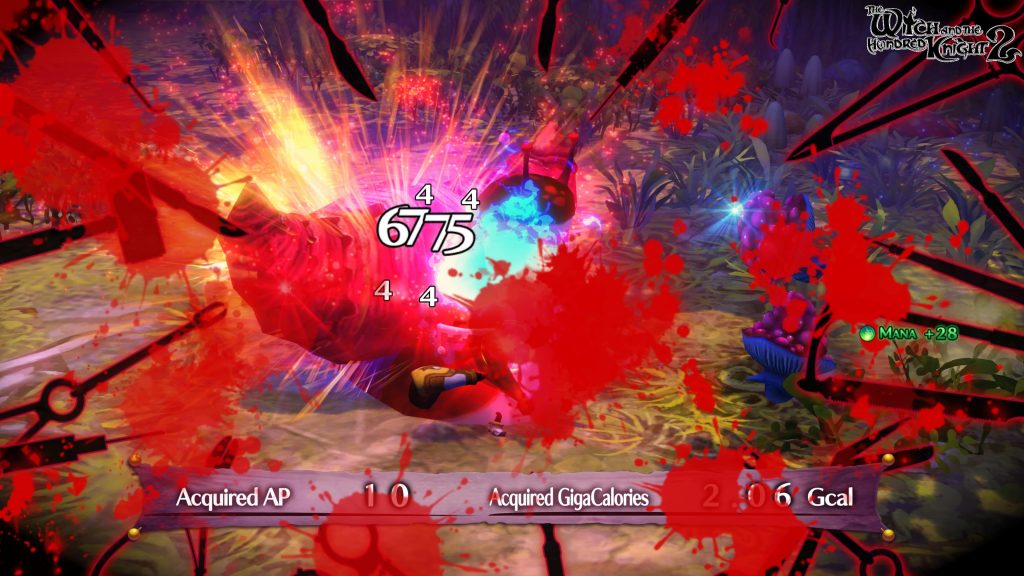 So the story and characters aren’t great, the exploration isn’t great, and the combat isn’t great. Those are the three elements that make up The Witch and the Hundred Knight 2 and they all suffer from being uninteresting and boring. The original felt far too long for the variety on offer but it obviously did more than this judging by my review, though this game is so incredibly similar that I’m wondering if that is the case, I’m struggling to remember or differentiate the two. If you enjoyed the original more than me then maybe, just maybe you’ll find some fun here too, but those looking for an improved experience should stay away. It’s more of the same, maybe worse, or maybe it’s just the repetitive nature of the games making me less lenient this time around.

The Witch and the Hundred Knight 2
5 Overall
Pros
+ 2D character portraits are great
+ Music is still good
+ Lots of loot to collect and upgrade
Cons
- No improvements over the first game
- Dull exploration and combat
- Story isn't very interesting
Summary
The Witch and the Hundred Knight 2 is more of the same. The original was already pretty repetitive so to do the same thing over with less interesting characters, randomised dungeons and less gameplay distractions is a big ask. There may be something here for major fans of the first title but if you're looking for improvements then you'll be massively disappointed.