We Were Here Together is the third game in a series of puzzle games from Dutch coding crew Total Mayhem.  The first in the series, We Were Here, was released for free on PSN as an introduction to the series.  We’ve not seen We Were Here Too yet but these games aren’t hugely loaded with storylines and so you can pretty much jump in wherever you want.  That said, the first game is worth a look as it introduces the concepts and basic mechanics of the series.

As with that game, We Were Here Together is an online-only co-op puzzle game.  In the first game you, and your co-op partner, played as explorers in the snow who come across a castle full of puzzles where they get trapped.  In this game you both start off in a research station in an Arctic looking location where you’ll pick up a radio signal asking for help.  That will lead you to another castle where you’ll face another series of puzzles.

Where the first game had the players split between two roles – one of you doing the exploring while the other is in a library guiding them – this one has you together at first before being split up.  You both be exploring in this one, usually in rooms that are thematically linked, in a series of relatively small areas. 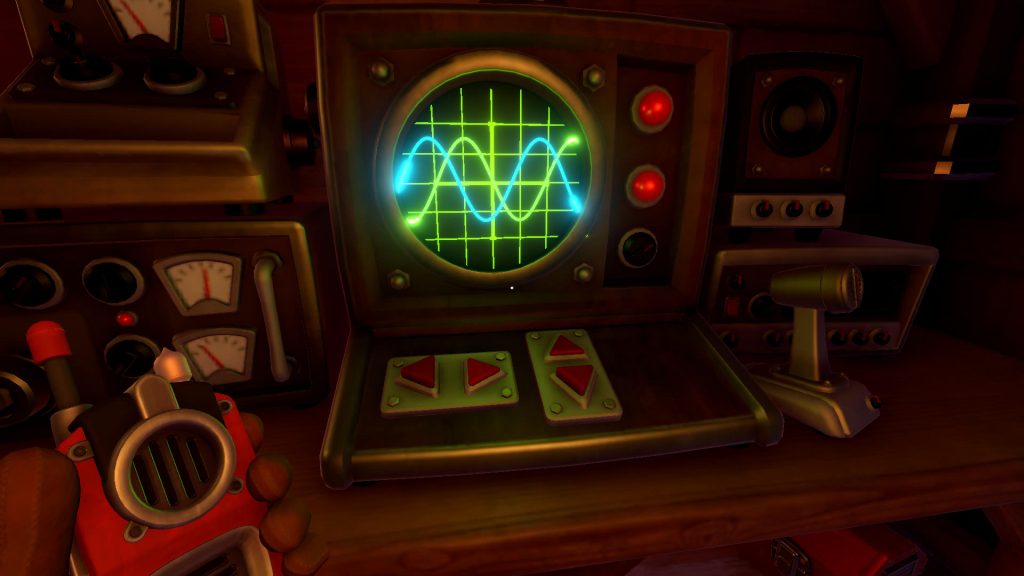 As with We Were Here, the game has a simple control system with your players being able to walk, run, jump (for pretty much no reason) and crouch (for no reason at all) as well as being able to interact with the various puzzles.  The game’s main menu isn’t quite as terrible as the first game’s (one of the worst menu systems we’ve seen) but still feels like it was taken, unoptimised, from the PC version.  Starting the game means hosting or joining an online game either with a friend or a random.  Quick bit of advice:  go with a friend.  One that you have a very good relationship with otherwise it will be tested.  If you play this with a random you’ll want to kill them and then yourself.

The game uses the same communication system as before.  You need to hold

to talk, via a walky-talky system, which means only one of you can talk at a time and you’ll need to say ‘over’ a lot.  For the love of whatever god you hold most dear, sack this off immediately.  It’s clunky and unnecessary and just not robust enough for the sort of conversations you need to have with this game.  Get on Party Chat and save yourself a whole heap of pain. 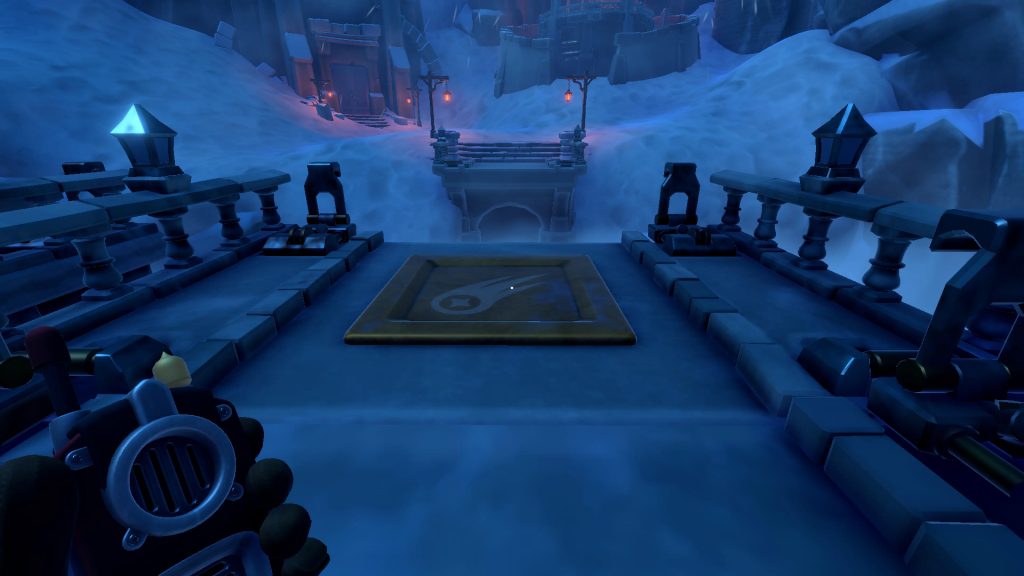 This game is pretty much only as good as its puzzles though and with ten chapters, most of which just having one puzzle, our opinion really ebbed and flowed with how these went.  Some were reasonably gentle and enjoyable to solve.  Some were a bit trickier and therefore more rewarding.  Others?  We’ll get to that.  The first chapter has four puzzles and you’re together (as per the game’s name) in your research station.  This is nice and sets up a different, but familiar, feel if you’ve played the first game.  It feels the same but you’re not as isolated.  None of the puzzles are too taxing but do require you to search the area and work together.  So far so good.

The next chapter (The Wall) had us pulling our hair out.  It’s an easy enough puzzle to understand involving lifts and switches but with each lift having two or more states while also controlling another lift at the same time, it all just feels like a very fiddly thing.  Communication is paramount as you can’t see what your partner is seeing but after an hour of that nonsense we were ready to quit.  It’s not a clever puzzle but it is cumbersome and in this engine (which isn’t the fastest or slickest), the whole thing feels like a chore. 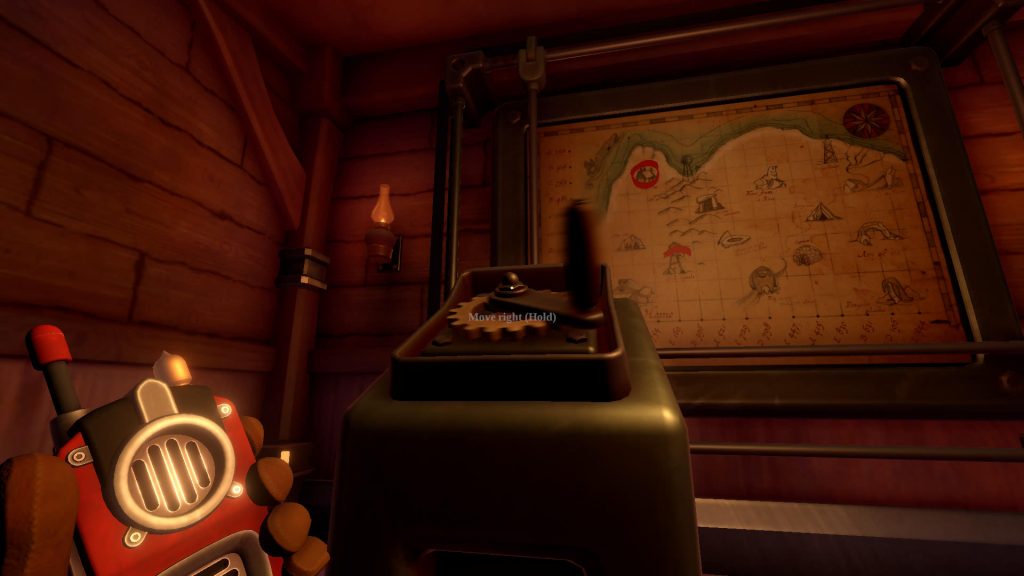 The next chapter (Frozen Tracks) works on a similar basis with each player manipulating switches to open and close gates.  Again, it’s not very clever.   This switch opens this but closes that, so how do we both get through the area?  You’ll get there but it’s not really any fun at all.  While the next chapter (Misty Valley) sets up a problem that reoccurs a lot as it feels like one player is doing all the work while the other is just watching.  Both these chapters also feel entirely unnecessary, like the world has no reason to be the way it is.

Chapter Five (Two Paths) is okay with both players working together at consoles to solve a puzzle.  This feels a bit better as it’s all about co-operation and communication without being too fiddly or obtuse while Chapter Six (Strange Encounters) has a slightly frustrating electricity puzzle where the game does this annoying thing of relying on communication but not making it very clear what you are seeing.  One player is working with a mechanism while being guided by the other but that player is relying on fairly confusing information.  Doing this with the R1 button would be horrific too. 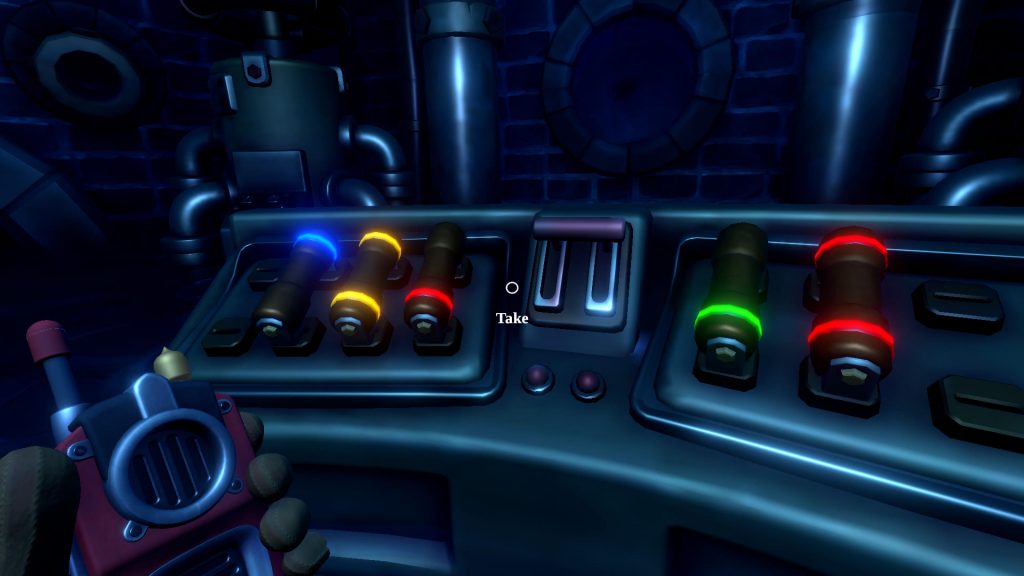 The next chapter (Overgrown) has three puzzles.  All of which are fairly horrible.  The least unintuitive pipe puzzle which is like Pipemania (or the hacking bits in Bioshock) but played on two different screens, a fountain puzzle where one of you is really doing all the heavy lifting on a puzzle that probably works great with a mouse and cursor but much less so on a joypad and a gardening puzzle that is just far too clumsy and visually ambiguous to really be any fun at all.  That last puzzle was where we called in a day for our first session because I, frankly, couldn’t face another second of it.

Chapter Eight (Hidden Answers) was better.  A series of puzzles that rely on you and your partner figuring out the differences in your play areas and using those as the basis for solving the various object-based puzzles.  This one was overly long but fairly unambiguous.  We were back on track but all time happier that this would soon be over rather than just enjoying the game on its merits.

The next chapter (9 – The Soulstone) is responsible for at least one missing point in our overall score.  The puzzle is a prime example of We Were Here Together‘s worst qualities.  It relies on communication but makes that communication as difficult as possible with items having faux Latin names that are lengthy, complicated and deliberately similar.  The other player has abbreviations that form a big part of the solution but these are in a font where certain letters can be read in a couple of ways (Ls and Cs for example).  And the action solution is needlessly difficult as well.  Add to that the game’s communication system and controls (again) and we were ready to sack the game clean off. 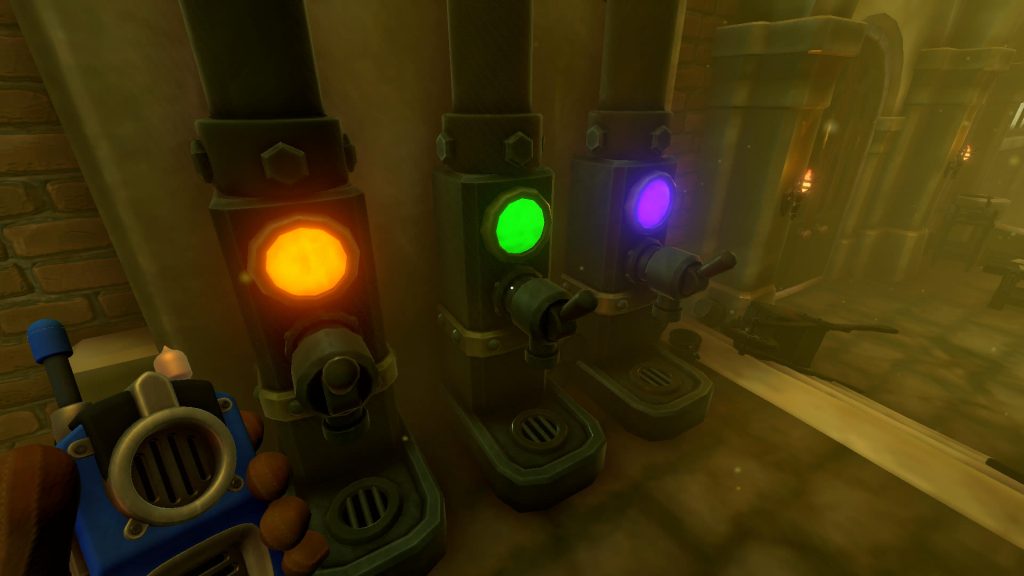 Chapter 10 is the last one and has two puzzles.  The first involves you rotating statues but the game gives you very little information to work with and actually gives you wrong information (in terms of some colours that you use to identify the statues) which feels needlessly mean.  By this point we were fully out of patience for the game and its obtuse ways and this puzzle just had us feeling weary.  It is short though, as is the chapter’s (and game’s) final puzzle which is a fairly gentle logic problem that we didn’t hate.  What we did hate though was the fact that this chapter kept disconnecting us.  It wasn’t an internet problem (we were on Party Chat which stayed connected for the duration).

So, overall we just didn’t really have much fun with most of the game.  Aside from the often unintuitive puzzling, the game feels like an Xbox 360 era indie game both in terms of its clunky interface, basic presentation and how you interact with the world around you.  Apart from objects that are specifically part of the puzzle, you can’t move anything.  You don’t feel connected to a real world but rather an area of rock solid assets where a teetering pile of books is actually as rock solid as a wall.  And the game’s dark and dreary visuals aren’t very attractive or inspiring either. 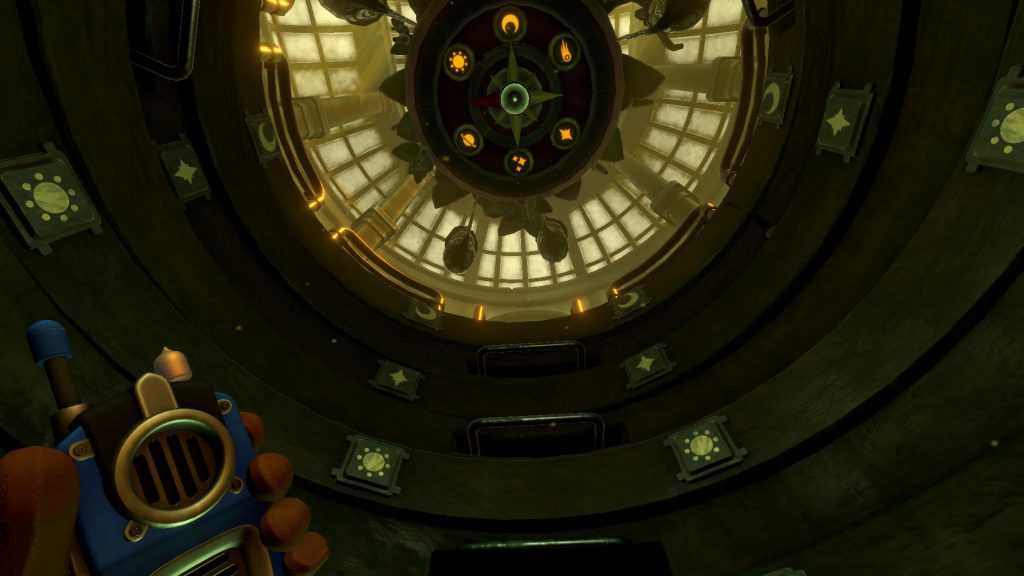 As with the first game, We Were Here Together feels like what it is.  An unoptimised port of a cheap PC game rather than feeling like a console experience at all.  The basic concept of two players working together to describe and solve puzzles is still a good idea but the game isn’t designed well enough to make you feel like you are both contributing all the time and has a way of making it feel like one player is doing all the work.  If these puzzles were in a slicker engine they’d still need a lot of optimisation to actually be fun especially when the game is so keen to make the visual information that you rely on so ambiguous at times.

Where We Were Here was a basic game with a good idea, this is what happens when you take that idea too far.  The game’s credits list a large number of testers but they all appear to be users rather than professionals (based on them all being credited under their forum names) and really what this game needed is for well-skilled testers who were detached enough to say ‘yes, but is this fun?’ as often it just isn’t.

The game did well with reviewers on its PC release in 2019 and we can imagine the game being a bit better with a mouse and keyboard set up (and of course you are just an ALT+Tab away from being able to check a walkthrough if needed) but on a console it is a clunky, frustrating experience.  But if you’re very much into your puzzle games, and have a like-minded co-op buddy, then your brain is sure to enjoy the dopamine hit that will come from solving We Were Here Together‘s puzzles.

We Were Here Together
5 Overall
Pros
+ Some of the puzzles are okay
+ It can be rewarding when you execute a solution (but often just feels like relief that it's over)
+ Each character gets a different experience
Cons
- Often frustrating and ambiguous
- Dated visuals
- Not optimised for consoles
- Prone to disconnections
- You're not actually together for very long
- Workloads don't feel equitable
Summary
We Were Here Together's basic idea of co-operation and communication is sound but the game's basic presentation, occasional tech issues and needlessly obtuse puzzles mean it often feels like a chore rather than any sort of fun. We liked what it was trying to do but ultimately resented how it did it.