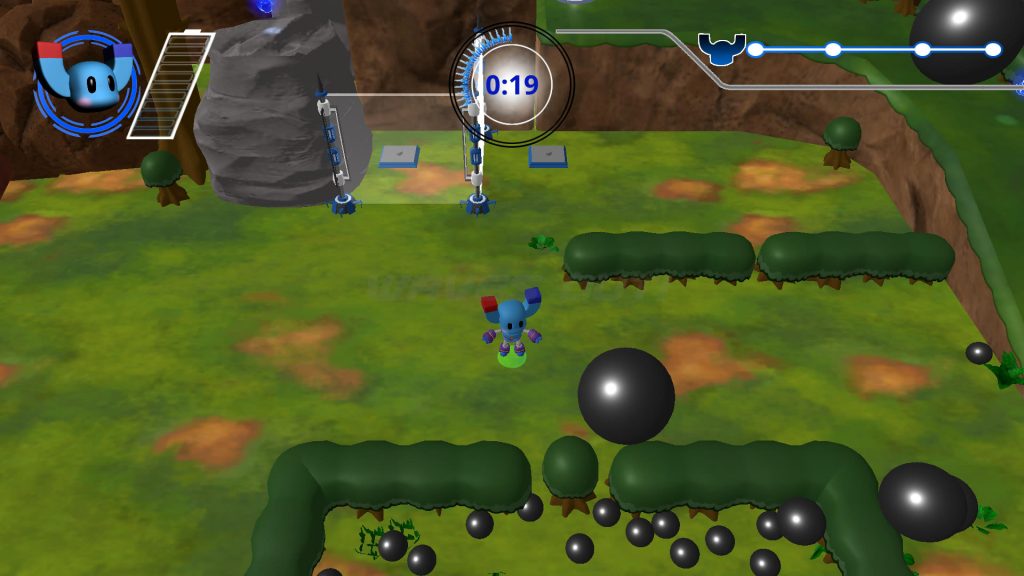 Here at PlayStation Country, we love Indie games. Without tooting our own horns too much, a vast amount of our review content is derived from these lesser ventured games, from lesser known developers. There is usually a lot to love about these titles as Indie game developers can venture into territory that just doesn’t get covered by the AAA, whether that be with retro gaming spiritual successors, thoughtful non-game like exploration titles or overtly hardcore, niche titles and more.

As it turns out, the folks at Sony Computer Entertainment Spain also love Indie games. As a result of this, they have created the PlayStation Talents label, a transparent and welcome attempt to bring Indie titles to the fore, with financial backing that has resulted in some interesting titles, such as the recently reviewed Windfolk and a few others on the way. Waves Out! Is another title to be released under the PlayStation Talents label and while again, the approach and support of indie games is appreciated and welcome. This is where I become a bit less complimentary. 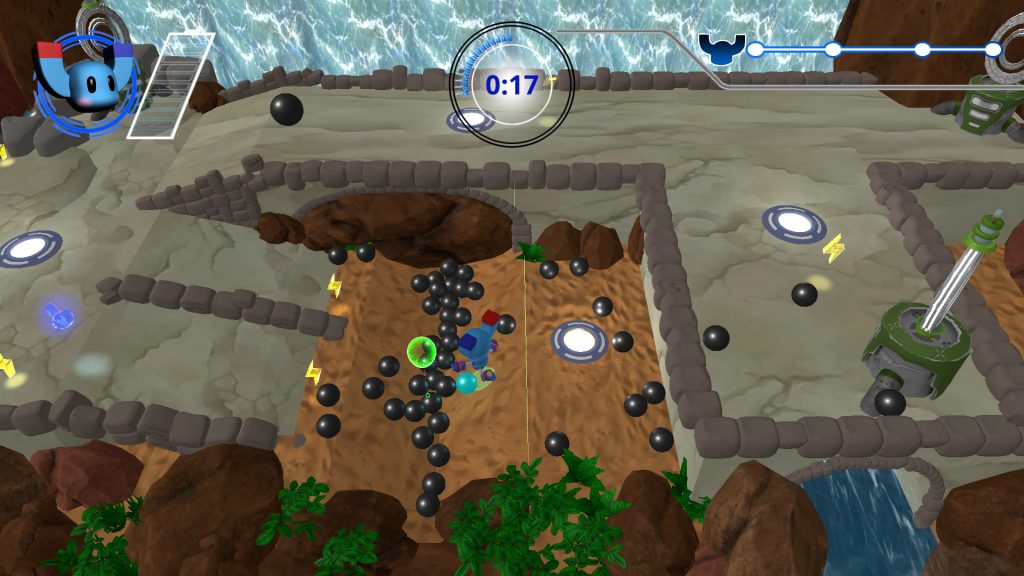 Waves Out! Is a relatively rudimentary game that has you playing as the diminutive Magnetin, a chibi robotic looking character that more than resembles the likes of Bomberman. As this character, the job is simple. Use your magnetic abilities to round up balls, changing them to your colour and depositing them into score holes which are dotted around the diorama like arenas. Barring the few obstacles that are dotted in for flavour on some stages, that is the game, with no variance to the proceedings throughout.

The base of the game is simple, which you would expect from the self-proclaimed “party game” moniker, however there is an unwelcoming complexity when you dig into the controls. To collect balls in the arena, your character must touch them physically to change them to your colour and then by holding R1, you use your magnetic charge to walk them to one of the goals. The problem with this is that the magnetic charge is finite and often runs out before you get even halfway to your destination, resulting in an awkward pause while your character jitters on the spot thanks to overcharge. 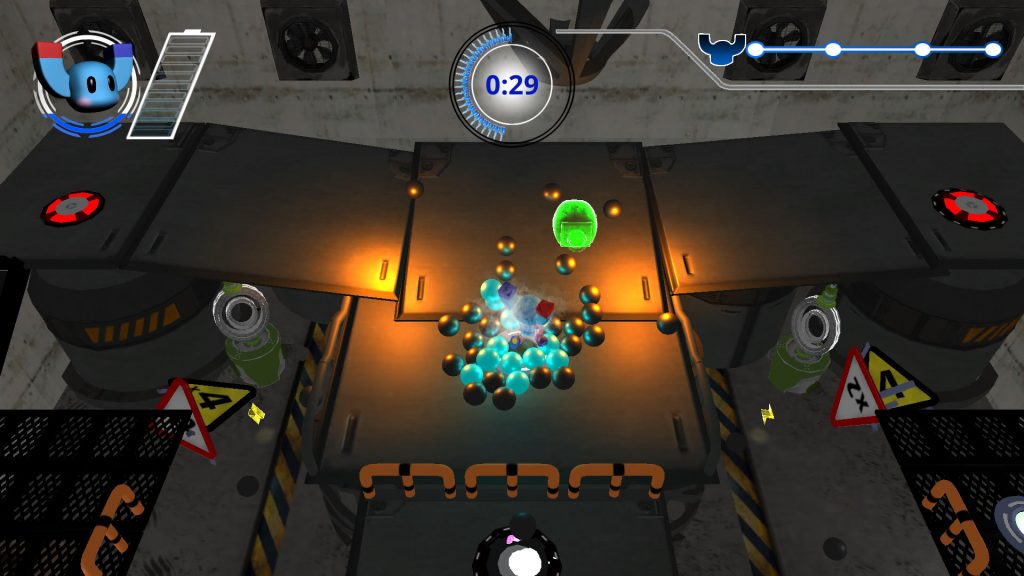 This jittering animation becomes a constant annoyance, especially when dealing with slightly more complex levels that require timing to get balls over an uphill slope, often resulting in the animation and the balls falling back down and sending you back to square one. This is even more painful when encountering a level early on in the single player mode, which relies on getting a number of balls in the hole before a timer runs out, but presents you with a slope and a floating platform to contend with. This level in presented an unusually steep difficulty spike which made me consider whether I would be able to get far enough in the game to review it as it seemed to require more dexterity than I could personally muster (thankfully I got through though). Not only this, but the game physics didn’t seem to agree with any of my pre-conceived notions of how gravity or collision works, making me feel that even if I could perform all of the tasks, the game itself would roll the dice on whether my efforts were in vain or not.

Beyond this level, things got much easier. I naturally picked up a better understanding of the movement with Magnetin and was able to push through the rest of the single player with little challenge whatsoever. In fact, some of these levels were so easy, I was racking up score’s way in excess of the three-star challenge goals that were set, perfectly demonstrating the imbalance of the whole thing. 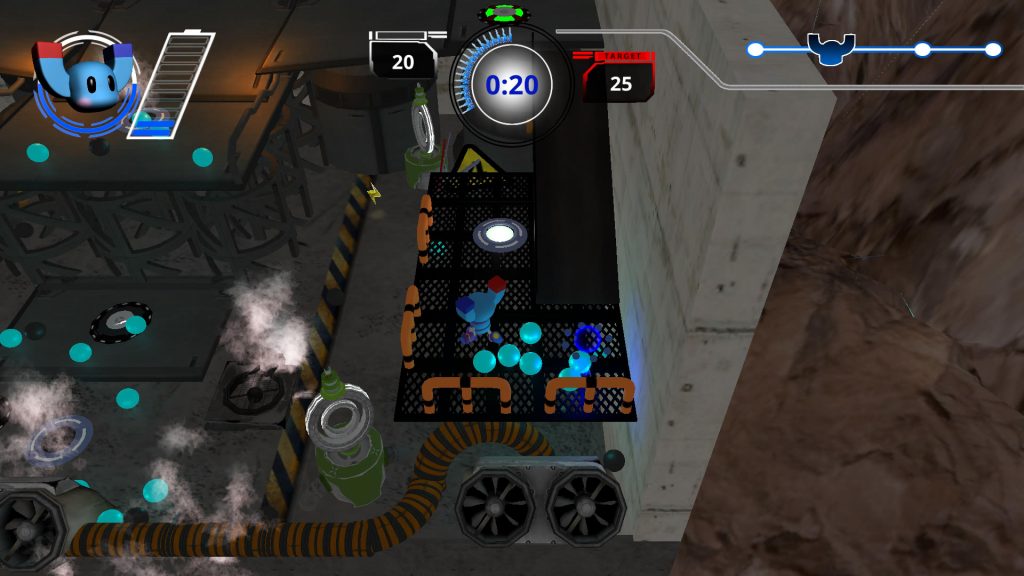 With the above in mind, Waves Out! Is clearly designed with the party aspect in mind. However, even then, it doesn’t seem to be a good fit for this either. The controls aside, you can only play this game 1v1 and across the same levels that have already been seen in the single player mode. There is a bit of fun to be had in trying to gain more balls than your opponent and using the odd power-up to disrupt your foe, but again, there is no variation here. When you realise that some levels are stacked against one of the players due to the score hole placement or the location in which balls spawn (some directly over one player’s location, situated over a goal) then things get tiresome quickly. This is before we even consider the poor collision, bad physics, and bland design overall.

The only saving grace as far as I am concerned is something that a lot of people may also consider a poor aspect of the experience. Waves Out! Has a bit of that nostalgic presentation flair for me, as someone who has grown up with countless early 3D titles from the likes of Sega and Hudson Soft, I quite like the general aesthetic. Even then, I would be the first to admit that this whole design ethic, from the overly simplistic characters to the dreadful, repetitive beatboxed soundtrack is dated. This is not that charming Bomberman 64 style dated, but more of a Net Yaroze magazine demo disc kind of way.

Waves Out!
2 Overall
Pros
+ Evokes some of that late 90s Hudson soft aesthetic quality
+ The single player mode is over quickly.
Cons
- Completely vacant single player mode, devoid of any meaningful content
- Not intuitive enough to be considered a pickup and play party game
- Local multiplayer only
- Annoyingly repetitive, dated presentation and soundtrack
Summary
Waves Out! Tries to evoke a sense of nostalgia with its simplistic party game concept and retro visuals, but just ends up feeling dated. The single player is vacant of challenge or ideas and the multiplayer doesn’t fare much better. One to miss.