It’s another day in the visual novel dungeon and this time Vera Blanc: Ghost in the Castle is my quarry. Ian reviewed Winter Wolves’ last effort Full Moon back in November, to be honest, not much has changed. Our titular heroine is back in the mood for some paranormal investigating. There is a ghost. There is a castle but is there much of a game here? 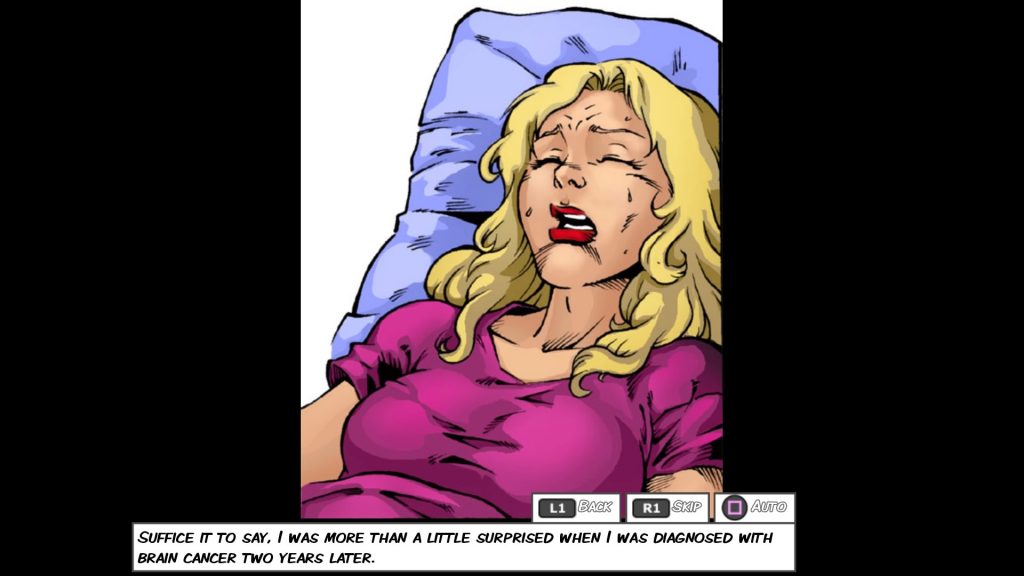 In short, it takes the usual visual novel format. What separates these stories from the genre a little is a decent comic book presentation. I’ve never been enamoured with how visual novels tend to linger on portraits, use the same recycled backgrounds and generally fail to capitalise on a visual medium. With the comic panels, Vera Blanc:  Ghost in the Castle manages to give me something to look at and scenes change fairly regularly.

It’s a shame the visuals struggle to find consistency. From page to page, Vera can look like different women and it can feel like artists are being tagged in for each panel. Sometimes the results are striking, sometimes they look amateurish and it can undermine the strongest thing this series has going for it.

Gameplay does at least try to buck the trend. You can play this like a traditional page turner but the inclusion of minigames do give the player something to do besides reading. These diversions remain the same as Vera’s last outing. As a psychic, she can read people’s mind and this brings you to a simple game of hangman. Guess the letters, reveal the phrase and the game continues. It’s not taxing and it does give you something to do. It’s fairly inoffensive and fits Vera’s character and profession. 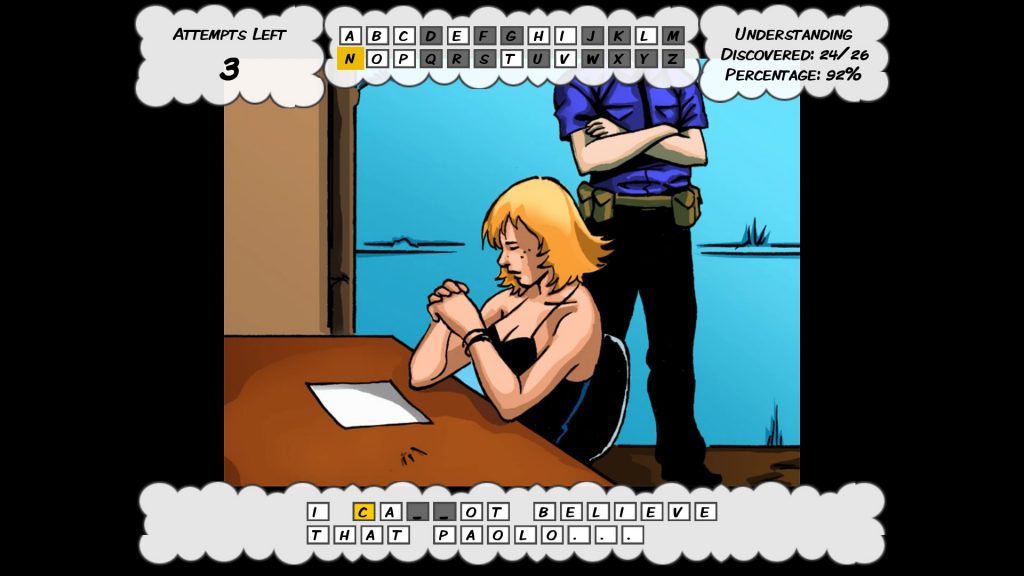 The other two types of minigame struggle to find the same comfort zone. Some scenes will ask you to spot the difference between two images. Initially, it’s not straining on the eyes but, the more I do, the more I realise the differences amount to misplaced brushstrokes. They’re placed in the story at fairly pivotal times but I’d rather the game cut to the chase and had me do some light investigation work. I guess you could say this feels forensic but I feel like it lacks focus. The final of these games are simple memory tests and they’re usually deployed in chase sequences. I could do without it and the fact you can scrub backwards through panels means there’s no threat of failure.

Playing with them gives you some light interaction but playing without them really helps keep the pace up. This time around, the narrative actually feels somewhat layered. Vera and her bodyguard are in Italy to investigate a haunted castle. This involves talking to locals, looking up any potential leads and discovering any new locations and places of interest. 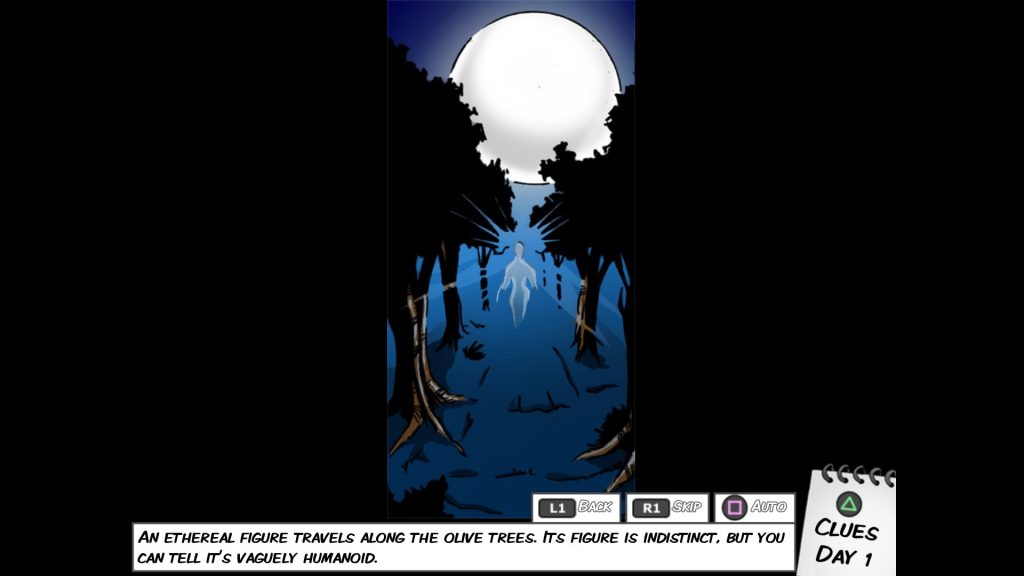 After an initial introduction, you can move around town and question people for clues. The game will keep track and it’s nice to see the information on each character build as time goes on. There’s some intrigue, murder and plenty of dots to be connected in a narrative that was surprisingly well held together.

Vera acts a strong independent type but it does seem this Italian town has been inhabited by perverts. Several male characters comment on her beauty to her face. It’s not something that’s limited to Vera but it seems all the female cast are ogled by their male counterparts in a very open way. It’s an odd thing to read in an otherwise decent tale. There’s plenty of twists and when it wraps up it makes a semblance of sense.

One thing I feel Vera Blanc: Ghost of the Castle lacks is a few more branching paths. I’ve stumbled into a few bad endings but, in terms of branching dialogues, it doesn’t offer much. There is one conversation near the climax that has some stakes to it but I never felt like I was conducting a cross examination or really interrogating a witness. 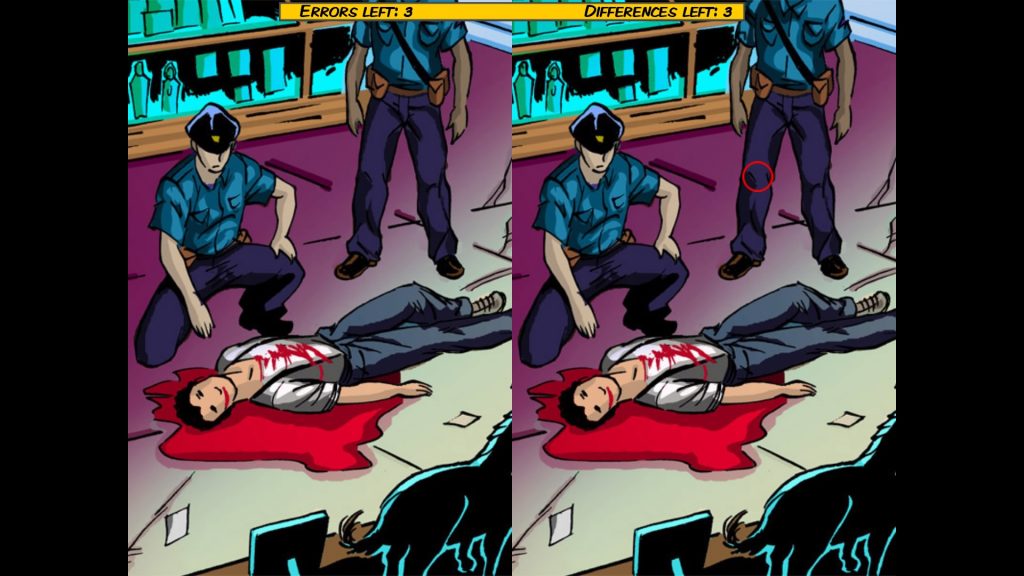 Lastly, I felt the music in this game was sporadically used. None of the soundtrack particularly stood out but I definitely missed its presence. It leads to some panels being read in silence and takes away from the otherwise competent presentation. I do find the mind reading theme to be appropriately droning but the rest kind of vanishes into forgetfulness.

There’s not a lot else to say about Vera Blanc: Ghost in the Castle. The story itself is enjoyable and it doesn’t tend to linger and meander. There’s a nice pacing to it which the minigames have the potential to delay and derail. The comic book approach is novel but the art varies wildly in quality. As visual novels go, it’s one of the few I’ve enjoyed but its not a high bar to beat.

Vera Blanc: Ghost in the Castle
5 Overall
Pros
+ A surprisingly cohesive narrative.
+ The comic book presentation is interesting, if varying in quality.
+ The minigames do give players some interactivity.
+ Quickly paced, at times.
Cons
- Spot the difference games can become a real chore.
- The minigames don't always fit with Vera's job as a paranormal investigator.
- Music is used so sporadically some panels are read in silence.
- The art is wildly inconsistent from scene to scene.
Summary
Vera Blanc: Ghost in the Castle takes an interesting comic book style and combines it with a decent spooky tale. The art style is different but it struggles to maintain a consistent quality. The inclusion of minigames does give players some light interaction but it hampers the game's brisk pace. Being asked to spot minor differences can derail any tension. Without those games, it's a more standard visual novel experience.