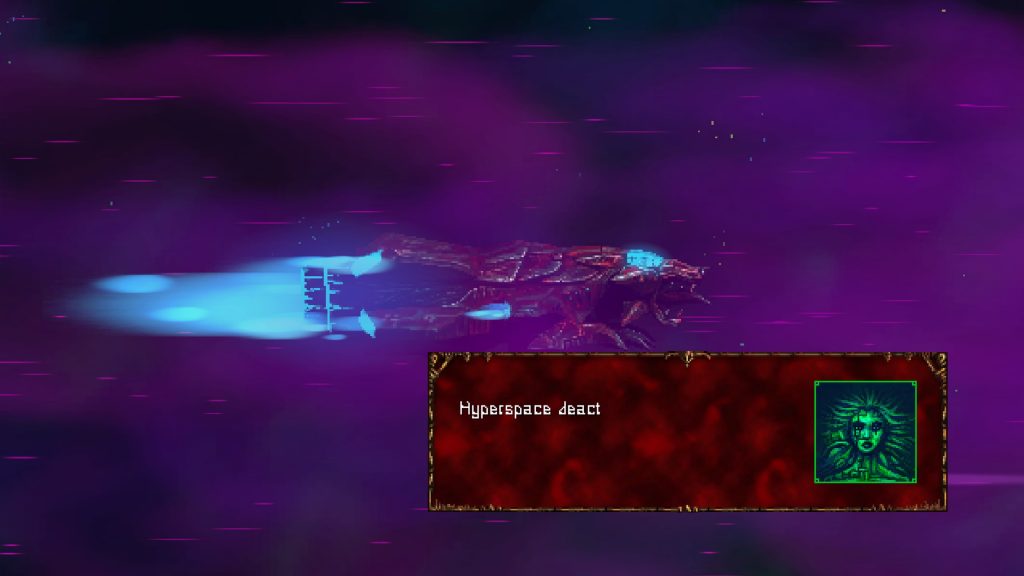 The psuedo 3D pixel visuals are a joy to behold.

Modern takes on retro are nothing new. The sheer amount of nostalgia baiting games these days is almost dizzying with hundreds of indie developers all vying to recreate the long, long ago of the 8 and 16-bit eras. As we know, there are more mediocre games than there are standouts that come to the fore, with most being focussed on the pixelated graphics, or the live systems that denote an arcade style challenge that frustrates more than tickles the nostalgia. Most of all, they all seem to have a gimmick, whether that be a special power that aids traversal or attack, a thematic thing that means the hero plays as a pong ball or just throwing sub-genres at a wall to see what sticks together.

Steel Mantis, the developers behind Slain and today’s game Valfaris have the tendency to throw the idea of this out of the window. Their games are less about what to do differently, instead they seem to focus more on utilising ideas from other games and melding them into an experience that gels together into something they call their own. Now, Slain: Back From Hell may not be the best example of this, but it clearly took its inspirations and turned them over into a good title that didn’t rely too heavily on devolving the experience for the sake of retro, instead it utilised a lack of retro limitations while maintaining the aesthetic and gameplay of a retro game to feel nostalgic, without feeling old. That’s a bloody hard thing to do. 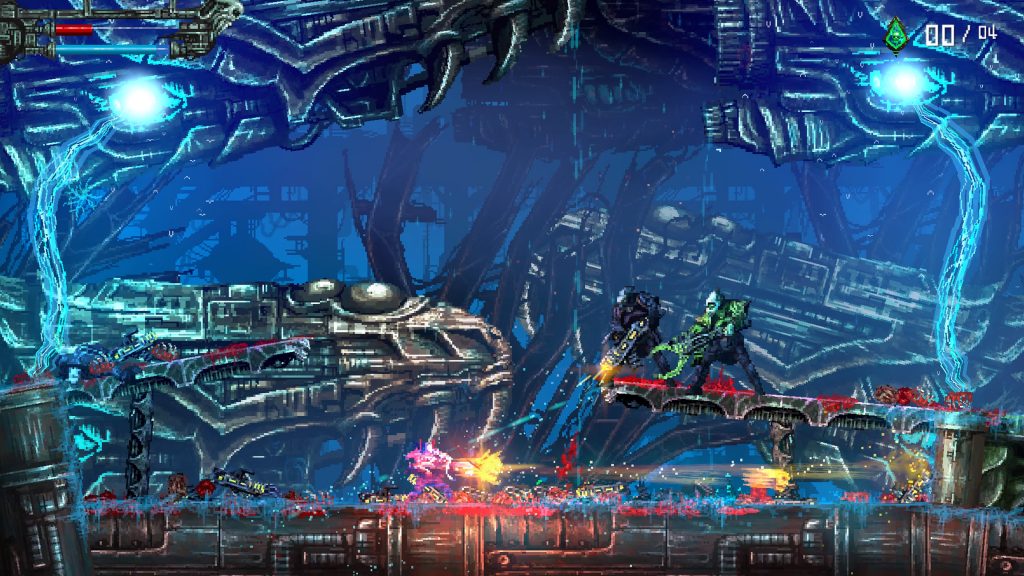 This screenshot only contains a very small percentage of the carnage that you will witness in Valfaris.

Taking its licks from critical reception, Steel Mantis have done a great job with the Valfaris, a follow up that removes the sword heavy action of Slain and places a gun in the hand of its protagonist. Therion, Son of the titular homeworld discovers that Valfaris has reappeared when roaming the stars, the world was previously a paradise but has now devolved into a macabre world infested with all manners of blood crazed creatures. In the game, Therion must get through ten stages to find his father, gutting and shooting everything in his path.

If you played Slain before this, then the aesthetic and themes won’t be alien to you. Valfaris takes on a stylistically heavy-metal approach to visuals, audio and general themes. Just about every area in the game could be slapped onto a Century Media records album cover, with a hint of a ‘far future’ aesthetic, like what has been seen with the likes of 2000AD and other comic book media. It’s an impressive mix of visuals and flare, with the grim dark themes occasionally making way for gratuitous violence and enemies that look like they have jumped straight from the pages of a comic book with colourful outlines and impressively out their design. 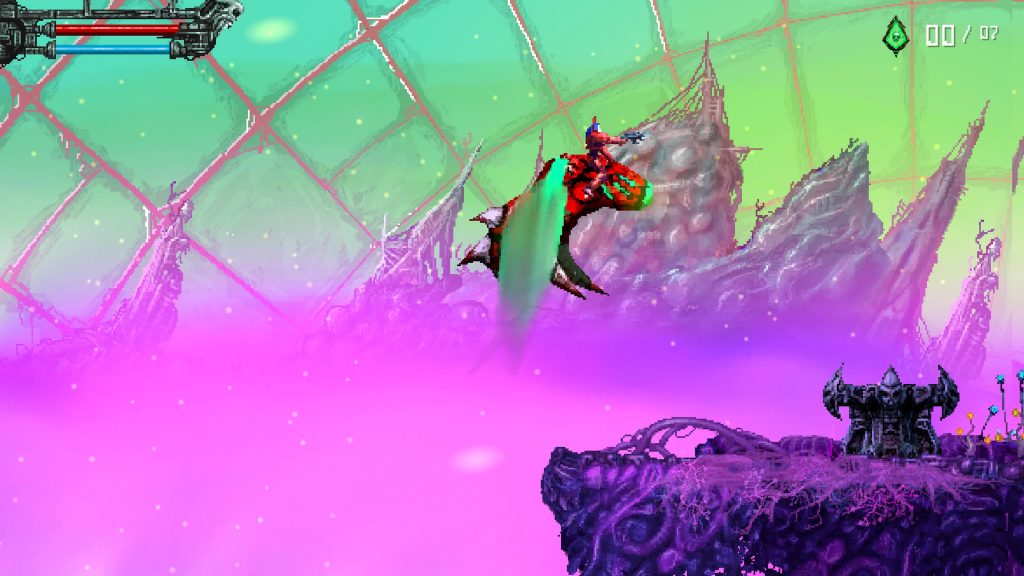 Making a boss your bitch is one of the clear highlights

Matching these heavy metal features is a similarly weighty gameplay style. Valfaris is one of those games where you must make deliberate and committed movements, lest you be punished for being cautious or overly trigger happy. It all comes down to the arsenal of weaponry and your loadout choices to make things work. You start off with a simple blaster at your side, a sword and a special weapon. The blaster is weak, scattering out simple shots that do-little damage, the first special weapon is a Gatling cannon that shreds enemies into mulch, but has a finite resource so you don’t get too comfortable relying on it and the sword changes everything. Not only a melee attack, it is your main method in which to regain energy which fuels not only your special weapons, but a barrier shield that can block and parry incoming melee and ranged projectiles. To succeed, you need to find a good balance between using all three attack types, your shield, all while maintaining your energy levels so you don’t end up short on an attack or deflection that will keep you in the game.

Where I say there is a choice, I mean there is a lot of choice here. Every level has multiple sections and a good portion of those sections yields a weapon or two for you to pick up and use against the ever-increasing hordes of enemies you meet. By the time you get through the opening two stages, you already have multiple pages of weapons, ranging from homing rocket launchers, long-range machine-gun pistols, life sucking tentacle guns and even a jelly whip (which is more funny than useful I guess). Once or if you find a loadout you like, you can then upgrade the weapons further to increase the power, range or number of projectiles a gun can spew. This is achieved by finding blood metal, which is littered around the landscape, either being held by especially tough enemies or just in hard to reach areas that can only be found with exploration. It’s a simple idea executed well and there is a lot of incentive to collect more blood metal so you can increase your loadout potential thanks to the multitude of weapons that you find lying around. 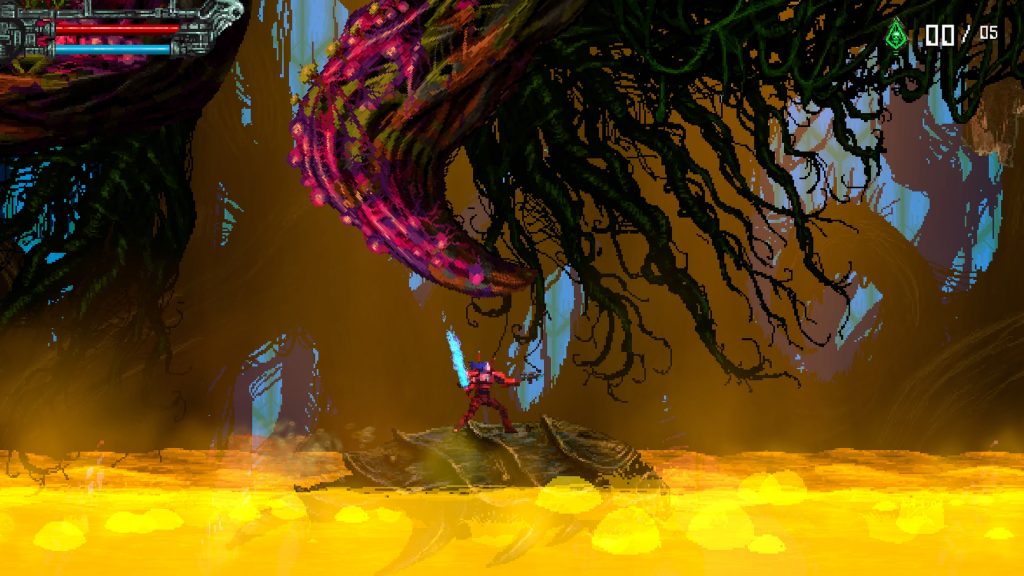 Retro tropes come in many forms. This one is the ‘surfing autoscroller’. You know the one.

Another way to gain this blood metal is through another simple idea. Throughout your journey you will encounter glowing green resurrection idols that both act as your only means to open checkpoints, but also as a currency when used with certain stage elements. This introduces an added layer of risk/reward to the game that I found pretty clever as it genuinely made me wonder whether I could skip a checkpoint in favour of getting an upgrade to my favourite weapon, or to risk running into a boss creature that will surely take a few goes to beat. An additional layer is brought on with the idea that if you exceed the maximum idol carry capacity, then it will instead convert to a larger health or energy pool, something that anyone would enjoy in a game as brutal as this. The choice is up to the player and that is something that is truly rare in games of this ilk.

Brutality is certainly the word to describe this game at times. Encountering a boss creature or gauntlet can not only test the dexterity of the player, but also the controller as it comes frustratingly close to snapping point at times. Certain boss characters that I encountered took a fair few goes to get down as I learned their attack patterns. The sense of satisfaction of beating a creature ten times the size of you is always a good feeling, but Valfaris takes that further, perhaps a bit too far sometimes, especially when you know exactly what to do, but you are bumped off by the rare mechanic that you couldn’t see because of the sheer amount of carnage on screen. 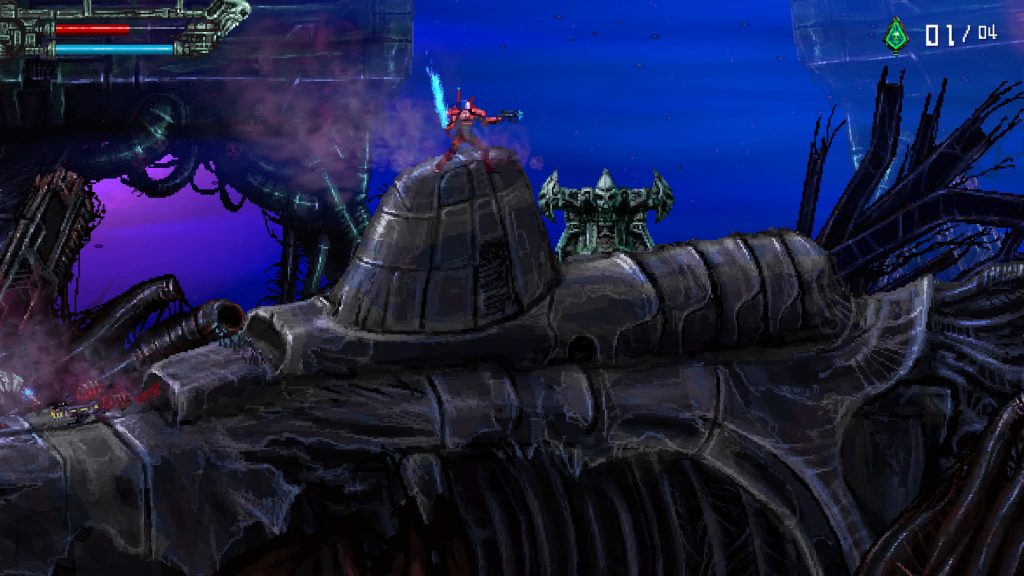 There are few locales and backgrounds in Valfaris that wouldn’t make for a good metal album cover.

Much like Slain, there are still those moments where the fun from the game can sap away in an instant, but rarely did I feel like I couldn’t continue or didn’t want to get better and plough forward. The game was just so damn enjoyable to quit. While it won’t necessarily push everyone’s buttons, particularly those who like happy-go-lucky adventures about feelings who listen only to techno and nothing else. For those who like a challenging, heavy metal inspired title that could easily be a comic from the 90’s, this is a damned good game.

Valfaris
8 Overall
Pros
+ Unrelenting themes and action, not seen since the 90’s
+ A doom metal soundtrack that hits all the right notes
+ Consistently keeps things fresh with new weapons and locales
+ Very challenging in a good way
Cons
- Occasional section that gets on the nerves
- Frequently respawning enemies in certain places
- Infrequently imprecise controls
Summary
To just say ‘this game is fun’ would be the easy way out. It’s a brutal challenge with hellish visuals, doom-laden soundtrack and blood-soaked anarchy. If you like your retro shooter platformers to look, act and feel like they belong in the metal section of your local record store, then Valfaris is one hell of a good time.