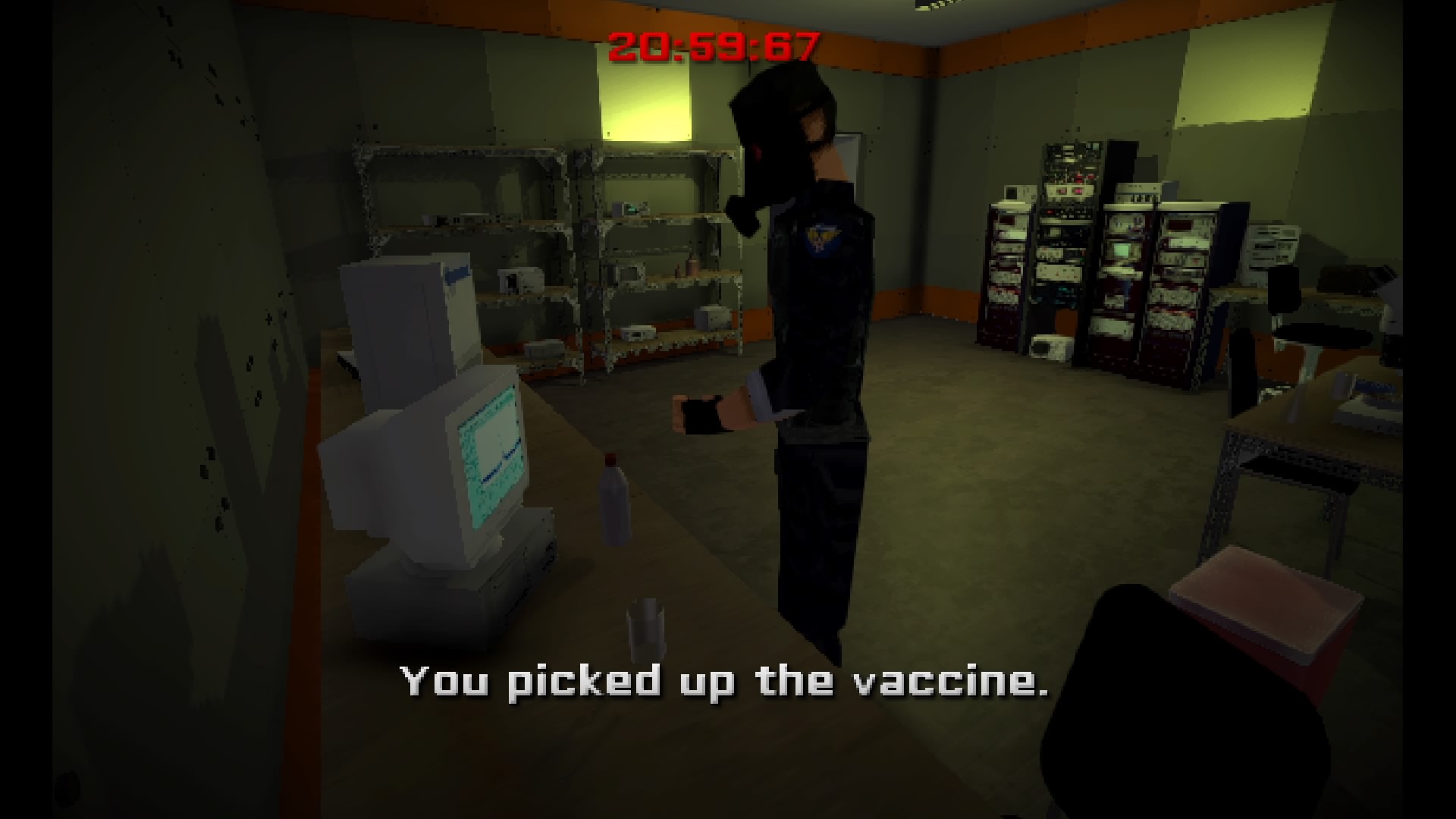 With Resident Evil 7 recently releasing the original games have been on my mind. They were fantastic games, maybe a little difficult to experience for the first time now, but the visuals, atmosphere and adventure were all top notch and birthed ‘survival horror’. Just one look at the screens around this page will show you that Vaccine has taken more than a small influence from those 90’s classics but this is running on a PS4. 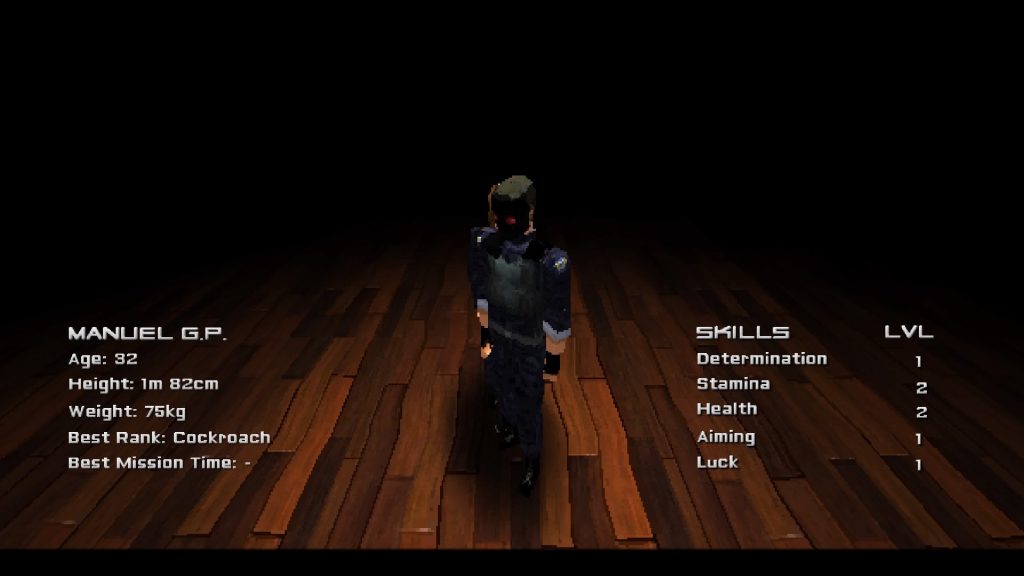 Upon loading the game you’ll be greeted by a low resolution title screen. This is on purpose, the entire game is going for a PlayStation era aesthetic. Starting the game gives you the option of two characters, both from an ‘Umbrella Corp’ style squad, one male and one female with slightly different starting stats. When you select your character a low voice says ‘Vaccine..’, much like classic Resi. So far the illusion is holding.

“Despite all your efforts, your friend got infected again. Find a vaccine before the time runs out” is splashed across the screen and then the game starts. A timer of thirty minutes appears and you’re placed in a room with your ‘friend’ convulsing on a bed. On the floor is a knife and in the corner is a memo. Straight away the visuals, as someone who played Resident Evil back when it was released, are spot on. The enemy models are a little too primitive but a fixed camera (though there are some angles that move slightly) which switches as you move around and the pixelated items you can collect take you back to a simpler time.

As you might expect the controls are of the tank variety, classic Resi. I recommend using the d-pad rather than the analogue stick. Push forward and your character walks forward, regardless of which way they or the camera are facing, if you want to turn you have to press left or right to rotate your character. It’s a system that works with the fixed camera but may not sit well with those not accustomed to it. You press R1 to ready your weapon and cross to attack. Cross also examines things and circle allows you to sprint for a limited time.

Armed with the knife found in the first room you walk through the door into another room. You get one experience point for opening the door. There is a levelling system in Vaccine, you primarily get experience for attacking enemies which you can then use to level up Determination (attack/reload speed), Stamina (dictates how long you can run for), Health (how much damage you take), Aiming (how much damage you dish out) and Luck (improves the items you find). The game doesn’t tell you when you’re ready to level annoyingly, you just have to check it every now and then. 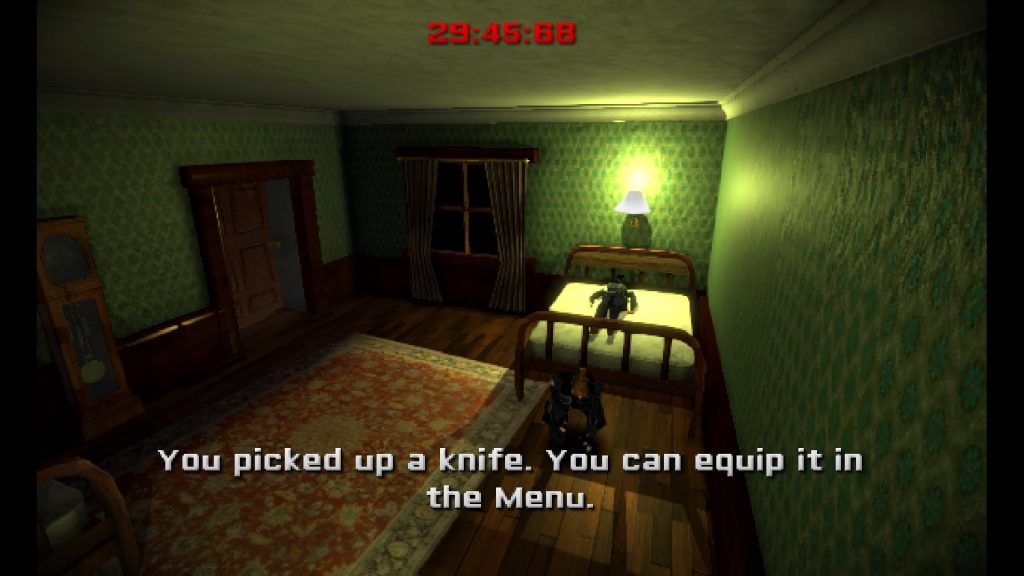 You move through rooms, looking for items, picking up ammo, med kits and new guns if you’re lucky. Then you encounter a zombie as it slowly walks towards you. You ready your knife, get a couple of slashes in and then it sinks its teeth into you. You push him off and get another couple of slashes in and it dies. You level up and continue exploring, maybe finding a gold or silver key to help you progress or a repellent spray to keep enemies at bay. You then encounter a ‘licker’ type enemy and it quickly slashes you to death. Never mind, let’s start over.

“Despite all your efforts, your friend got infected again. Find a vaccine before the time runs out”. A timer of thirty minutes appears and you’re placed in a room with your ‘friend’ convulsing on a bed. On the floor is a knife and in the corner is a memo. Hang on, the memo is different this time. Weird. You pick up the knife and head out the door again but this time you’re in a different room. This is a rogue-like. There is no saving, no progress carries over, you’ve got one run and if you fail you start from square one. The rooms, items and enemies are randomised from a relatively small pool of assets.

Okay then, no problem. You carry on as before but there are no zombies, you don’t find any guns, you encounter a ‘licker’ early on, you try to run but he never gives up and you die again.

“Despite all your efforts, your friend got infected again. Find a vaccine before the time runs out”. A timer of thirty minutes appears and you’re placed in a room with your ‘friend’ convulsing on a bed. On the floor is a knife and in the corner is a memo. Is this game terrible?

Well, no, not really. It’s incredibly reliant on luck, not your character’s luck stat but your luck, the player, the one you can’t upgrade without some dark arts. Zombies, bats or rats are all no real problem with the knife but if you encounter the licker-type enemies without a gun or repellent spray then you’re done as far as I’m concerned. If you run they follow, they attack faster than you and out damage you. If you get lucky and get the items you need then you can make a run of it.

Exploring, killing enemies, finding items, levelling up, eventually you’ll find a room with a ‘tyrant’-type enemy. He guards the titular vaccine. If you can kill him then he will reward you with a custom pistol which is very powerful, but more importantly you can collect the vaccine and return to your friend. Mission accomplished.

“Despite all your efforts, your friend got infected again. Find a vaccine before the time runs out”. A timer of twenty minutes appears and you’re placed in a room with your ‘friend’ convulsing on a bed. On the floor is a knife and in the corner is a memo. Twenty minutes now? Oh, I see.

You keep all your stats and your items but this time you only have twenty minutes to find the vaccine. Everything is jumbled up again but the same assets are used every time. Complete this one and the limit goes down again, and again, until you have under ten minutes to find the vaccine. Here’s the thing, the game is actually easier now. Because you’ve levelled up and have all the weapons with a decent amount of ammo the enemies aren’t a problem any more as long as you’re careful. You’ll continue levelling up and so will only become more powerful. The time limit however is very tight and isn’t reliant on your skill but, again, your luck. How big is the mansion generated? How complicated is it? Are the keys easily obtained?

My best run was halted by not being able to find a key and so running out of time. I’d been in every room, killed every enemy but could not locate the key for the life of me. Some nondescript pixels somewhere were a silver key and I couldn’t spot it. They flash now and then (again, classic Resi) but if it doesn’t as the camera happens to be looking at it then you may struggle to make things out. This could be classed as classic survival horror too but those didn’t have a tight time limit. They timed you but you weren’t expected to master it on your first go. A pulse move which flashed all items on screen would have been very useful or a map that stated there were still items to collect in certain rooms but maybe the developer considered this to be part of the difficulty. Any map would have been nice actually.

Other problems brought on by the forced historical accuracy are the camera angles hiding enemies, the lack of a quick turn (not brought in until Resident Evil 3) and a lack of auto aim (introduced in Resident Evil 2). These were obviously implemented on purpose and I can live without the latter two but running into a room and getting attacked instantly by something you had no way of seeing isn’t great in a game where death means starting over, and it happens often.

I’ve also had the game freeze on me (killed a bat as it attacked me and got stuck in the ‘it’s in my hair’ animation) and have heard of it happening to others which again will mean losing all your progress through no fault of your own. 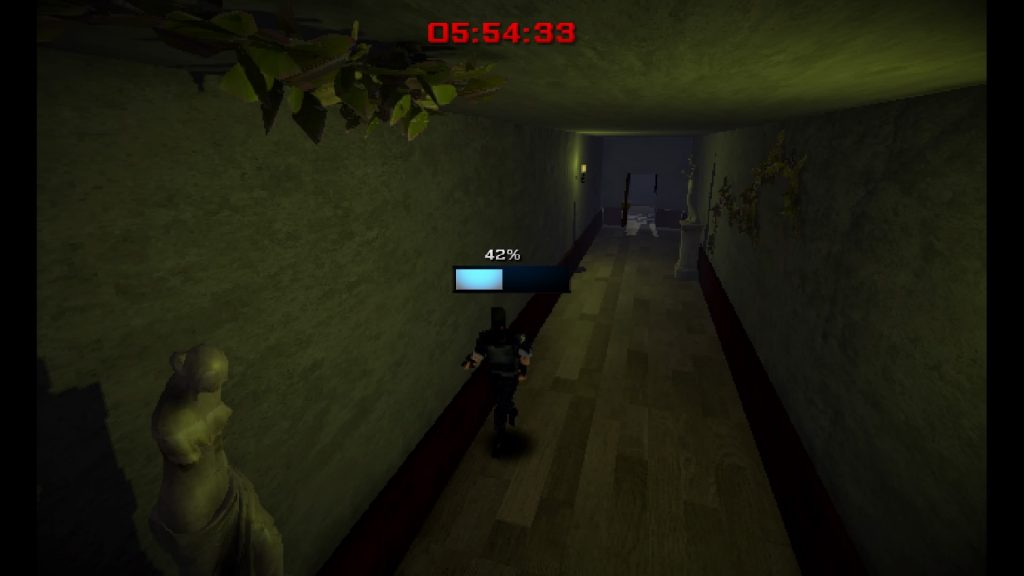 Ultimately though it doesn’t matter. Vaccine was made to be attempted multiple times and even if you do get through all the ranks it’ll only take about ninety minutes. There is an optional quest (with trophy) where you do some obscure objectives to stop your friend constantly becoming infected but this takes even less time and ends the game. At just under £10 it’s a little steep, but for a bit less and a lot of patience there’s a fun enough game here. Your success will rest solely on the randomness of the level generator but, despite not being scary at all, you will keep glancing at that timer as it ticks down, which generates its own brand of panic.

Vaccine
5 Overall
Pros
+ Gets the classic Resi look spot on
+ Levelling makes a massive difference
+ A decent run does feel good
Cons
- Success dependent entirely on luck
- Not much in the way of enemy or location variety
- Certain historical accuracies should stay in the past
Summary
Vaccine gives a good initial impression for fans of old school survival horror, but a bad first impression gameplay-wise. Stick with it enough to achieve a good run and you might just see the appeal, but it will depend entirely on luck rather than skill.