Unto The End from developer 2 Ton Studios and publisher Big Sugar, ported  to consoles by Stage Clear Studios. It’s a cave-em-up with its own unique challenges.

As the disclaimer at the outset of the game says “Unto The End is different. Set aside any expectations or assumptions. Combat is deliberate. You can lose your sword, run out of supplies, and bleed to death. Reading, reacting, and staying calm are vital.”

Unto The End is different alright. Firstly it’s dark. So, so dark. Look at this screenshot. That’s mid-fight when you get disarmed of both your sword and torch. Fair enough you’re in a labyrinthine cave system so that’s to be expected. We made the mistake of first playing on a sunny day. It didn’t go well. We found ourselves squinting like crazy even with all the curtains drawn. Though matters didn’t improve that much when we played at night. 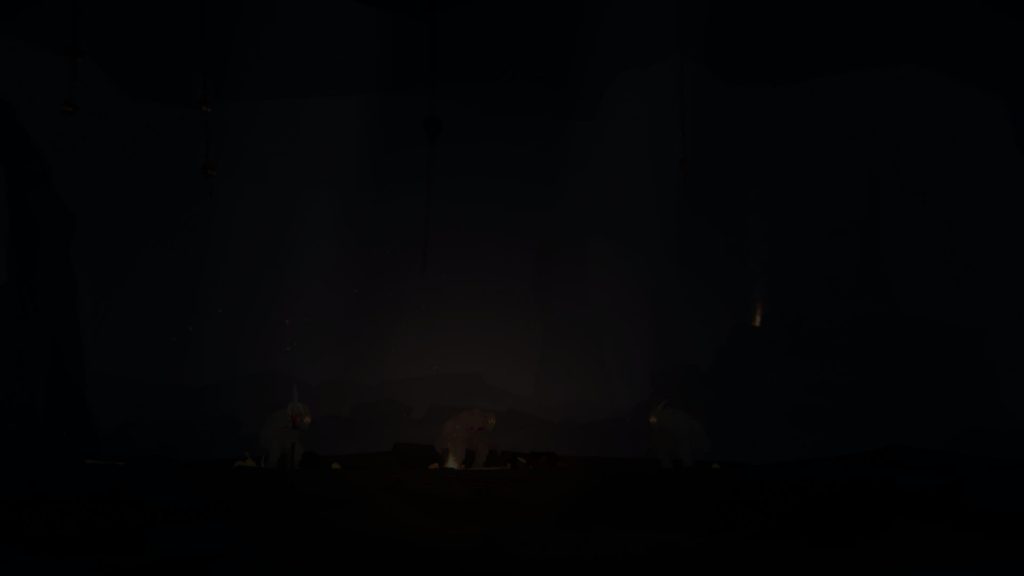 Unlike the likes of Below, there’s very little in the way of naturally occurring light. Your only light source is often a torch you have to fashion yourself from your precious resources. Even then a layer of parallax scrolling in the foreground often leads to your view being obscured. Never mind that you often won’t know if there are any resources to gather. Invariably we found ourselves spamming L1 to gather whatever we could. It’s the exploration equivalent of exploring a Wolfenstein 3D level hammering the spacebar to find hidden rooms.

Combat is a high point in Unto The End. You have to react to your opponents attacks by blocking them and attacking when the time is right. The lesser enemies will fall swiftly, but things will go south very quickly if you don’t pay heed to your training. Mindlessly slashing will only get you so far. Usually it’ll get you a black screen and another reload. 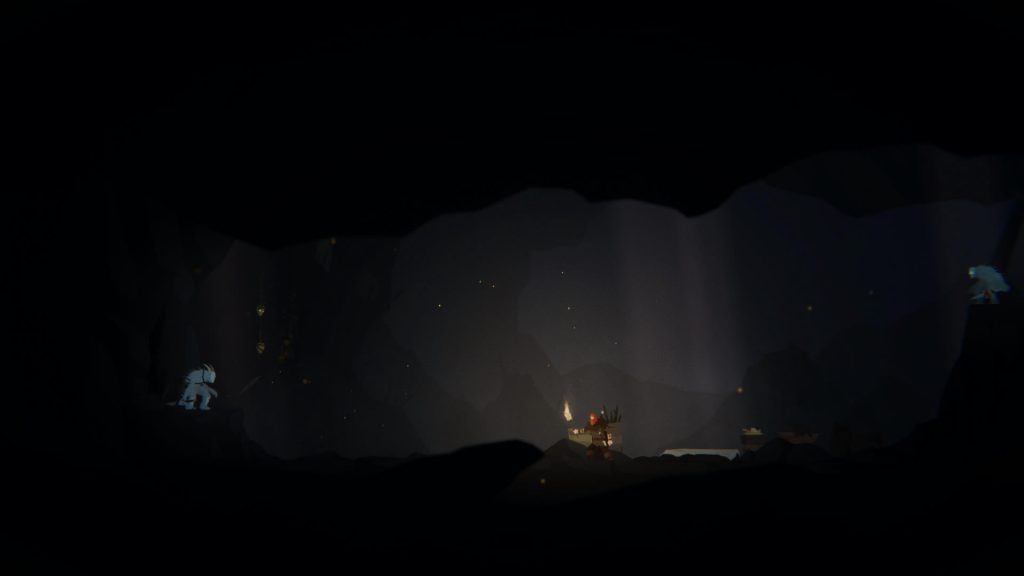 It’s fine until you face more than one enemy. In isolation you’ll generally see them off. But after a while, even if you are careful you’ll end up facing multiple enemies. In conjunction with the darkness, you’ll struggle to see them off without succumbing at least once. Two is just about manageable, but three often feels like a step too far. Combined with the fact you can find yourself disarmed as well as losing your torch, you’re going to die. Again. You can retrieve your weapon with L1 but you’ll be vulnerable in the meantime.

Even the trolls that can one-hit you are easy in comparison. At least with them it’s a case of well-timed attacks, ducking at the right time and rolling until you prevail. We had far more trouble with standard enemies. 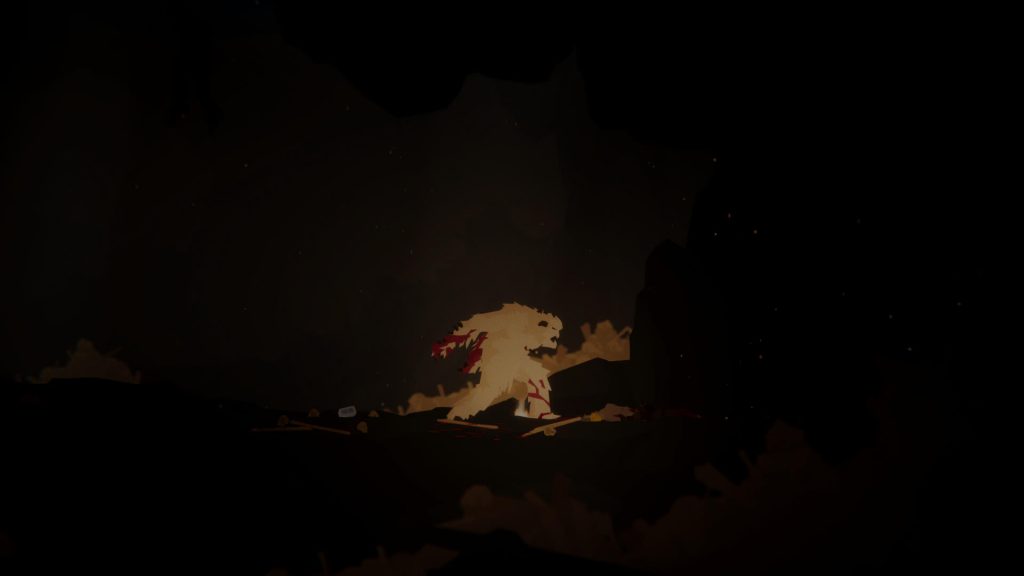 There’s fairly frequent autosaves, but you can only heal your wounds and craft potions and repair your armour at campfires. This is especially critical when you’re subject to a bleed effect. You can stave off a bleed a little bit by eating herbs, but you’ll eventually succumb unless you reach a campfire. You can also go into training at a campfire to brush up on your swordplay, we’d recommend you take the opportunity to do so. The more you commit the techniques available to memory, the better. Plus the fact there’s a trophy for beating your training partner too. 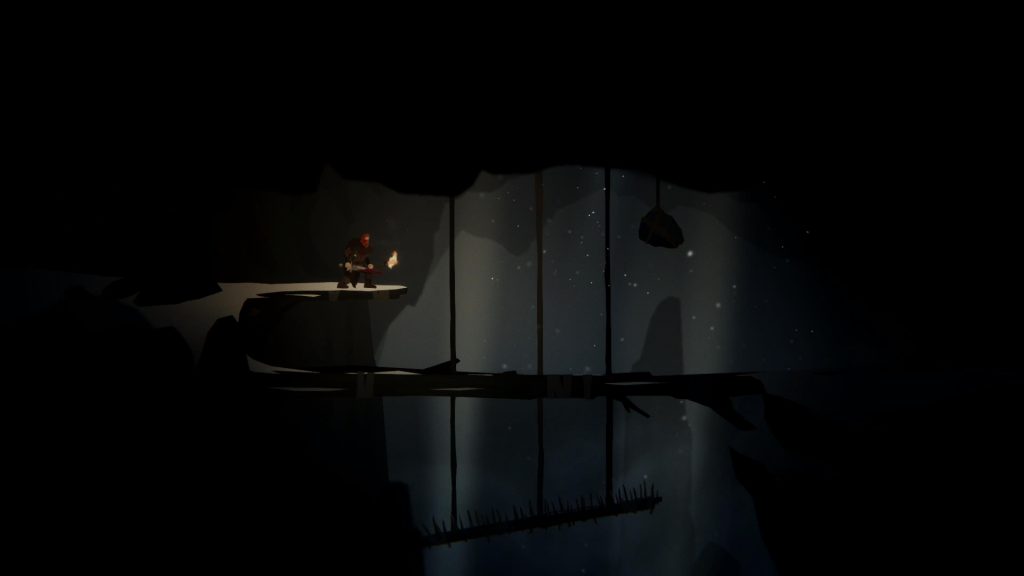 We come away from Unto The End feeling a little ambivalent. On the one hand, we can appreciate the craft and sheer nuance put into the combat system. But on the other it’s just so damn dark and unforgiving that we’re almost reminded why we don’t personally play the Soulsborne games. It’s far too easy to be overwhelmed by multiple enemies and the whole being disarmed mid-fight makes the already challenging combat feel like a thankless task.

If you can get past the unrelenting darkness and harsh combat, Unto The End is probably right up your street. For us though, it sometimes feels like a misery simulator. Despite that, we feel compelled to battle on.

Unto The End
8 Overall
Pros
+ Combat system has excellent nuance
+ Genuinely oppressive atmosphere
+ When you get past a tricky group of enemies you’ll feel so relieved
Cons
- Unrelentingly harsh at times, the bleed mechanic stands out
- So dark as to be unplayable in anything other than a dark room
- You’re probably going to die more often than in a Soulsborne
Summary
Unto The End is a subterranean explore-em-up with combat that some may find too harsh. Despite our dying more than we’d care to mention, we feel compelled to continue.