There isn’t a lot to be said about Untitled Goose Game that hasn’t been said before.  Developed by Melbourne-based developer House House, it was initially a Switch-only joint with regards consoles. It felt like being a 360 owner during the heyday of PS3 stuff like the first three Uncharted games or The Last of Us. OK, maybe not as acute as that, but certainly similar in terms of that stupid acronym FOMO applying.

Either way, Untitled Goose Game has now made the leap to PS4. The schtick is you’re a goose. Geese are generally seen as dicks, especially so if you’re a fan of Regular Show like this writer. Sadly there’s not a bunch of baby ducks to see you off. The domesticated goose you portray is among the most aggressive of all poultry, you’re no exception. All honk and wing flapping douchebaggery. 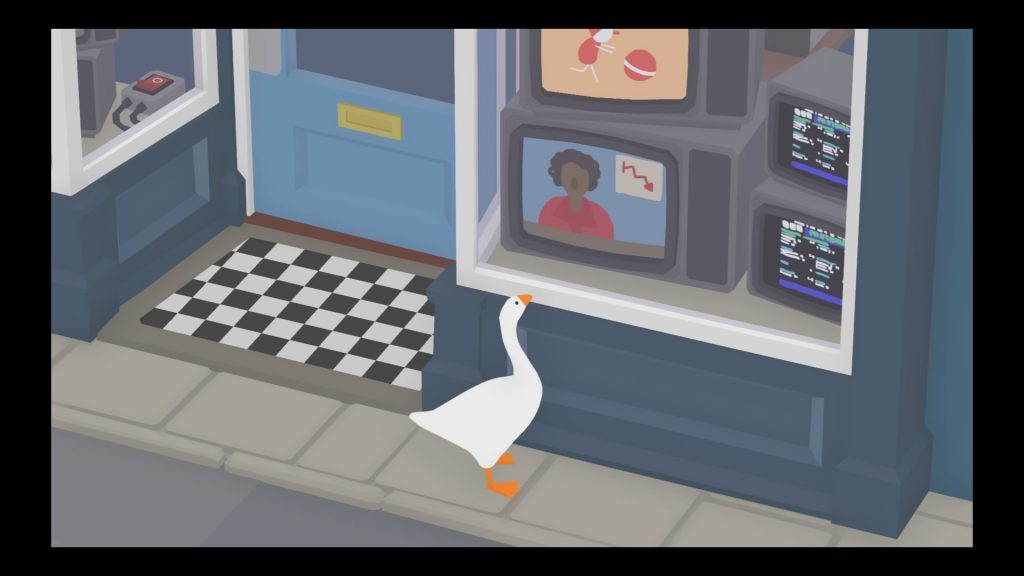 Your task is to annoy the denizens of a snapshot of middle England from an indeterminate nostalgic time period. Going by the giant video camera and teletext visible in the TV shop you’re probably looking at mid to late eighties. From our point of view, all that’s missing is a constantly scabbed knee and a 10p bag of sweeties.

We’ve seen it suggested that you’ll gain some cathartic satisfaction from imagining the adults are Brexit voters, but we’re taking a different view. For us, the villagers are the flabbergastingly stupid politicians in charge of Australia. Every honk is a middle finger to their boneheaded insistence that the bushfires currently burning vast tracts of Australian land aren’t anything to do with global warming. The victims probably voted Green? Though one middle aged arse in a garden has something of the UKIP member to to him. One racist old fuckwit is indistinguishable from another after all. 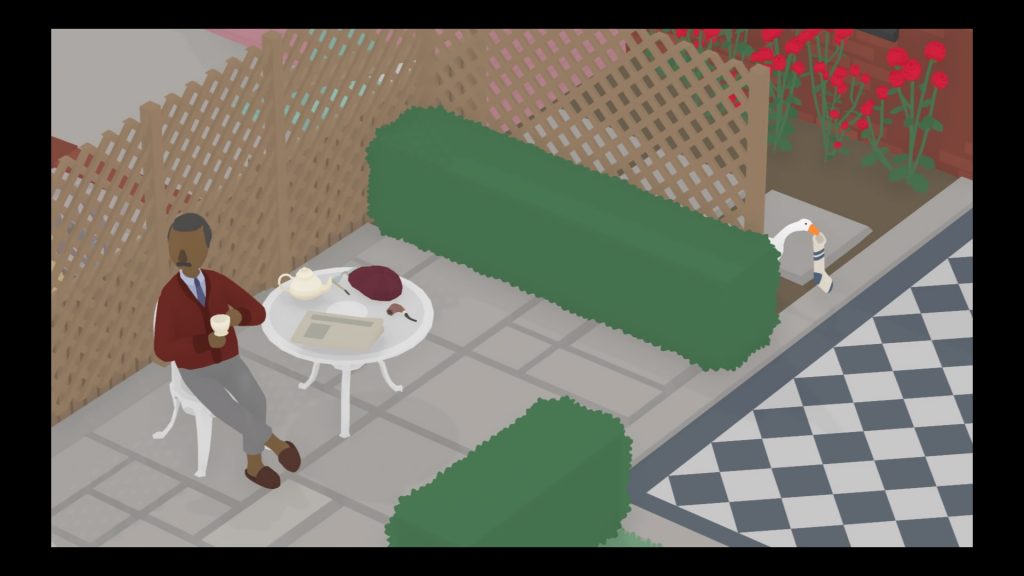 Untitled Goose Game could well be seen as a post-modern reflection of a failing capitalist society then. Perhaps we’re reading too much into it, but whatever. It’s our review and people have already bought this in droves. House House having successfully delivered the most successful antipodean indie game since Hollow Knight.

The goose is a prick but it’s fun to be the anti-hero of sorts. The goose animation is fun as is the reaction of the villagers to your goading. Stealing not-Farage’s slippers and chucking them in the pond is amusing because who wears slippers beyond grumpy old men anyway? Tch. 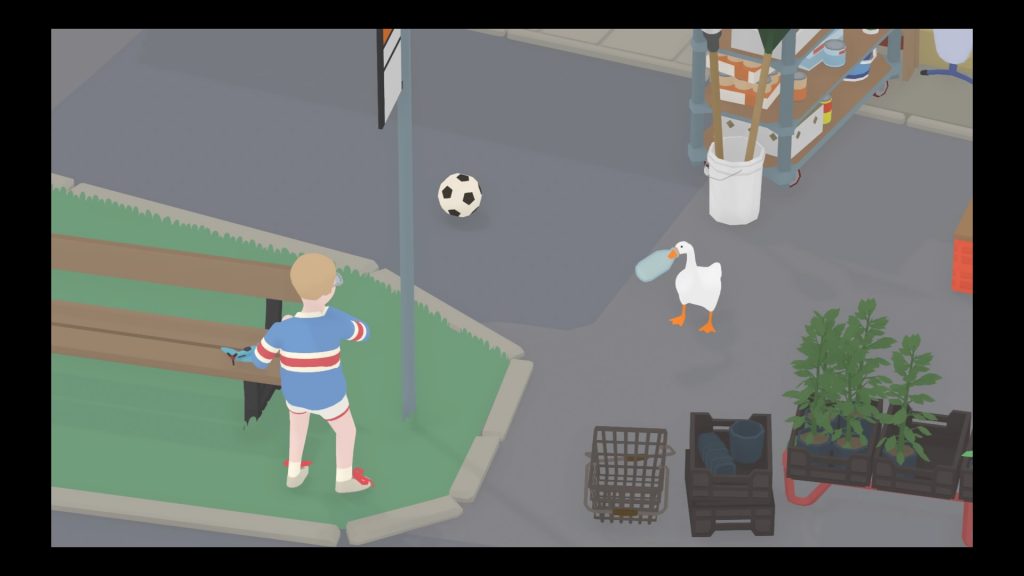 You have a list of tasks to carry out in each of the four sub-areas. First up is the market garden. Our five-year-old thought “Put the rake in the lake” was legitimately the funniest thing he had ever seen. The humour is definitely geared to the slapstick side of things, but that’s by no means a bad thing. There soon follow the high street and back gardens. Your reign of terror concludes at the pub on the village green.

If it sounds slight, then it probably is. But on top of your first playthrough there’s a wealth of extra objectives to unlock, such as opening an umbrella inside the TV shop. It makes sense in context anyway. Also for the trophy whores out there, there are time trial trophies to unlock by meeting objectives quickly. The slightly wayward controls don’t help that much in terms of expediency, but geese aren’t exactly the most dextrous creatures though we suppose. 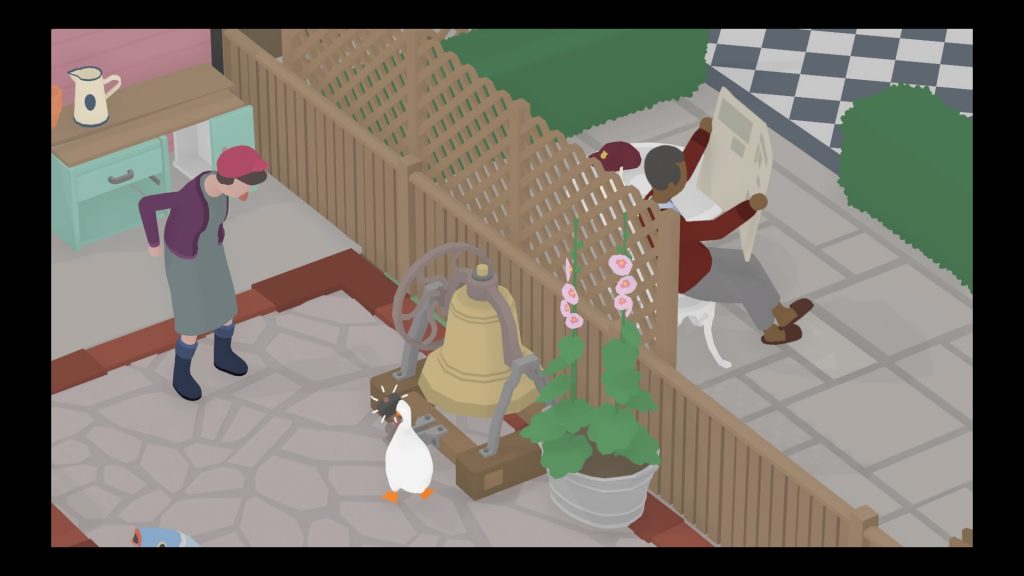 The music is nice and plinky low key piano which increases in cadence along with your speed. It feels a little secondary to the goose all the same. But a nice touch anyway.

In conclusion, a populace gets the government it deserves, just as the gaming world gets the hero it deserves. A prick of a goose is the perfect embodiment of all that festers beneath the surface of gaming such as it is. Untitled Goose Game is alright. Just alright. It’s funny and frustrating in equal measure.

Untitled Goose Game
7 Overall
Pros
+ Being a dick of a goose is fun for a while
+ Sense of place is tangible
+ Teletext in the wild
+ Dynamic music is well done
Cons
- A bit of a one note novelty. Honking goose? HILARIOUS. If you’re five maybe.
- Perhaps a bit short
- Controls not the most responsive
- Some tasks prove elusive at first attempt
Summary
Untitled Goose Game is a fun enough game but maybe a little on the slight side. Being a nihilistic goose is alright but that’s all there is to this really. Any representation of teletext in games is a good thing though.