Visual novels just don’t stop coming. It’s not a genre I’m especially enamoured with but it’s been fascinating to see the genre transform over time. After plenty of development time and a successful kickstarter, Undead Darlings: No Cure for Love has finally come to fruition. Mr. Tired Media are mixing the traditional visual novel with dungeon crawling and the end result does try something interesting. 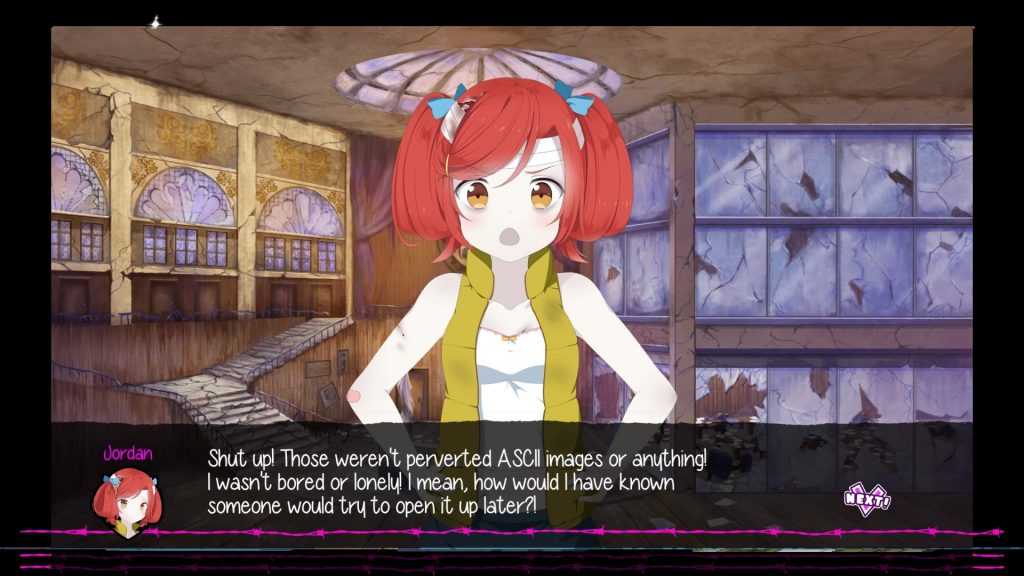 Undead Darlings: No Cure for Love begins with our protagonist, Reggie Happenstance being awoken by his friend Pearl. She’s a zombie now, courtesy of an unfortunate outbreak that seems to have affected everyone but our hero. Luckily, Reggie’s Dad allegedly knows how to synthesize a cure so the gang set off on a cross-town trip to get the ingredients together. It’s a fairly dumb premise but the charm starts to arrive thanks to some good interplay between the cast.

The plot doesn’t tend to focus much on the bigger picture and instead looks at character relationships. Some of it is predictable with the girls talking about body image, shopping and the stereotypical mush visual novels trade in. There’s good moments though and anecdotes that really help portray people that know each other. The cast is a little thin on dudes with Reggie’s only male companion being Buck. Buck’s a terrible character. He’s a fairly by-the-numbers Southern type who leers at the girls and trades mostly in sarcasm. Reggie’s a lot more toned down and it makes Buck stand out. He serves a purpose as an inventory manager and hands out battle tips but I can’t stress how little I like hearing him talk. 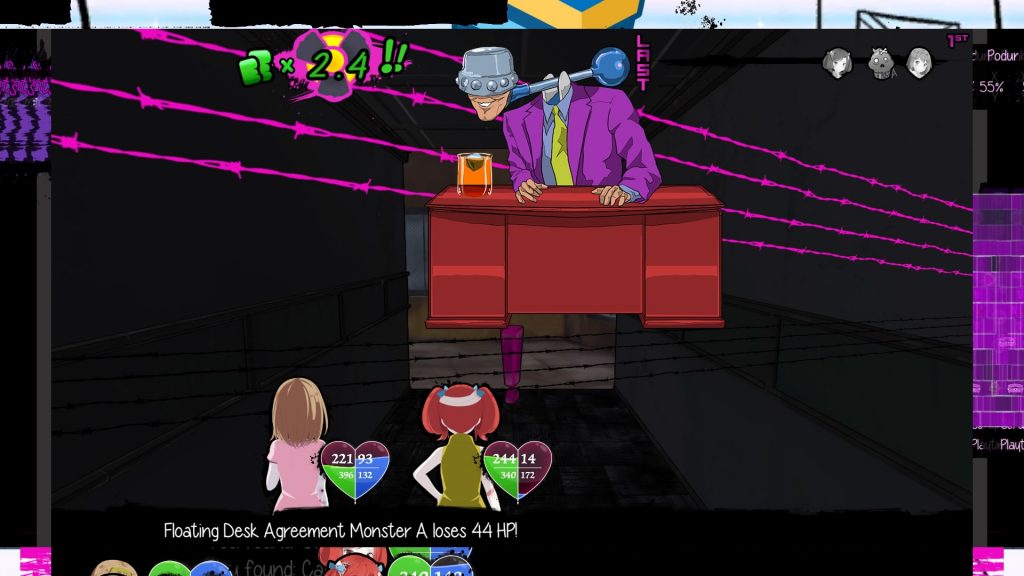 The narrative probably takes as long as a standard visual novel but it does feel more gently delivered with the dungeon crawling breaking it up. I’d say this feels more like a dungeon crawler first with the amount of time you spend battling. Gameplay takes on a fairly simple approach with your party progressing through floors of a grid-based dungeon. You wander through looking for items, weaponry and side-stories to flesh out the bond between you and your party members.

At first glance, it’s tonally looking to Earthbound for inspiration. Enemies are wacky representations of mundane items, professions or animals. I’ve fought ashtrays, solicitors and a Rastafarian bipedal robot. Enemy design is delightful and the time in the dungeon is mostly colourful. Battling is turn-based with each person having the ability to use physical or skilful magic attacks. As an RPG, it’s not looking to buck many trends but it does have some ideas at play.

Undead Darlings: No Cure for Love plays with elemental affinities a lot and striking against these is beneficial. Finding an enemy’s weakness boosts a damage multiplier and, should an enemy find your weak spot, this can be reset. It can be satisfying to execute a fight flawlessly but it does lead to some of the bigger fights becoming a drawn-out tug of war. The girls can team up for special attacks and, should the crawling become too much, you can create macros to manage the fights for you. 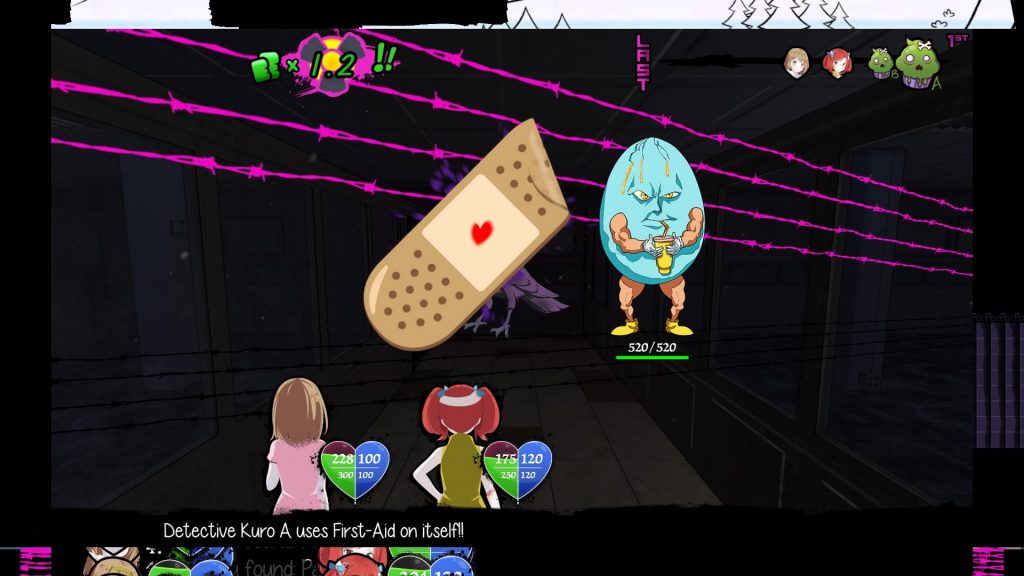 There’s an unfortunate realisation that the dungeon crawling can become tedious. There’s a grind I couldn’t avoid engaging with during the first dungeon. It’s smaller than the others at just two floors but the boss feels definitely out of my league on the first encounter. The enemies are fairly simple to deal with so the bosses deliver a real step up in difficulty. Encounters are random but weaponry degrades with use. I’ve never been a big fan of weapons breaking and it means you can’t stay within a dungeon and grind to your heart’s content.

When outside a dungeon, Buck’s true purpose comes to light. Your inventory space is limited so you’re often leaving the dungeon to deposit goods with him. You can also turn excess items into scrap which will bolster your weapon degradation or increase your inventory space. I gravitated to the latter early so I could grind for longer. Items respawn when you enter a dungeon and I find physical weaponry isn’t as effective as magic.

As a dungeon crawler, it does heavily favour repetition. You have to really enjoy grind and Undead Darlings: No Cure for Love‘s systems all lead you towards back-and-forth visits to dungeon locations. There’s not a lot outside combat to do, either. You have switches to activate and keys to find but, despite having plenty of space to play with, you’re spending the majority of your time clashing with enemies. There’s a handful of dungeons in total with the game taking 20 or so hours before the credits roll. It leads to hours spent in the same locales so you really have to enjoy the combat. I found it grating and a little strung out. 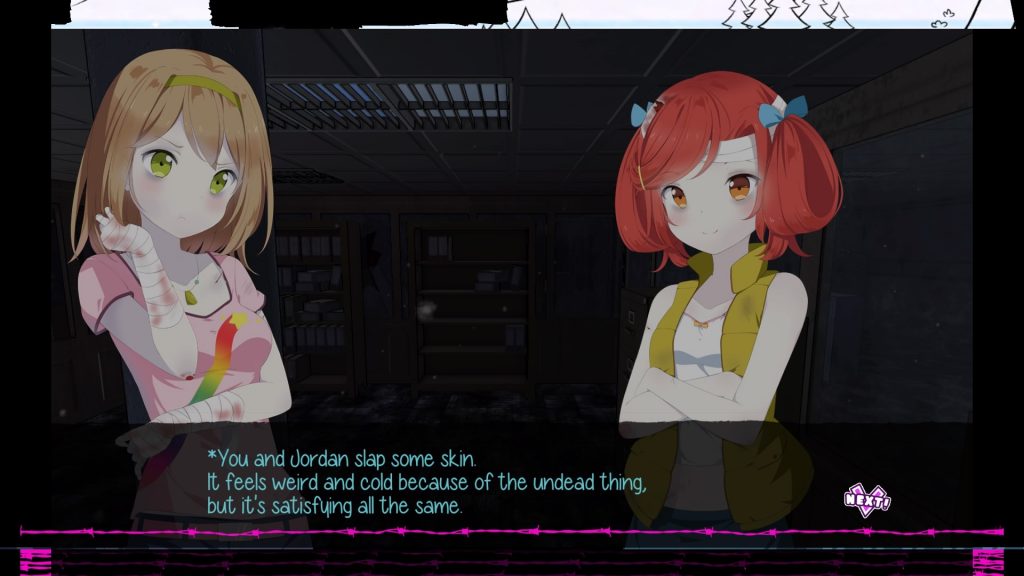 Presentation keeps things colourful and fairly cheery. The portraits and backgrounds are fairly standard anime fair but the dungeons have some colour and each locale has a different look to it. The 8-bit style loading screen is a nice touch with a smashing guitar drone accompanying it. I find some of the music to be overpowering, especially Buck’s theme. It has a nice, inoffensive look and the enemy designs go a long way to providing real character.

It’s a pity the dungeon crawling doesn’t pick up the pace. Having to exit and re-enter to refresh weapons, open up inventory slots and regain health really takes the wind out of my sails. I would’ve preferred more locales rather than keeping you in the handful of dungeons for longer. The presentation feels nicely done and the writing can occasionally deliver some good character building.

Undead Darlings: No Cure for Love
6 Overall
Pros
+ Occasionally smart writing with plenty of character building.
+ The battles do have some intriguing mechanics and some depth.
+ Visually appealing with some charming touches.
+ Enemy design is fantastic.
Cons
- Dungeon crawling becomes very tedious at times.
- Some writing can really undermine the stronger moments.
- Some background music sounds overpowering.
- The dungeons feel poorly-paced with very little to do outside of battling enemies.
Summary
If I would recommend Undead Darlings: No Cure for Love to anyone, they'd have to be onboard with a very slow dungeon crawler. Whilst I do like the writing and some of the relationship building, it requires a fair amount of tedium to get to. Systems seem in place to lead your party into a hasty retreat when weapons break, inventory fills or a boss becomes too steep to beat. Outside of that, I find a game that's charmingly presented with some really nice touches. It's a shame the combat becomes such a time commitment.