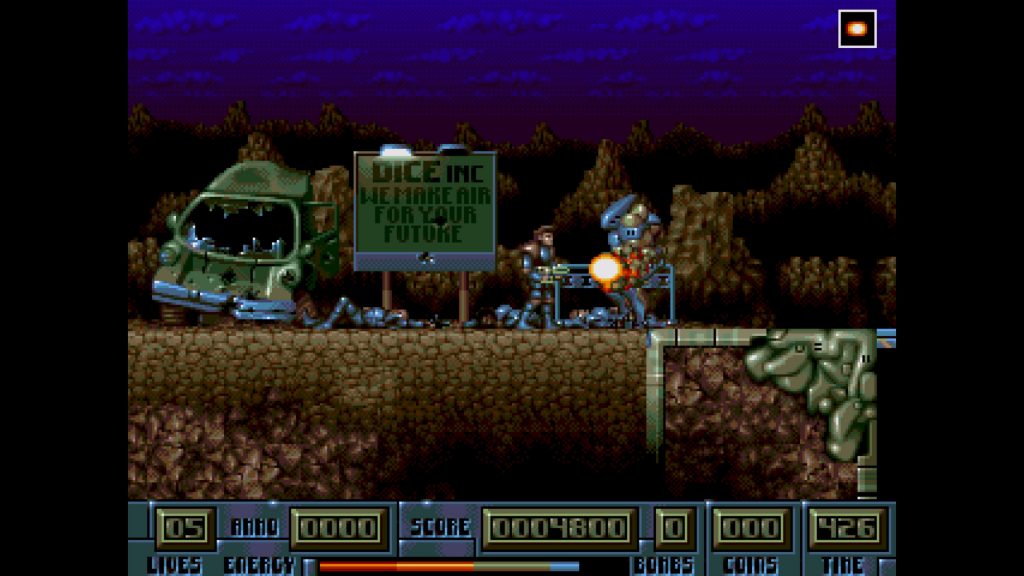 Of all the retro gaming trends to happen in recent years, one of my favourites has to be when publishers go searching for age old titles that never saw the light of day and finish the work of the developers and finally give the games the airing they may or may not deserve. A few examples of this trend come from the likes of Piko Interactive with their rescuing of the N64 port of 40 Winks, Nintendo releasing Starfox 2 on the Snes Mini and The Oliver Twin’s renovation of Wonderland Dizzy upon finding and finishing previously lost source code.

Ultracore is a release in a very similar vein. This game was originally slated for launch on the Mega Drive and Mega CD in 1994 under the name Hardcore by Digital Illusions (DICE) who were working with Psygnosis at the time. Despite the game being mostly completed, unfortunately it was considered a hard sell as fewer punters were willing to slap the cash down for a Mega Drive cartridge when the CD based consoles were looming. Not to mention, there was the complication of Psygnosis being brought into the Sony stable that put a stop to a lot of other console releases from happening.

At the time, Hardcore didn’t get much in the way of an airing. All we really had to go on were a few photographs in Sega Power, a short writeup and a few months of waiting to see whether anything happened. It certainly wasn’t the hype trains that we see now for similarly themed games, such was the cold charm of the mid-nineties. It’s legacy up until now was being another one of those releases that you would find in an old magazine and wonder ‘whatever happened to this?’. 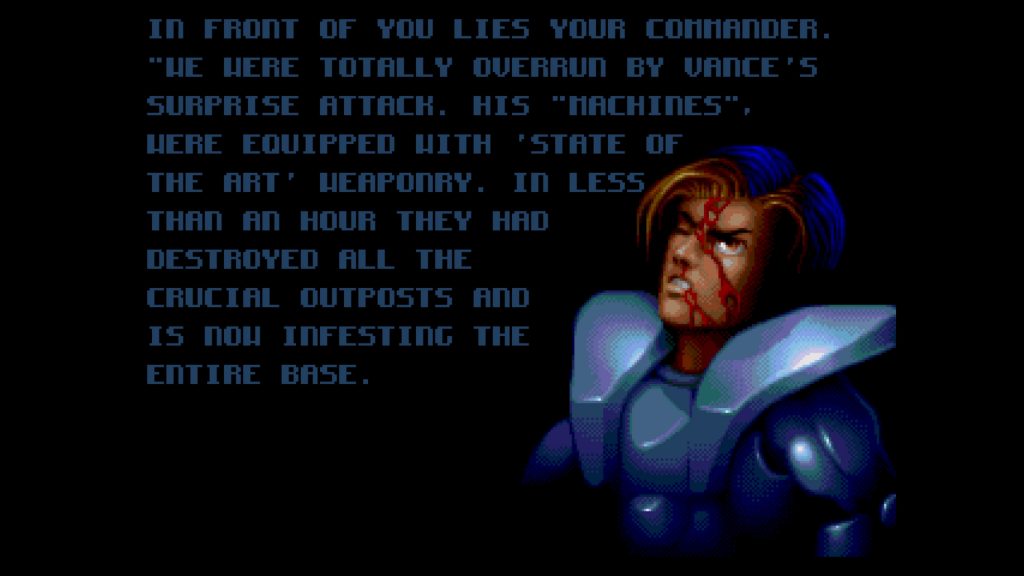 So, when seeing Ultracore release in 2019 on the Analogue Mega SG and then 2020 for modern consoles, I was tentatively interested. While the game looked somewhat formulaic for something from my formative gaming years, there was also a sense that I hadn’t seen a true retro title of this type for some time either. After all, nostalgia has this wonderful effect that can turn something quite generic into something amazing because of how much it reminds you of the good old times and you can’t get more retro or nostalgic than something that was designed in and for the era that you grew up in.

From the word go, Ultracore exudes the past glories and detriments that came part and parcel for the 16-Bit console era. You play as a lone marine as he is tasked with running and gunning through robot infested corridors to reach the exit with only the weapons you pick up along the way and a thinly assembled plot for company. The simplicity of the concept is exactly what would expect from a game of the era and a by-product of the retro sensibility that gameplay comes first over anything else and this is where the game excels.

Ultracore is very much your typical run and gun, but with some differences that set the game apart from its contemporaries. Notably, the controls allow for a pseudo 360-degree shoot and move method when played using traditional buttons, or fully realised twin stick control when used with the PS4 controller. It’s a neat and necessary aiming style which when mastered, makes for some very satisfying gameplay as being able to take on the hordes of robotic enemies from all angles at speed and accuracy should never get old. 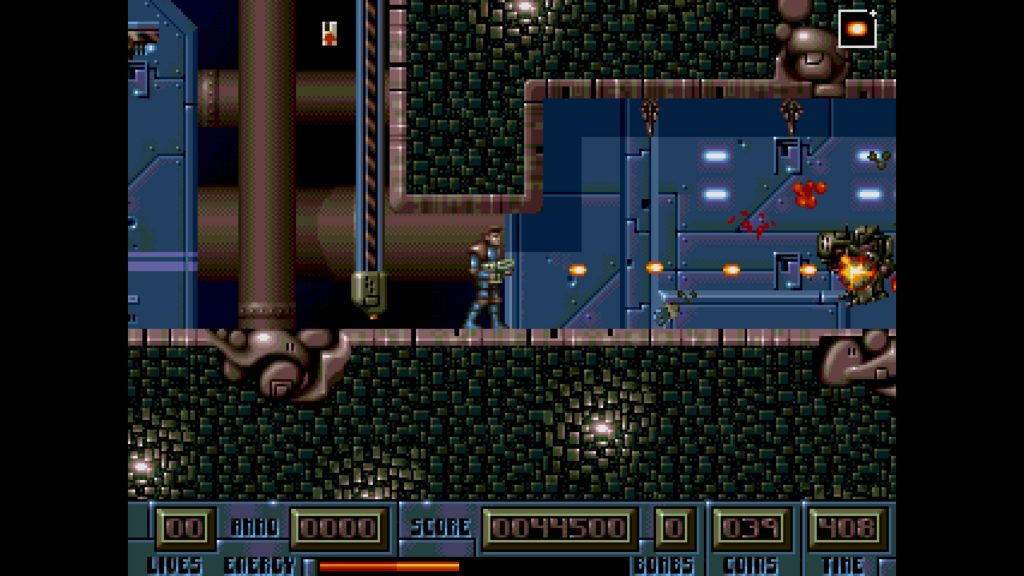 Each stage is a mini labyrinth of sorts, consisting of tech heavy backgrounds and non-linear corridors filled with robotic contraptions that want to ruin your day. These are far more involved than a usual run and gun as you must explore each stage thoroughly to get the most out of it, finding key cards, secrets and much needed health pickups as a reward for the keen explorer. The best items you can find along the way are the new weapon types which range from higher powered lasers to rocket launchers and scatter guns which make your life easier as you take on tougher foes. There are plenty of variety in these and each weapon gets better with the use of upgrade points which are scattered around that increase ammo capacity and damage dealt to enemies. The only sore spot being that ammo is quite scarce for these weapons and one-shot type can drain your entire reserves in a very short amount of time if you are not careful, limiting the use of these to boss fights often.

Of course, it wouldn’t be a game for the Mega Drive from 1994 if there wasn’t difficulty to the experience. Ultracore represents a challenge in several ways, but the most prevalent are within the enemy count, the continue mechanic and the odd difficulty spikes that make the experience seem a tad unfair at times.

When i say there is a lot of enemies, i mean almost too much. From the word go, you immediately get assaulted with corridors full of robotic contraptions that do nothing other than get in the way. They are all simple enough to defeat but some are just annoying, particularly the miniscule flying ‘bots that are hard to see amongst all of the background scenery and are nippy little blighters. 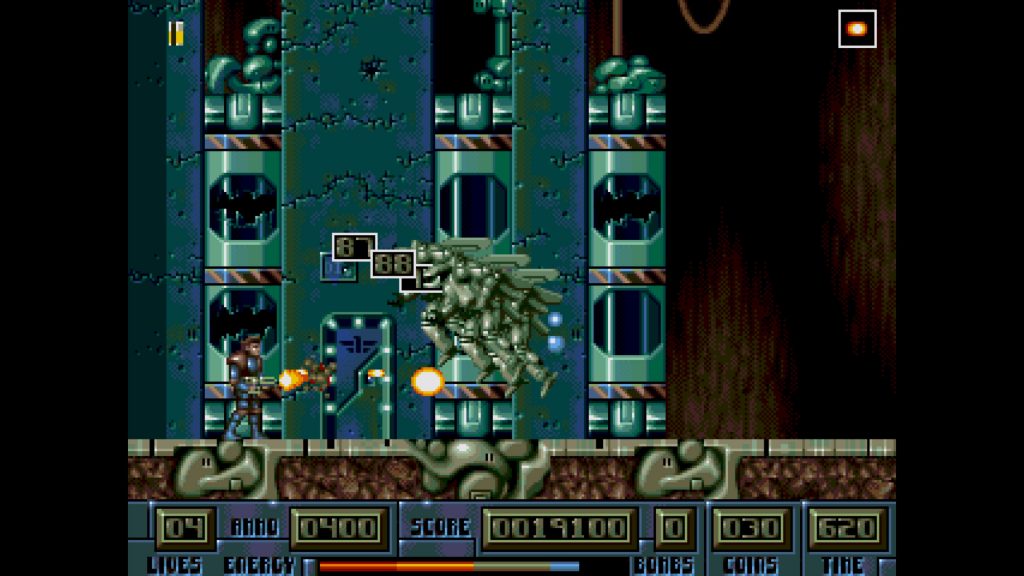 Getting hit by anything knocks you back a step also, which becomes infuriating when platforming comes to play and this is where Ultracore is a double edged sword of forgiveness. Deaths feel fine enough, with each of these respawning you right next to your death point, but these can rack up quickly resulting in a continue that knocks you back to the end of the stage. Run out of continues and you need to restart using a password which while was a common factor for games in the Mega Drive era, even in 1994 carts were being equipped with save features and battery backups. To not have a save feature for a modern rerelease just feels wrong now. There are a lot of people who love retro gaming, me included, but absolutely noone remembers this slog with fondness, especially when a passcode is sixteen digits long.

Despite Ultracore  being only five zones long, there will be plenty of returns to the passcode entry screen before you get through the first time. For me, this was as a result of frankly unfair enemy placement and long levels filled with instant death traps. As an example, i lost count of the amount of times that i activated an elevator and an unseen enemy just falls on me from above and there was a level with a crushing hazard which is impossible to clear on the first try. These pockets of difficulty and trial/error mechanics just lets the side down unfortunately, it would otherwise be an enjoyable challenge.

While i bemoaned some of the enemies being tiny specs against the background art of stages, i will say that for a game from 1994 on 2D hardware, Ultracore is a looker. It has that soft-prerendered look to it with stages and characters that look great thanks to detailed sprite art. Musically, the game is an absolute treat. In-game you have two soundtracks to play with, i played mostly with the Megadrive audio, but when switching to CD audio it was a whole different experience with songs laden with synthwave grandiosity and retro themed vibes. 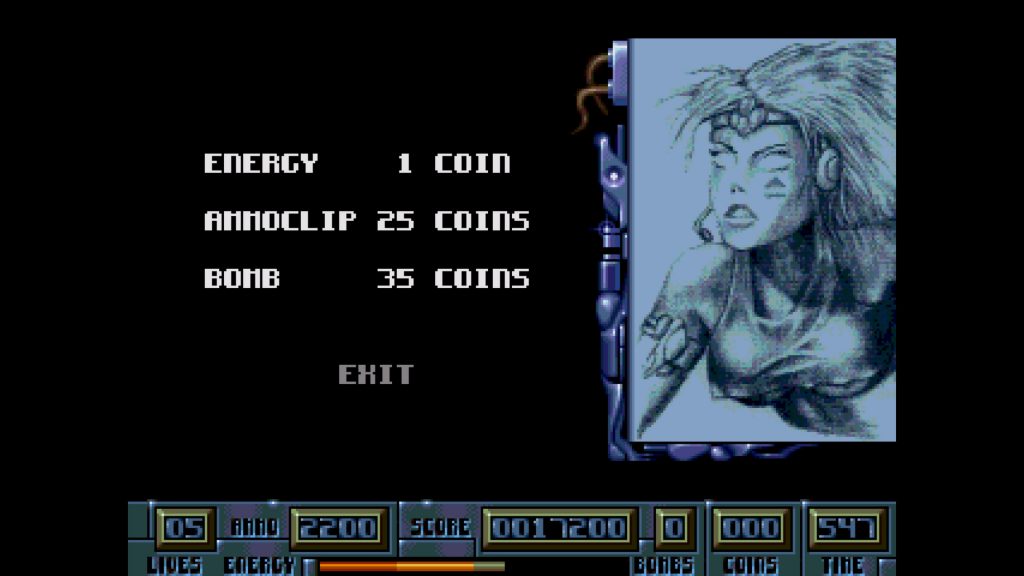 Overall, I would say that Ultracore  is a worthy ressurection. While it may not have taken the world by storm back in the mid-nineties if it did release, it becomes instantly interesting due to the story of developement and the rescue attempt made by the folks at Super Rare Games. This game is a genuine artifact of the era and something that is worth playing if you grew up with Sega’s 16-Bit offering. Just temper the excitement a bit as while it is good, it isn’t exactly Gunstar Heroes.

Ultracore
7 Overall
Pros
+ It’s great to see a lost Mega Drive release get a second chance to live
+ Excellent soundtrack, particularly in CD mode, but none too shabby with the Mega Drive soundset either
+ The twin stick control system is well implemented
+ Good level design
Cons
- Would be considered formulaic considered to other great Mega Drive games
- Ultracore features lot of trial and error in the gameplay
- No save feature/ password only should have been left in the past
Summary
After spending twenty six years stewing in a dark vault, Dice's lost 16-Bit shooter now gets the airing it deserves. Ultracore is a worthy run'n'gun retro experience with some great visuals, music and gameplay. Yet, some aging aspects of the game do get in the way of a good time and demonstrate reasons why this game was lost for so long in the first place. While it can frustrate, it is still one i would recommend to play if you grew up with the Mega Drive.